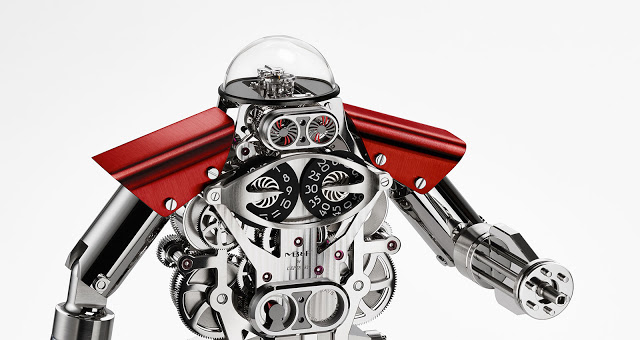 Joining fellow luminaries of independent watchmaking like F.P. Journe, Voutilainen and De Bethune, MB&F has created a one of a kind variant of the Melchior clock for Only Watch 2015. It’s distinguished by its red should plates (the regular edition is in black or silver), made of anodised aluminium and modelled on the colours of the flag of Monaco, where Only Watch takes place.

Conceived by MB&F and Swiss-based Chinese designer Xin Wang, Melchior is made by L’Epée 1839, a Swiss clockmaker better known for its old fashioned carriage clocks and also the maker of the MB&F Starfleet Machine clock. The time is indicated via two discs on its chest, jumping hours on the left and sweep minutes on the right, while the retrograde seconds are the eyes of the robot. Melchior is made of palladium-plated brass, with the gun-shaped left forearm actually a removable key to wind the movement, which has a 40 day power reserve. A glass dome on its head reveals the balance and escapement of the movement. Originally limited to 99 pieces, Melchior makes its curtain call with the Only Watch edition, the 100th and last clock made. It will be sold alongside 42 other unique timepieces on November 7, 2015 in Geneva, with proceeds going to fund research into Duchenne muscular dystrophy.

Phillips has just announced the Melchior Only Watch, a unique edition of MB&F's robot clock with red shoulder plates, for the Only Watch charity auction in November 2015.