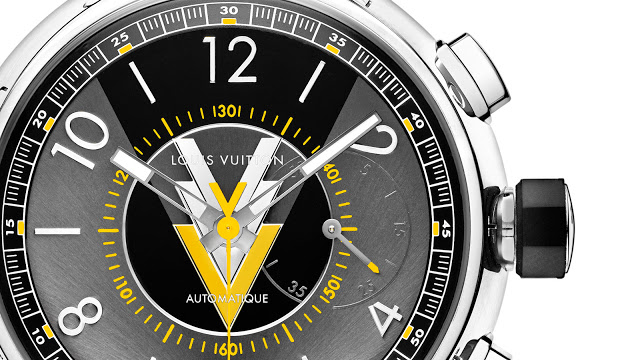 Inspired by an ad campaign from the 1960s unearthed from the Louis Vuitton archives, the Tambour VVV uses the triple V motif as the tricolour oversized central hand on the dial. Short for “Volez, Voguez, Voyagez avec les valises Louis Vuitton” – meaning “Fly, Sail, Travel with Louis Vuitton suitcases” – a tagline from an advertisement used in the 1960s, the triple V motif is now a recurring theme in Louis Vuitton clothing and accessories designed by its Men’s Artistic Director, Kim Jones. It now makes it debut in Louis Vuitton wristwatches with the Tambour VVV. A large triple V hand is the main element on the Tambour VVV line that includes a GMT, Chronograph and Spin Time GMT. The typical position of chronograph hands is inverted on the Tambour VVV Chronograph, with both the elapsed minute and seconds hands resetting to six o’clock. A tricolour triple V hand in silver, white and yellow is the central elapsed minutes hand, while the yellow elapsed seconds has a V-shaped counterweight. And the top of the line Tambour VVV is the Spin Time GMT. Offered only in white or rose gold with a diameter of 44mm, the Tambour VVV Spin Time GMT features a rotating cube display for the second time zone. Invented by Michel Navas and Enrico Barbasini of La Fabrique du Temps, a movement specialist now owned by Louis Vuitton, the Spin Time mechanism relies on 12 Maltese cross gears to turn the cubes on the dial. Pricing is not yet available for this.

The Tambour VVV will hit stores in September 2015.

Pre-Basel 2015: Introducing The Louis Vuitton Tambour éVolution In Black (With Specs And Prices)