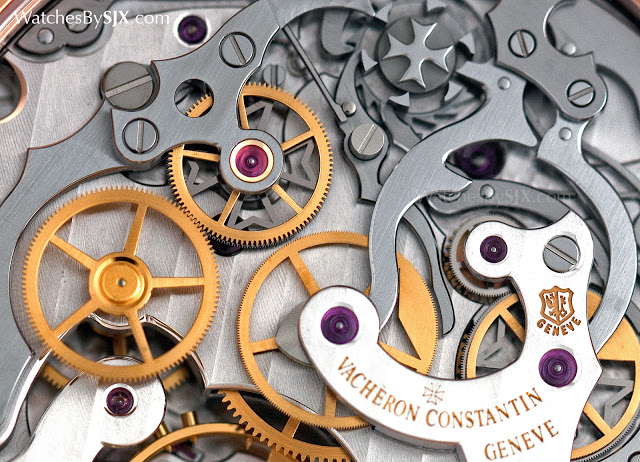 Patek Philippe has the impressively constructed CH 29 while A. Lange & Söhne introduced the gorgeous L951 movement found in the Datograph some 16 years ago. Vacheron Constantin, however, relied on the Lemania-derived calibre 1141 since the 1980s – until SIHH 2015 when the calibre 3300 came along in the new Harmony Chronograph. Modelled on a 1920s doctor’s watch, the Harmony Chronograph is a 260-piece anniversary limited edition (one of several made for the anniversary). It features a pulsometer on the dial, as well as a power reserve indicator at six o’clock. Next year will see the introduction of the regular production Harmony, equipped with the same, but less elaborately decorated, calibre 3300. Beyond the standard features, the calibre 3300 is also a mono-pusher chronograph, with a button co-axial with the crown for start, stop and reset. And it has a 45 minute counter, instead of the more common 30 minute register. At just under 33mm in diameter, the calibre 3300 is a rather large movement (the Patek CH 29 is only 29.6mm wide), with an unusually large balance cock. For the 260th anniversary limited edition the balance cock is hand-engraved with a floral fleurisanne motif that will be absent on the regular production Harmony to be launched in 2016. Interestingly levers of the chronograph mechanism are rather wide and flat, a style of construction also found in the Lange 1815 Rattrapante Perpetual Calendar. This helps reduce the height of the movement, which is still 6.9mm high. That is slim but not exceptionally so, putting it in somewhere in the middle compared to the competition. The construction, combined with its diameter, gives the movement a spaced out appearance with lots of flat surfaces. While the calibre 3300 lacks the spectacular three-dimensional aesthetics of other chronograph movements (the Vacheron Constantin calibre 3500 is a good, albeit much more expensive, example), it does offer visual appeal, like the Maltese Cross-topped column wheel. The finishing is excellent, as is expected for Vacheron Constantin and at this price. Up close it is not quite a spectacular as the Lange Datograph movement. And the Patek CH 29 appears to have a slight edge as well. While the Harmony Chronograph and the calibre 3300 inside are both very, very good, one can’t help but feel the movement could be better. Price-wise the Harmony Chronograph 260th Anniversary limited edition is competitive, retailing for US$75,300 or S$105,600, about the same as the pink gold Lange Datograph but less than the Patek Philippe Ref. 5170.