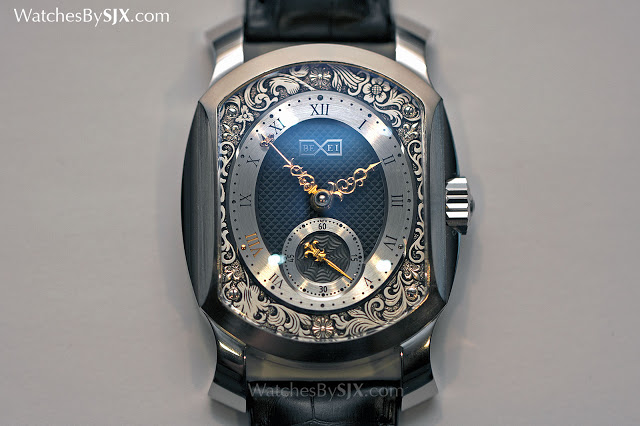 Made from scratch by hand, the Bexei Dignitas Pure is the work of Aaron Becsei, an independent watchmaker whose unique brand of work combines a Gothic aesthetic with elaborate movement finishing.

Based in Hungary, Bexei Watches is essentially Aaron Becsei, who crafts his timepieces quite literally from scratch. Having completed a triple axis tourbillon in 2008, Becsei’s simpler offering is the Dignitas, a hand-wound, time-only wristwatch with a unique aesthetic and a compellingly beautiful movement.

The watchmaking of Aaron Becsei

A quiet 36 year old, Aaron Becsei is a third generation watch and clockmaker, born into a family whose business was a clock and watch repair shop. After graduating from the School of Technical Sciences of Budapest, the Budapest native started working on creating his own clocks.

The Miniature Zappler was his first , a tiny pendulum clock standing just 35mm high, completed in 2003. And two years later he presented the Tourbillon No. 1 clock, boasting a tourbillon as well as calendar, world time, power reserve and thermometer.

Only in 2008 did Becsei finish his first wristwatch, the impressive Primus tri-axial tourbillon, becoming one of the few independent watchmakers in Eastern Europe (Russian Konstantin Chaykin is another). A year later he gained entry into the Académie Horlogère des Créateurs Indépendants (AHCI), the prestigious association of independent watchmakers that also counts Philippe Dufour and F.P. Journe amongst its ranks. And then in 2011 he unveiled the first Dignitas Power Reserve, a time-only hand-wound wristwatch with power reserve display. Since then Becsei has made less than 20 wristwatches, completing between three to four watches a year. He works alone at the bench, his wife handles the administration and marketing for Bexei Watches, and makes nearly the entire watch – save for the hairspring, mainspring and jewels – in his workshop, mostly by hand.

Becsei named his company Bexei Watches after the Anglophile pronunciation of his name, which is actually pronounced “bay-chay” in Hungarian (his Hungarian name is Aron Becsei). Bexei Watches essentially offers only two wristwatch models, the Primus triple axis tourbillon and the simpler Dignitas, but nearly every decorative and visual element of its watch can be customised. In fact, every watch Becsei has made so far is unique, with each featuring details specified by the owner. The aesthetic ranges from the Gothic style shown in the example below to simpler dial and hand combinations.

This Dignitas Pure was commissioned by a collector in Asia, with several elements unique to this watch, including the numeral “VIII” filled in gold and ruby cabochon in the crown. It has a white gold case. Most Bexei watches have gold cases in any of the three colours of the metal, but he has also made watches in platinum, and can work in other metals like steel or even silver. The double ellipse case was originally designed for the Primus tourbillon, and is now the signature shape for Bexei. A three-part construction (bezel, case band and back), the Dignitas case is substantial, measuring 37.5mm in diameter and 42mm long. The long lugs with concave sides echo the form of the case, but also emphasise its size. Because Becsei mills all watches cases himself, they have a solid, earthy form, without the finer details that can be achieved with state of the art equipment. The finishing is very well done, just like the rest of the watch. Made of five parts, the dial is gold, with an outermost segment hand-engraved by a Hungarian artisan. Becsei makes the whole dial himself, including the guilloche central portion. Instead of a traditional rose engine, Becsei rigged his own engraver to create the guilloche on his dials. All the markings on the dial are engraved and then filled with black lacquer. The Empire-style hands are gold-plated brass. Similarly in style to the engraved dial, they are exceptionally ornate and also made by Becsei. All the elements of the face are evidently hand-made, but executed with effort and skill. The movement Hand-wound with a 40 hour power reserve, the Dignitas is powered by a form movement shaped just like the case. Beautifully constructed and finished, the movement is fitted with a large, 14mm free sprung titanium balance wheel with platinum poising weights, as well as a pallet fork of Becsei’s own design. The bridges and base plate are uncoated German silver, with the characteristic silver-yellow tone of the material. Artfully arranged and shaped, the movement is a satisfying classical in its appearance, yet distinctive in form and detail. Every component is finished by hand, with all the fineness, beauty and blemishes (it’s character) that entails. While the Gothic aesthetics of the dial might not appeal to everyone, the movement is deeply attractive, both objectively and emotionally.

The Dignitas Pure (time-only model) starts at €38,500 in yellow, rose or white gold, while the Dignitas Luna and Power Reserve both start at €51,000. All Bexei watches can be customised, with prices varying according to the order. Becsei hopes to hire an assistant to help with the machining of parts and cases, which would allow him to boost production to about 10 a year. He can be reached via his website.