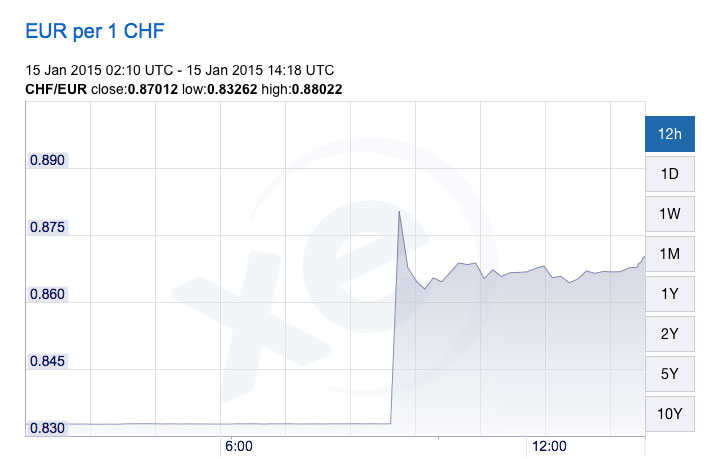 Reaction to last Thursday’s surprise move by the Swiss National Bank (SNB) has been panic in some quarters. The sudden strength of the Swiss franc will have an impact on watch buyers, but the consequences are unlikely to be as significant as some fear. A strong franc makes the production cost (and other Swiss franc-denominated costs) of watches made in Switzerland more expensive. Depending on the currency, the equivalent production cost of a Swiss watch in foreign markets is between 15% to 40% steeper with the newfound strength of the Swiss franc. But not all of that will translate into an increase for the end consumer since the production cost is far, far away from the retail price of a watch.

Another relevant factor is geographical price parity. Swiss franc retail prices just got significantly higher than anywhere else. Parity will need to be achieved, but the solution is not going to hiking up prices internationally to match Swiss prices. Switzerland overall is not an enormous watch market, and most watches sold inside Switzerland are to tourists, rather than to its eight million citizens. The watch market is heated segmented into two: new watches at the retail level, and the secondary market (which includes grey market and parallel imports).

At the retail level, the consumer is unlikely to suffer a major impact – retail prices will not go up anywhere near 20%, 30% or 40% that some doomsayers are predicting.  For one, demand for luxury watches is weak, as evidenced by Swiss watch exports figures and results published by groups like Richemont. Watchmakers no longer have the near mythical pricing power they once enjoyed. Raising prices more will just dampen consumer demand even further.

What will happen is watch brands will have to give up some of their handsome margins, as will watch retailers. The divvying up of the downside will depend on the relative strength of each. Major brands with large turnover that retailers rely on for the bulk of their sales, the watchmaking superpowers like Rolex, Patek Philippe, Omega and so on, have more leverage to compel retailers to make a smaller profit. These big brands are also those with the greatest consumer demand, giving them a stronger bargaining position.

The watch brands that will be left out in the cold are the independents, with little bargaining power. Save for the few independent watch brands with a strong client base and consistent sales, most have almost no leverage over their retailers. Such independents either have to grin and bear it, or see their retail network shrink – something that was already happening before the Swiss franc jumped.

Since the secondary market is dependent on the retail market, whatever happens in the latter will translate into the former. The bigger brands with relatively good demand might see higher prices on the secondary market, but the overall impact is likely to be marginal.

As for the industry itself, the impact is also going to vary amongst brands and groups. The Swatch Group has more production in Switzerland than Richemont for instance, since the former is nearly entirely reliant on watches. Richemont, on the other hand, has about half its sales in jewellery.

Nonetheless, the the big groups and major brands all have healthy enough balance sheets to stay afloat despite the painful currency move. It is the borderline independent brands that will suffer most, which anyway were probably on their way out before the SNB gave them another push. For watch buyers the message remains the same – the watch business is suffered a significant and sizeable slowdown, and there will be compelling buys to be had.