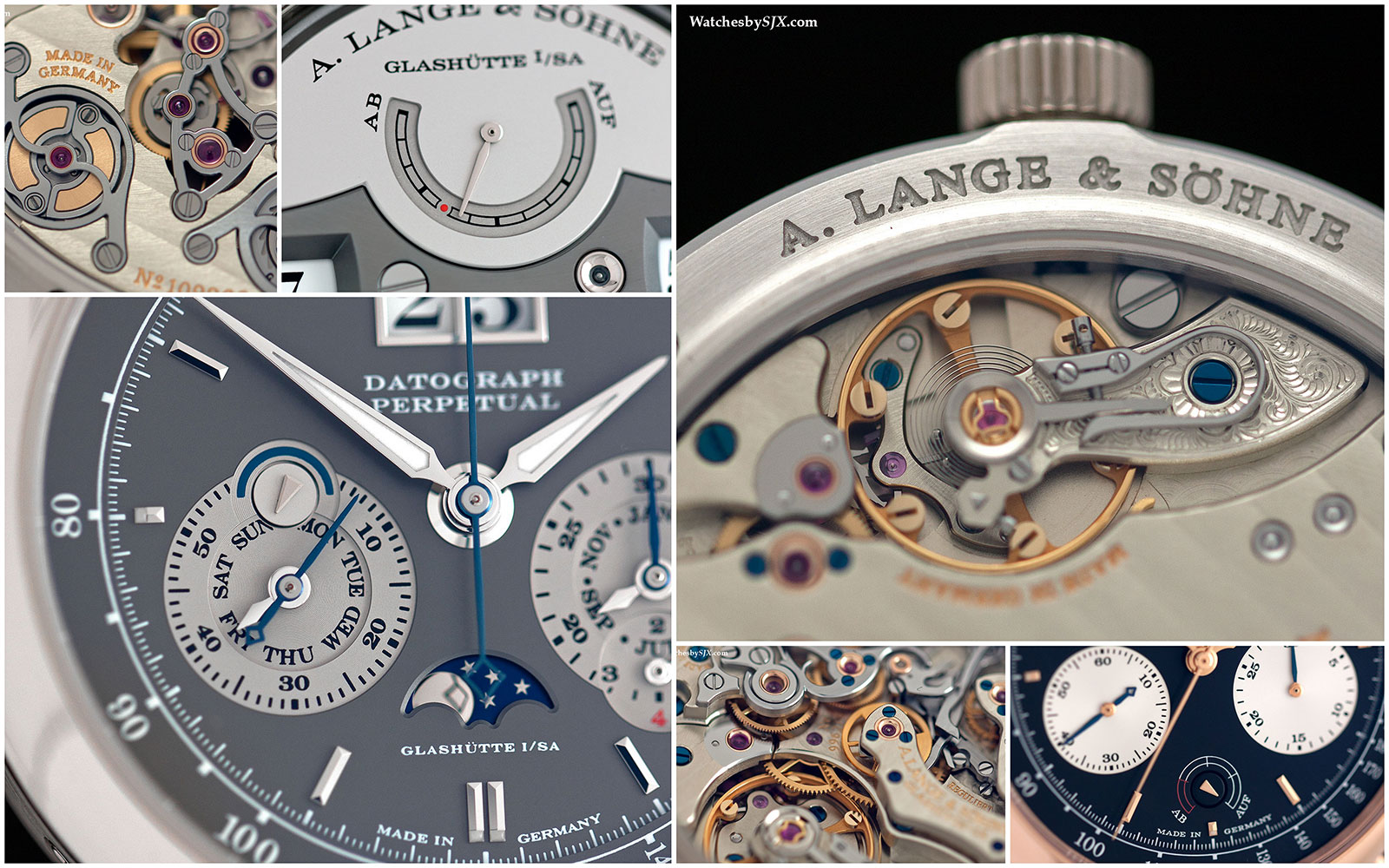 Lange finally unveiled its much awaited Zeitwerk Minute Repeater at SIHH 2015, along with additional versions of existing models, plus a completely revamped Lange 1 that retains the signature look but with a new calibre. Over the last few years Lange has established a practiced routine for SIHH, a major complication fortified by a handful of facelifted models and one or two basic new movements. This year the highlight was the Zeitwerk Minute Repeater – a complication expected for years finally made its debut at SIHH 2015. That was accompanied by variations of the Datograph and Datograph Perpetual, and intriguingly a brand new Lange 1 that looks exactly the same as the old one. And in a minor but significant move, Lange for the first time offers a double fold clasp instead of the chunky deployant buckle that was the only choice before. The most basic of the 2015 additions was a trio of Saxonia models that have undergone minor tweaks – those were outlined earlier before SIHH. More significant is the new Lange 1, seemingly unchanged from the original, but now equipped with a freshly developed and arguably more sophisticated movement. At 38.5 mm in diameter the new Lange 1 is exactly the same size as the Lange 1 launched in 1994 that is now the brand’s most recognisable timepiece. Essentially identical to the first generation, the new Lange 1 has a slightly narrower bezel and is 9.8 mm high, 0.2 mm slimmer than the first generation. The reduced case height is due to the L121.1 movement, a more sophisticated, though less decorative calibre than the one it replaces. The L121.1 features significant improvements over its predecessor: a free-sprung, in-house balance wheel, an instantaneously changing large date, and a power reserve that exceeds three days. That being said the new movement is less decorative, with fewer screwed chatons for instance, as well as a one-piece three-quarter plate. Intriguingly the layout of the new movement puts the balance wheel adjacent to the crown, something practically unseen elsewhere. That means the movement has a logical layout in order to accommodate the asymmetrical dial layout, in contrast to the first generation that was constructed with help from its sister company Jaeger-LeCoultre. The new Lange 1 reflects Lange’s maturity as a company, showing off its ability to create a new movement, but also a more streamlined approached to construction and decoration. The Datograph Perpetual in white gold returns to the collection, with a slightly different dial. As before it has an attractive grey dial, but it has been redesigned for consistency with the rest of the Saxonia line. The most obvious change is the replacement of Roman numeral indices with baton markers. Less apparent tweaks are the removal of minute numerals around the dial, and addition of text below the moon phase. Lange’s flagship timepiece for 2015 is the Zeitwerk Minute Repeater, the second repeating Lange wristwatch after the Grand Complication of 2013. This is a decimal repeater with jumping hours, striking the time with hours, blocks of 10 minutes, followed by individual minutes. Though visually similar to the Zeitwerk Striking Time – both use the same 44.2 mm case – the Zeitwerk Minute Repeater is obviously a far more complex watch with a movement comprising some 771 parts. Both the hammers and gongs are on the dial of the watch, with the gongs taking the unusual outline of the jumping hours bridge instead of being round as is convention. According to Anthony de Haas, Lange’s product development chief, the irregular shape of the gongs has no effect on the sound. Because of the space taken up by the jumping hour mechanism, there was insufficient space for a second barrel as a power source for the repeater. Hence the repeater shares the mainspring that powers the time display, though there is no detrimental effect to timekeeping while the repeater is chiming due to the constant force mechanism. For that same reason, the time display freezes while the repeater chimes, none of the discs jump while it is chiming, though the seconds hand continues to run. Only when the repeater has stopped do the discs continue their motion. And as a safety feature the crown is disengaged while the repeater is in action, so the time cannot be set, preventing damage to the watch.

The repeater chime was soft, due to it being a hastily completed prototype, according to Lange. For now it is available only in platinum, a metal that de Haas notes sounds just as good as gold which is widely believed to sound better due to its lower density.

For the privilege of owning the Zeitwerk Minute Repeater the outlay is €440,000.

And the last new addition is an accessory: a folding clasp with two blades that should fit smaller wrists better than the existing single-blade clasp. The price is unknown but if the current clasp is a guide (the single-blade platinum folding clasp costs US$7800) expect this to be frighteningly expensive. 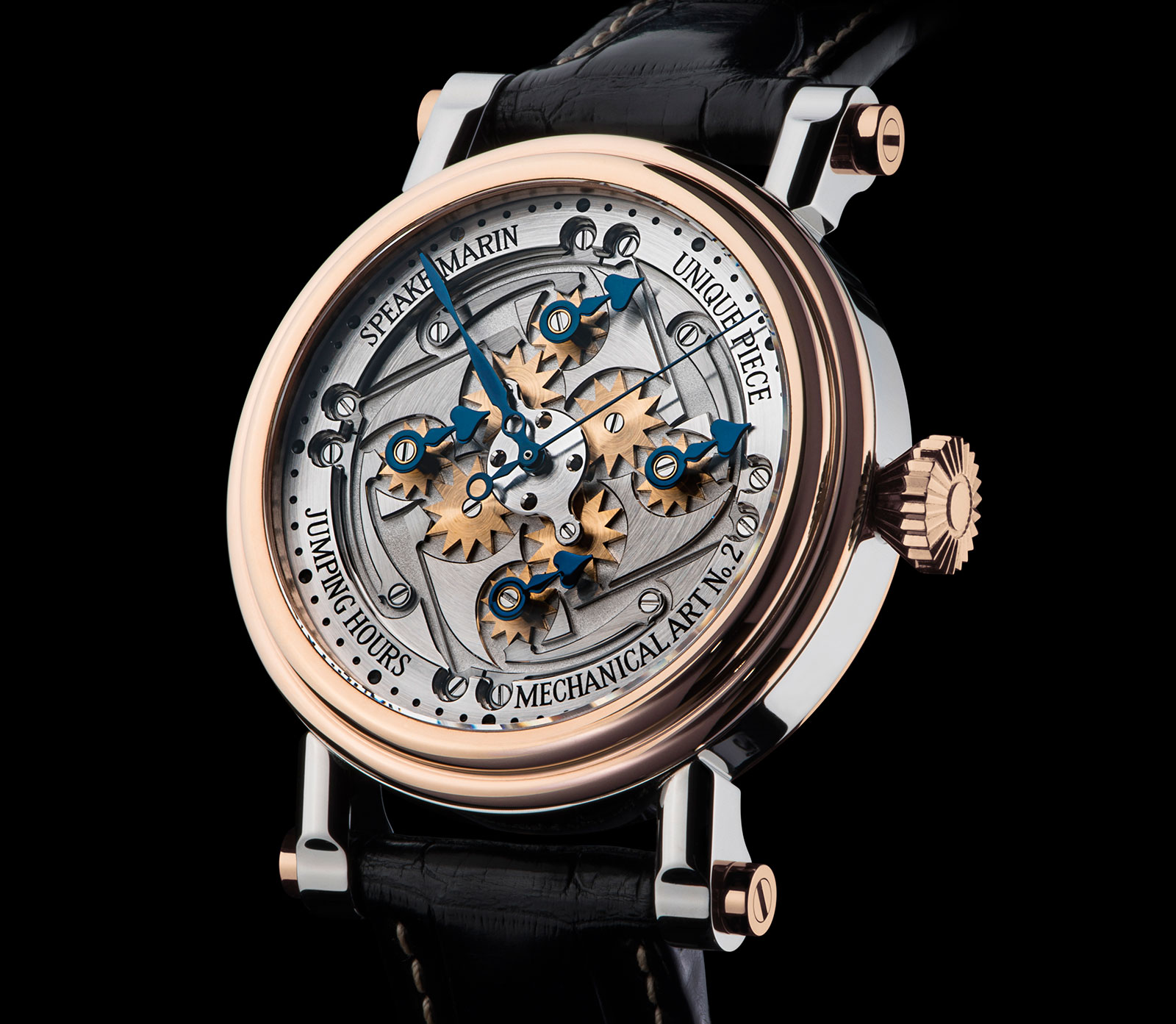 A unique timepiece, the Speake-Marin Jumping Hours features four hour hands jumping sequentially, with the stars, levers and springs of the mechanism forming the dial. Equipped with an intriguing jumping hour mechanism, the Speake-Marin Jumping Hours is a one-off creation that takes the classic jump hour mechanism and multiplies it by four. All of the hour hands located in of the dial quadrants jump at the respective quarter hour, one after another. This is the second timepiece from Speake-Marin – now fronted by former James Bond Pierce Brosnan – with a novel, multi-hand time display first used in the Triad. When the minute hand reaches noon the hour hand at 12 o’clock jumps, followed by the hour hand at three o’clock when the minute hand passes the 15 minute mark. This continues until the central minute hand reaches 12 o’clock again, and the cycle starts anew. As each hour hand jumps, a tiny window adjacent to the minute hand axis turns red, indicating the respective hour has jumped. Instead of the dial the complex quadruple jumping mechanism is completely exposed, showing off the fine hand-finishing of the gears and springs that drive the jumping hours. The Jumping Hour mechanism is built on the Speake-Marin Eros movement, a self-winding calibre based on a Technotime movement with a five day power reserve. Shaped in Speake-Marin’s topping tool logo, the mystery rotor is blued steel, and gets its name from the fact that there appears to be no winding weight attached to the rotor. This is the same movement that equips most of Speake-Marin’s watches, including the single-handed Veshelda. Made of steel with red gold accents, the case is 42 mm in diameter and in Speake-Marin’s signature Piccadilly style, with straight lugs and an onion-shaped crown. The Speake-Marin Jumping Hours is priced at 120,000 Swiss francs before taxes.

For the first time Speake-Marin has created a ladies' wristwatch with the Shenandoah, featuring an oval case with a fuss-free quartz movement inside.