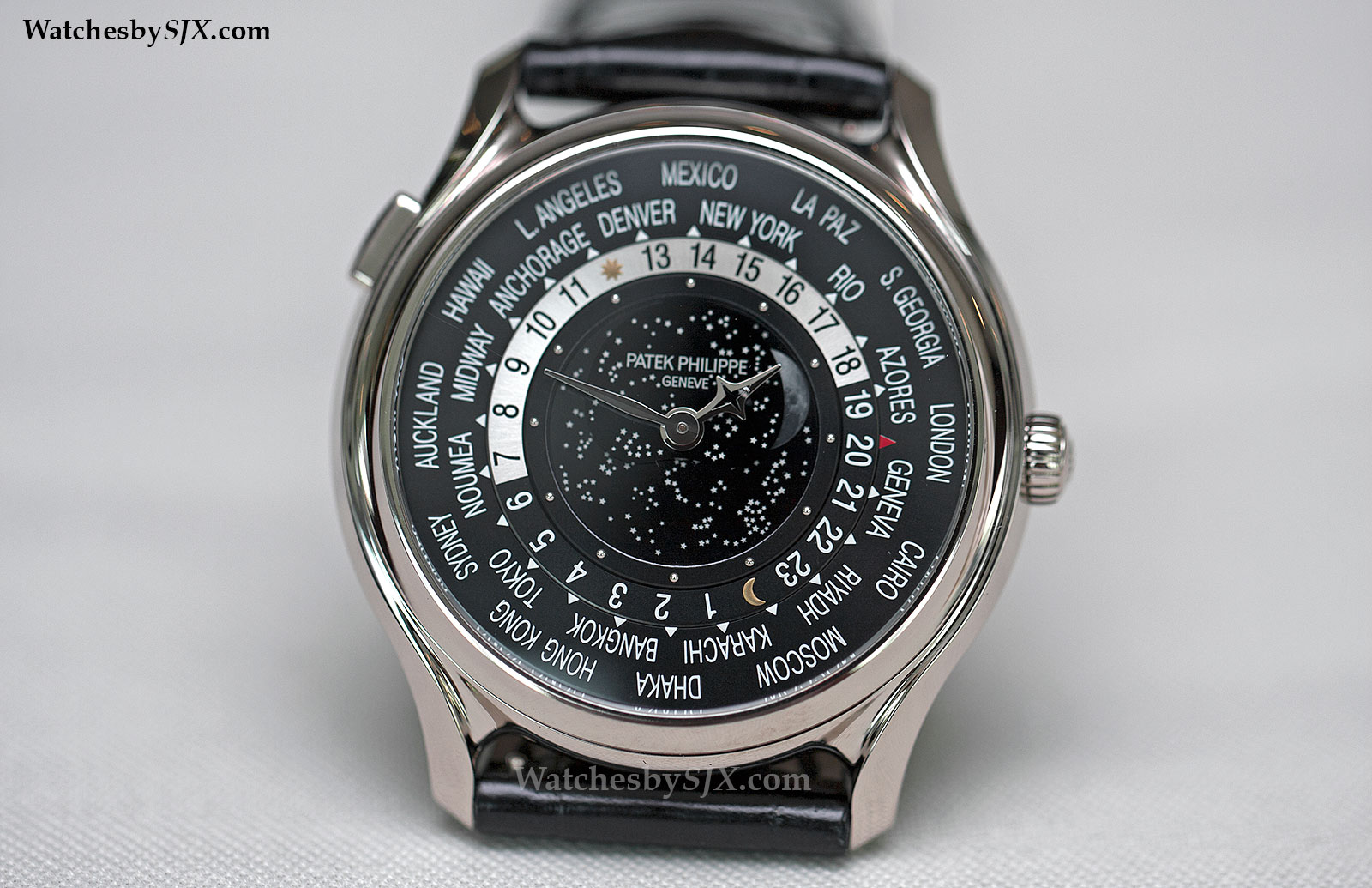 Of the four models Patek Philippe unveiled for its 175th anniversary, the Multi-Scale Chronograph and World Time Moon stand out for being relatively affordable – after all, the top of the line anniversary Grandmaster Chime costs 2.5 million francs. Unsurprisingly, they have garnered the most interest, particularly the World Time Moon, according to anecdotal evidence from Patek Philippe retailers. Made in both men’s and ladies’ variants (refs. 5575G and 7175R respectively), the World Time Moon is unusual in several respects. For one, it’s the first time in the modern era Patek Philippe is combining a world time with another complication. And the World Time Moon is also a very large edition, totalling 1750 pieces for both versions. Less obvious but also significant is the sculpted case form, illustrating the great strides Patek Philippe has made in its case making. There are two versions of the World Time Moon, the first being the men’s Ref. 5575G, in a white gold case measuring 39.8 mm across. This will be made in a surprisingly large edition of 1300 pieces with a price of 45,000 Swiss francs. Both versions of the World Time Moon are mechanically identical, equipped with the calibre  240 HU LU (short for heures universelle lune, translating as “world time moon”). The world time functions works exactly as it does with the regular world time: the button at 10 o’clock advances the display by an hour.  In short, it is the very traditional 24 time zone world time as invented by Louis Cottier and made famous by Patek Philippe, though also utilised by other brands. But in a nod to Patek Philippe’s anniversary, Central European Time is denoted by Geneva on the cities disc, rather than Paris as is convention. In the centre of the dial is the oversized moon phase display, comprised of two glass discs. The lower disc is metallised (essentially a thin layer of metal coating) on its underside with a depiction of the night sky scattered with stars, as well as a very large moon, almost exactly as it appears from Earth, complete with craters and ancient volcanic plains. Above that the second glass disc is clear, except for a kidney-shaped outline where the Patek Philippe logo is. This outline forms the shadow of the moon, allowing the age of the moon to be displayed. Continuing the astronomical theme, the hour hand is shaped like an elongated star, inspired by the Southern Cross constellation. While novel, the star-shaped hand is at odds with the relatively classical aesthetic of the watch.

Like the other models in the anniversary line-up the World Time Moon has a solid back. However, the movement inside is likely identical to the calibre 240 inside the conventional world time, which looks like this. Aesthetics and movement aside, equally notable is the case shape of the World Time Moon, particularly the lugs. Sleek and flowing, the lyre lugs are beautifully shaped and carefully formed. They are a world away from the simplistic case form of the World Time Ref. 5130 and 5131. The increased detail and quality of the case form is not limited to this model, in general Patek Philippe has made notable progress in its case manufacture. A quick comparison of the Refs. 3970 and 5270 illustrate the same point – these are equivalent models two generations apart but with major improvements in the case quality.  The World Time Moon Refs. 5575 and 7175 are being delivered to Patek Philippe retailers right now, with a long waiting list for both. However, given the 1750 pieces made in total, the wait might not be as long as expected.