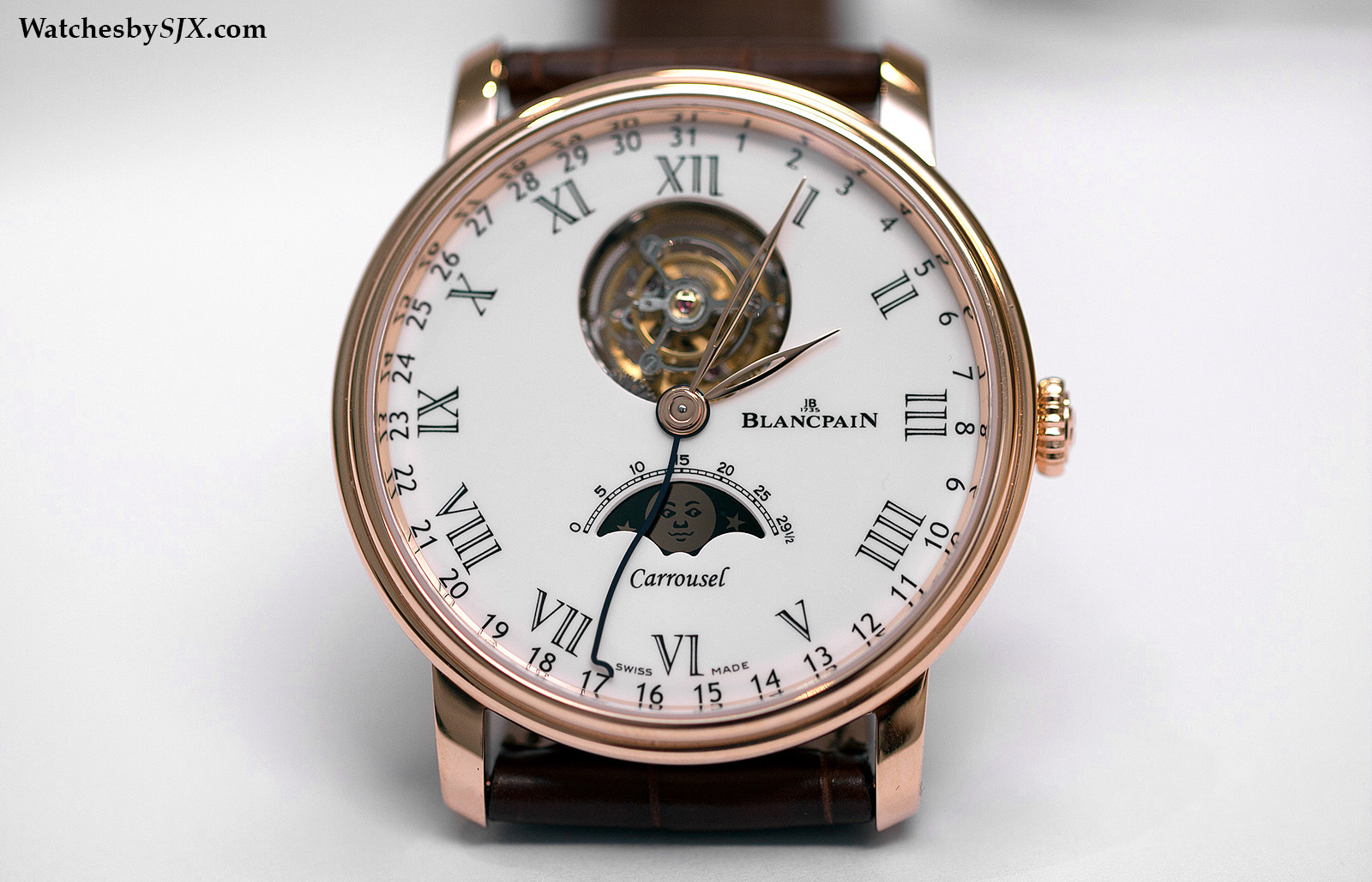 A classically styled timepiece with an unusual combination of complications, the Blancpain Villeret Carrousel Moon Phase features a device that averages out gravitional errors in the balance wheel – but is not a tourbillon – as well as a classic moon phase with a face, on a white grand feu enamel dial. Blancpain was one of the first movers with a wristwatch tourbillon in the late eighties, designed by Vincent Calabrese. That flying tourbillon with a bridge-shaped cage was unusual because its cage rotated on a separate axis from the balance wheel. For that reason, the Blancpain tourbillon was sometimes mistaken for carrousel. In 2008 Calabrese responded with the first carrousel wristwatch, developed for Blancpain. The irony lay in the fact that the carriage and balance wheel of the carrousel were on the same axis. In the Villeret Carrousel Moon Phase, the carrousel rotates once a minute, like a typical tourbillon. It sits at 12 o’clock, with the moon phase right below, leaving the dial nearly symmetrical. As with Blancpain’s other moon phase watches, the moon disc here has a gilded face looking to the side, a charming detail. Similarly beautiful is the blued steel serpentine hand for the date. Both the date and moon phase are set via correctors set under the lugs, instead of the conventional pushers in the case band. This allows for adjustment without a stylus (or more likely a toothpick), and leaves the lines of the case unmarred.  The dial is a bright white fired enamel, with the thickness and texture characteristic of an enamel dial visible in the apertures for the moon phase and carrousel. Blancpain equips a large number of its timepieces with enamel dials, an indication of how well it has advanced what is otherwise a laborious process – with enormously high rejection rates – of producing fired enamel dials. The case is 42 mm with a sapphire display back showing the 225L movement. Self-winding with a five day power reserve, the 225L is typical of Blancpain in style and finishing. Particularly distinctive are the wheels with angular spokes that are now commonplace amongst Blancpain’s movements.