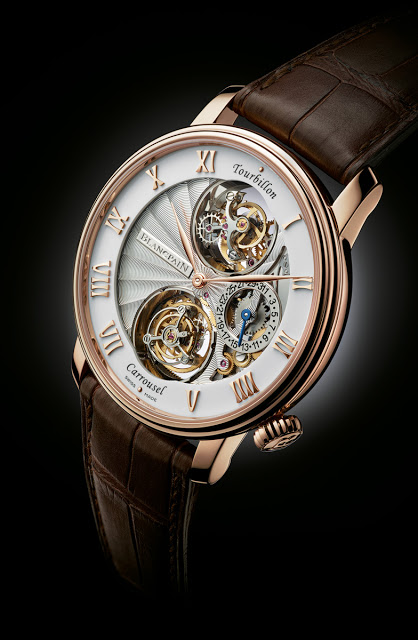 The Blancpain Tourbillon Carrousel has both a tourbillon and a carrousel. Both are link by a differential, and rotate on the same plane. At Baselworld 2013 Blancpain unveiled an oddity, the Tourbillon Carrousel. Its name stems from the fact that it has a tourbillon and a carrousel (or karussel), with the rate of each averaged out by a differential. Given both the tourbillon and the carrousel are intended to average out the effects of gravity in a vertical position, this seems a bit redundant.  The tourbillon and carrousel – both of which have silicon hairsprings – are rotating on the same plane, which means there should be little difference between the two. Contrast this with the Greubel Forsey Invention Piece 2, which has twin inclined tourbillons which are on different planes, ditto for the tourbillon-less Double Balancier 35° and the Roger Dubuis Excalibur Quatuor. Aside from the tourbillon and carrousel on the front, there is also a date display at three o’clock. And the dial is circled by a white, grand feu enamel chapter ring with applied rose gold numerals. Helpful labels are included: “Tourbillon” at 12 o’clock and “Carrousel” at six. The Tourbillon Carrousel has twin barrels, wound simultaneously via the crown at four o’clock, with a seven day power reserve between them. A power reserve display is present on the back. The rose gold case is 44.6 mm wide and 11.94 mm high, making this a fairly large watch. Retail in Singapore is S$441,600, including tax of 7%, which works out to about US$359,000. – SJX