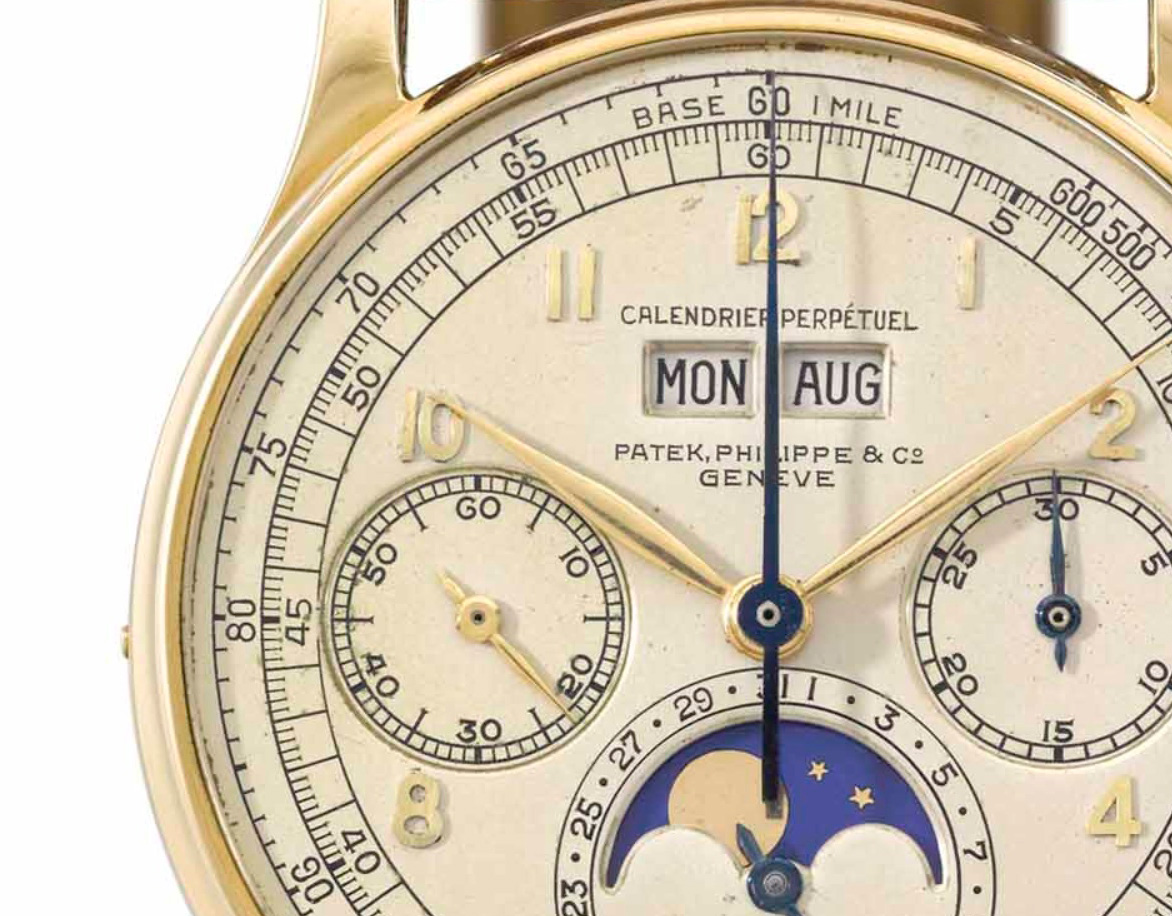 Christie’s upcoming sale in Geneva comprises 440 lots. The line-up is diverse, including vintage and modern timepieces. But most notable are several one-of-a-kind timepieces from the star brands of the auction world, Patek Philippe and Rolex. As is typical of Geneva auctions (sales in Hong Kong tend to emphasise modern watches), the offerings at Christie’s for its 12 May 2014 sale feature numerous significant and pricey vintage timepieces. One of the highlights of the sale is the lot 376, a possibly unique Patek Philippe reference 1518 signed “CALENDRIER PERPÉTUEL” on the dial. The first wristwatch featuring both a chronograph and perpetual calendar, the reference 1518 is a tiny 35 mm in diameter but widely regarded as one of the most important wristwatches ever. Estimated at 500,000 to 800,000 Swiss francs, this particular specimen is possibly unique (lot 376).  Produced in 1942, a year after the model was introduced, this watch has “CALENDRIER PERPÉTUEL” on the dial in black enamel lettering, a feature never seen before on this model. The reasons for this unique dials is lost to history, but Christie’s speculates it might have been a marketing ploy given that the reference 1518 was the first wristwatch of its kind. Interestingly, though this reference 1518 is likely unique, in 2007 Christie’s sold a reference 1526 perpetual calendar with a similar “CALEND. PERPÉTUEL” inscription on the dial.  Also unique, but for all the wrong reasons, is a Patek Philippe Nautilus reference 3800/1 in platinum with diamond indices (lot 46). Less than 10 examples of this watch have been sold at auction, but this particular piece is unique because of the hand-engraved Roman numerals on the bezel – which were unfortunately done after-market and not by Patek Philippe. As a result of this, Christie’s note that “no Extract from the Archives will be issued” and has given it a lowish estimate of 12,000 to 18,000 Swiss francs. Let this be a lesson on why originality is important. To continue the theme of unique timepieces, blessed with a 500,000 to 800,000 Swiss franc estimate is yet another possibly unique timepiece, a Rolex reference 6062 triple calendar with moon phase in steel (lot 262). Already rare in steel, this reference 6062 has a black lacquered dial, and is the only known example with such a dial. Notably, this reference 6062 has a dial characteristic of sixties Rolex watches, though it was originally made in 1953. This is explained by the fact that it was sold in the sixties, because the reference 6062 did not well well when it was launched in the fifties. Another special Rolex is the reference 5029/5028 with a cloisonné enamel dial depicting a whale and a frigate in stormy seas, and star-shaped hour markers (lot 207). Made in 1949, this is believed to be the earliest enamel dial Rolex ever made, and also the only example with star-shaped indices. Several other characteristics add to its rarity, the 36 mm case which was large for the time, the edge to edge enamelling on the dial, and the fact that the dial was made by Marguerite Koch, a noted enamellist of the period. Additionally, it is in wonderful, unrestored and unpolished condition. All of that results in the 500,000 to 1,000,000 Swiss franc estimate. In the same stratosphere is a Breguet, a brand rarely encountered in this price range (lot 294). This particular Breguet pocket watch, however, is historically significant. It is the third tourbillon made by Breguet, which by extension makes it the third tourbillon ever. It is also Breguet’s first four minute tourbillon.  In addition, this is equipped with a natural escapement, double subsidiary seconds, a power reserve, and a guilloche, regulator-style gold dial. Sold in 1809 to adventurer and writer Count Potocki, this is estimated at 600,000 to 1,000,000 Swiss francs. Also the only one of its kind is the Lange Tourbillon Pour le Mérite in white gold, estimated at 150,000 to 250,000 Swiss francs (lot 392). Typically available with a blue dial and Arabic numerals, of which 18 pieces were made, this particular watch was delivered with a black dial and arrowhead indices, making it unique. To continue the theme, another rare Lange at the same is the Lange 1 in steel, one of about two dozen made (lot 386). Lange watches in steel are uncommon: last year Christie’s sold a similar steel Lange 1 for nearly 150,000 Swiss francs, while a unique, steel Double Split sold for over US$500,000. That explains the 80,000 to 150,000 Swiss franc estimate for this steel Lange 1. Also in the sale is a Lange 1A, the first ever limited edition Lange 1 (lot 387). The case is yellow gold, as is the guilloche dial, and even the date disc, giving it a striking, almost entirely gilded hue. The balance cock, escape wheel and pallet fork are also made of solid gold. Made in a limited edition of 100 pieces in 1998, this is estimated at 40,000 to 60,000 Swiss francs. Worth a mention is a Vacheron Constantin reference 4178 chronograph from 1945 (lot 299). Estimated at 25,000 to 45,000 Swiss francs, the reference 4178 is widely regarded as the quintessential chronograph from Vacheron Constantin. This piece has the signature tear-drop lugs of the model, but has the addition of the uncommon pulsometer dial, designed for doctors to allow measurement of a heart rate. The last highlight is an unusual and quirky timepiece (lot 265). Estimated at 14,000 to 16,000 Swiss francs, it is an unsigned pocket watch with a perpetual calendar and equation of time display, but no time display. The moon-tipped hand indicates the date and month, while the sun hand is for the equation of time. The Christie’s Geneva auction will take place on 12 May 2014 at the Four Seasons Hotel des Bergues. More details can be had from Christie’s. All images copyright Christie’s Images Limited 2014