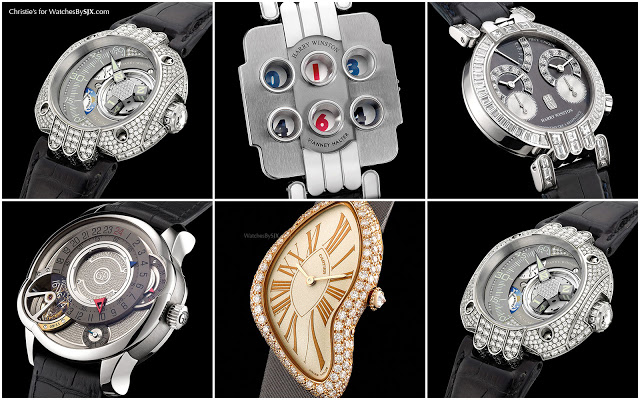 Christie’s “Important Watches” auction takes place in Hong Kong on June 3, 2015, with over 500 lots slated to go under the hammer. Here are 10 highlights from the sale. As is typical for watch auctions in Hong Kong, the catalogue is dominated by modern wristwatches, as opposed to the large number of vintage pieces offered in Geneva. Fortunately for those seeking value modern wristwatches often offer tremendous bang for the buck, like the De Bethune mono-pusher chronograph with an estimate starting at US$13,000. I’ve picked out 10 notable watches from the upcoming sale, ranging from strong value buys to the headliners like the platinum Harry Winston Opus 3. Lot 2222: The Panerai Radiomir Chronograph PAM163, an early limited edition Panerai from the days when the brand was still a cult brand with smallish production volumes. This was just one of several Panerai models from the early 2000s equipped with interesting vintage movements.

Inside is the Valjoux 234 (essentially a Valjoux 23 with date), a hand-wound, column wheel chronograph movement from the seventies with a traditional and solid construction. The same movement is found in the Tudor Monte Carlo chronographs. A notable feature is the asymmetric placement of the chronograph buttons, with the start and stop button being closer to the crown. The market for modern Panerai watches is tepid, explaining the estimate of HK$90,000 to HK$120,000 (US$11,000 to US$15,000), less than a third of the original retail price. A second specimen in the same sale has a marginally lower estimate. Lot 2226: A De Bethune single-button chronograph in yellow gold, in the style typical of the earliest De Bethune watches, heavily Breguet-inspired. It’s powered by the hand-wound movement made by THA, the same calibre found in the Cartier Monopoussoir watches. THA was founded by F.P. Journe, Vianney Halter and Denis Flageollet, three of the brightest watchmaking minds of our time. And being three of the brightest watchmaking minds of our time, THA did not last long and each went his separate ways, with Flageollet becoming co-founder of De Bethune. With today’s De Bethune starting at about US$50,000, this is a relative bargain with an estimate of HK$100,000 to HK$150,000 (US$13,000 to US$18,000). Lot 2440: An iconic wristwatch form if there ever was one, the Cartier Crash is made in small quantities, either as limited editions (like the recent Crash Skeleton) or special orders. This falls into the latter category, with an ivory dial, along with gilded numerals and hands. Most Crash watches have silvered dials with blued steel hands and black numbers (like this), making this uncommon. Cartier rarely deviates from the standard formula for its Crash watches, even for special orders, so a watch like this is not easy to come by. Estimated at HK$320,000 to HK$500,000 (US$40,000 to US$62,000). Lot 2462: The Greubel Forsey Invention Piece 3 in white gold, part of GF’s Invention Piece series of watches, all of which are avant-garde variants of its signature tourbillon movements. The IP3 features the 24 second tourbillon, inclined at 25 degrees, while the dial and back are covered in minuscule, relief script. Greubel Forsey makes some of the most expensive watches in the world, but happily they cost much less on the secondary market. One of only 11 made in white gold, this is estimated at HK$1.6m to HK$2.4m (US$200,000 to US$300,000). Lot 2532: The Harry Winston Opus 1 was the edition that started the entire Opus series, the inspiration for the creations of MB&F. Launched 15 years ago when Max Büsser first led Harry Winston Rare Timepieces, the Opus 1 was a collaboration between the jewellery and F.P. Journe – Harry Winston was responsible for the aesthetics while Journe supplied his elegant movements.  Three distinct models were made: the Remontoir Tourbillon, Resonance and Octa Automatic, each in a limited edition of six pieces, with every piece having its own unique dial colour. Though the dial layout of all the Opus 1 are recognisable as Journe’s work, the case style is far more massive than Journe’s slim timepieces. Büsser himself once told me the Opus 1 cases not only used vastly more precious metal but were also far harder to machine than the equivalent Journe watches. Lot 2534: The watch that almost remained a mere fantasy, the Opus 3 took a decade to arrive at stores. Originally conceived by Vianney Halter, it took a succession of watchmakers from Philippe Dufour to Renaud & Papi to finally make it work. The difficulty lay in the powering the jumping, digital indications, not just for the hours and minutes, but also for the seconds, which count down the last four seconds before the minute changes. Lot 2535: The Harry Winston Opus V, part of the trio of the most significant Opus timepieces along with the Opus 1 and 3. This was the work of Urwerk, specifically its co-founder Felix Baumgartner, whose name appears on the case. Three satellite cubes indicate the hours, while a retrograde hand points to the minutes – the same mechanism found in the Urwerk 202 and 210. Lot 2641: An uncommon Jaeger-LeCoultre Reverso Duo, made in the 1990s for the Japanese market. What makes it unusual is the two colour case, white gold on the front and rose gold on the flip side. Made in a limited edition of 250 pieces, this is one of several interesting and rare editions made for Japan about 20 years ago. These Japan edition are probably the only complicated Reverso watches ever made with cases in two colours of precious metal. Both the case and bracelet are 18k gold, with an estimate of HK$64,000 to HK$96,000 (US$8000 to US$12,000). Lot 2663: An earlier Daniel Roth with retrograde hours, illustrating the fine and tasteful brand of watchmaking practiced by Daniel Roth himself in his prime in the early 1990s. Roth is a talented independent watchmaker who still makes watches under the Jean Daniel Nicolas label, who invented the double ellipse case that was his trademark.

This has an open worked movement that is hand engraved with a floral decorative pattern in a style that is typical of skeleton watches from that period. It is not a new calibre, instead it’s a round, hand-wound Lemania calibre from the 1950s, with a retrograde mechanism designed by Roth. The skeletonised base reveals the intricacies of the retrograde works, including the springs and stars that drive its jump. The estimate of HK$45,000 to HK$60,000 (US$5800 to US$7500) is a bargain for the quality of work. Lot 2546: Omega Speedmaster Missions, a set of 23 watches to commemorate the 40th anniversary of the Speedmaster Professional in 1997. Presented in a briefcase covered in the same fabric used to make spacesuits, the Missions set also includes a spare calibre 1861. 22 of the watches commemorate every NASA mission from 1965 to 1973, with the mission logo on the dial at nine o’clock, while the last watch in the set is a Speedmaster ’57 Broadarrow reissue (pictured at bottom). The sale takes place on June 3, 2015 in Hong Kong. More information on the sale as well as the complete catalogue is available from Christie’s. This feature was brought to you by Christie’s watch department.