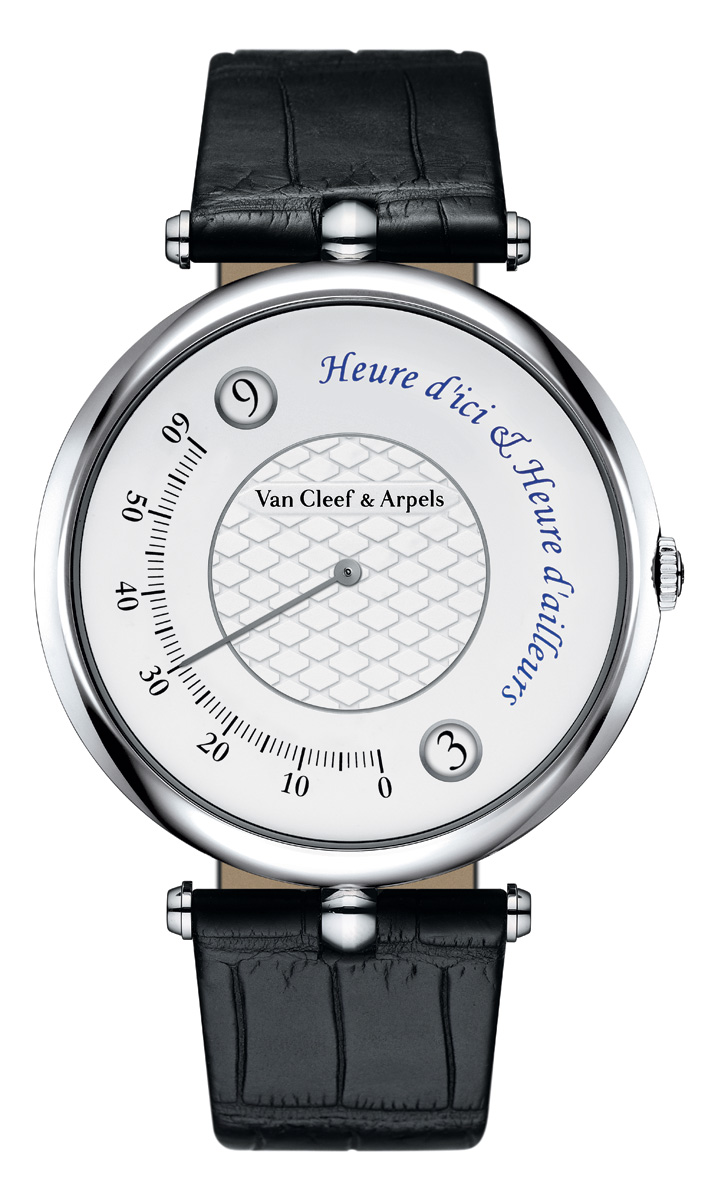 The Van Cleef & Arpels Pierre Arpels Heure d’ici & Heure d’ailleurs – “time here and time elsewhere” – is an elegant dual time zone that is simple yet complicated. With everything extraneous (and a little bit more) peeled away, it features only a double jump hour for each time zone, and a retrograde minutes display in between the two hour apertures. Home time is indicated by the hour aperture at 11 o’clock, and local time at five o’clock. The fan shaped retrograde minute scale runs from one hour window to the other. At the top of the hour, all three indications – two hour discs and the retrograde hand – jump simultaneously. Both time zones are set via the crown, which is topped with a diamond.

The calibre was developed by none other than Agenhor, the technical specialist run by Jean-Marc Wiederrecht, who was responsible for most of the other VC&A complications, including the Poetic Wish repeaters. Self-winding with a platinum micro-rotor, the movement also features with a bidirectional magic lever winding, a mechanism seemingly favoured across all Richemont brands. Admittedly the Pierre Arpels Heure d’ici & Heure d’ailleurs is not particularly practical as a travel watch, since it lacks both a date and a day/night indicator, but its elegance and simplicity have to be admired.  The Pierre Arpels Heure d’ici & Heure d’ailleurs is presented in a white gold, 42 mm case, A pique motif, inspired by the front of a formal shirt, decorates the white dial.  The retail price is 48,500 Singapore dollars, equivalent to about US$37,900. Keep an eye on our SIHH page for updates. Or follow us on Facebook, Instagram and Twitter to keep track of the happenings at SIHH 2014.

SIHH 2014: Introducing the Van Cleef & Arpels Midnight Planétarium Poetic Complication, the solar system on your wrist (with specs and price)