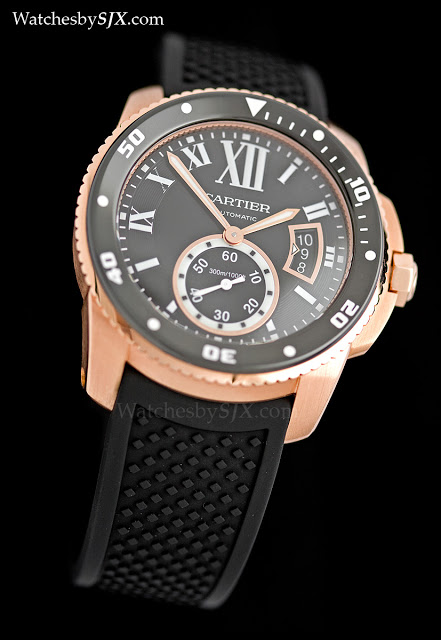 While Cartier has made sport watches before, the Calibre de Cartier is its first true dive watch. It was designed to conform to ISO 6425, a standard for dive watches. ISO 6425 is price- and brand-agnostic, and includes water, shock and temperature resistance. Meeting these requirements means the watch can be considered a diver’s watch suitable for scuba diving. Based on the Calibre de Cartier, the diver’s version of this model uses the same basic case form, making it similar to last year’s Calibre de Cartier Chronograph. The dive version, however, is distinguished by its unidirectional bezel, one of the key criteria of the ISO 6425 standard (which refers to it as a “time-preselecting device”).  Though found on every dive watch and typically simple in construction, the bezel on the Calibre de Cartier Diver is anything but. Significant effort was put into ensuring the bezel is not just reliable and robust, but also to give it a good tactile feel.

Comprised of two parts – the upper bezel with the engraved numerals and the notched outer ring – the bezel turns in one direction with 120 precise-sounding clicks, thanks to teeth on the underside of the bezel and studs on the case below. The form of the teeth and studs were optimised to give the bezel the right sound and feel. And the bezel is coated with amorphous diamond-like carbon (ADLC) on the outside, hence its black colour, and also on the inside. The inner coating means the bezel is self-lubricating, since ADLC is virtually frictionless.

Just to ensure the bezel worked as envisioned, Cartier tested this bezel submerged in water – with salt and sand thrown in – for two turns per second for an hour and a half, which equals 10,800 turns. That is equivalent to a decade’s worth of wear, and the bezel still turned with the same smoothness after the test. Another notable case detail lies in the crown. Unlike conventional crowns where the crown is connected to a stem, which is inside the tube fixed to the case, the Calibre de Cartier inverts the construction. Here the screw-down crown is connected to the tube, with the threads located inside the tube, which gives this better reliability according to Cartier.

This unusual system was originally developed for the Tortue Monopusher chronograph, in which the crown had to serve as the time-setting mechanism as well as chronograph pusher. And though Cartier does not explain the reason for its use, the system was likely adopted so as to allow a screw down crown to be integrated into the normal Calibre de Cartier case (which normally has a friction fit crown). Fitted with a 2.2 mm thick crystal (compared to 1.2 mm in the regular model), the Calibre de Cartier Diver is water-resistant to 300 m (ISO 6425 mandates a minimum of 100 m), but that is just the basic criteria.

The watch was also designed to pass all the other ISO 6425 tests, including a water resistance test to 375 m for one minute and a thermal shock test, whereby the watch is immersed in 30 cm of water for 10 minutes each at 40 °C, 5 °C and then 40 °C again. These tests include applying a 200 N to the spring bars on each side of the watch, to ensure the strap or bracelet will not snap off inadvertently. Visually the Calibre de Cartier Diver looks like the luxury sports watch it is. An important detail is the ADLC coating on the bezel, which gives it a durable, glossy black finish; ADLC is scratch-resistant. The bezel is matched by the tone of the dial, both have a black piano-like finish, which is attractive and difficult to capture in photos. The only design element that does not square with the diver aesthetic are the sword hands, which could be broader. But that is an issue of aesthetics rather than functionality, for ISO 6425 also calls for legibility in low light and darkness, which has been achieved with liberal application of Luminova, even on the seconds sub-dial.

The prominent sub-seconds is one of the key elements of the dial, and it balances out the three-date aperture, which is really an acquired taste. Though the dial is very similar to the regular Calibre de Cartier, the diver is much more appealing and coherent overall. The case is finished like the regular Calibre de Cartier model, which is to say very well. Most surfaces are brushed, while the lugs have wide, polished bevels. This is reflective of the high quality of finish Cartier employs on its cases, even for entry and mid level timepieces. Equipped with the 1904 MC automatic movement, the in-house workhorse calibre also found in the recently launched Tank MC, the Calibre de Cartier Diver is 42 mm in diameter. That’s the same as the regular model, but the diver is thicker at 11 mm (against 9.8 mm), primarily due to the bezel. A soft, textured silicon strap was designed for the Calibre de Cartier Diver, and is paired with a pin buckle. The buckle, while functional, is not very compelling unfortunately. Equipped with the 1904 MC automatic movement, the in-house workhorse calibre also found in the recently launched Tank MC, the Calibre de Cartier Diver has a solid case back.

Its diameter is 42 mm, the same as the regular model, but the diver is thicker at 11 mm (against 9.8 mm), primarily due to the bezel.