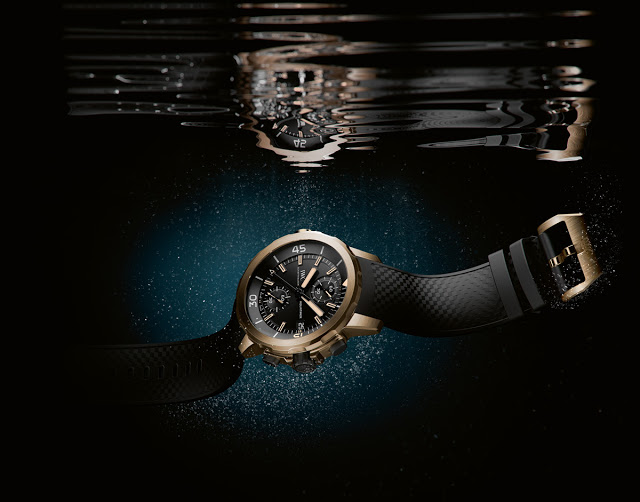 IWC will unveil the revamped Aquatimer collection of dive watches at SIHH 2014, including a Deep Three with depth gauge as well as IWC’s first bronze watch, the Aquatimer Chronograph Charles Darwin.

IWC’s Aquatimer line of dive watches gets a facelift in 2014. The most prominent change is the return to the inner rotating dive bezel, a feature used in historical Aquatimer watches.  Furthermore, the Aquatimer range now features more in-house movements, as well as more complicated models, with the top of the line being the new Aquatimer Perpetual Calendar Digital Date-Month, a 49 mm behemoth. Another notable addition is the Aquatimer Deep Three, a mechanical depth gauge for dives of up to 50 m. The key feature of the new Aquatimer is the newly developed, hybrid internal-external rotating bezel. Like all dive bezels, this turns only anticlockwise, moving in increments of one minute. But mechanically it is unusual. An external, notched bezel is linked via a sliding clutch to the inner, dive bezel. So turning the external bezel turns the inner ring, marked for dive times, simultaneously. The bulge on the case at nine o’clock is the protective cover for the sliding clutch. As a preview of the new collection IWC has released images of the two limited edition Aquatimer chronographs, the bronze Charles Darwin and the rubber coated Galapagos, plus the Aquatimer Automatic 2000.

Equipped with a titanium case, the Aquatimer Automatic 2000 (Ref. IW358002) is water-resistant to 2000 m, or 200 bar. It says it is inspired by the minimalist Ocean 2000 made in collaboration with Porsche Design in the eighties, though the new Aquatimer is hardly minimalist in design. This is fitted with the automatic 80110 calibre, the basic movement in the 8000 family of movements made in-house by IWC but using the gear train of the Valjoux 7750.  The Aquatimer 2000 is a beef up dive watch. For those who want a more basic model, the entry level model will be the Aquatimer Automatic with a 42 mm case and 300 m water resistance. That will be unveiled officially at SIHH. Created to help raise funds for conservation of the Galapagos Islands through its partnership with the Charles Darwin Foundation, the Aquatimer Chronograph Edition “Galapagos Islands” (Ref. IW379502) has a black rubber coated case and is water-resistant to 300 m. Part of the regular collection and not a limited edition, the Galapagos Islands is equipped with the 89365 calibre, from the same cal. 8000 family of movements. The case back depicts an iguana, one of the creatures native to the islands.  There is a second Galapagos model which will be launched at SIHH with blue dial accents and a rubber coated case, which will be limited to 500 pieces. Also part of the regular line-up is the Aquatimer Chronograph Edition “Expedition Charles Darwin” (Ref. IW379503), which is another effort to aid the Charles Darwin Foundation. This too is equipped with the cal. 89365, but with a bronze case rated to 300 m. Charles Darwin is portrayed on the case back of the bronze Aquatimer. Whereas IWC was a pioneer with materials in the eighties, namely with titanium and ceramic cases, the Charles Darwin comes some two years after the Panerai PAM382 Bronzo, when bronze is not the novelty it once was.  In fact, the Bronzo was not the first bronze wristwatch but the one that made the alloy the latest fad in watchmaking. And only last year that IWC unveiled its first carbon fibre watch, the Ingenieur Carbon Performance. SIHH 2014: Details on the full IWC Aquatimer collection (with specs and pricing)

2013 was our best year ever in terms of readership, and dare we say, content. We encountered some fantastic timepieces in 2013, and also profiled some unbelievable collections. Seiko’s last two vintage reissues were big hits. The first one, to mark the brand’s 130th anniversary, was a remake of the original Grand Seiko. And the second, which came in 2013, was a replica of the distinctive 44GS. We put them head to head. 8. Explaining the Seiko Astronomical Observatory Chronometer, and Seiko’s history in Swiss chronometer competitions Seiko has a major, and little known, history as a champion chronometer producer, which swept the board at all the major Swiss chronometry contests in the sixties. Some say that was the reason the contests were subsequently terminated. We explained that history, as well as went hands-on with the exceptionally rare Seiko Astronomical Observatory Chronometer. Read the full story. 7. Hands-on with the Jaeger-LeCoultre Master Calendar from SIHH 2013 Our detailed report on the collection presented by Jaeger-LeCoultre at SIHH 2013, including the 1833 Jubilee trio, made to mark the manufacture’s 180th anniversary. This was definitely one of the most diverse, with something for every budget, line-ups presented at the fair. Full story here. 5. Hands-on with the Seiko Snow Monster (and explaining the Seiko Thailand limited editions) Seiko has made a series of unusual, annual limited editions specifically for the Thai market, including the cool blue Snow Monster. These are significantly more costly than the equivalent regular models, but they are nevertheless keenly collected. Despite being sold only in Thailand, they have acquired a small but dedicated foreign following. Find out more here. 4. Hands-on with the Omega Speedmaster “Dark Side of the Moon” – the first ceramic Speedy One of Omega’s biggest hits of the year is the Dark Side of the Moon, a Speedmaster made almost wholly of black ceramic. The case, pushers, crown and even dial are made of sleek black ceramic. Though somewhat expensive for what it is, the Dark Side of the Moon is nonetheless one of the most talked about watches this year. Full story here. 3. Explaining the Seiko 9F quartz movements – proof that high-end quartz is not an oxymoron Seiko’s series of high-end 9F quartz movements, used primarily in Grand Seiko, are highly engineered marvels of micro-mechanics. Each 9F movement even has an individually selected quartz crystals with an integrated circuit specially programmed for that piece of quartz. See the rest of the story here. 2. Meet Prasart Vidhayapat, the man with 1000 watches Our second most read story is about a most extraordinary watch collection. Assembled by Thai businessman Prasart Vidhayapat over thirty years, the collection numbers over 1000 watches, and over 1000 clocks. The wristwatches run the gamut from low value Seikos to exceptionally rare vintage watches from Omega, like a platinum, skeletonised Speedmaster Moon Watch set with baguette diamonds. See the 1000 watch collection here. 1. A peek at an astounding, $15 million collection of contemporary horology And our top story of 2013 is another collector profile. Mainly focussed on modern haute horlogerie, spanning both established brands and independent watchmakers, this collection is eye-watering assembly of some of the most important timepieces of the last 10 or 15 years. From the AP Royal Oak Concept to Patek minute repeaters, from Dufour to Voutilainen, it’s all in there. Read the full story here. – SJX Follow us on Facebook, Instagram and Twitter for updates and news.