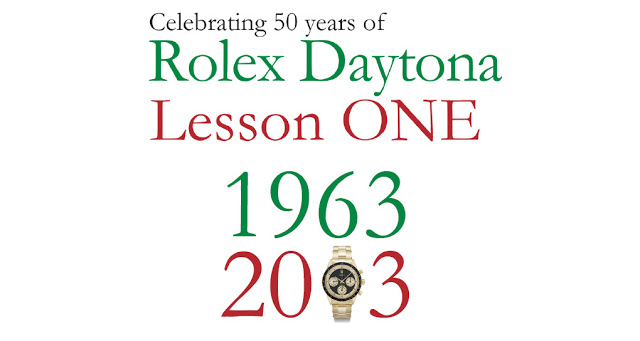 The Rolex Daytona “Lesson One” auction at Christie’s in Geneva last week set several new records, including a million dollars for a Paul Newman Daytona. Vintage Rolex dealer Eric Ku explains the reasons behind the prices for some of the sale highlights. An amazing US$13.2 million was raised at the Christie’s Rolex Daytona “Lesson One” sale on 11 November – from the sale of just 50 watches. Record prices were set for various Daytona watches spanning the model’s 50 year history.

For those unversed in the intricacies of Rolex Daytonas these stratospheric prices are mystifying. So we got Eric Ku, the proprietor of 10 Past Ten, a specialist in vintage Rolex watches, to explain a couple of special watches from the auction.

Based in Los Angeles, California, Eric is an expert in the fiendishly complex world of vintage Rolex and well versed in the minutiae which can add a zero to the price. He is also one of the individual who contributed the last lot of the auction, a brand new platinum Daytona, which was sold for charity.

Here are his thoughts on some highlights from Rolex Daytona “Lesson One”:

As mentioned in the sales catalogue the Rolex Daytonas in the sale all come with a lacquered red box and watch holder. Each [set is] individually labelled and [bundled] with a copy of the [hardbound auction] catalogue as well as a copy of Pucci [Papaleo’s] “Ultimate Daytona” book. [With the books] the winning bidders will always be able identify their watches as being part of this historic and landmark sale. 50 different Daytonas and 50 world records – simply unbelievable. [Editor’s note: Pucci Papaleo was co-curator of the auction, along with Aurel Bacs, Christie’s International Head of Watches.]

This “RCO” [Rolex Cosmograph Oyster] is the pinnacle of Rolex Paul Newmans and possibly the most coveted of all Rolex sports models. The rarity of these particular models is the fact that they were produced using the last of the previous generation of Paul Newman dials, hence the word “OYSTER” being added onto the dial in a different font.

Highly faked, I have sold three in my lifetime and can count around 10 examples known. The price achieved is a testament to its rarity and desirability, and being the most valuable of all “production” Daytonas. This rare example has been seen illustrated in Rolex literature in the late sixties.

The “Pulsometer” dial is a very rare dial, of which only two have been discovered. Made on special order for clients, the pulsation track allows medical doctors to properly and accurately read a patients pulse.

One can tell from the spacing of the sub-dials that this is in fact a completely different dial from a normal [Daytona dial], and that the pulsation track is not added subsequently to a regular dial. I personally don’t find this watch all that sexy, but it is nonetheless very rare.

The “Qaboos” Daytona is an example of the juxtaposition between rarity and condition. Made in a very small batch on request from the Sultan of Oman, this particular example is in new old stock unworn condition, and again featuring a specially made dial with not only the red Arabic script on the dial, but featuring “COSMOGRAPH” where “DAYTONA” usually is, as well as unique placement of the text “ROLEX OYSTER”.

Know as the “Deep Blue” and the “Chairman” Daytona, this is also another rare dial of which perhaps less than 10 are known. An unpopular design study shown to prospective retailers, the dials ended up being given as gifts by the management of Rolex.

Only a handful have managed to reach the marketplace and this is the first one offered at auction. Arguably the most beautiful of dials for gold Daytonas, this watch rightfully sits as the most valuable of all modern sapphire crystal Daytonas.

Perhaps the price realized on this watch was a result of “Daytona-Mania” more than anything else. Possibly ordered in rather large quantities and given as gifts to VIPs [by the Sultan of Oman], the causal observer will never know that there is the crest [of the Sultan of Oman] engraved on the case back – which adds approximately $105,000 to the value of an already coveted Daytona.

[Editor’s note: The above Daytona is otherwise identical to the regular steel Daytona, save for the Omani crest engraved on the case back.]

A beautiful production Rainbow Daytona which was announced at Basel in 2012. Made allegedly in 75 yellow gold and 75 white gold examples, the watch is no longer in the Rolex catalogue and is destined to be a future collectible.

[Retailing for] US$97,000, the watch is impossible to find at retailers and although priced at a premium [with this auction result] that the market does not yet recognize, I think the value will catch up within a few short years. The inspiration for this model is a limited series of men’s and women’s gold Daytona watches produced with rainbow sapphire bezels in the late eighties and early nineties.

“Its for the kids!” Literally!

The last lot of the sale was for [Children’s Action, a charity for children], and all proceeds, including the buyer’s premium, will be donated.

Still hard to find in normal retail channels, the platinum Daytona represents the ultimate status watch. It’s the first Rolex sports watch made entirely of platinum. Unique to this example is that it was the very first one delivered to Chronotime, the Rolex owned boutique in Geneva.