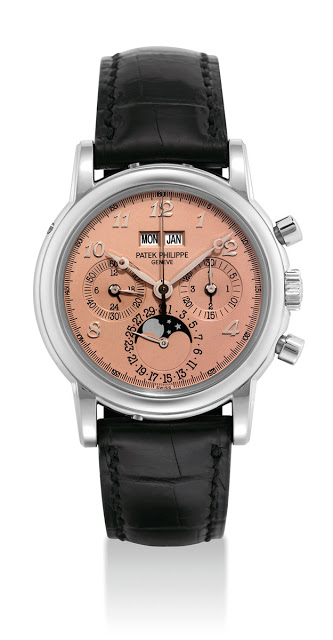 A impressive line-up of timepieces has been put together for the upcoming Christie’s “Important Watches” sale on 27 November in Hong Kong. The range is diverse, with plenty of the usual suspects. But a couple of timepieces stand out, including the Patek Philippe refs. 3970 and 5050 with Breguet numerals. Also notable is a pair of pocket watches from Thomas Engels, a little known independent watchmaker. Here are a couple of highlights from the sale, starting with something special for the ladies. A limited edition version of Cartier’s instantly recognisable Crash timepiece. Few ladies’ timepieces have achieved iconic status, but the Crash is certainly one of them. This particular version is in the white and set with diamonds.  Unlike most Crash watches seen recently at auction, which are special orders, this is a limited edition of 50 pieces and numbered 06/50. The edition was made to mark the 2006 reopening of the Cartier boutique at 13 Rue de la Paix in Paris. And then we have a few special Patek Philippe timepieces, out of the dozens and dozens which dominate the sale. And several of them sport Breguet numerals, which are often a good thing. The Patek Philippe ref. 5004A, a perpetual calendar split seconds chronograph in steel. The last 50 of the Lemania-based CHR 27-70 Q movements were put in steel cases, with the same 37 mm diameter as the precious metal versions. The watches were allocated to important clients of Patek Philippe, with delivery of the model still ongoing. Aside from the steel case, this is distinguished by the baton indices similar to those on the ref. 3970, whereas the typical ref. 5004 has Arabic numerals. As an indication how dear this watch will be, the estimate is nearly double that of the platinum ref. 5004P in the same sale. Created as a set of four towards at end of the production run of the ref. 3970, these watches are have Breguet numerals and hands, giving them a strikingly different – and far more attractive – look than the typical ref. 3970. The platinum and yellow gold versions are especially beautiful.  This quartet is presented in a wooden box for four timepieces, which is a separate lot in the auction. There is no information on how many sets were produced, but several sets exist. One of the most beautiful Richard Mille timepieces ever made, the RM012 movement has tubes in place of bridges, giving it an airy, architectural form. Made in a limited edition of 30 pieces, it was unbelievably (and unreasonably) expensive when new. And we conclude with some strong value propositions from independent watchmakers. Arguably the most recognisable timepiece from what was once a leading independent watchmaker. Designed by Daniel Roth himself while he was still with the company in the late nineties, the Papillon is a jump hours with wandering minutes, which is actually a variation of the same Maltese cross mechanism used in the AP Starwheel and Urwerk 103. It is a modest but elegant display inside the double ellipse case that was Daniel Roth’s trademark. Another form watch from another independent of the same period. A signature timepiece from the early (and glorious) days of Roger Dubuis in the distinctive Sympathie case. Using a Lemania 2310 base with a bi-retrograde perpetual calendar module designed by Mr Dubuis, the Sympathie is a beautiful timepiece, and importantly offers significant value for money. But the perpetual calendar mechanism, primarily because of the retrograde displays, is delicate and expensive to repair. A chemist noted for his work in plastics and polymers, Professor Thomas Engel was also a watch collector and scholar of Breguet, having published a book on the French horologist. He is not widely known but was an accomplished watchmaker, having made high quality pocket watches from the seventies to eighties, with various functions and complications, but all in the Breguet style with guilloche dial and pomme hands.  All of Engel’s pocket watch used the Zenith 5011K observatory chronometer movement (most recently found in the enormous Zenith Aeronef Type 20), which he modified and finished. His tourbillon pocket watches contain the Zenith movement as well, with the tourbillon regulator made by independent watchmaker Richard Daners.  Both of these pocket watches are examples of high quality, classical horology for comparatively little money. The auction will take place on 27 November 2013 at the Hong Kong Convention & Exhibition Centre, with viewings taking place in the week before that. The rest of the catalogue is available on-line at Christie’s. – SJX