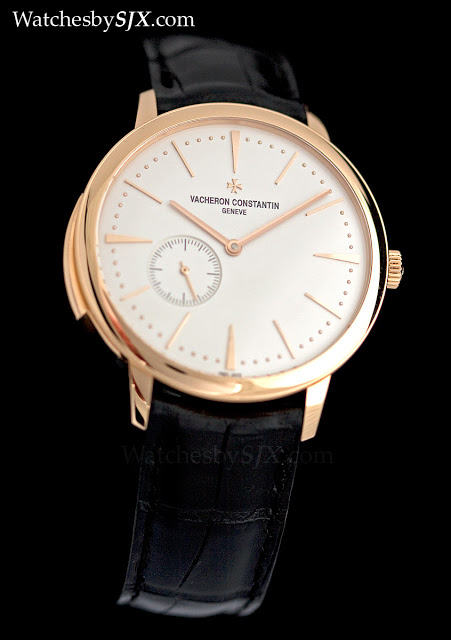 Named for the birth year of its founder, the new Vacheron Constantin Calibre 1731 measures only 3.90 mm. And as a complete watch, the Patrimony Contemporaine Ultra-Thin Calibre 1731 is only 8.09 mm thick, making it the thinnest minute repeater.

Vacheron Constantin has a significant modern history with minute repeaters, thanks to the cal. 1755, unveiled in 1992. At 3.28 mm high, it was even thinner than the new cal. 1731. The cal. 1755 was one of the few in-house minute repeater movements offered by a major brand in the nineties, and well regarded by collectors. The last watches with the cal. 1755 came in 2010, a year after VC commenced development of the cal. 1731.

While its predecessor was classically styled, in fact it was based on a vintage VC repeater movement, the new cal. 1731 is a distinctively modern creature. Much of the gear train is revealed, as is the spring which powers the minute repeater. Pulling the slide on the case winds up the spring, and releasing the slide causes the spring to unwind. The rate at which the spring unwinds is regulated by the silent governor, a gold-plated, cross-shaped device which sits to the left of the repeater hammers.

As the spring unwinds, the governor begins to spin, causing its pair of wings to spread, thus acting as an air brake, and preventing the repeater spring from unwinding in an uncontrolled manner. And because the governor uses air as to slow its motion, it works silently, eliminating the buzz common in older repeater movements.

Regulator aside, this watch rates highly as a repeater. Its chimes (this watch is a prototype) are loudish, pleasant and clear. VC says the production pieces will sound even better. The minimalist bridges of the repeater also reveal much of the base plate, especially around the repeater hammers, giving the movement a widely spaced and airy feel. Combined with the free-sprung balance (hence the lack of a regulator index), the cal. 1731 has the characteristic appearance of a movement conceived recently. VC has, however, gone the traditional route for the movement decoration, which is to say very, very good. All components are properly and attractively finished; the movement is Geneva Seal certified as well. Notable details include the tightly and evenly spaced perlage of different diameters on the base plate. Another, more obvious, detail are the inward corners on the bridge edges which demonstrate beautifully executed anglage. That being said, not all the corners on all the bridges are finished in this manner. The rounded lines on certain bridges are less attractive, and more synonymous with modern milling and finishing. That brings us to the obvious question: how does this compare to the competition in terms of finishing? Patek Philippe’s top-end repeaters like the ref. 5016 are better, slightly but evidently, with their lavish and almost luminous surface finishes.  From the front the contrast is stark, compared with the view of the movement. Styled like the rest of the Patrimony Contemporaine line, the dial is elegant but plain. The sole element on the dial which is unconventional is the seconds sub-dial, positioned at a quirky eight o’clock. According to Vincent Kauffmann, the Design Director at VC, because of the movement layout, two options were available for the placement of the sub-dial, six and eight. The latter was chosen to give the design a unique twist, and to differentiate the repeater from the regular models. Though it is simple, the watch is 41 mm in diameter. With its thin bezel and extreme slimness, it seems larger than it actually is, giving it good wrist presence. Available only in rose gold for now, the Patrimony Contemporaine Ultra-Thin Calibre 1731 costs €270,000 before taxes, or about US$365,000. – SJX