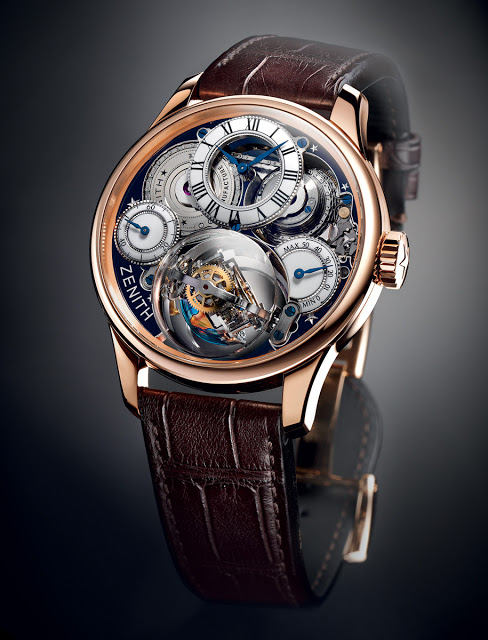 Zenith has just unveiled the Academy Christophe Colomb Hurricane Grand Voyage. This limited edition features a movement with a gyroscopic escapement and a chain and fusée, with lavish decoration in enamel, hand-engraving and miniature painting. The most complicated timepiece from Zenith is the Academy Christophe Colomb Hurricane, which boasts its patented a gyroscopic escapement as well as a chain and fusée constant force mechanism.  Now Zenith has taken the Christophe Colomb Hurricane, layering on extravagant hand decoration depicting Christopher Columbus, to create the Grand Voyage. Mechanically the Grand Voyage is identical to the plain Hurricane, and uses the same 45 rose gold case. At six o’clock sits a gyroscopic escapement, a complex, gimbal-like contraption designed to keep the balance wheel horizontal at all times.

That ensures more regular timekeeping, because the watch only needs to be regulated in one position, and by eliminating all gravity-induced errors.

Whereas in the Hurricane the counterweight of the gyroscopic escapement is unadorned, in the Grand Voyage the half-sphere counterweight is decorated with the Southern Hemisphere in miniature painting.  The lavish decoration continues throughout the watch, in parts big and small. All the sub-dials on the face are white enamel over solid gold plates. Surrounding the sub-dials is the hollowed-out base plate with the Zenith logo and stars in relief, which has been filled with blue lacquer. Beneath the sub-dials the chain and fusée mechanism for constant power transmission is visible. Even more ornate is the back of the watch, with a large gold plate covering the movement. With the background in blue lacquer representing the sea and sky, the plate is hand-engraved and then enamelled in the champlevé technique. It depicts Christopher Columbus and his flagship, the Santa Maria. And at the very top of the movement, above the sails, one of the gears of the movement has been cleverly integrated into the motif, and represents the sun rising over the horizon. Earlier this year Cartier unveiled the Tank MC, the newest addition to the century-old Tank family. Equipped with an in-house skeleton movement inside a palladium case, the Tank MC is Larger and wider than other Tank models. Undoubtedly one of the definitive form watches, the Cartier has been going strong, in its myriad shapes and sizes, for nearly 100 years. Cartier made a major new addition to the Tank family in 2013 with the launch of the Tank MC (MC is short for Manufacture Cartier), a large, rectangular wristwatch designed for the male watch buyer. The Tank MC is available as an entry-level model with the in-house 1904 MC movement, and also as part of the high-end Fine Watchmaking line in the form of the Tank MC Skeleton. The only Tank watch with a skeleton movement currently in the collection, the Tank MC has a palladium case and the 9611 MC skeleton movement. This is the same calibre found inside the Santos 100 Skeleton, likely the best selling Fine Watchmaking model.

Developed by Cartier’s talented technical head Carole Forestier, the 9611 MC is a simple, manual-wind movement with double barrels and a practical 72 hour power reserve.  Though mechanically uncomplicated, the beauty of the 9611 MC movement lies in the shape and finish of its bridges and base plate, which form oversized Roman numerals. These open-worked numerals have become the signature of Cartier skeleton watches. Both the bridges and base plate share the same finishing, straight grained on top with highly polished bevels. The polished bevels, also known as anglage, is artfully executed and impeccable up close, though it has to be said the corners of the bevels are rounded, rather than sharp (Philippe Dufour’s Simplicity is an example of world-beating anglage). The latter is a far more complex and costly form of finishing.

The Tank MC measures 43.9 mm long by 39.1 mm wide, making it more squarish than the typical Tank wristwatch, which tends to be oblong. Though the case is not especially large or thick, it has a reassuring weight due to the density of palladium. Being part of the platinum family of metals, the palladium case also has the white sheen associated with these alloys. And for the ladies, the Tank MC is also available with diamonds set on both brancards of the case.