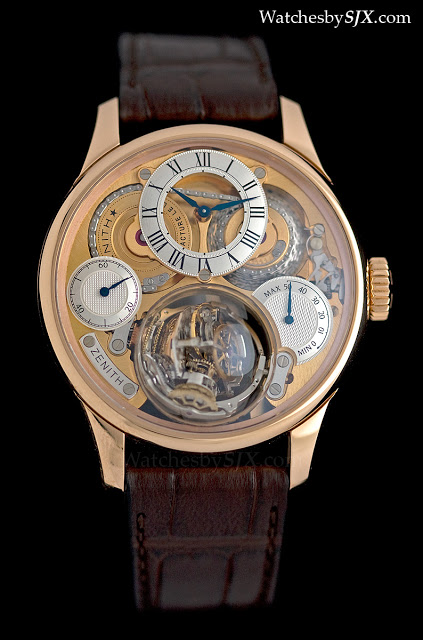 While Breguet’s tourbillon was conceived to average out the errors caused by gravity’s influence on the balance wheel, the Zenith Christophe Colomb Hurricane entirely eliminates such position errors by keeping the silicon balance wheel horizontal at all times. The Christophe Colomb is not a multi-axis tourbillon like the Jaeger-LeCoultre Gyrotourbillon, rather it has an incredibly complicated double-axis gimbal suspension for the escapment, what Zenith terms a gyroscopic escapement. One conceivable downside of the mass of gearing to keep the balance wheel horizontal is efficiency. All of those 173 components in the gyroscopic escapement generate friction.

Nevertheless, the Christophe Colomb Hurricane still manages a respectable 50 hour power reserve. And the torque delivered by the mainspring is relatively constant, thanks to a chain and fusée mechanism; hence the moniker “Hurricane”, the regular model is merely the “Christophe Colomb”. When fully wound the chain is entirely wrapped around the cone-shaped fusée. As the mainspring unwinds the chain unwraps from the fusée, starting from top to bottom, and winds itself around the barrel.  Though this process the power delivered by the fusée to the gear train is constant (the fusée receives its power through the chain, from the mainspring), due to the wider radius of the fusée at its bottom. Of all the forms of a constant force mechanism, the chain and fusée is the most voluminous, so it is a feat that Zenith managed to cram it into the movement. And the chain and fusée is also the most archaic solution to constant force. When combined with the gimballed escapement, the result is a curious, but impressive, combination of nineteenth century solutions to the positional errors in the balance wheel. Notably the Christophe Colomb Hurricane now demonstrates a much higher level of movement decoration than on the earlier Christophe Colomb watches. The bevelling on the bridges is attractive, as is the graining and perlage of the base plate.