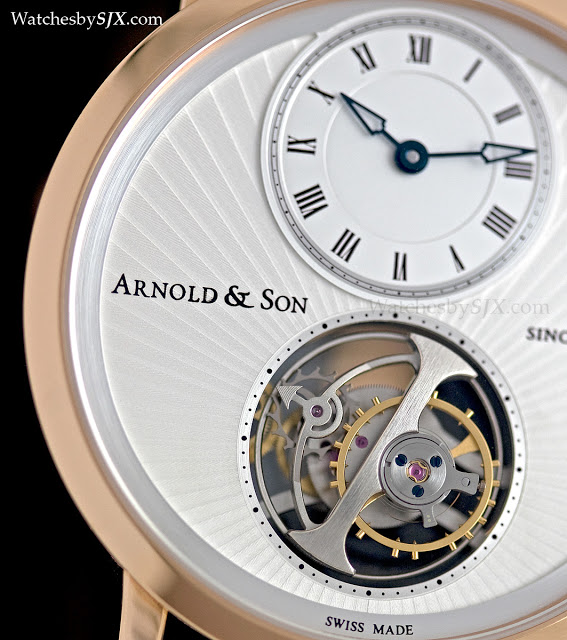 Despite looking like yet another pedestrian flying tourbillon, the Arnold & Son UTTE (short for “ultra-thin tourbillon escapement”) is noteworthy. Its case stands 8.34 mm high, and the movement inside, the cal. A&S8200 developed by its sister company La Joux-Perret, is only 2.97 mm. That is no mean feat, considering the movement manages an 80 hour power reserve with twin barrels, just over three days. And even more so given the large 14 mm tourbillon cage. The 2.97 mm high movement does not include the tourbillon cage, which is slightly convex. According to Arnold & Son, the decision to raise the cage was an aesthetic one, to give a better view of the tourbillon regulator. This adds depth and detail to an elegant, but plain, dial. Turn the watch over and the movement is revealed. It is attractively decorated with a three-quarter plate in German silver, but because the plate is rhodium-plated, does not have the characteristic hue of maillechort. The tourbillon bridge, on the other hand, is hand-engraved. This adds a welcome decorative touch. Though the movement is well finished and good looking, it is not striking. Two versions are available, rose gold or palladium, with each limited to 50 pieces.  Price-wise the UTTE is reasonable: the rose gold retails for SFr68,420 (~US$75,300) while the palladium is SFr59,400 (~US$65,300). For an entry level tourbillon the UTTE delivers a more novel proposition than the vast majority of its competitors in the segment. – SJX Hands-on with the Arnold & Son HM Perpetual Moon, the wristwatch "Supermoon" (with live photos and price)