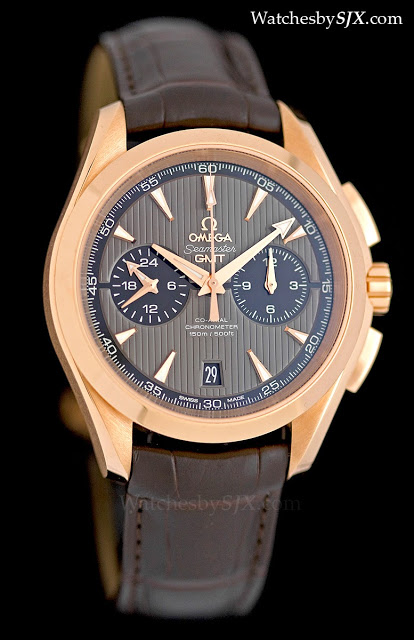 Launched at Baselworld 2013, the latest generation of the Omega Aqua Terra Chronograph GMT is the best looking yet. And it has all the qualities which distinguish recent Omega watches, namely an impressive in-house movement as well as a superb dial and hand quality. Omega has made great strides in product design and quality in recent years, and its line-up at Baselworld 2013 demonstrated this; the unsurprising collector favourite was the Speedmaster “Dark Side of the Moon” in black ceramic, and the antimagnetic Aqua Terra >15,000 Gauss is a major techical accomplishment. Not receiving much press is the new Aqua Terra Chronograph GMT, which is a shame. None of the other Aqua Terra models, past or current, ever appealed to me, but the Chronograph GMT is very compelling, especially in red gold with grey dial. Large and chunky at 43 mm wide and 16.9 mm high, and the red gold version is extra hefty, but it nevertheless sits comfortably on the wrist. The Aqua Terra Chronograph GMT is equipped with the cal. 9605/9615, which has all the bells and whistles Omega has crammed into its latest generation of movements.  Inside the rose gold model is the cal. 9615 Co-Axial movement with a rose gold rotor and balance bridge, while the steel model has the cal. 9605 with those components in rhodium-plated brass.  Besides the gold components, both movements are identical and boast most of the innovations which Omega’s massive investment in movement development have brought about. Most notably, the cal. 9605/9615 has the silicon Si14 hairspring with a free-sprung balance wheel, NIVACHOC shock absorber and Co-Axial escapement. And naturally the chronograph has a column wheel as well as vertical clutch, now the standard practice for contemporary, mid to high-end chronograph movement construction. As with the other Omega movements in this series, like the more common cal. 9300 (which is identical but sans GMT function), this movement is attractively finished, but evidently made on a large scale. Though attractive, it is exceptionally refined visually, rather it is an example of the superb quality and engineering possible only with the very largest of watch companies.  The movement is visible from the display back so you can judge for yourself. Though no photos of the back are available, the view is identical to what you find with the cal. 9300/9301 as found in the Speedmaster “Dark Side of the Moon”.

Omega’s recent movements are widely regarded as impressive. What has been overlooked are the dial and hands. These receive little attention but Omega has improved them tremendously, as demonstrated in my photo essay of last year’s De Ville Chronograph.  The Aqua Terra Chronograph GMT is elaborately conceived. The dial is lacquered grey (and a striking blue for the steel model pictured below), with a embossed vertical guilloche on the central portion, surrounded by a recessed minute track in black which frames the dial.  Evident under magnification is the admirable quality of printed text on the dial; with neat edges and no bleeding. The applied logos in gold are beautiful details as well. But especially beautiful are the diamond-cut, applied indices, which are all solid gold on the red gold models. Likewise the hands are made from solid gold, as well as diamond-cut and brushed. The indices and hands are of outstanding quality, with sharp and well defined edges characteristic of diamond-cut metal. This is further proof that Omega makes some of the best quality dials and hands in its price segment, and probably in the segments above too. Beautiful as the dial is, its usability is questionable. The GMT hand is co-axial with the constant seconds hand in the sub-dial at nine o’clock. Its size as well as the similar length of the markers on the GMT sub-dial mean that the second time zone is difficult to make out. Even more illegible is the chronograph sub-dial at three o’clock, which contains the elapsed minutes and hours. Because both the hours and minutes use similarly sized dauphine hands, they are practically impossible to distinguish. Practicality aside, this is a handsome and well made timepiece with a level of fit and finish that puts it in front of most of the competition.