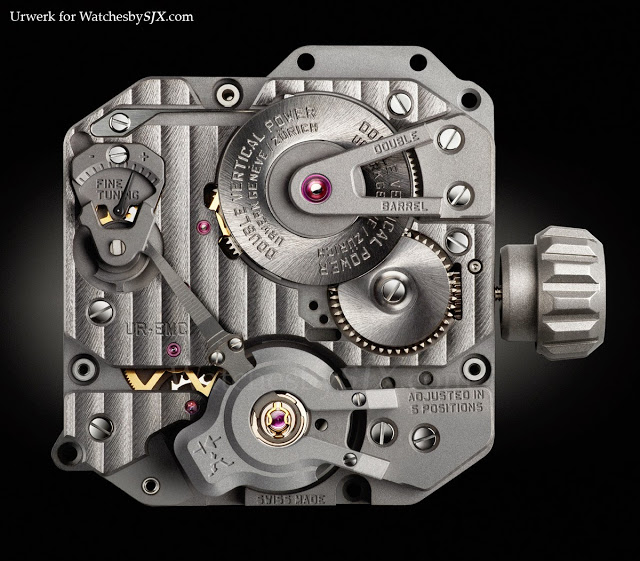 Urwerk watches have always had some sort of feature which allows some interaction with the wearer. The UR-210 for example has an activity indicator that shows the difference between power reserve generated and consumed. The new Urwerk EMC takes that idea to an entirely new level, thanks to a novel combination of mechanical watchmaking and electronics.

The timekeeping part of the EMC movement is entirely traditional. It has a Swiss lever escapement, with an in-house balance wheel in ARCAP, a non-ferrous alloy. Urwerk designed the balance wheel to optimise aerodynamics and amplitude in all positions.

Additionally, the movement has twin mainsprings, mounted on the same axis, but in separate barrels.

And the user interaction comes in the form of a timing screw on the back of the watch, which the wearer can use to adjust the rate of the movement, by changing the active length of the balance spring, much like what a watchmaker would do during regulation.

How much the wearer should tweak the rate is indicated by the electronics of the movement. This comprises three components:

3. An integrated circuit which calculates the difference between the actual rate of the balance wheel, and the reference rate set by the electronic oscillator. The difference is then displayed on the back of the watch. No battery is needed for the electronics of the EMC, instead it is powered by a hand-operated generator which charges a capacitor.

So how it would work is simple: the wearer needs to crank up the generator, and then press a button to start the electronic monitoring system. The difference in rate is displayed on the indicator, which allows the wearer to adjust the rate of the mechanical movement as necessary.

From what I understand, the price of the EMC will be in the UR-110 ballpark (in the region of US$75,000 to US$100,000), rather than that of the UR-210. Interestingly the EMC is somewhat similar in concept to the Seiko Spring Drive, except that the Spring Drive is entirely autonomous, requiring no user adjustment. The Spring Drive has an integrated circuit which measures the rate of the balance, and also an electromagnet which accelerates or brakes the balance to maintain a constant frequency. The EMC is the latest creation from the boffins at Urwerk. Comprising a manually wound movement, as well as an electronic rate monitor, the EMC is the first mechanical wristwatch which allows the user to regulate the watch.