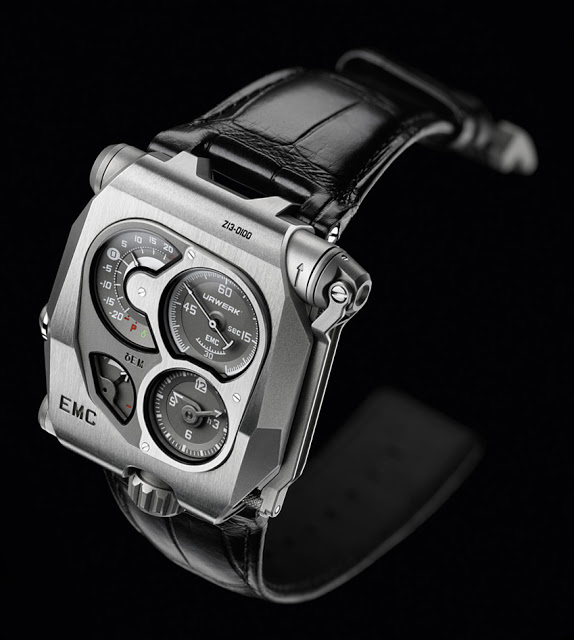 Urwerk first showed me a preview of the EMC movement prototype in Geneva earlier this year, before presenting the movement for the first time in May. Now the EMC wristwatch is finally revealed: a mechanical wristwatch with a built-in electronic rate monitor as well as user regulation device. The chunky case sticks to Urwerk’s traditional aesthetic, with the indications arrange in separate sub-dials. But the EMC departs radically from the Urwerk tradition in one major aspect: this is the first Urwerk wristwatch (excluding the Goldpfeil chronometer) with traditional hour and minute hands.

At the top left is the rate variation display, measured from -20 to +20 seconds. To its right is the constant seconds hand, and below that the hours and minutes. At the bottom left is the power reserve indicator. The in-house EMC movement, visible through a display back (another first for Urwerk), is composed of two distinct parts. On the one hand it has a hand-wound movement with a Swiss lever escapement, powered by twin, stacked barrels which unwind in series for a flat torque curve. Where it gets interesting is the escapement. Made in-house from an Arcap alloy (Arcap is a type of nickel-copper alloy), the balance wheel is flat and smooth, with a cut-out in the middle.

Mounted above the balance wheel is a tiny LED light, paired with an optical sensor below the balance. The sensor then measures the frequency of the balance wheel oscillations based on the light received from the LED above. An integrated circuit, with an attached quartz oscillator which acts as a reference timekeeper, then measures the actual rate variation of the movement against the quartz reference. The result is subsequently displayed on the rate variation sub-dial in front. The whole movement is self-contained, with no need for an external battery. The integrated circuit gets its electricity from a tiny kinetic energy generator powered by a hand-crank which can be folded out from the watch case; according to Martin Frei, the crank is inspired by film SLR cameras. According to Felix Baumgartner, the brand’s co-founder, the desire for a user adjustable timepiece started with the Urwerk 103, which had a screw for adjustment, but no way to monitor the rate of the watch. The inspiration for the EMC came from the Witschi timing machine Baumgartner uses to regulate Urwerk timepieces. Baumgartner’s goal was to integrated a Witschi-like device into a movement to give the wearer the ability to regulate the timepiece, as he does for new watches at the workshop. All the owner needs to do is to crank up the generator – five to ten turns is enough for about five rate comparisons – and then press the button at nine o’clock of the case. The rate variation will then be shown on the sub-dial. With that information, the wearer then turns a tiny screw on the back of the watch to speed up or slow down the rate. Now In Black DLC, The Self-Monitoring Urwerk EMC (With Specs And Price)

The world's first mechanical wristwatch with an electronic rate monitor and user adjustability, the Urwerk EMC is now available with a DLC-coated steel and titanium case in the brand's signature all-black aesthetic.