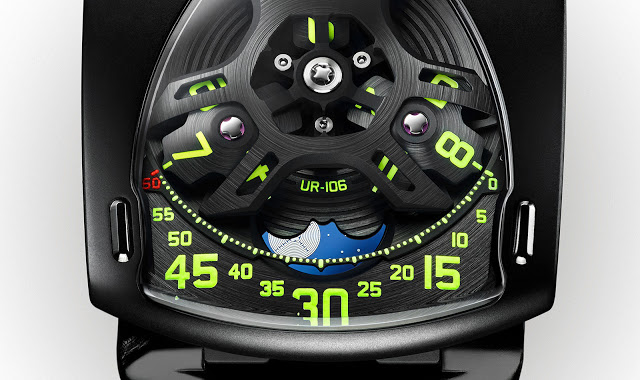 Urwerk has created a one-off variant of its UR-106 for charity auction Only Watch, clad in its trademark colours with a black coated case and bright green Super-Luminova. Urwerk‘s one of a kind timepiece for Only Watch 2015 is paradoxically a masculine version of the recently launched UR-106 Lotus ladies’ watch. The UR-106 Only Watch features the same case and movement, except it’s entirely finished in matte black, with striking green numerals and markings on the dial. The UR-106 Only Watch has a steel case with matte, sandblasted finish that’s been coated with a black ceramic. The face of the watch retains the dark look, but with more texture. The carousel for the hour satellites has a circular brushed finish, while the base plate is engraved with concentric lines. At six o’clock an aperture reveals the moon phase, made of a lapis lazuli disc with a moon that’s actually metal deposited in a maze-like motif. Measuring 35mm in diameter and 49.4mm long, the UR-106 is a small watch by Urwerk standards, just slightly smaller than the UR-103. By comparison, the flagship UR-210 is some 44mm wide and 54mm long. Urwerk is just one of several eminent independent watchmakers taking part in Only Watch, a charity auction set up to raise funds for Duchenne muscular dystrophy research. It takes place on November 7, 2015 in Geneva, with 43 unique timepieces going under the hammer, including creations from fellow independents like MB&F, F.P. Journe and Voutilainen.