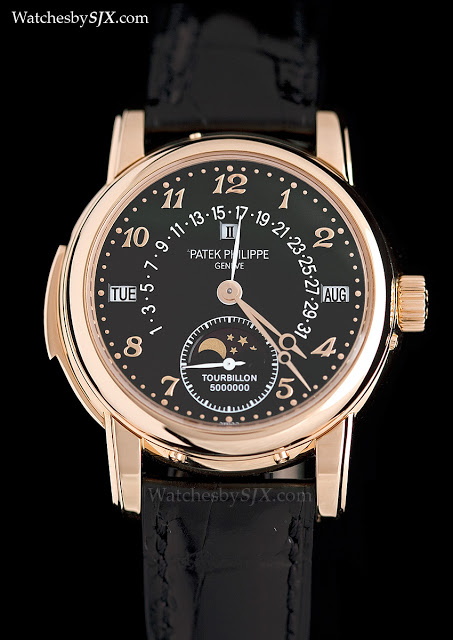 Equipped with minute repeater, tourbillon and perpetual calendar, the ref. 5016R Grand Complications was the most complicated Patek Philippe wristwatch until the introduction of the Sky Moon Tourbillon ref. 5002. Unlike the current Patek Philippe offerings with silicon bits like the ref. 5550P, the caliber RTO 27 PS QR (Repetition minutes, TOurbillon, Petit Seconde, Quantieme Retrograde) inside the 5016 is pure tradition. The finishing is peerless. It demonstrates why Patek Philippe, at least for its grand complications, is at the top. Cartier and Piaget for instance make minute repeaters with technically flawless finishing, but they lack the artistry of the Patek. To be fair Patek repeater costs significantly more than comparables from the competition. The most delicious detail of the 5016 is the centre wheel with its rounded and polished spokes shaped like an octopus. And if one has to nitpick, the obvious shortcoming is the machine applied bevelling for the Calatrava cross of the repeater regulator; notice its rounded rather than sharp corners. Without a doubt, this is one of the most spectacularly finished minute repeater watches out there. And the sound is of course magnificent. Some desirable and much hyped Patek watches can be disappointing, but alongside the ref. 5101P tourbillon, the ref. 5016 represents the high art of watchmaking. – SJX