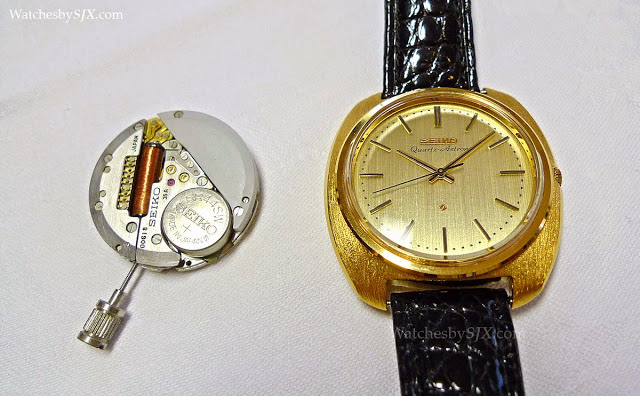 Found solely in Grand Seiko watches and a handful of limited editions (like the recent antimagnetic Grand Seiko), the Seiko 9F family of quartz movements was introduced in 1993, with the goal of the being the best quartz movement possible, not merely in terms of timekeeping, but also in the display of time.

Seiko pioneered the quartz watch in 1969 with the Astron, and in doing so changed the watch industry. Designed by a team led by engineer Kuniharu Natori, who recently retired as Manager of Watch Movement Design and Engineering at Seiko Epson, the calibre 95GS of 1988 was the first quartz movement used in a Grand Seiko.

Five years later the same team presented the 9F quartz calibre, which built on the developments of the 95GS. Even though the 9F is now 20 years old, it still remains one of the most refined quartz movements anywhere, not only in terms of finishing and craftsmanship – it is hand decorated and assembled just like a mechanical movement – but in terms of construction.

With a maximum deviation of +/- 10 seconds a year – the typical mechanical watches manages that in a day – the 9F is extraordinarily accurate. And that performance applies to the mere entry level 9F movements. Specially regulated 9F movements used in some limited edition Grand Seiko models, distinguished by a five-pointed star on the dial, are rated to +/- 5 seconds a year.

That extreme accuracy begins with the quartz crystal that is the heart of a quartz movement, the equivalent of the balance wheel in a mechanical calibre. A quartz movement runs on a basic principle – run a current through a quartz crystal and it will vibrate at a precise frequency that acts as a regulator. Seiko makes its quartz crystals in-house, growing them in massive autoclaves that are some four stories high.

Over a period of two to six months, the seed crystals, which are long and flat, grow inside the autoclave, at 360 ℃ and under pressure of 1100 to 1700 kg/cm2, eventually growing into chunky blocks which weight several pounds. Each of these quartz crystal is then checked by hand for any imperfections.

After the crystals are machined into necessary size for a quartz oscillator, a 90-day test begins. Each quartz crystal oscillator is tested individually, mainly to ascertain the regularity of its frequency. That’s because quartz oscillators vibrate at extremely high frequencies, that frequency may change every so slightly with temperature and time. The best performing oscillators are then selected for use in 9F movements.

Each quartz oscillator is then paired with an integrated circuit specially programmed for that particular oscillator’s frequency and behaviour, to ensure the resulting 9F movement keeps the best possible time.

Consequently, the time display mechanism of the 9F was designed to be up to the task of indicating such accurate time. Several features were designed into the 9F movement to this end. One is the backlash auto-adjust mechanism, essentially a tiny spring linked to the second wheel to minimise backlash and play between the hands.

And not only are the hands precise, but also much more substantial – thicker and wide – than on ordinary quartz watches. Made possible by a twin-impulse motor, the hands are identical to those on a mechanical Grand Seiko. Normal quartz watches with single-impulse motors have insufficient torque to move such heavy hands.

In addition, spacers are mounted for both the minute and hour hand pinions to ensure that neither interferes with the motion of the other. All of the three hands on the watch are on genuinely independent axes.

Precision of display extends to the date, which is instantaneous. Both the day and date (some models have only a date) jump simultaneously at midnight, completing the jump within 1/2000th of a second. This is thanks to simple, four part date mechanism with a long lever that causes the date disc to jump.

Made to last forever And then there is the movement construction, entirely conceived with longevity in mind – which runs contrary to the prevailing opinion that a quartz watch is essentially disposable.

All the vital parts of the movement are sealed in dust-proof enclosures. This is important since quartz watches are opened up regularly for battery replacement, and especially relevant for the central enclosure which houses the gear train, explaining the visible jewels. This not only keep the gear train clean, but also helps keep it running well by preventing lubricants from migrating elsewhere.

The attention to detail extends to the electromagnetic coil of the motor as well. The coil block is sealed, so as to prevent damage to the copper wires – this is a common occurence during battery replacement.

Additionally, the copper wires of the coil are wound in a regular manner, while in a typical coil is is almost random.