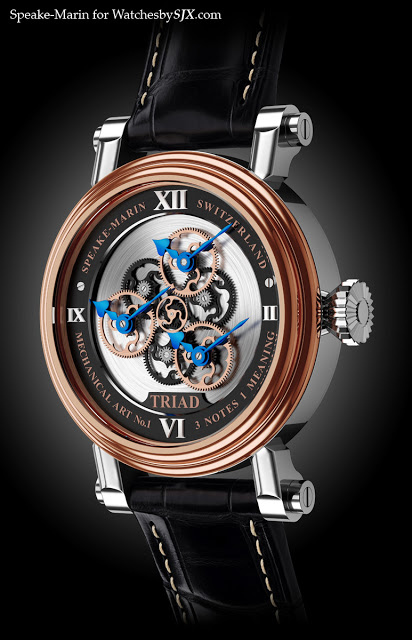 The first watch in the new Mechanical Art Collection from Speake-Marin, the Triad features three sets of hands. An open dial reveals the gears driving the hands. Peter Speake-Marin has just announced the peculiar looking Triad, a limited edition wristwatch with three sets of hands. This, however, is not a triple time zone watch, all the hands are synchronised and show the same time. The hands, which are in blued steel, are driven by rose gold-plated gears shaped like a topping tool, the Speake-Marin logo. And in the centre is a seconds hand similarly shaped like a topping tool. Below the gears is the brushed, rhodium-plated base plate of the Eros 2 calibre, made from German silver. Based on the TT 738 movement from Technotime, the Eros 2 has a five day power reserve and is fitted with the Speake-Marin signature mystery rotor in the form of a blued steel topping tool. And the text on the dial refers to the three-note chord in music called a triad, played simultaneously for a single tone, hence the “3 NOTES 1 MEANING” on the lower right quadrant of the dial. The case is the 42 mm Piccadilly case, with a red gold bezel. This is a limited edition of 88 pieces. This is a strange watch that is quite far removed from the typical Speake-Marin. As with all Speake-Marin watches I am sure the materials and build is superb, but I’m not quite sure what to make of the aesthetics. – SJX 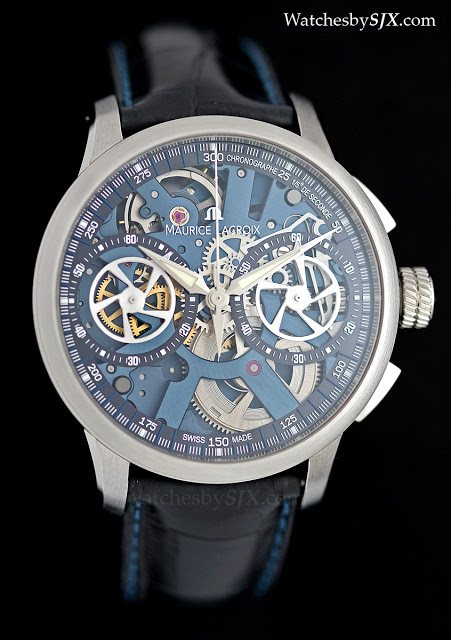 The Le Chronographe Squelette is Maurice Lacroix’s flagship chronograph with  sapphire dial and a coloured movement treatment. It is a two-counter, manual wind movement with column wheel. Inside is the ML106, a large and attractive looking movement, developed with the help of Andreas Strehler, best known for the Perpetual One movement he created for H. Moser.

This is the skeletonised version of the ML106. Its striking appearance comes from the blue nickel coating on the movement bridges and base plate. Beyond the colour, the movement is also well finished. The steel levers of the chronograph are nicely done, as are the skeletonised discs for the sub-dials. There is room for improvement in some areas, however, like on the gold-plated chronograph wheels. First unveiled in 2006, the ML106 uses some components of the Unitas 6497 like the gear train. It has some obvious traditional elements like the two gold chatons as well as the swan neck adjustment.

But it has several notable features. The elapsed seconds hand can be read more precisely thanks to the 300 teeth of the centre wheel, which correspond to the 300 fifth-of-a-second increments on the dial for the seconds. The fineness of the teeth means the wheel has to be made by photolithography at Mimotec, instead of the usual method of milling.

Another is the release lever which minimises the play between wheels when the chronograph is reset. Also worth mentioning is the crown, which has a clunky locking system which requires the user to half-turn and align crown markings in order to screw the crown down.