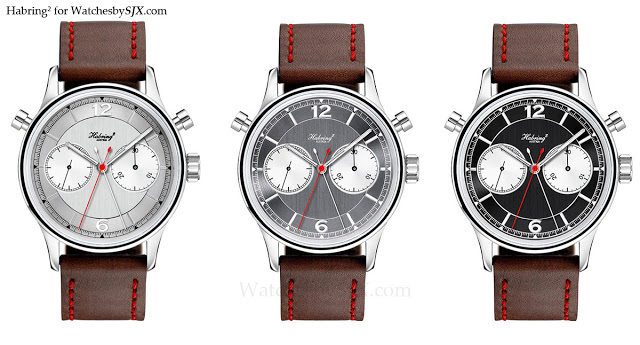 Last year Habring² presented the Doppel 2.0, which was based on the simplified split seconds chronograph built on a Valjoux 7750 base that Richard Habring developed at IWC. It was a success – the limited edition of 20 pieces sold out quickly and the Doppel 2.0 also won the Sports Watch Award at the Grand Prix d’Horlogerie de Genève 2012. So it is no surprise that Habring² has just announced the Doppel 3. The biggest upgrade is that the Doppel 3 is now a monopusher chronograph – the button at two o’clock controls the start, stop and reset while the button at ten o’clock is for the split seconds hand. In addition the Doppel 3 is available with options like complete calendar, central minute counter or moon phase, thanks to the modular system of upgrades offered by Habring². The Doppel 3 is available in silver, black or grey, with red and silver hands, in the style of 1960s  sporting stopwatches. Only 20 pieces will be made per year, with each engraved with the serial number as well as year of production, with a retail price of EUR6750. – SJX

News: Habring² Doppel 2.0 for the anniversary of the Doppelchronograph