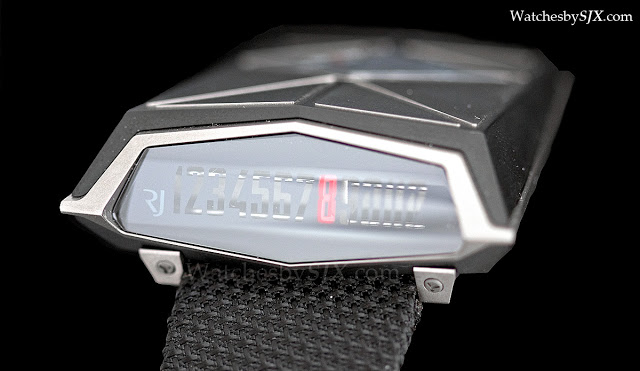 A few weeks ago Romain Jerome unveiled a teaser showing its CEO Manuel Emch, Jean-Marc Wiederrecht and Eric Giroud. I finally got to see the new watch, the Spacecraft, in January – and I loved it. Coming from the company best known for its infamous and oft derided rusty Titanic DNA watches, this is a surprising product with respectable horological credentials. This is a retrograde, jumping hour with hours on the front and minutes on top, at a surprising price point. Styled like a driver’s watch, the Spacecraft has a jumping hours with linear retrograde mechanism, an unusual complication that is right up Mr Wiederrecht’s alley.

The outline of the hour numerals from one to 12 are on a sapphire crystal with a red disc (highlighted in red below) that that jumps each hour to indicate the current time. The disc travels on twin rails, shown in blue. Once it reaches 12, the disc jumps back to one. Based on an ETA 2892, the movement is automatic with a 38 hour power reserve. As is his habit, Mr Wiederrecht has movement parts styled according to the theme of the watch. Here he has incorporated bridges shaped like space ships into the movement. Designed by Eric Giroud, who is responsible for many of the MB&F Horological Machines amongst others, the case is black PVD coated titanium, with sandblasted, triangular titanium inserts. It looks like the IM Pei designed Bank of China Tower in Hong Kong.

The black PVD outer case is screwed onto an inner titanium case which holds the movement, while the lugs are screwed onto the bottom plate of the case. And on the top of the case, the minutes are displayed under a trapezoid sapphire crystal with a rotating disc. Though it is sizeable at 50 mm by 44.5 mm, and 18.5 mm high, the watch feels slim and lightweight on the wrist. It is fitted to a polyamide mesh strap, with a titanum buckle, that is well suited to the aesthetic of the watch. The inevitable comparison is with the MB&F HM5 On the Road Again. Both watches are similar overall, but decidedly different in their details and execution. Limited to 99 pieces in black PVD titanium, the Spacecraft has an estimated retail price of CHF21,900, or about USD23,800, which is surprisingly accessible. In this particular segment of avant garde independent watchmaking, this is a competitive price. According to Mr Emch, the Spacecraft is the first of a whole new collection for Romain Jerome. This watch signals a new direction for RJ, which will certainly appeal more to serious minded collectors than many of the brand’s earlier products.  RJ CEO Manuel Emch sums well in the official press release (Italics added for emphasis), “The concept we have created with this collection reflects a new approach for the brand, meaning facilitating access to innovative, contemporary and offbeat watchmaking.” – SJX