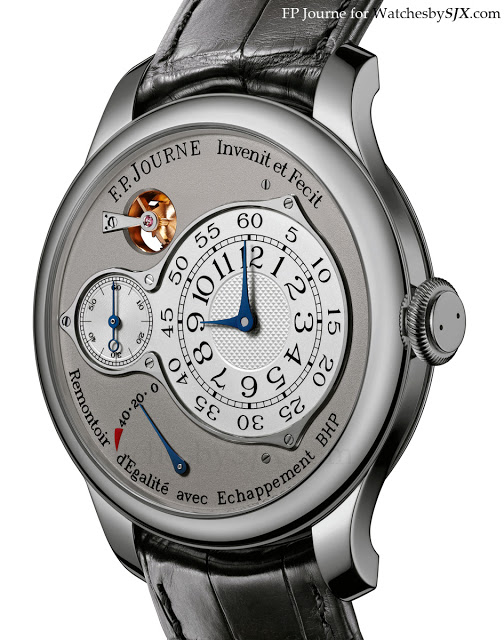 Visible from the dial at 11 o’clock is the constant force mechanism, just as with the early generation, brass movement Journe tourbillons. And unlike in the tourbillon where it is steel, in the Chronomètre Optimum the remontoir spring is in titanium.

And over on the back is the dead beat seconds, linked to the remontoir. The other notable feature of the calibre is the bi-axial, direct impulse escapement. With the twin escape wheels and anchor in titanium, the bi-axial escapement is lubrication free and also has constant amplitude for the first 50 hours of power reserve (the total power reserve is 70 hours). And the movement is also equipped with a free sprung balance and hairspring with Philips curve. Such escapements are the flavour of the day with independents; this Journe escapement seems to operate on similar principles to the escapements in the Laurent Ferrier Galet Micro Rotor and also the Kari Voutilainen Vingt-8. Like all other Journe watches the movement bridges and base plate are in rose gold. And the case is available in 40 or 42 mm diameter, in either rose gold or platinum. The retail prices for the 40 mm versions are approximately CHF85,800 in rose gold version and CHF91,800 for the platinum version. I reckon this is some time from being sold commercially, and working reliably, but it is a notable addition to the ever growing category of chronometers (in the truest sense of the word). – SJX