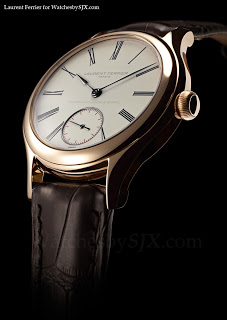 Recently Laurent Ferrier announced once of its tourbillons achieved record results at the Besançon Observatory. That watch was one of the new Laurent Ferrier Galet Classic Tourbillons with the beautifully toned ivory grand feu dial.

The Roman numerals are black, as are the hands, which are actually blackened gold. And a nice detail is the white gold rim around the sub-seconds dial. Inside sits the superbly finished calibre with tourbillon and double hairspring created by La Fabrique du Temps.

This is the second dial variation for the Galet Classic Tourbillon announced this year, after the brushed, slate grey dial. 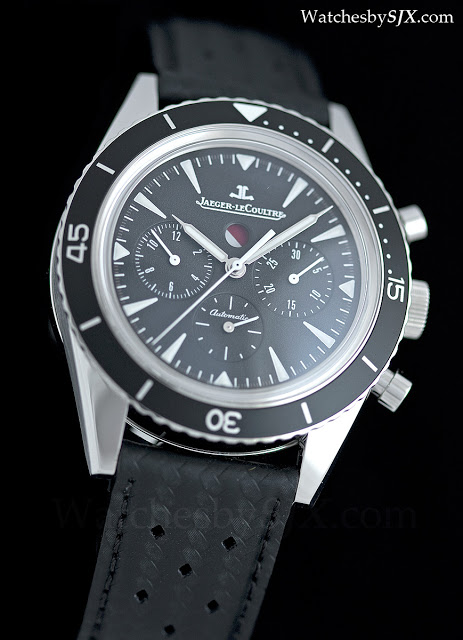 JLC has been on a winning streak with its remakes of vintage models, most notably with the 1931 Reverso. The pair of Deep Sea Alarms launched last year sold well, so earlier this year JLC announced the Deep Sea Vintage Chronograph. That was not exactly a remake but rather a new but vintage-looking model inspired by the Deep Sea Alarm. JLC just unveiled the second variation-on-the-theme, the Deep Sea Chronograph.

The model name has no “vintage” prefix so it looks more like a modern watch; the Luminova is clean white instead of faux aged. But the dial has the same matte, grained texture as its Vintage brothers, as well as the retro-style  “tropical” strap. Other differences from the Deep Sea Vintage chrono are the three chronograph counters (instead of two). But most unusual is the chronograph function indication in the window at 12 o’clock. Inspired by a similar display in the vintage Jaeger Chronoflight aviation clock, the window indicates the state of the chronograph mechanism. An all white display means the chronograph is not running, a red/white indicator means it is running, and an all red window means it has been stopped should be read before being reset. While novel the indicator is somewhat irrelevant since it is obvious when the chronograph is running due to the central seconds hand, something the Chronoflight clock didn’t have. Though I suppose the window is easier to read at a glance than the seconds hand while underwater. And the Chronoflight as a pilot’s tool, while this is ostensibly a diver’s watch. The movement is the cal. 758, a derivative of the cal. 750/751. And the case diameter is 42 mm, a tad larger than the 40.5 mm of the Deep Sea Vintage. Also, the crystal here is sapphire, unlike the Deep Sea Vintage which was acrylic. The list price is USD10,800.