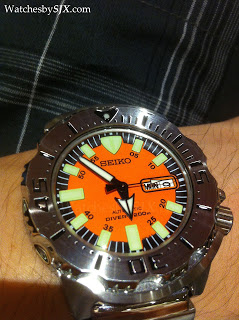 Inspired by my gallery of wristshots on Facebook, I’ve decided to start a series of “Watch of the Day” posts. Each post will cover the watch I was wearing the previous day. It will be a review of sorts, plus some interesting background on the watch. These will be posted regularly, but not daily. They will range across a variety of watches, across complications and price segments. I might even invite contributions from readers of this blog. For the inaugural WOTD, I’ve picked something inordinately affordable, the Seiko Monster. How it acquired this moniker is lost to the internet, but this Seiko is known as the Monster. There are many variants of the Monster, including valuable limited editions in bright colours made for the Thai market. But the most common and affordable Monsters are the Black Monster (ref. SKX779) and Orange Monster (SKX781), with the prefix referring to the dial colour. These two are the no frills, entry level Monsters, selling for about $250, which is less than some watch straps.  But there are also Snow Monsters, Night Monsters and so on. There even exist Monster cousins that aren’t dive watches, like the Trek Monster. And yes, there are even Mini Monsters. If there is an iconic Seiko dive watch, the Monster definitely is contender for that title. In fact, there is talk of fake Monsters, which is quite unusual for such an affordable watch and a sign of its success. The design is unusual, but distinctive. In fact, it verges on ugly, but manages to appeal in a sharp-edged and aggressive kind of way. The scalloped bezel and sharp hands add to that impressive. The case is not very large at 41.5 mm, and it wears a bit smaller. A hefty and solid, but simply constructed bracelet is an option. Inside sits the 7S26 movement widely used in the Seiko 5 models. It isn’t a pretty movement but it runs like a champ though timekeeping is so-so straight out of the box. The 7S26 has the Magic Lever bidirectional winding Seiko invented – which has since been appropriated by several Richemont brands – but in my experience it isn’t particularly efficient at winding. It can’t be hand-wound either. That’s why Seiko recommends swinging the watch from side to side to start it from a stop. Many Monster owners “mod” their watches, that is modify the timepiece. In fact, not just the Monster but all other Seiko sports watches. The low price of the Monster makes it possible to do this without too much risk. As a result, a whole ecosystem of Seiko aftermarket parts, as well as modders who can do many things including beadblast or PVD coat a case, has emerged. Many of them can be found on the Seiko & Citizen Watch Forum. The variety of mods is mindboggling, limited only by the imagination of the owner. Turning a Seiko into something that resembles a vintage military watch is probably the most popular mod. My Monster has a very basic mod. I have a pair of them, the Black and Orange Monsters, and I swapped the chapter rings to give each one a two-colour dial. I prefer this look over the original, it has more contrast and is thus more striking. Typically I prefer to leave watches as original as possible, but this mod is easily reversible since the chapter rings are secured by pins behind the dial. And the Monster is low cost and easily available. Another common aftermarket add-on for the Monster is a steel mesh bracelet. I have one on the other Monster, so perhaps that will be another WOTD in the future. – SJX