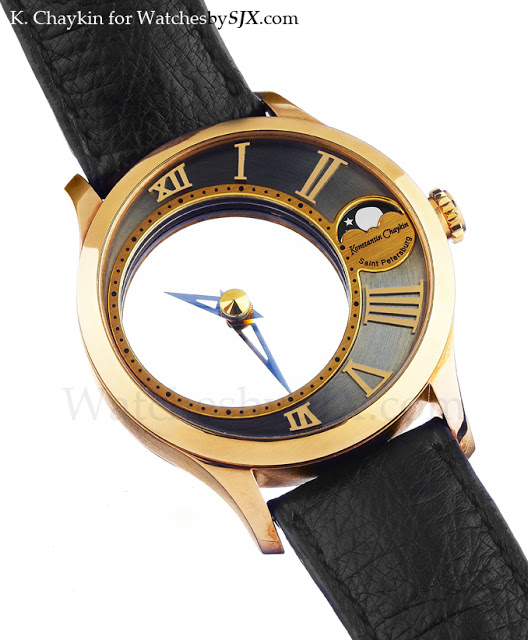 At Basel Russian watchmaker Konstantin Chaykin will present his Mystery wristwatch. Originally developed by Jean Eugène Robert-Houdin but made most famous by Cartier with its Mystery clocks, the Mystery watch is essentially two hands floating in the middle of an open space, giving the impression the hands are floating.   ﻿﻿ ﻿

Mr Chaykin doesn’t reveal the workings of this mechanism in the press release but it’s surely the tried and tested method of using a pair of sapphire discs, one for each of the hands. The discs have teeth on their periphery and are driven by gears.

As the photo below reveals, the movement is squeezed into the space between the case and the transparent dial, like the 19th century pocket watches of Armand Schwob.

The Mystery attempts to look elegant but somehow fails. It doesn’t look distinctive either, unlike the Lunokhod, which is massive and quite Russian looking. That is certainly Mr Chaykin’s most recognisable watch.  Mr Chaykin will also present a facelifted version of the Lunokhod moon phase, the Lunokhod Prime at Basel. This is cased in gold, unlike its Damascus steel brother. Other differences are the sapphire dial, retrograde minutes and large pearl that is the spherical moon phase.

﻿The Antiquorum sale in Hong Kong on 26 February will feature some interesting timepieces from Jaeger-LeCoultre and IWC. The JLCs are a three piece set of the Gyrotourbillon 1, Reverso Gyrotourbillon 2 and Reverso a Triptyque, lots 178-180 respectively, known as the “Hybris Mecanique” according to Antiquorum (or perhaps they confused it with the Hybris Mecanica grandes sonnerie set).  The Gyrotourbillon is of course the landmark high complication for JLC and one that has done quite well at auction. Estimate for the Gyro 1 is USD250,000-300,000, Gyro 2 is USD180,000-220,000 and USD300,000-400,000 for the Triptyque. They were sold in 2009 as a three piece set, from a limtied series of 20 sets in white gold with black dials. This is the first set to be offered for sale at auction, though not the first set to be broken up or sold on the secondary market. And there is a set available at an authorised dealer in Asia as well. Interestingly while I was in the JLC manufacture recently I saw watchmakers assembling a Triptyque in this configuration, which must be part of the last of the 20 sets to be delivered.

﻿ Most of the 125 watches in this series were in yellow gold with silver dial (take a close look at one of those). This one offered for sale is unusual in that it has a platinum case with dark blue dial and a rhodium-finished movement. There was one other variant with Pt case and blue dial, but it had a gold-plated movement as typical of most of the others.  – SJX

Results for JLC super complications at auction and an unsold IWC