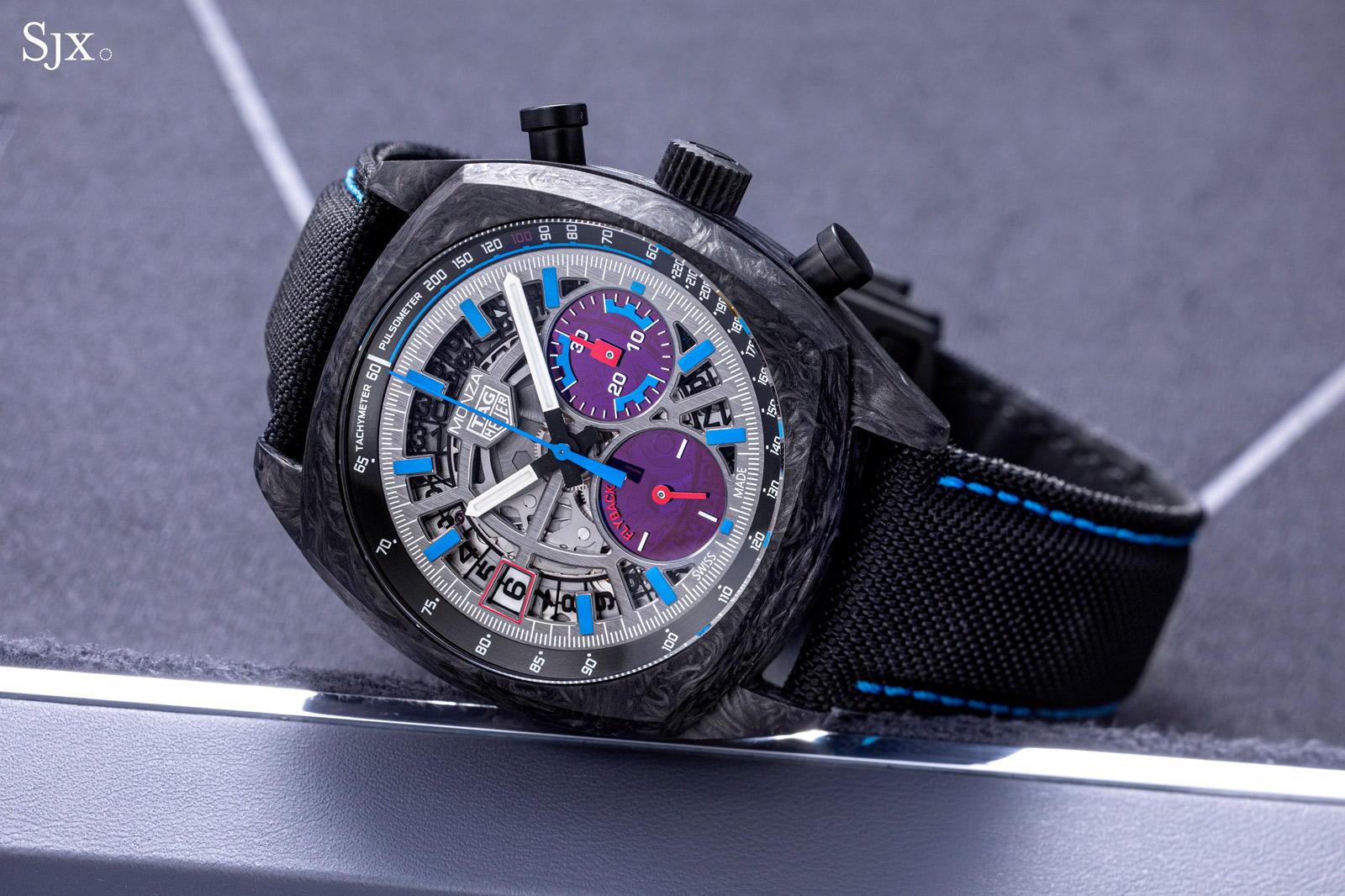 LVMH Watch Week, the year’s first significant watch fair, just kicked off in Singapore. In some ways a warmup for Watches & Wonders in March – the biggest watch fair of the year – the LVMH Watch Week is where the watchmakers owned by the French group show off their wares.

Amongst them is TAG Heuer, which has revived one of its less-known racing chronographs from the 1970s but in a thoroughly modern style. The Monza Flyback Chronometer is a flyback chronograph featuring an open-worked dial and a 42 mm carbon composite case. 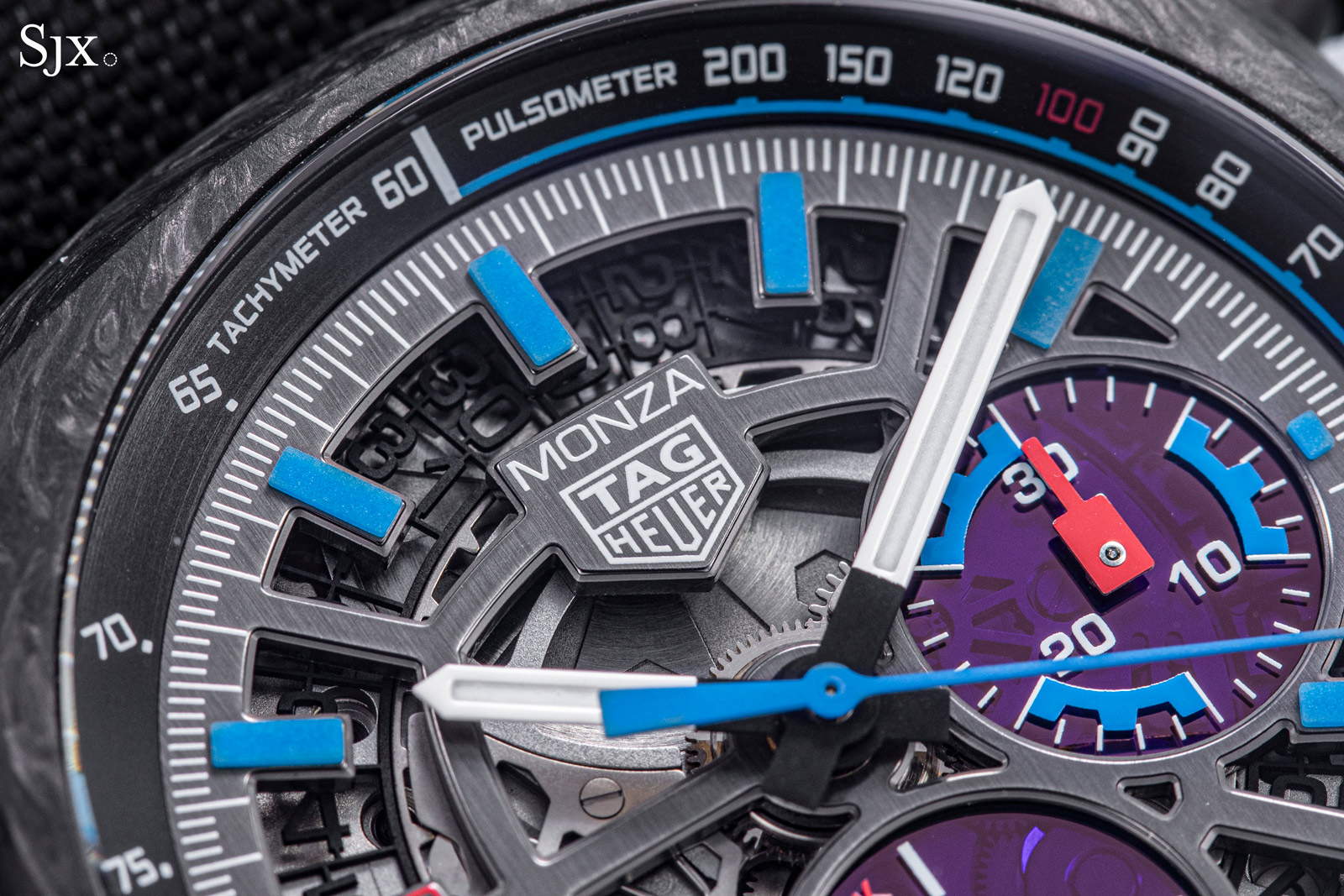 Perhaps the most aggressively modern chronograph in TAG Heuer’s current line-up, the new Monza liberally reinterprets the 1970s original. While the vintage Monza is not famous as the Carrera or Monaco, it is interesting in several respects, including the fact that it was the first serially-produced Heuer to sport a black-coated case.

The carbon case and open-worked, asymmetrical dial show another face of TAG Heuer, but one that still fits with its motorsports-chronograph heritage. Certainly a TAG Heuer that is different, the Monza has clearly been conceived to cater to contemporary tastes, which is a good thing given that TAG Heuer already has an ample offering of faithful vintage remakes. 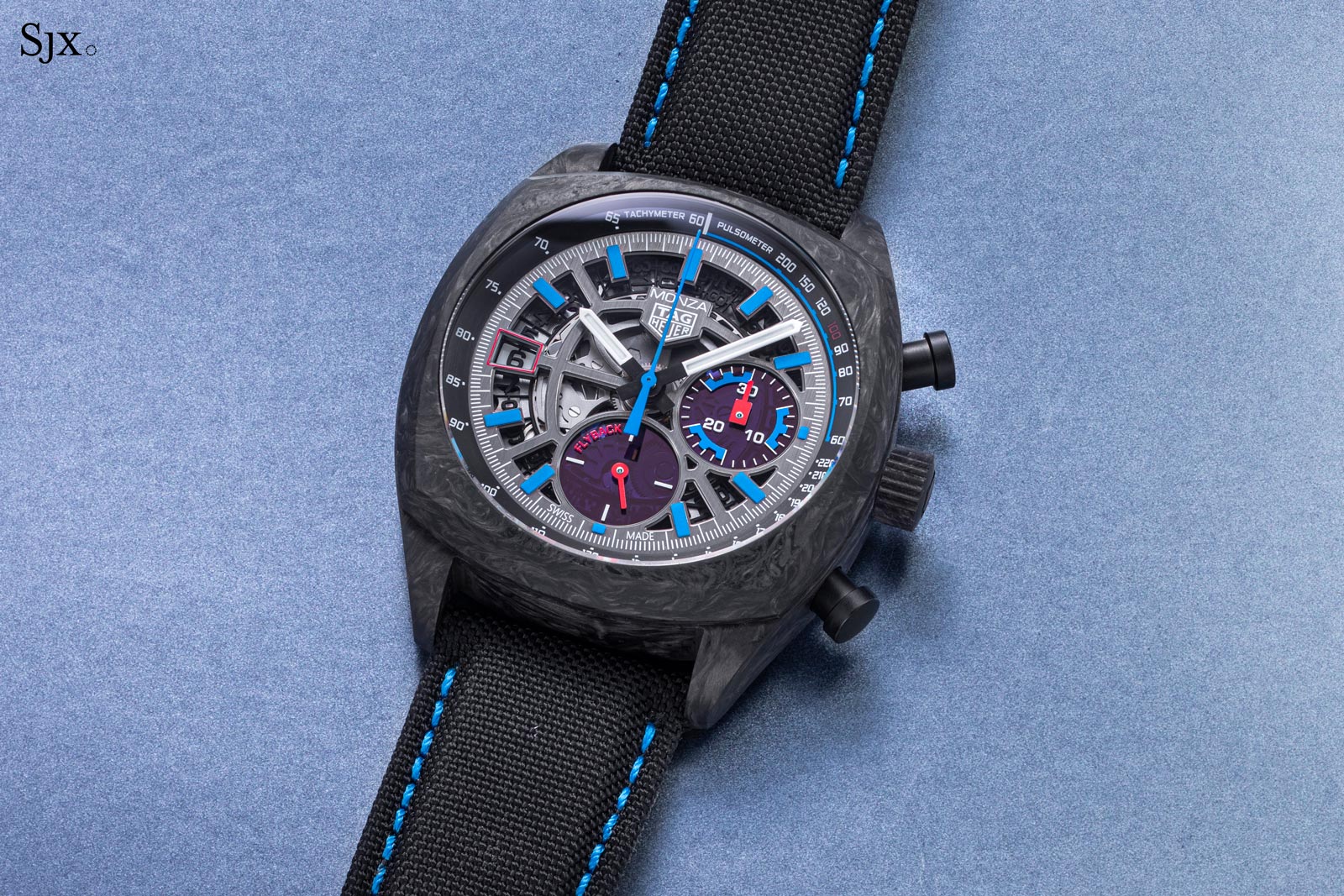 But the new Monza comes with a caveat, a steep price. Coming in at US$13,500, the Monza costs double the Autavia Flyback Chronograph that has the same movement but a no-frills steel case. Even considering the carbon composite case and fancy dial, the price premium is difficult to rationalise.

A racing classic for the modern-day

Like most TAG Heuer chronographs, the Monza Flyback Chronometer reflects the brand’s long history in motor racing. First released in 1976, the Monza was designed by Jack Heuer, great-grandson of the brand’s founder, to celebrate Ferrari’s twin Formula One victories in 1975, when the team won both the constructor’s and driver’s championships. Austrian driver Niki Lauda clinched the title after placing third at the Italian Grand Prix, which took place at none other than the Monza Circuit.

Since then, the Monza has come and gone, appearing in various guises over the decades. In the early 2000s, the brand debuted several versions of the Monza in a compact 39 mm steel case. And in 2016, the Monza was redesigned as a limited edition for the model’s 40th anniversary. All 21st century Monza models, however, more or less hewed to the styling of the original. 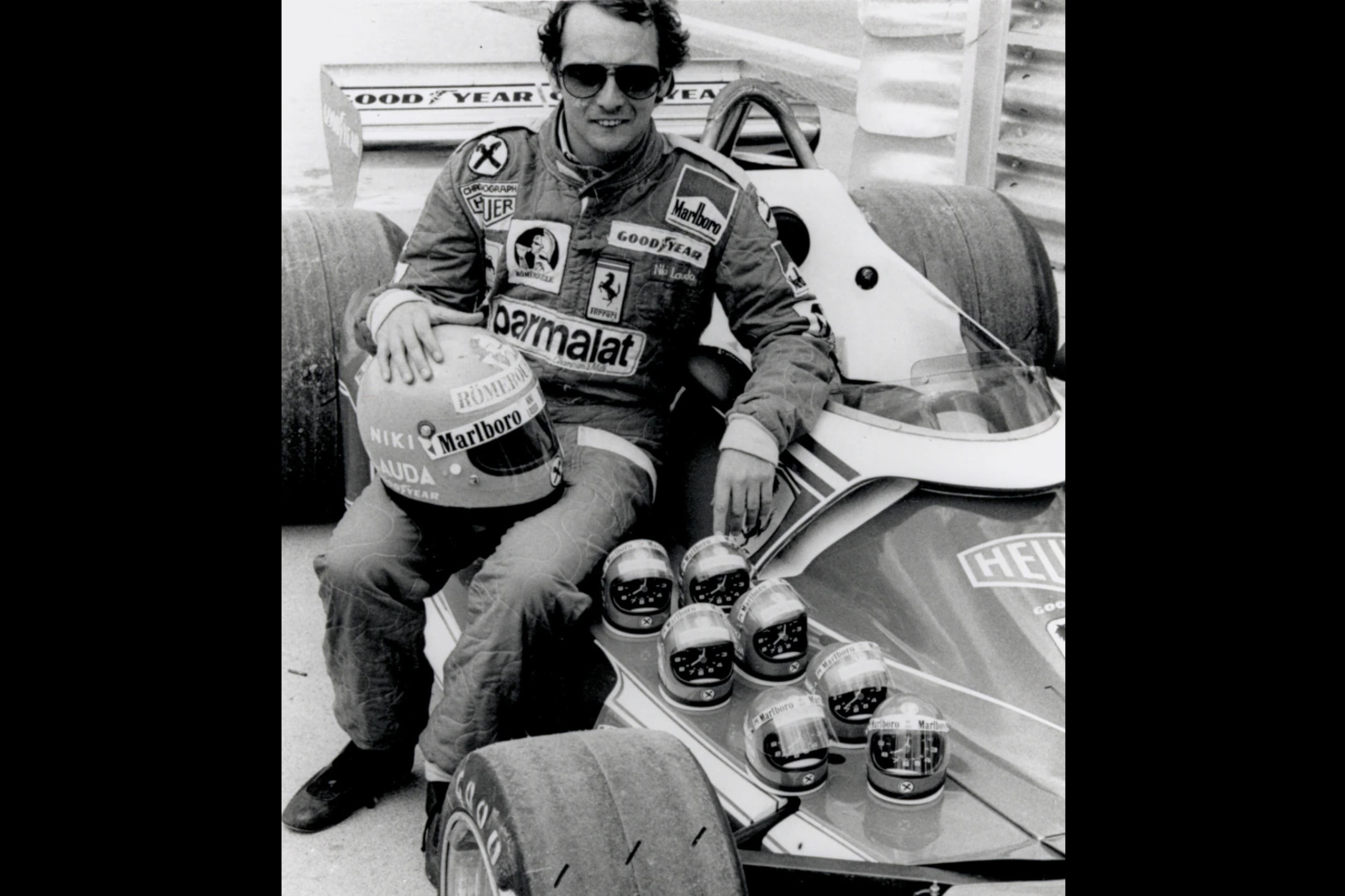 The new Monza is refreshing break from its predecessors. It retains the cushion-shaped outline of past models, but it’s now 42 mm of carbon composite. Carbon composite is commonplace now, especially for sports chronogaphs, but it still has appeal for its distinctive look and feel. Not only does it result in a lightweight case that is comfortable on the wrist, but the marbled composite material evokes the monocoque cells of Formula 1 cars that protect the driver. 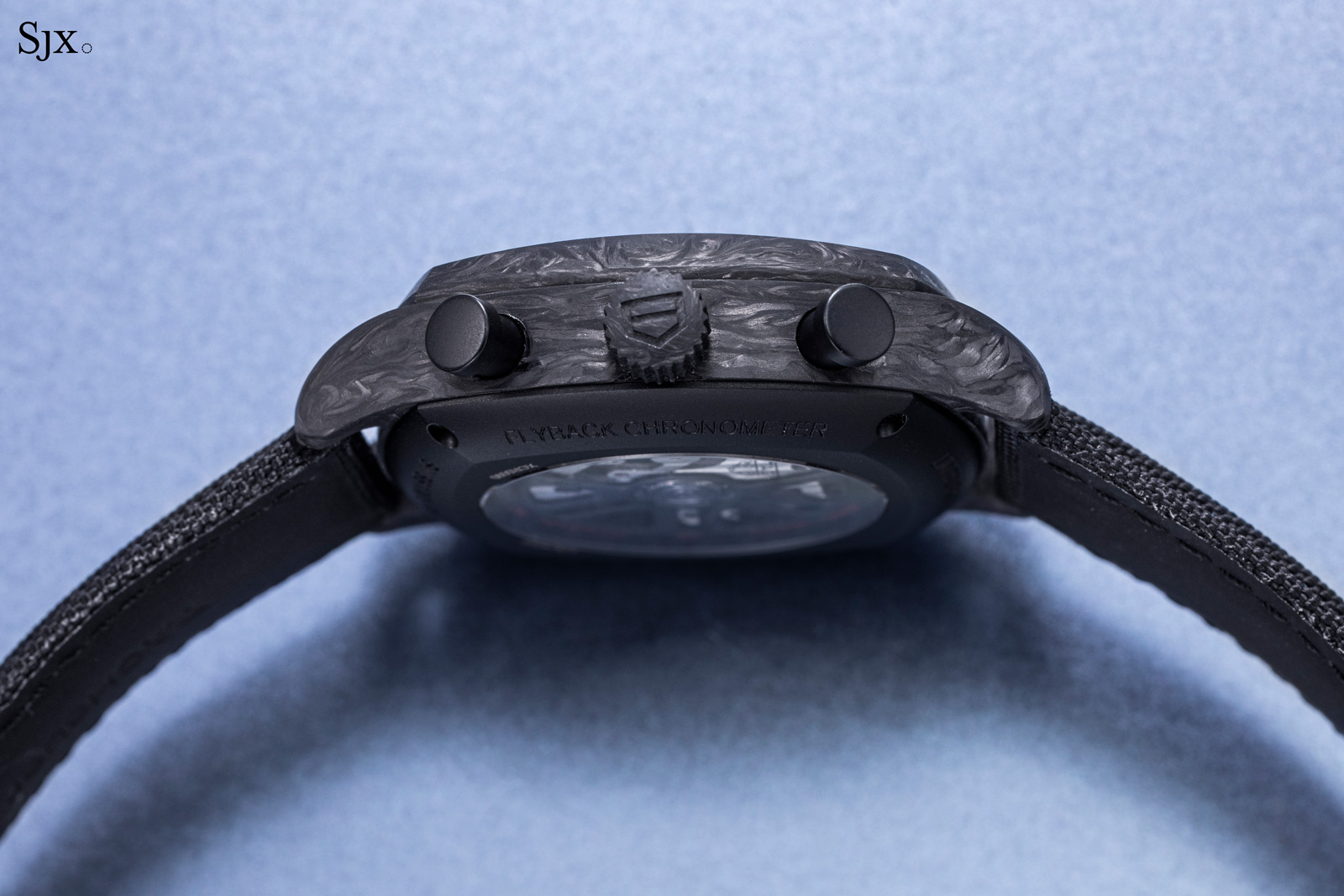 Interestingly, the composite case is constructed of two parts with the bezel and case middle being separate, resulting in a distinct border between the two. Because carbon composite cases are often created in a mould, a one-piece construction is more cost efficient and thus more common.

Despite the modern stlying, the new Monza does have hark back to the vintage original with pump-style pushers that add a retro touch. 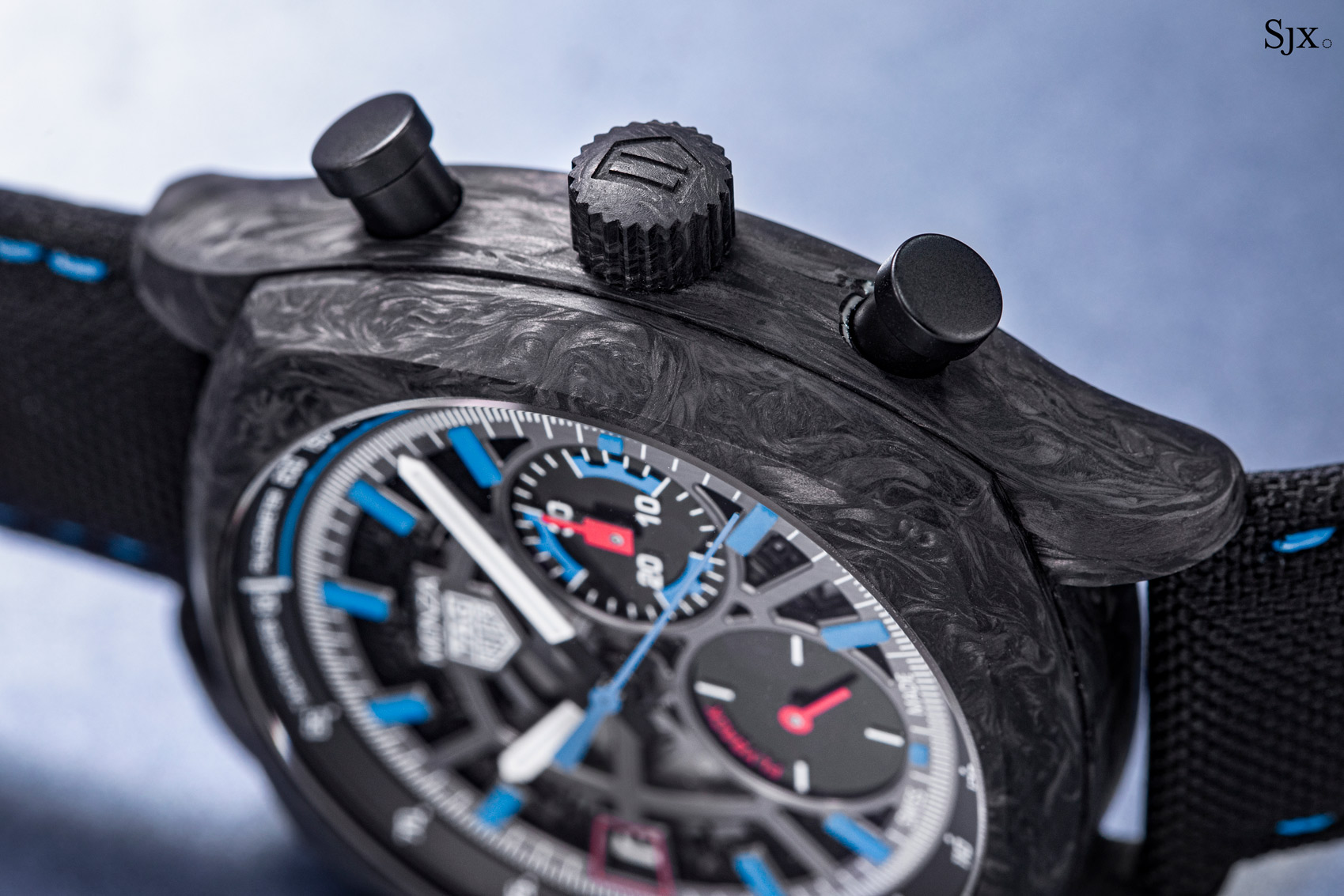 While the crown is carbon composite, the pushers are DLC-coated steel

The large case results in an expansive dial aperture that can accommodate the complex design. The dial is open-worked in the centre and ringed by both pulsometer and tachymeter scales. And it has “racing” accents of red and blue as expected of a motorsports-inspired chronograph. 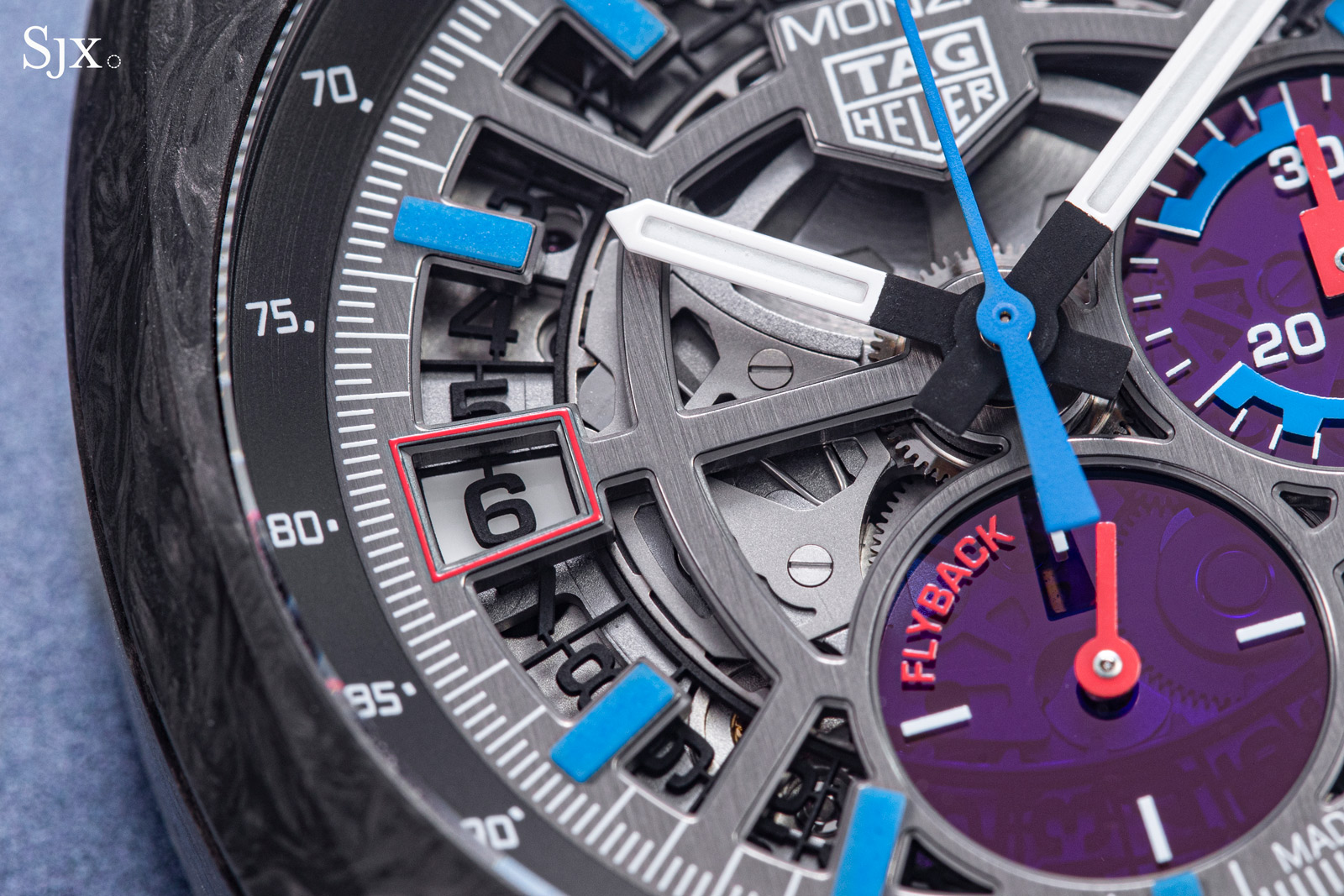 Two details stand out on the dial. One is the skeletonised date wheel that adds to the visual intricacy of the dial. The date wheel is black but set against a Super-Luminova background within the date window so that the date numeral is still visible in the dark. And the second are the tinted sapphire discs for the twin registers, one for the elapsed minutes and the other for the constant seconds. 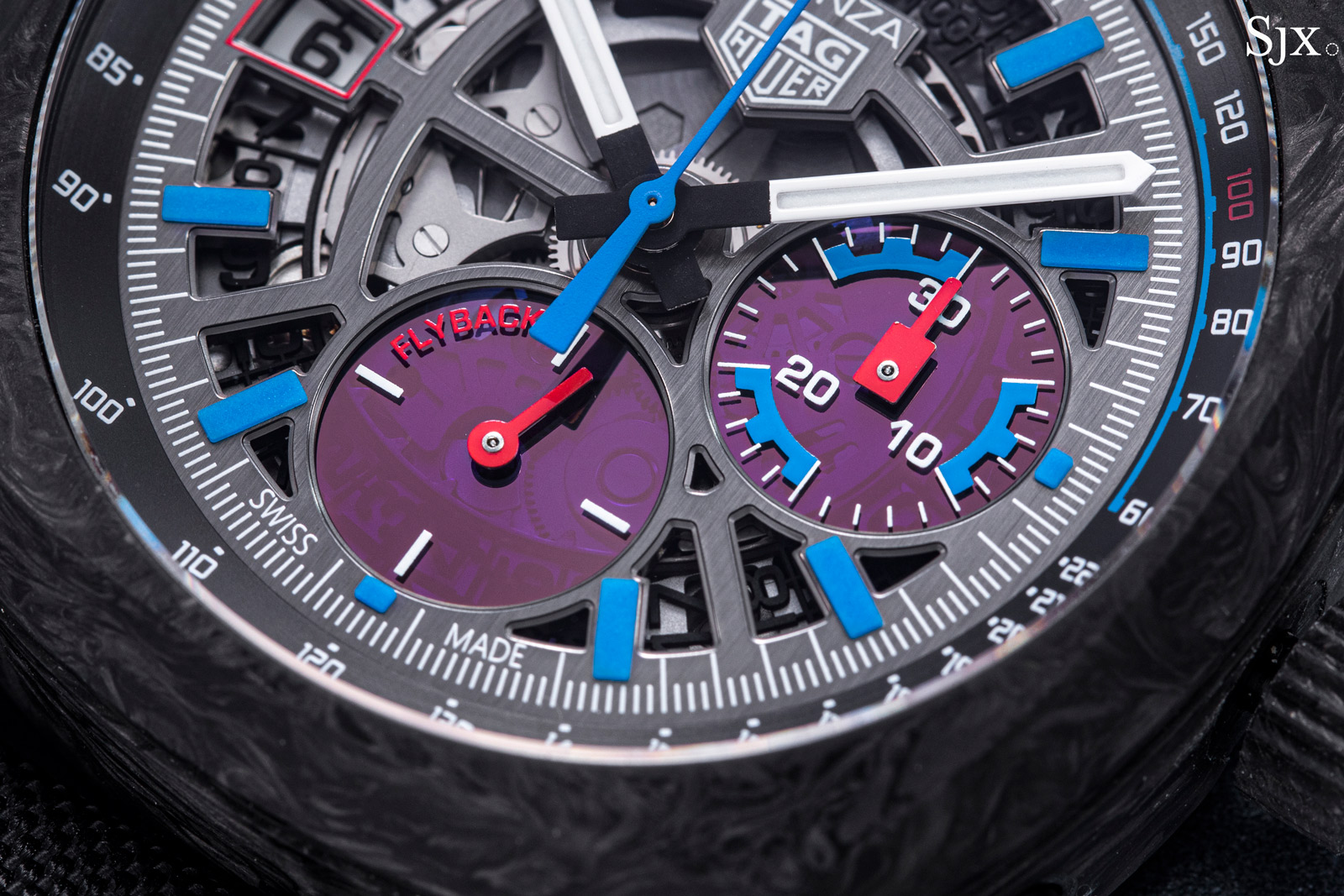 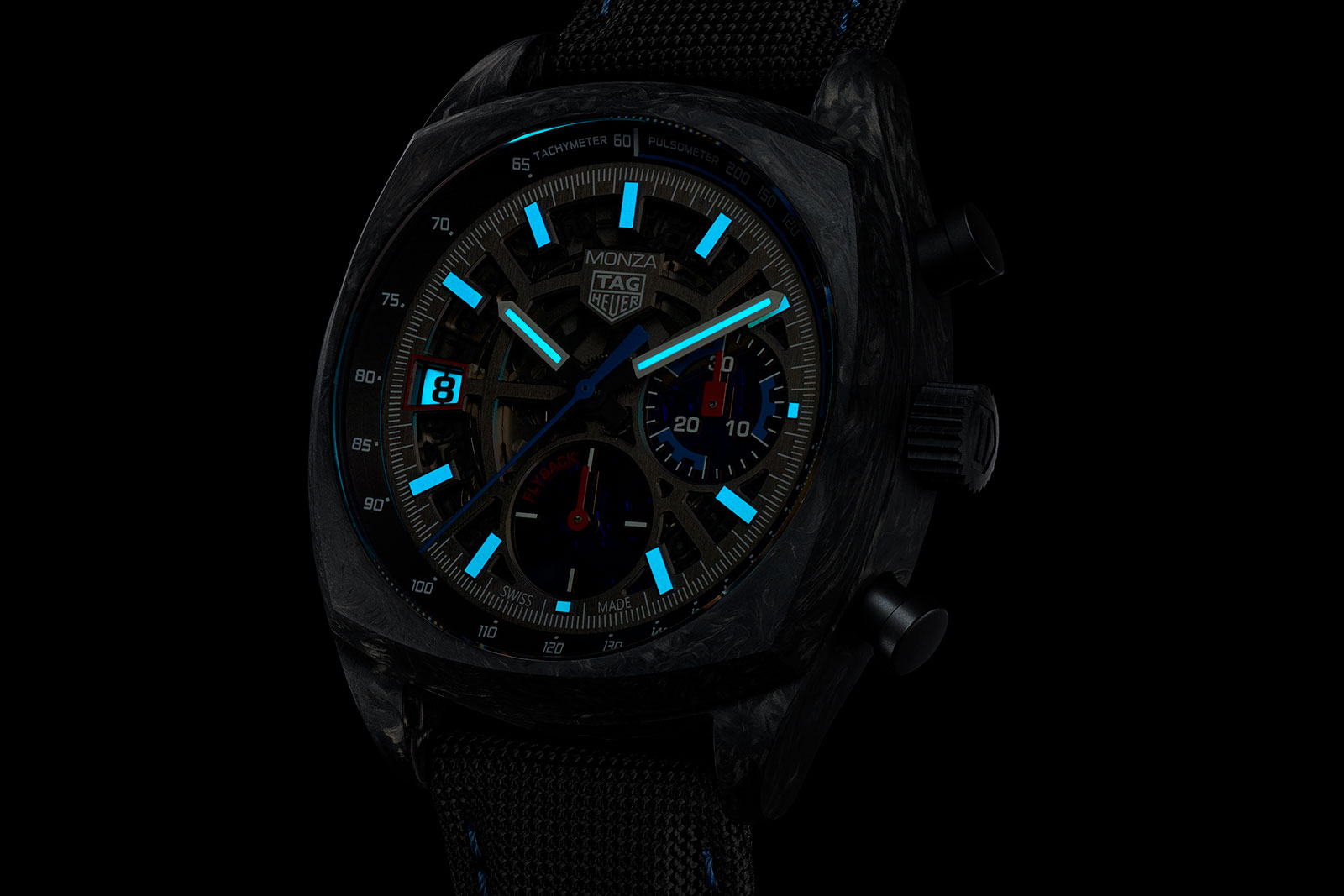 As with many of TAG Heuer’s mid- to high-end chronographs, the Monza is powered by the Heuer 02. But this is a slightly more upscale version of the movement that has both a flyback mechanism as well as COSC certification.

As expected of a competent, modern chronograph, the movement features both a column wheel and vertical clutch. And it has a substantial power reserve of 80 hours, so you’ll not need to worry about the watch running out of juice. 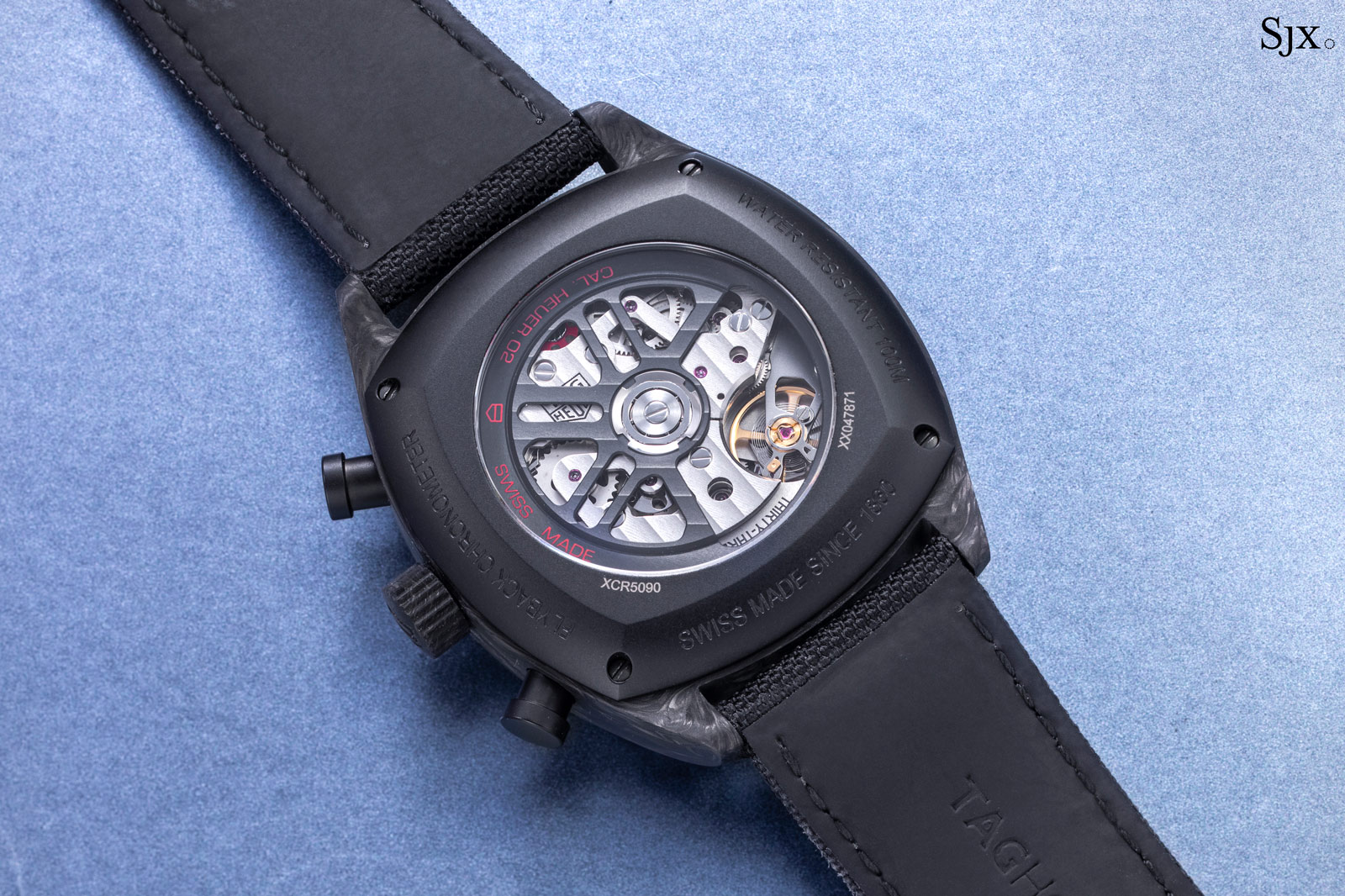 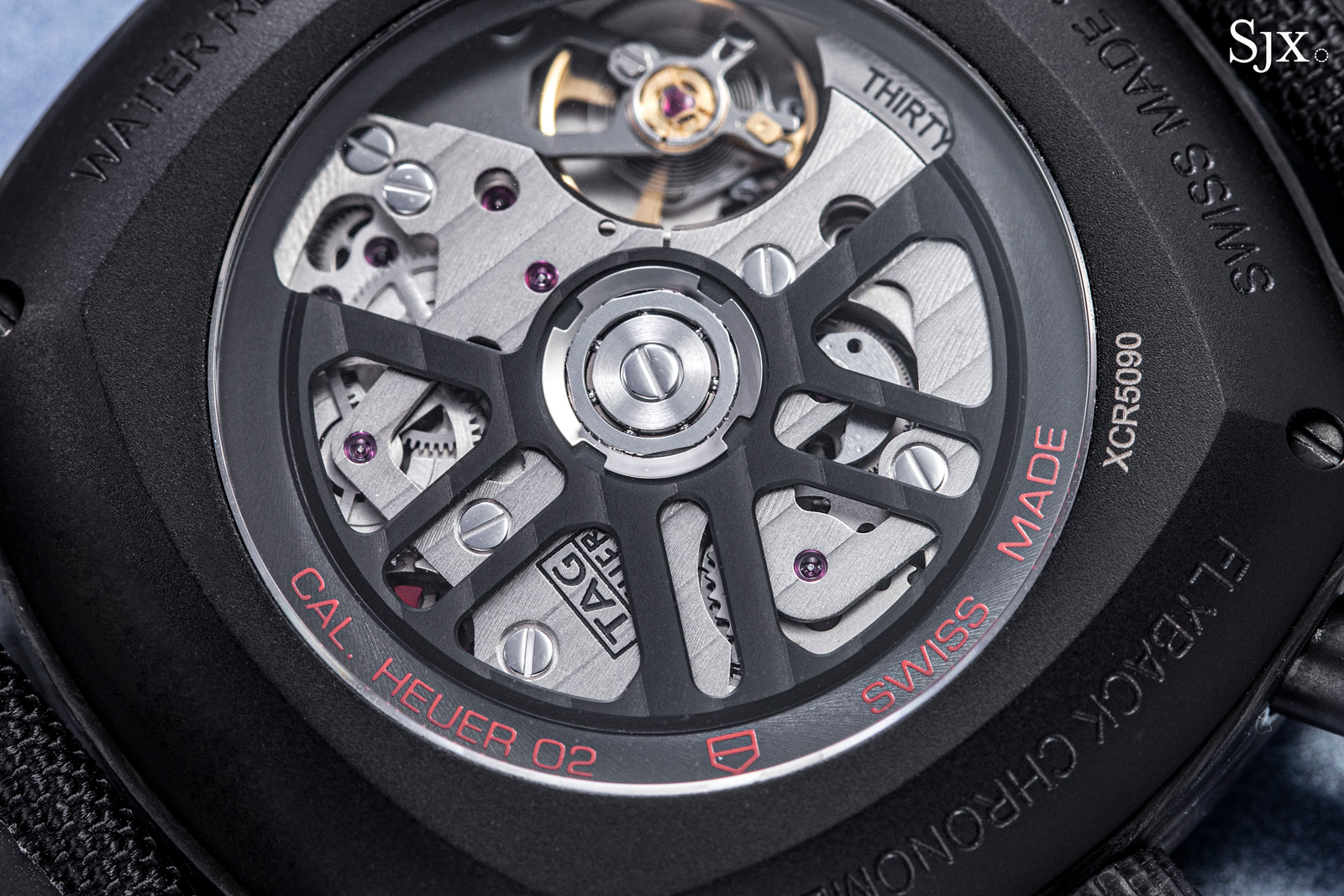 The Monza Flyback Chronometer will turn heads, if for no other reason than it looks very different from most of TAG Heuer’s other chronographs. The overall package is well executed, while the case material and in-house movement give it some technical credibility. It is, however, pricey. 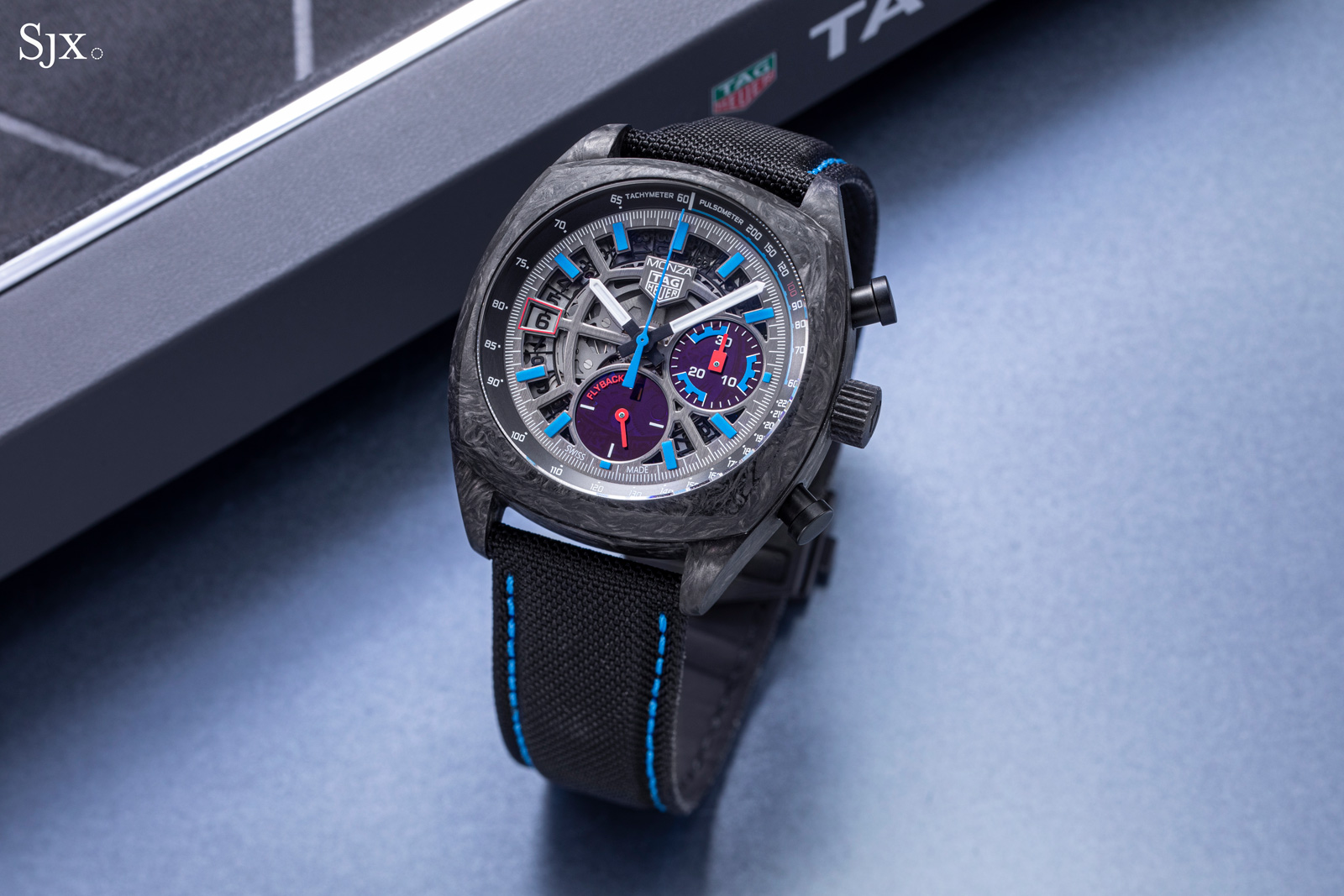