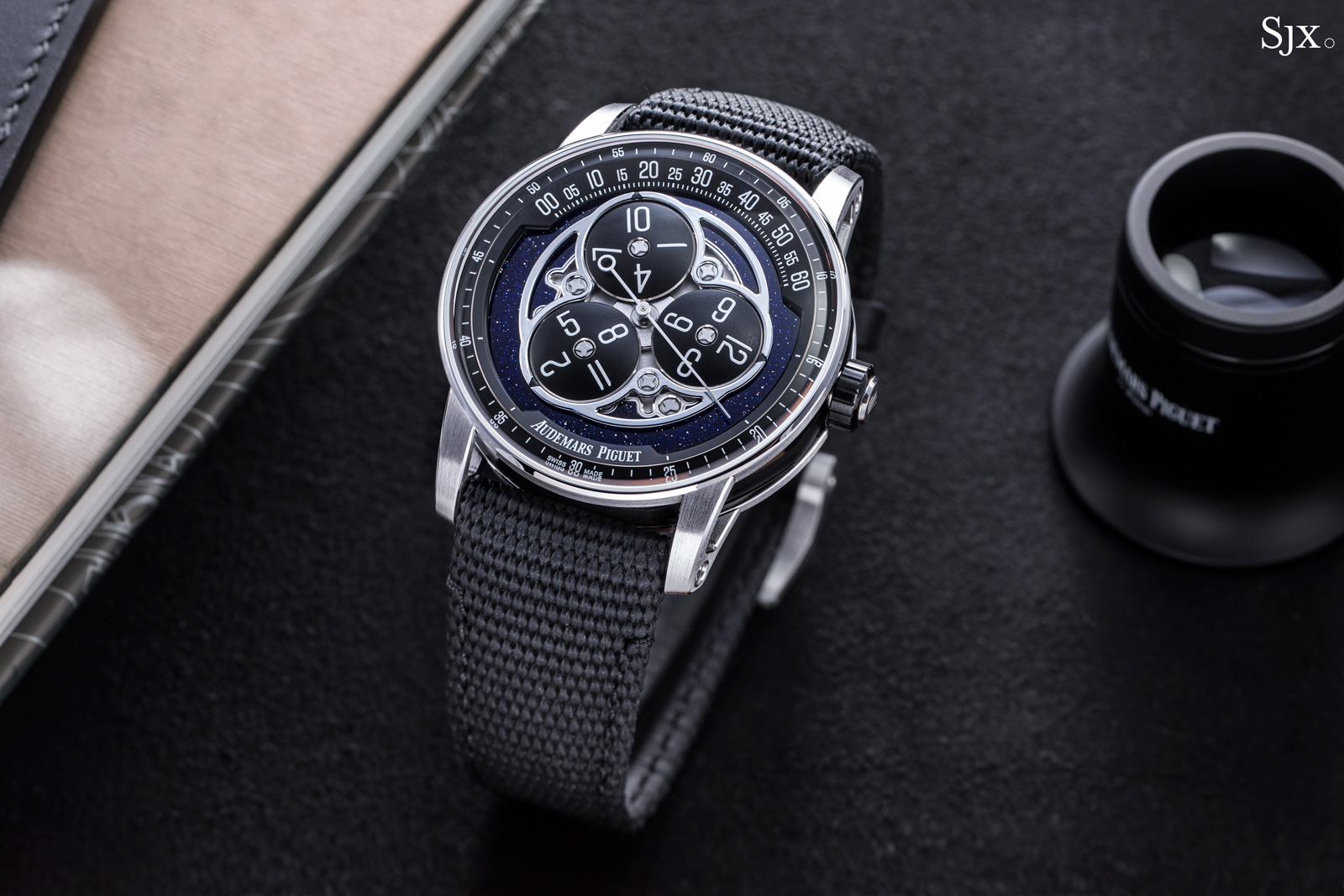 Retaining the familiar three-disc hour display, the new Starwheel is nonetheless an entirely different watch from the compact original. Powered by an in-house movement contained in the Code 11.59 case, the Starwheel has physical presence by virtue of its size, but also a surprising degree of refinement thanks to the excellent finishing of the dial and case. 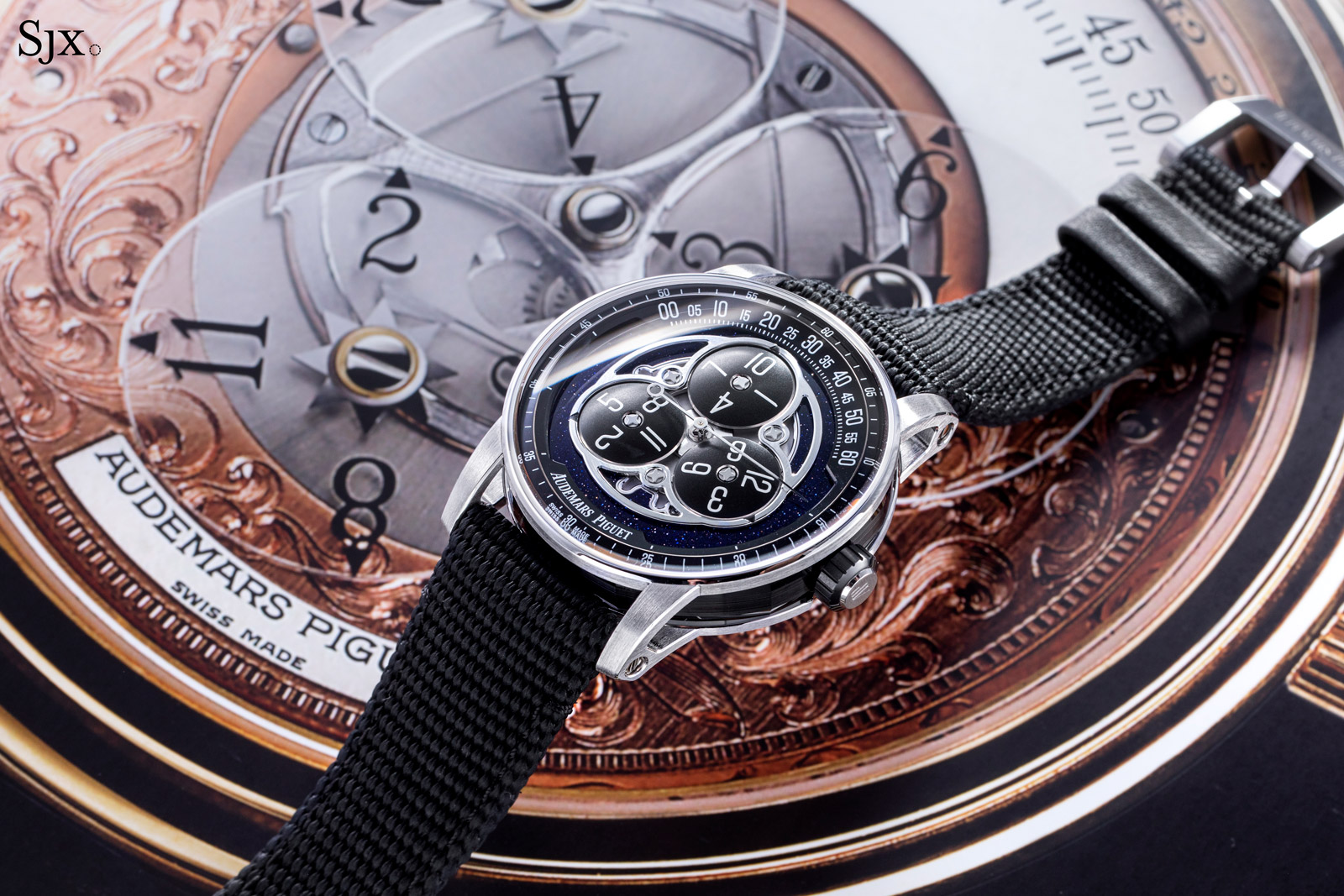 With a modern look defined by dark colours and instrument-like numerals, the Code 11.59 Starwheel looks pretty much the same as it does in photos – but it is far more appealing than expected. In the metal the watch has an impressive degree of visual detail, particularly the polished bevels on the dial components, and a reassuringly solid feel, all of which give it a great deal of tactile appeal. 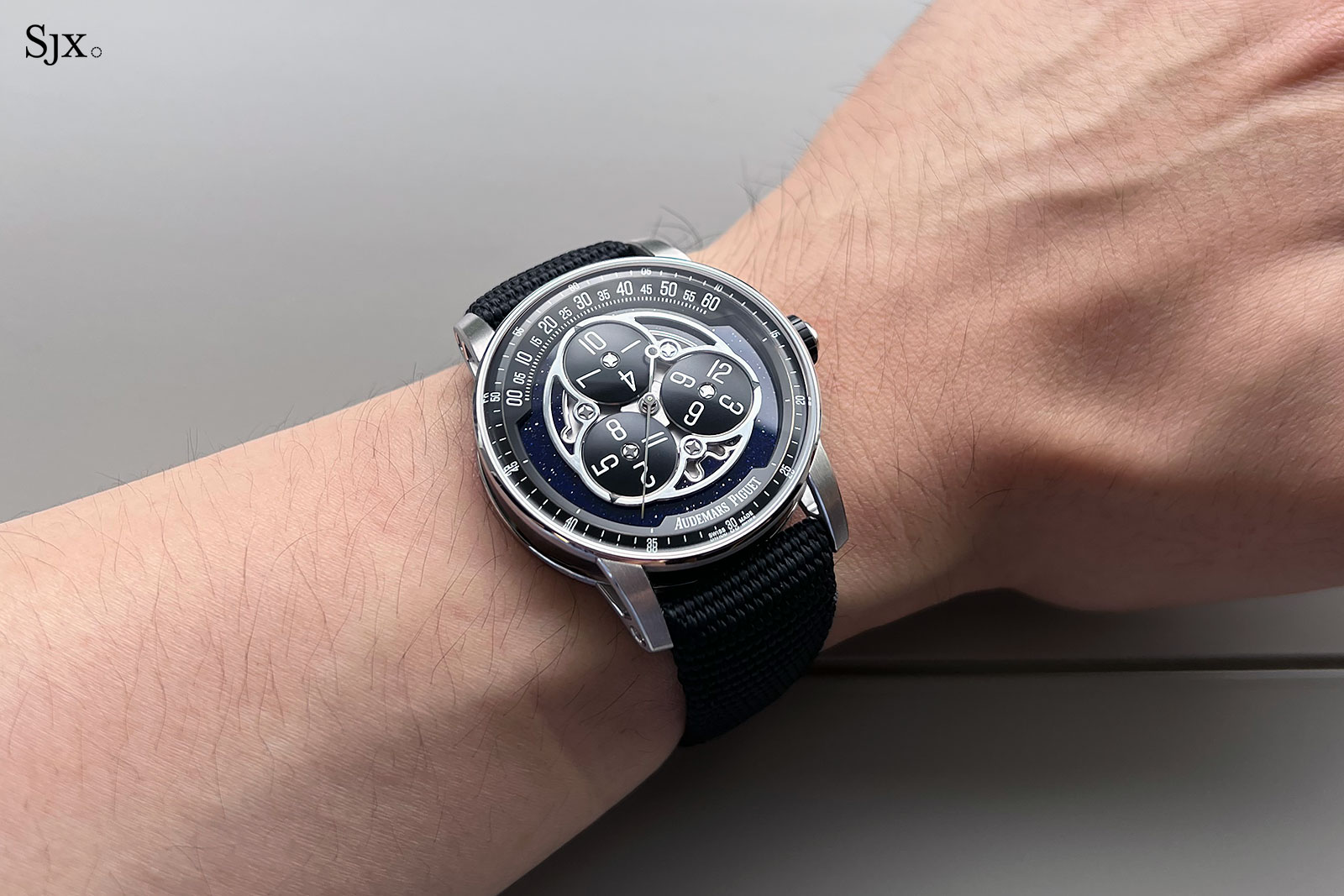 The refinement in terms of visual detail also translates into the movement, which is in-house both in terms of the base and module. Although it functions identically to the original Star Wheel, the Code 11.59 model has an improved display mechanism. Instead of the periodic rotation found in the original model, the discs rotate continually throughout the day, presumably thanks to wheels with finer and more numerous teeth. 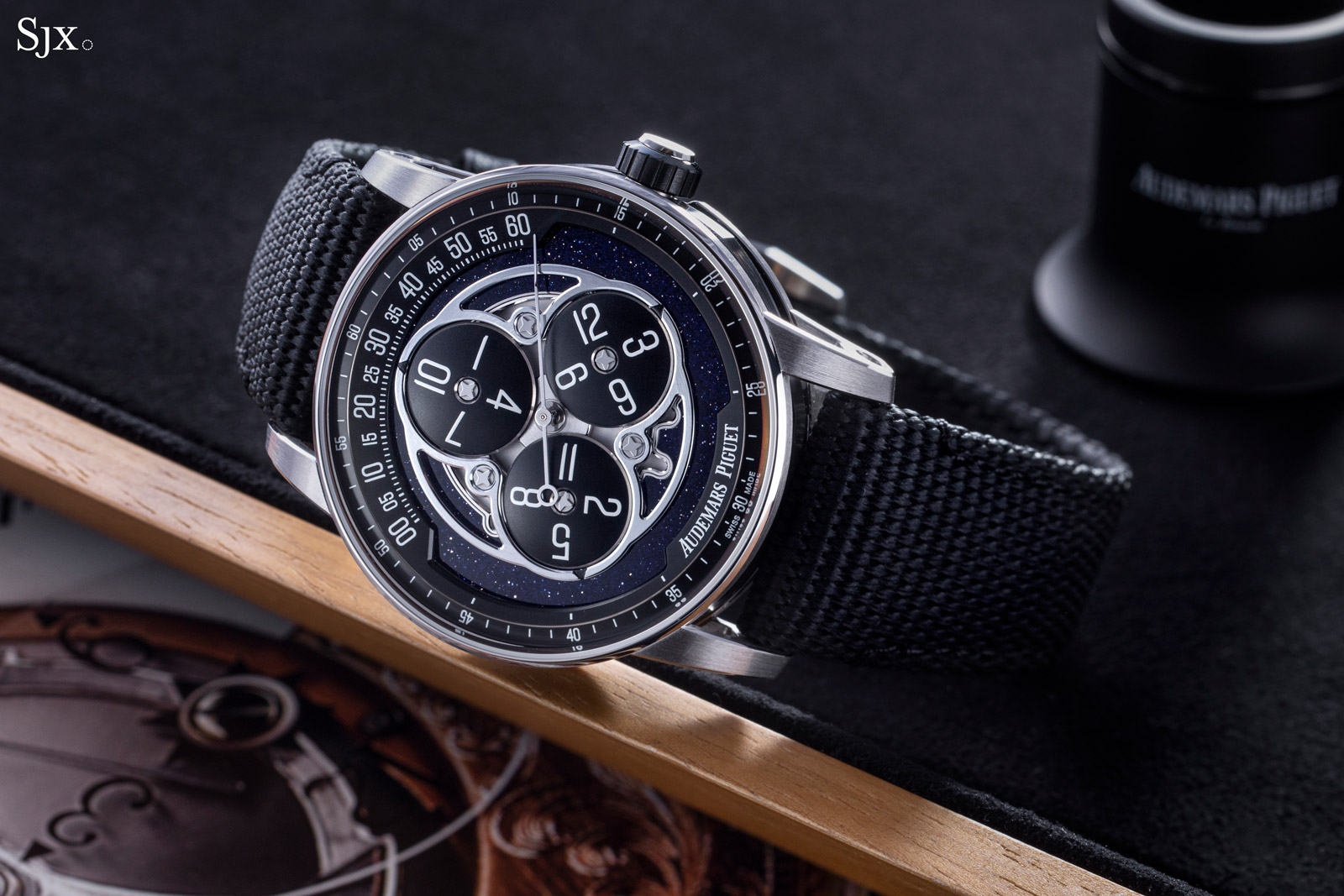 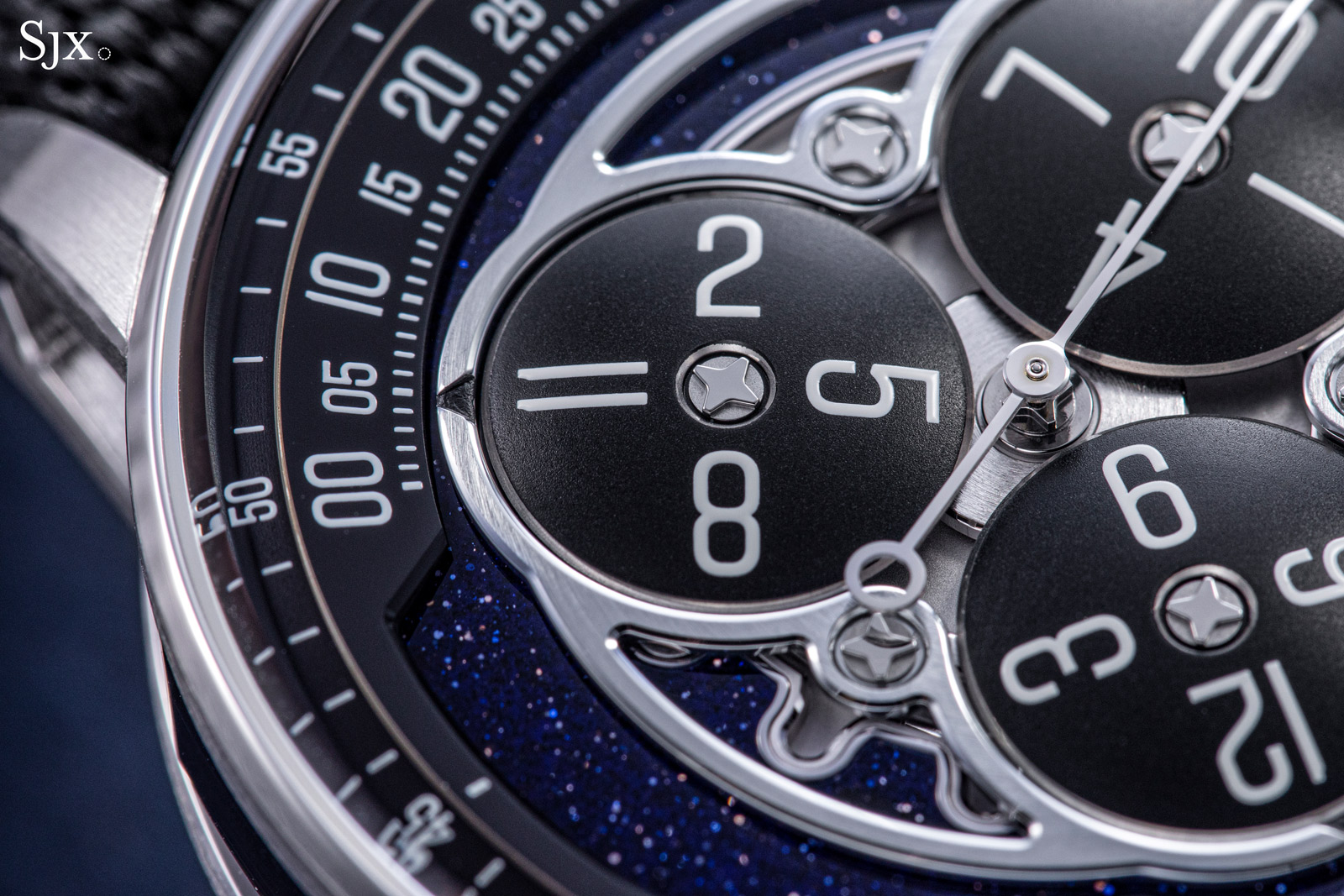 The movement also allows for a central seconds hand – the only element I would have left out. While the central seconds does serve to give the dial some sense of motion, it is unnecessary and looks out of place. At the same time, the case is a little large as expected for a Code 11.59, while the colours are too dark. But somehow the whole is greater than the sum of the parts and the Starwheel is an intrinsically appealing watch. 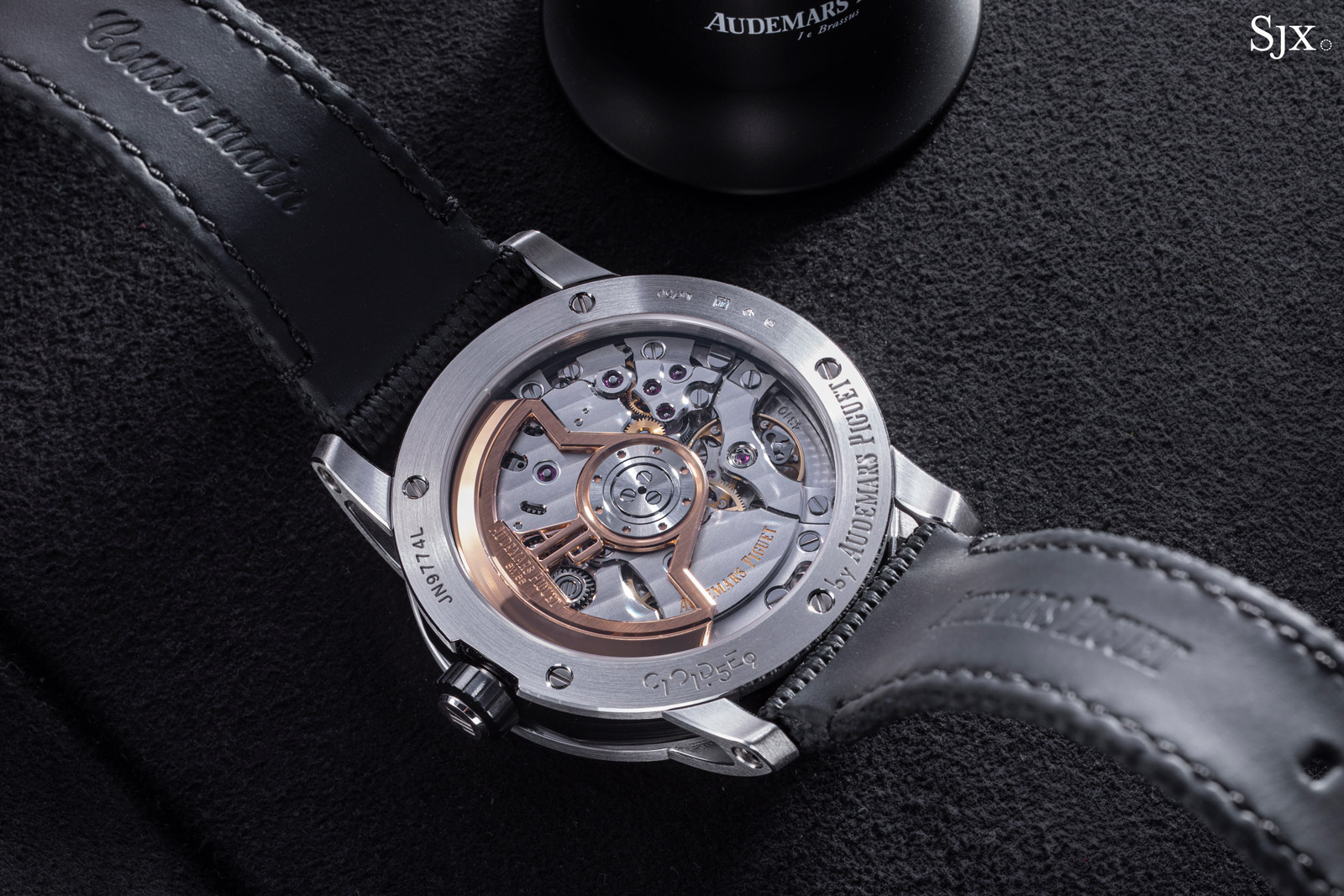 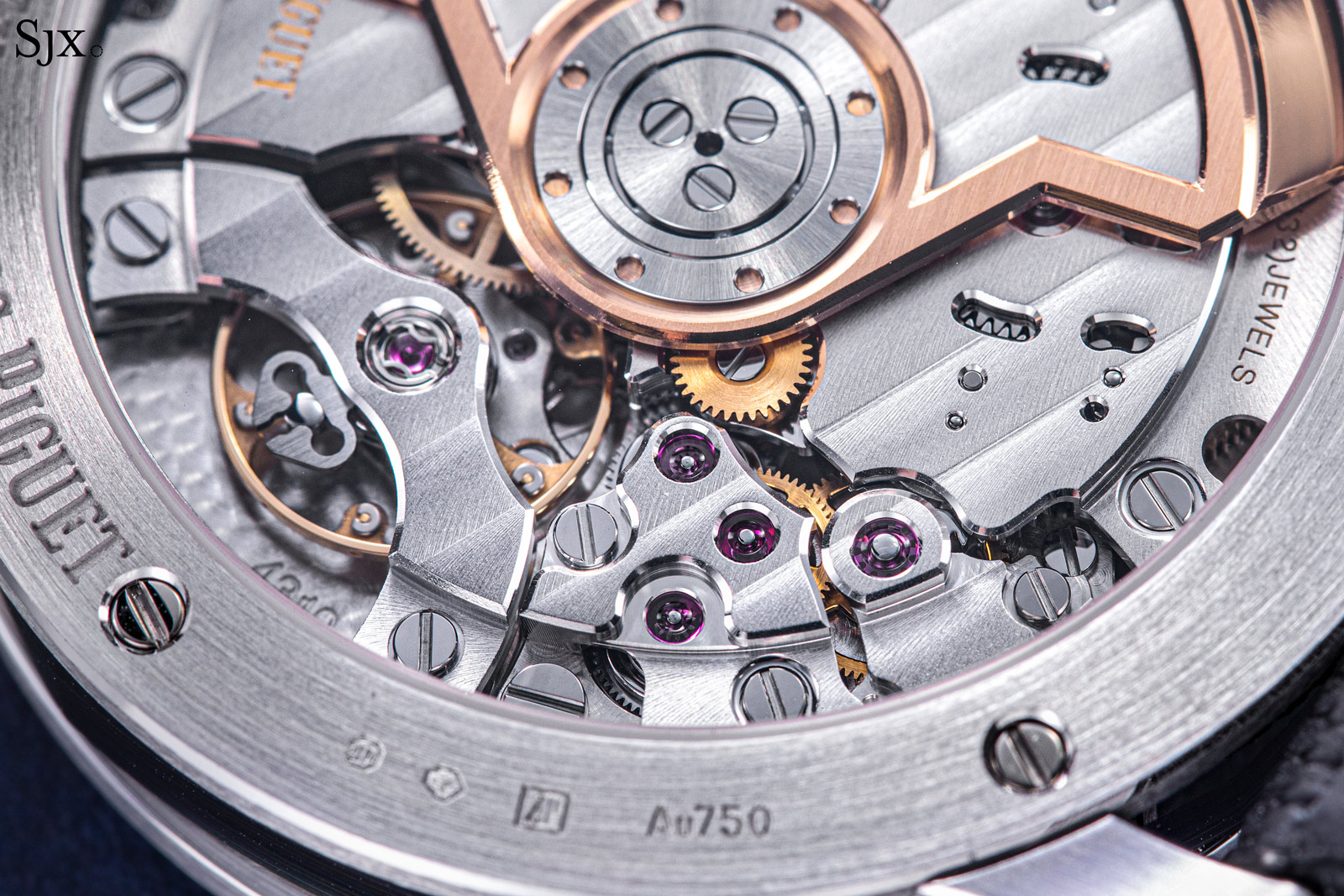 With its similar dimensions, the Starwheel feels like other Code 11.59 models. It isn’t huge, but it feels a little bigger than it should be. In fact, it feels bigger than it measures at 41 mm wide and just under 11 mm high. The size is no doubt intentional and probably meant to give it a slightly sporty feel (in order to appeal to a younger client presumably), which also explains the rubberised-fabric strap. I would have preferred a smaller and slimmer case, but this is still passable.

And because the construction remains the same, the Starwheel case has the same drawbacks as the other Code 11.59 models – there are too many nooks and crannies and narrow gaps in the case that trap dust. 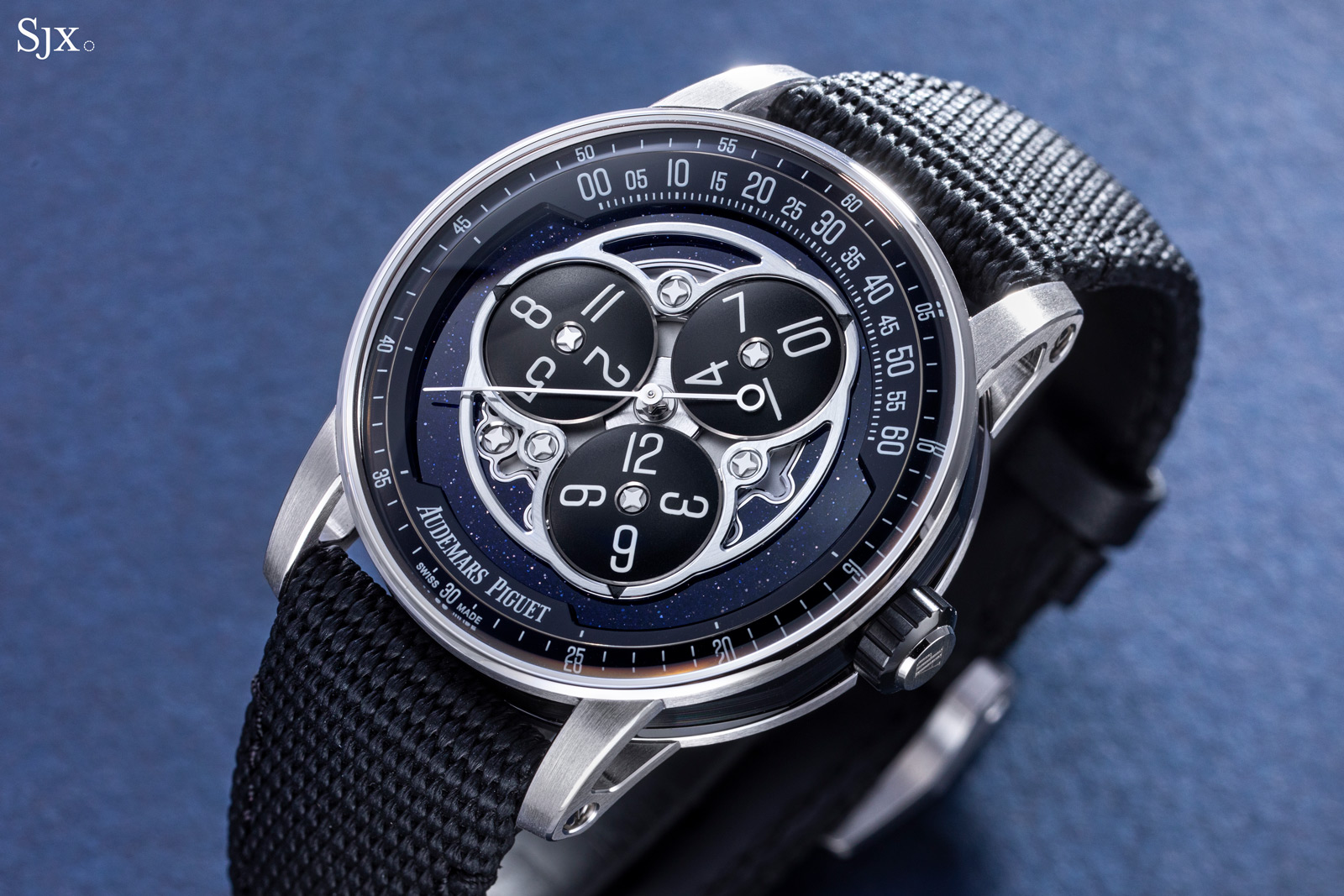 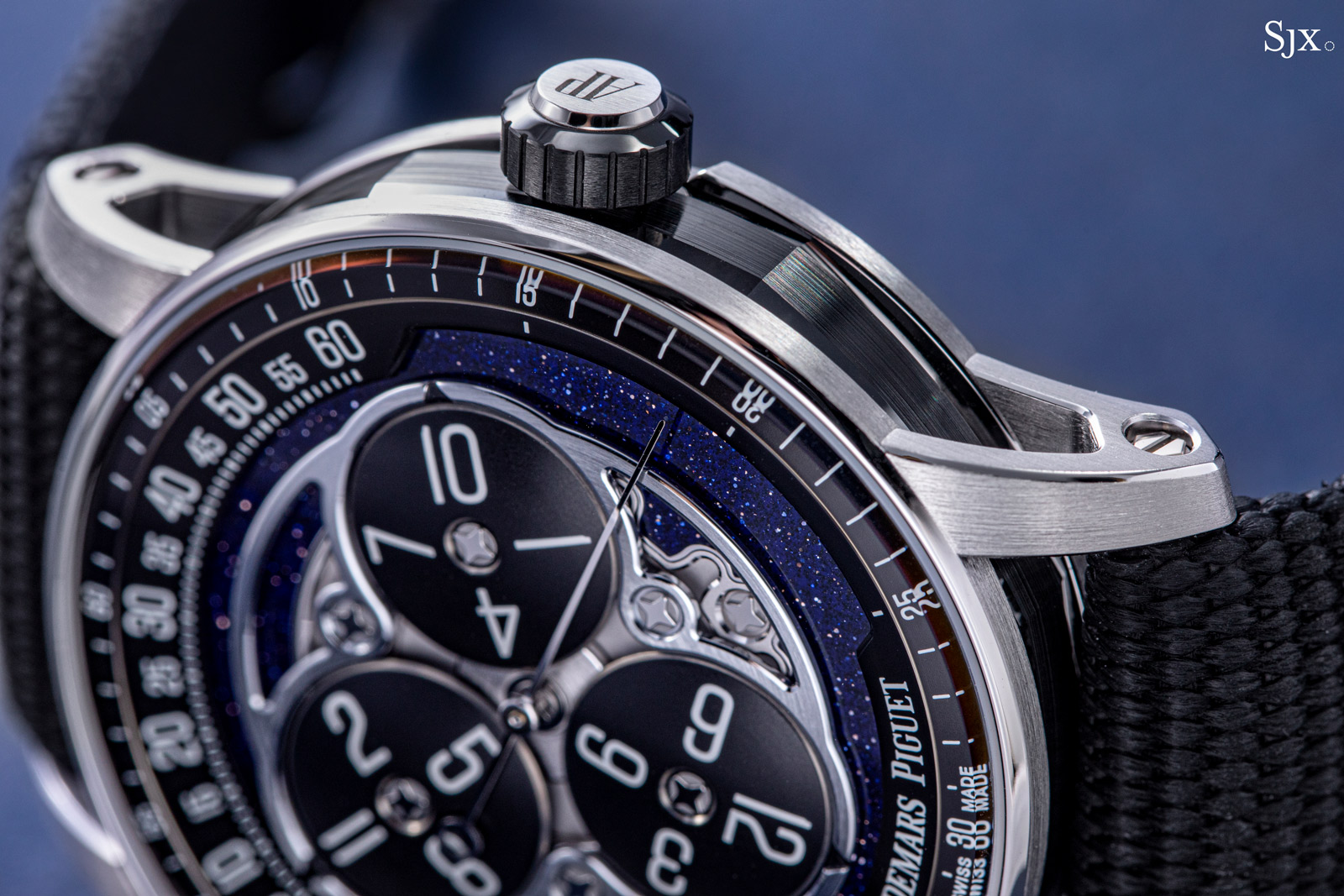 The case is essentially a sandwich with the bezel and back in white gold, and a black ceramic ring in between

As is typical for current AP watches, the case finishing is fine and detailed. Here the same high level of finishing is applied to two materials of vastly different hardness – 18k white gold and black ceramic – but the result is that both materials look almost as good. Finished with both matte brushing and mirror polishing, the black ceramic components are as good as it gets for the material.

The complex construction of the Code 11.59 case also lends itself well to finishing since there are lots of brushed surfaces outlined by contrasting polished bevels. This is especially so for the lugs that are open worked and also for the crown that is black ceramic. 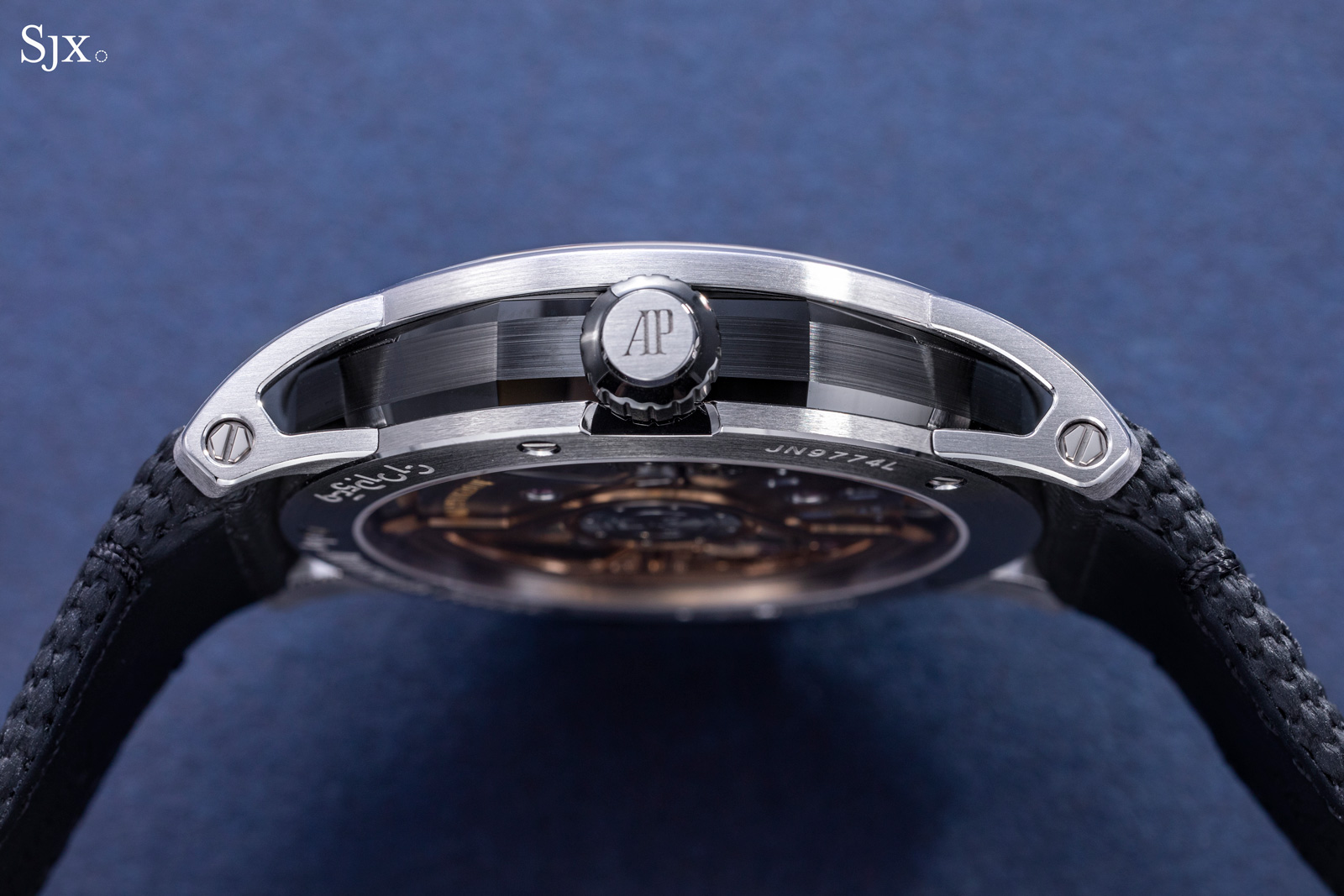 The black ceramic case middle is octagonal in shape, a reference to you-know-what The lugs are unusual in that they are integrated with the bezel but separate from the case back, so they sit a hair’s width away from the back

While the finishing of the case is impressive, I am indifferent to the twin-material combination. Personally I like the Code 11.59 in two-tone gold better (as found on the skeleton tourbillon). I expect more variants of the Starwheel to emerge eventually, so a two-tone, all-gold model is not out of the question. The key feature of the Starwheel is where it gets the name: the star-shaped wheels that drive the hour discs on the dial. While on the original Star Wheel the discs were clear sapphire thus showing off the mechanism below, the new Starwheel opts for solid black discs that reveal nothing and instead emphasise the wandering hours display.

The look is minimalist and modern, especially when combined with the predominantly dark colours of the dial. Even though the dial is mostly black and blue, it has a nuanced appearance thanks to the fine finishing of the components and the aventurine-glass base. The steel components for the wandering hours are all finished well – brushed on the top surface with mirror polished bevels along most edges. Because most of the components are open worked, there is lots of mirror-polished bevelling that catches the light nicely. This, along with the sparkly aventurine glass, gives the dial an eye-catching reflectivity despite the dark colours. Unlike the original that used classical serif fonts for its numerals, the new Starwheel relies on a no-frills, sans serif font for the numerals. While it might seem like a lack of imagination at first glance, the typography works well with the modern styling.

What doesn’t really work is the central seconds, which the designers should have left out. Conceptually it doesn’t really fit in with the wandering hours since the complication is about telling time in a gradual, silent manner. Functionally the Starwheel display is identical to the original, though it is constructed differently. The specifics of the construction are not known since AP hasn’t releases technical drawings, but it is a certainty that hour discs are driven by “star” wheels with more numerous teeth, allowing them to continuously rotate. In contrast, the original had discs that moved periodically as the discs were driven by wheels with relatively fewer and larger teeth.

The Starwheel is powered by the cal. 4310, which is essentially the time-only base movement with the addition of the wandering hours module o top. It’s latest watch to contain a movement from the 4300/4400 family, the latest generation of calibres from AP. Conceived as a workhorse movement versatile enough to accommodate a variety of complications, the 4300/4400 movements made their debut in the Code 11.59 in 2019 but are now found across the model range, including the Royal Oak. They are modern, high-spec movements that run at a high frequency of 28,800 beats per hour while having a long, 70-hour power reserve. And they also boast a large, free-sprung balance. At 32 mm in diameter, the 4300/4400 calibres are fairly large, which is why they are found in watches that are 41 mm and larger. That said, the movement would still allow for a case of under 40 mm, albeit not with the unusual, “sandwich” construction of the Code 11.59 case.

Despite the addition of the Starwheel display – with a trio of discs that are heavier than conventional hands – as well as an unchanged frequency, the movement still manages an unchanged, 70-hour power reserve, indicating that the base calibre delivers consistent, high torque that’s enough to power energy-intensive complications. Because the movement inside is essentially the same except for the time display, the view from the back is identical to that for the time-and-date Code 11.59 model. Despite the ostensible simplicity, the view is still a good one. The movement is finished well in an industrial-artisanal manner  that is now the norm for large, high-end brands like AP. It’s essentially decoration that is mostly done by machine – but in a refined manner – along with enough finishing touches done by hand that the result is appealing. While it is probably not “better” than the original Star Wheel in terms of styling – the original does have an elegance that the new model lacks – the Code 11.59 Starwheel is certainly more impressive. It is a more accomplished watch in terms of execution, with a more sophisticated movement and improved finishing.

And at US$57,900, it isn’t much of a value buy, but it does feel fairly priced. That’s about the same as the 18k gold Royal Oak chronograph on a leather strap, which makes the Starwheel arguably better value since it is more interesting from a technical standpoint. Limited edition: No
Availability: At boutiques and AP Houses
Price: US$57,900 excluding taxes