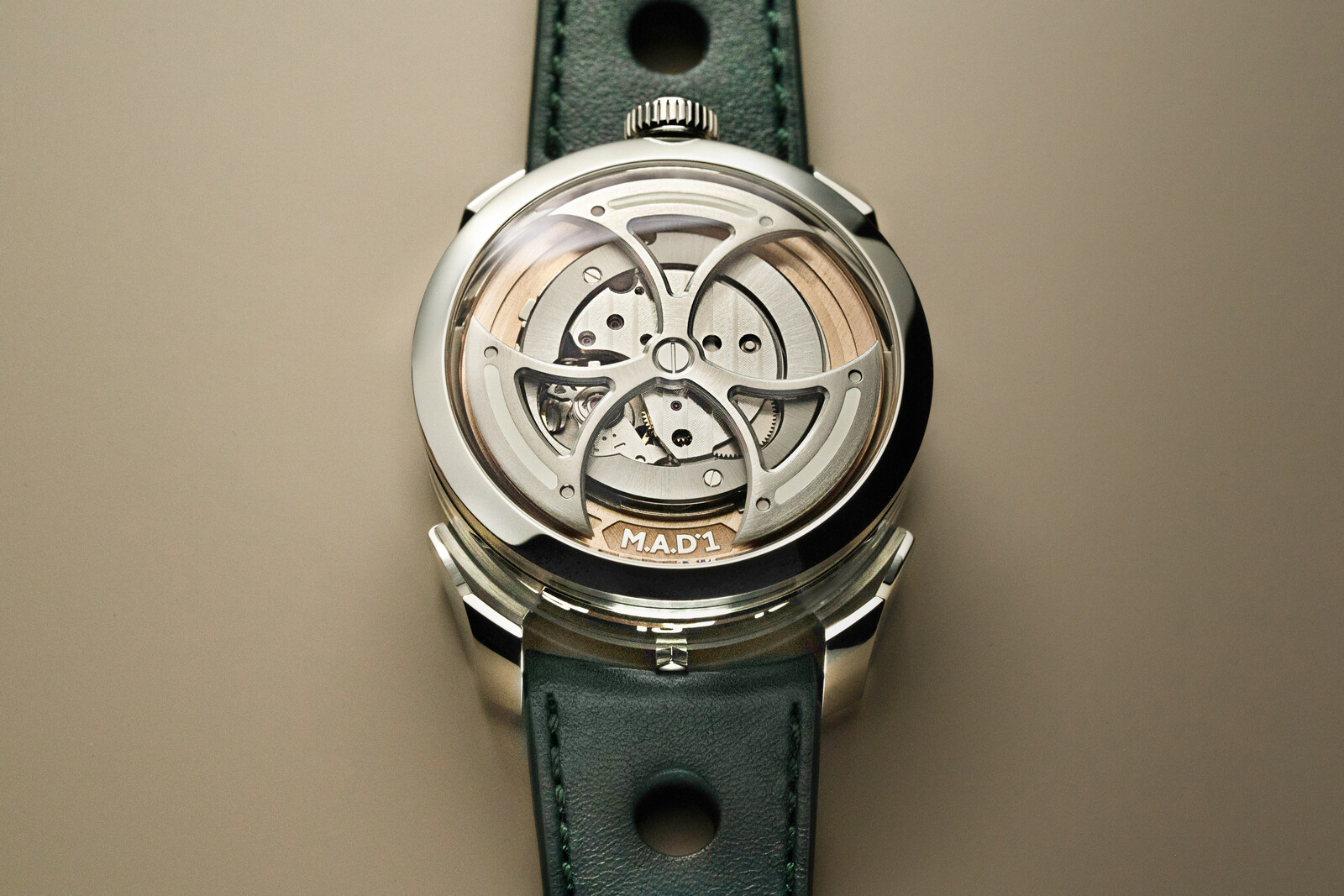 Designed and assembled by MB&F, the M.A.D. 1 was initially conceived as a limited-edition thank-you for the brand’s longstanding collectors known as the “Tribe” and its suppliers. It then became a standard production model, allowing the wider public access to the most affordable creation ever released by the independent watchmaker. Now MB&F has created a limited edition for GMT Italia, the retailer owned by the Corvo family, the M.A.D. 1 “GMT Milano”.

MB&F embodies independent watchmaking, in my opinion, because it creates a whimsical yet alluring timepiece with authentic design and ingenuity. But its creations, typically priced in the six figures, are out of reach for the average collector. That’s where the M.A.D. 1 comes in. 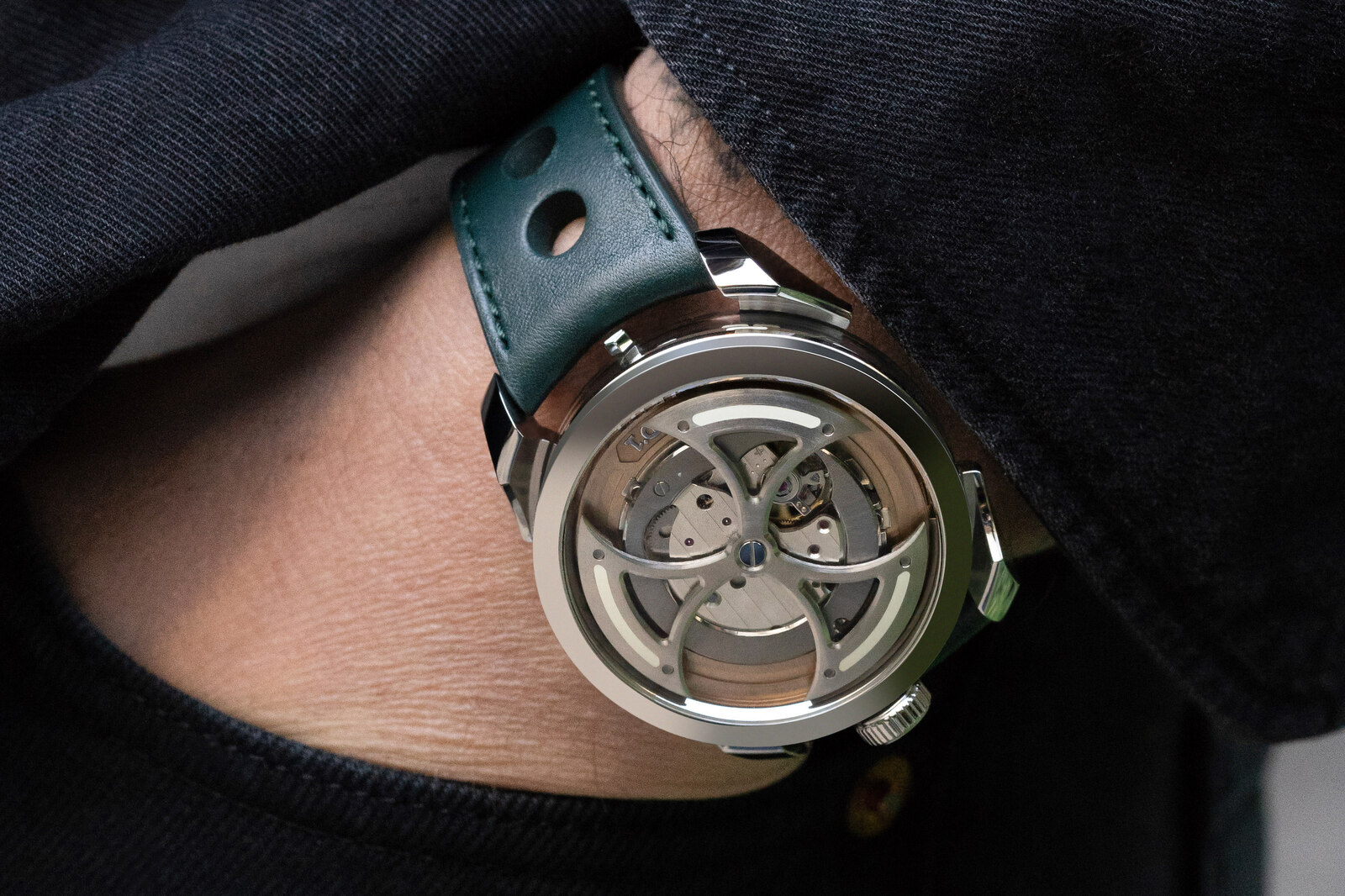 The M.A.D.1 “GMT Milano” costs the same as the regular production model, making it an appealing proposition for something with the flavour of avant-garde independent watchmaking without breaking the bank. With only 30 pieces, it will no doubt sell out immediately, but lucky 30 buyers will definitely have an uncommon M.A.D. 1 edition that stands out from its peers. 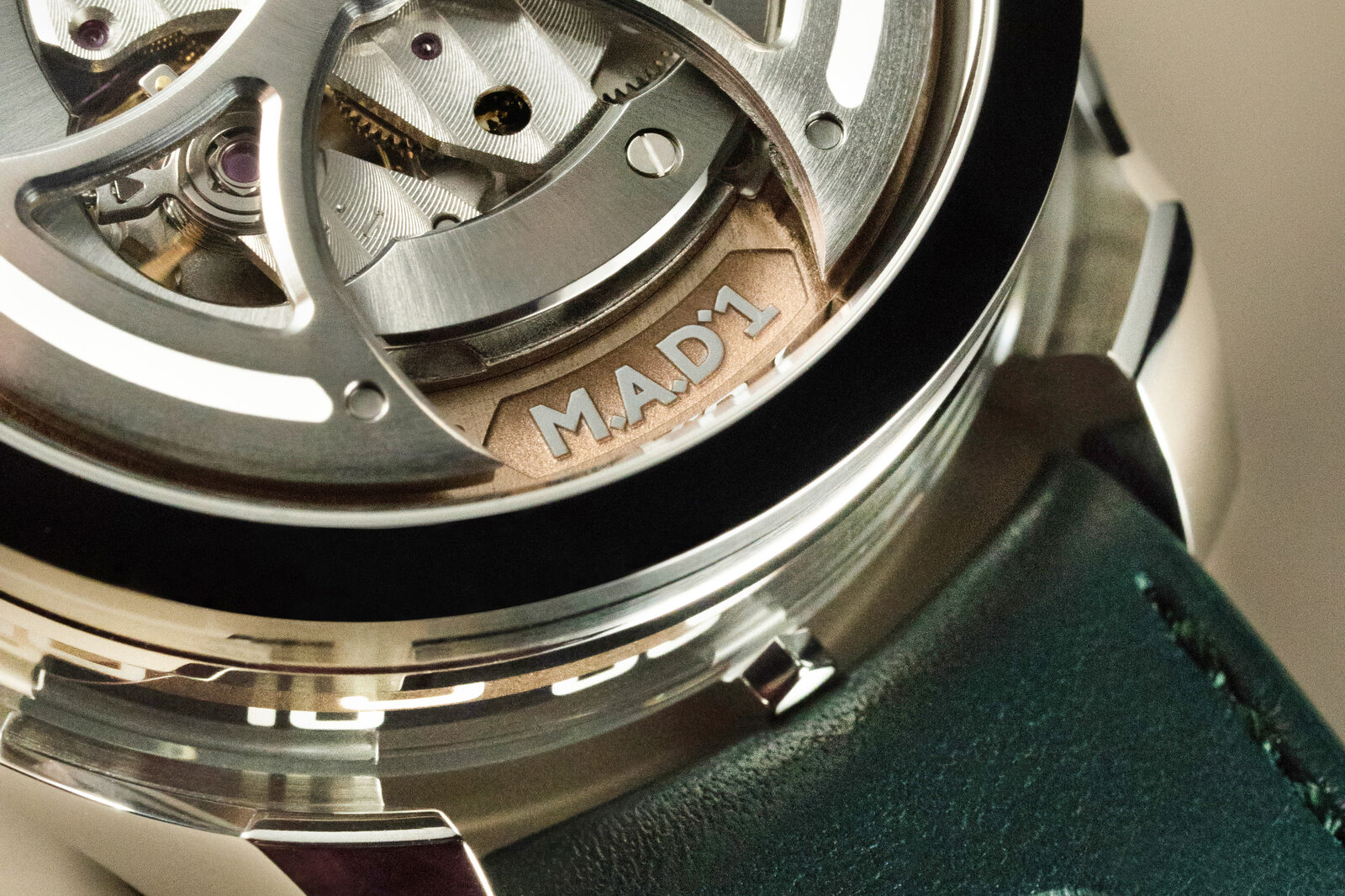 More broadly, the M.A.D. 1 is avant-garde in terms of design and certainly looks like an MB&F creation – but it is executed in a very economical manner. While the design is striking, one reservation I have with the M.A.D. 1 is the case construction, which relies on glue to secure all the parts together. But again, for what it retails for, that is acceptable.

And on the subject of value: some examples of the standard M.A.D. 1 have changed hands for three to four times the retail price on the secondary market – an absurd value considering its intrinsic features and the alternatives at the US$10,000-mark. And it is likely that more M.A.D. 1 editions like this will be launched in the future, so it will pay to be patient. 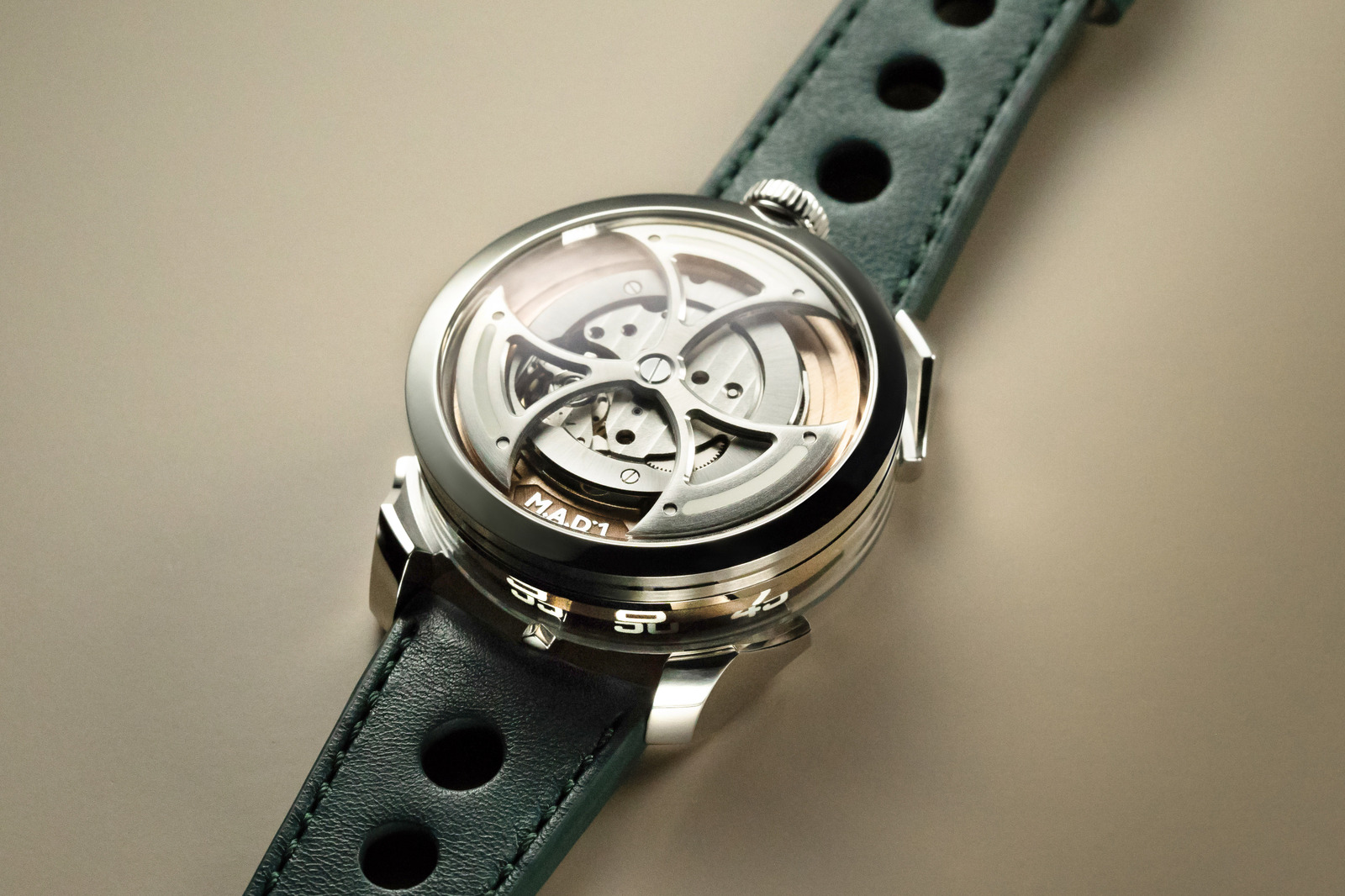 It is not surprising that MB&F founder Maximilian Büsser chose his most accessible creation to mark his partnership with GMT Italia. Short for Great Masters of Time, the retailer was established by father-and-son duo Giorgio and Michele Corvo. Mr Büsser’s relationship with the Corvo family began with his stints at Jaeger-LeCoultre and Harry Winston in the 1990s and continued with the launch of MB&F in 2005.

The M.A.D. 1 “GMT Milano” pays tribute to this friendship. It features a gold-plated pink finish on the movement, a first for the model. According to Jacopo Corvo, one of the brothers who now run GMT Italia – both are the sons of Michele – the colour is reminiscent of other limited editions made for the retailer by watch brands over the years. 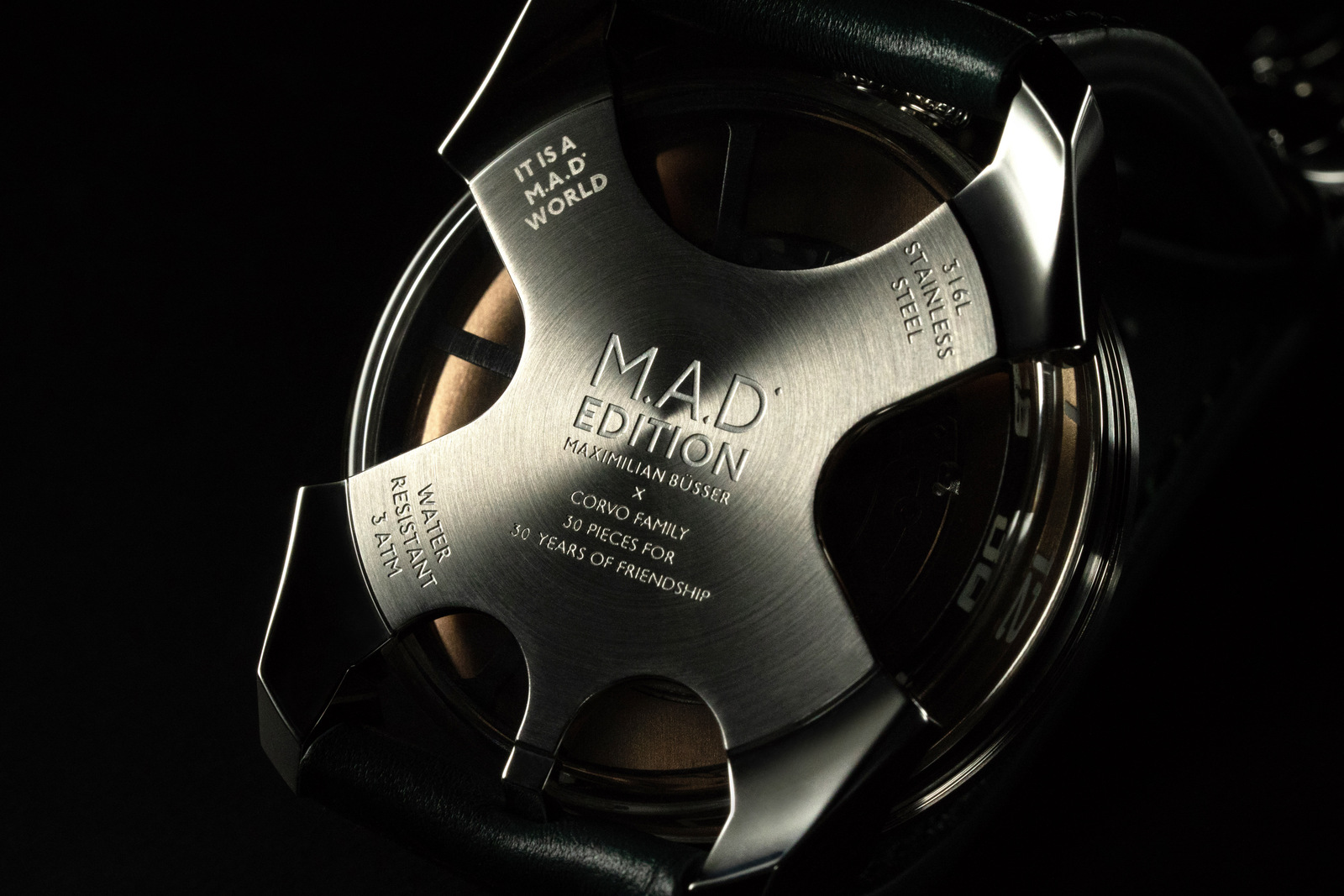 An inscription on its case back attests to the relationship between Mr Büsser and the Corvos: “ Maximilian Büsser x Corvo Family, 30 Pieces for 30 Years of Friendship”

Apart from the gilded finishing for the face, the M.A.D. 1 “GMT Milano” is identical to the standard edition. The case is 42 mm in diameter and 18.8 mm in height. That might sound hefty, but it is a lightweight watch, in part due to aluminium rings for the time display. 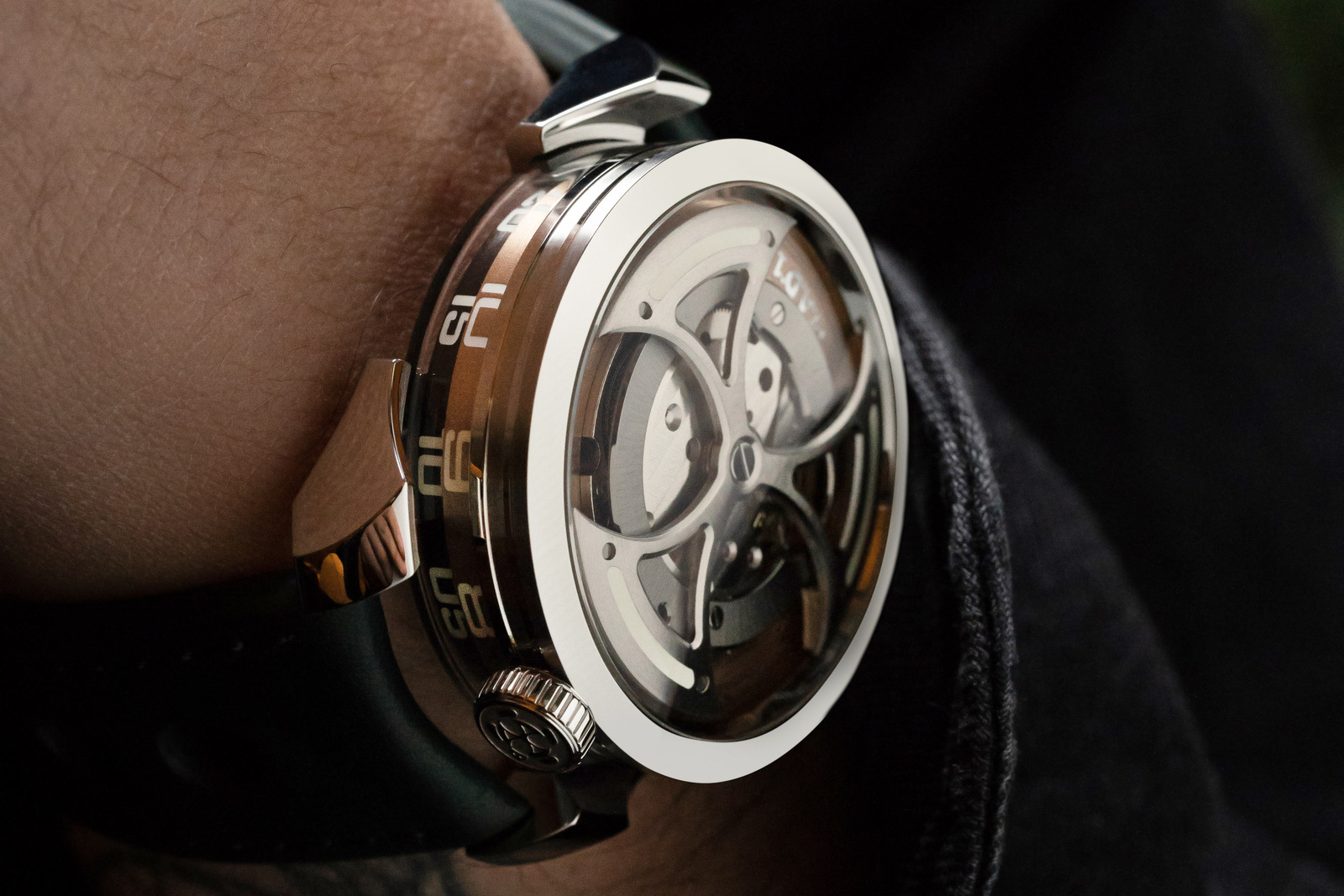 Rather than traditional hands, the M.A.D. 1 “GMT Milano” relies on rotating rings to indicate the hours and minutes in a lateral display that is read in a manner similar to MB&F models like HM8 “Can-Am”. The time is read from the lower edge of the watch at six o’clock, while the crown is opposite at 12 o’clock.

The M.A.D. 1 is powered by a Miyota cal. 821A that has been inverted, so the rotor is visible on the front. The time rings are then driven by long spokes connected to the cannon pinion on the back. Notably, the M.A.D. 1  has a three-armed “battle axe” rotor just like that found on the pricier MB&F offerings. 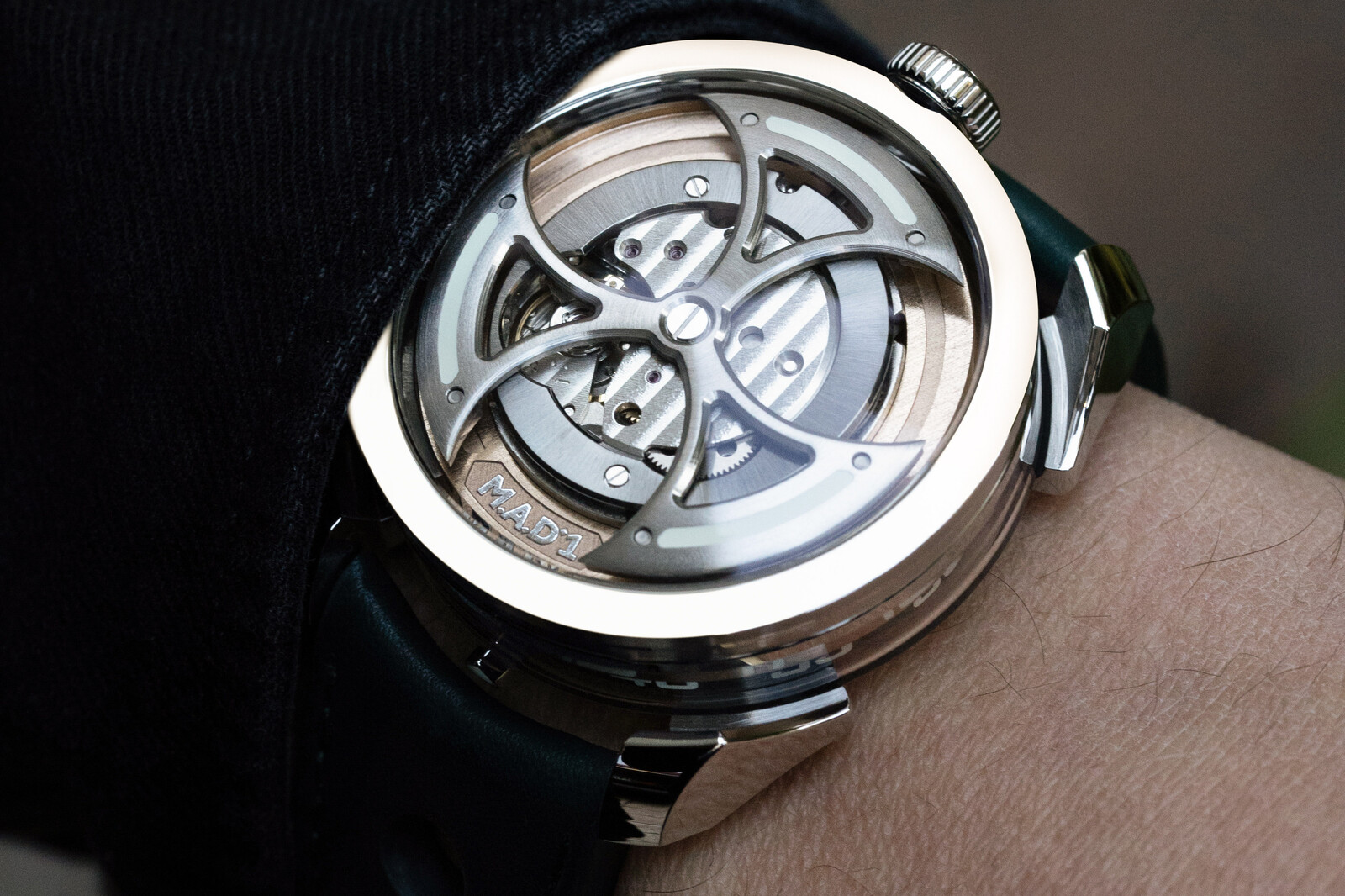