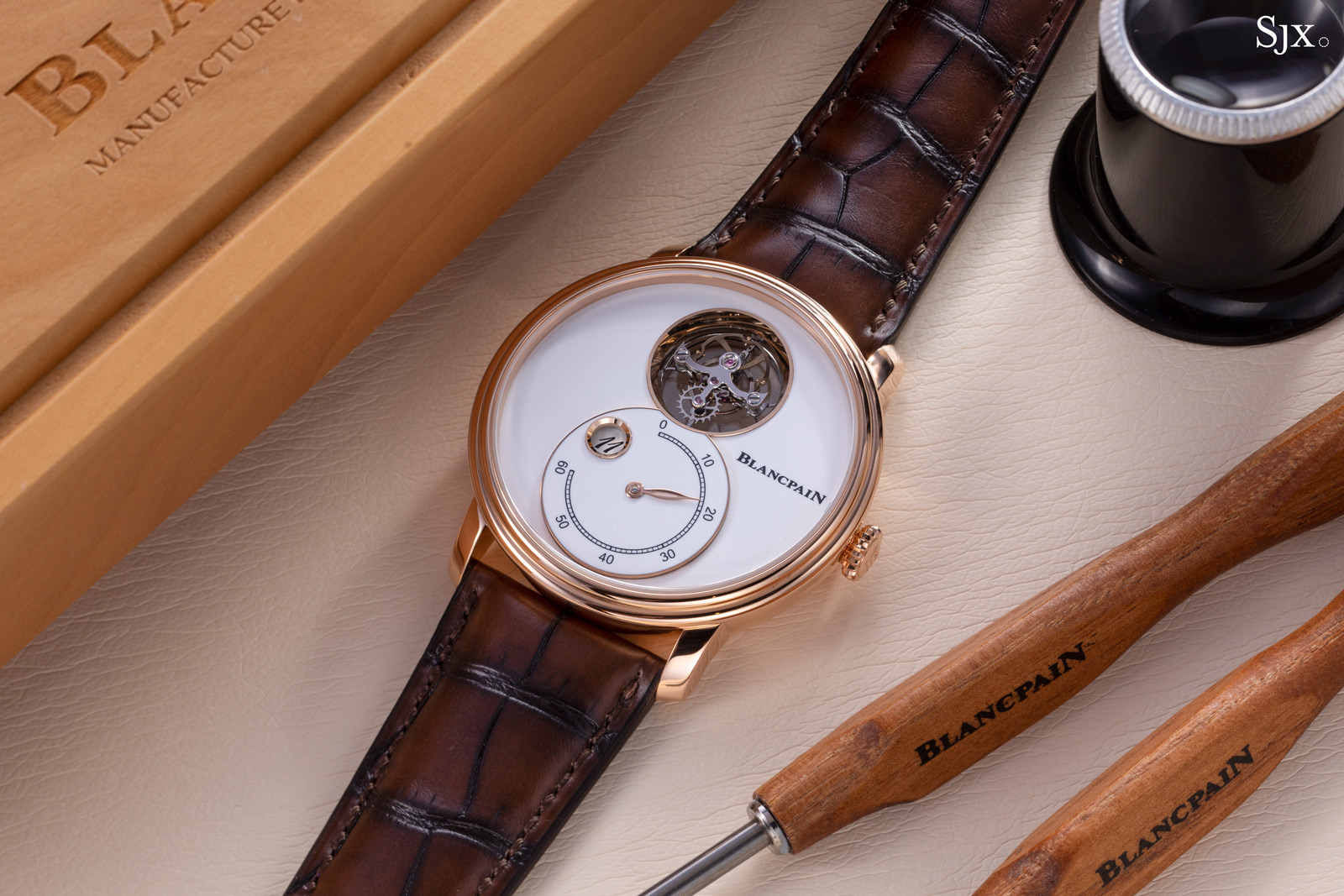 While Blancpain is best known for its retro dive watches and triple calendars, the brand’s catalogue includes a surprisingly broad range of complications, especially for a brand of its scale (but the fact that the brand is part of Swatch Group clearly helps). One of its most interesting recent complications is the Villeret Tourbillon Heure Sautante Minutes Rétrograde, the first Blancpain watch with either a jumping hours or retrograde display.

Despite the lengthy name, the Tourbillon Heure Sautante Minutes Rétrograde, from now on simply THSMR, is a simple watch on its face, but one executed in an elaborate manner with details that speak to its quality. The dial is champlevé enamel with a symmetrical time display and “floating” flying tourbillon, while the movement has a six-day power reserve and bridges finished with guilloche.

Unlike most of Blancpain’s complications that formal and busy, the THSMR is an elegant watch with an almost minimalist design. The fired enamel dial has a figure-of-eight display that gives it almost perfect symmetry, except for the charmingly quirky hour window that is off-centre but just right. And up close the tourbillon appears to be “floating” thanks to a clear sapphire lower bridge.

It is a fairly large watch as most Blancpain watches now are, though it’s not too thick at just over 11 mm high. But the size is grounded in its mechanics: the cal. 260MR is a sizeable movement with an impressive six-day power reserve. 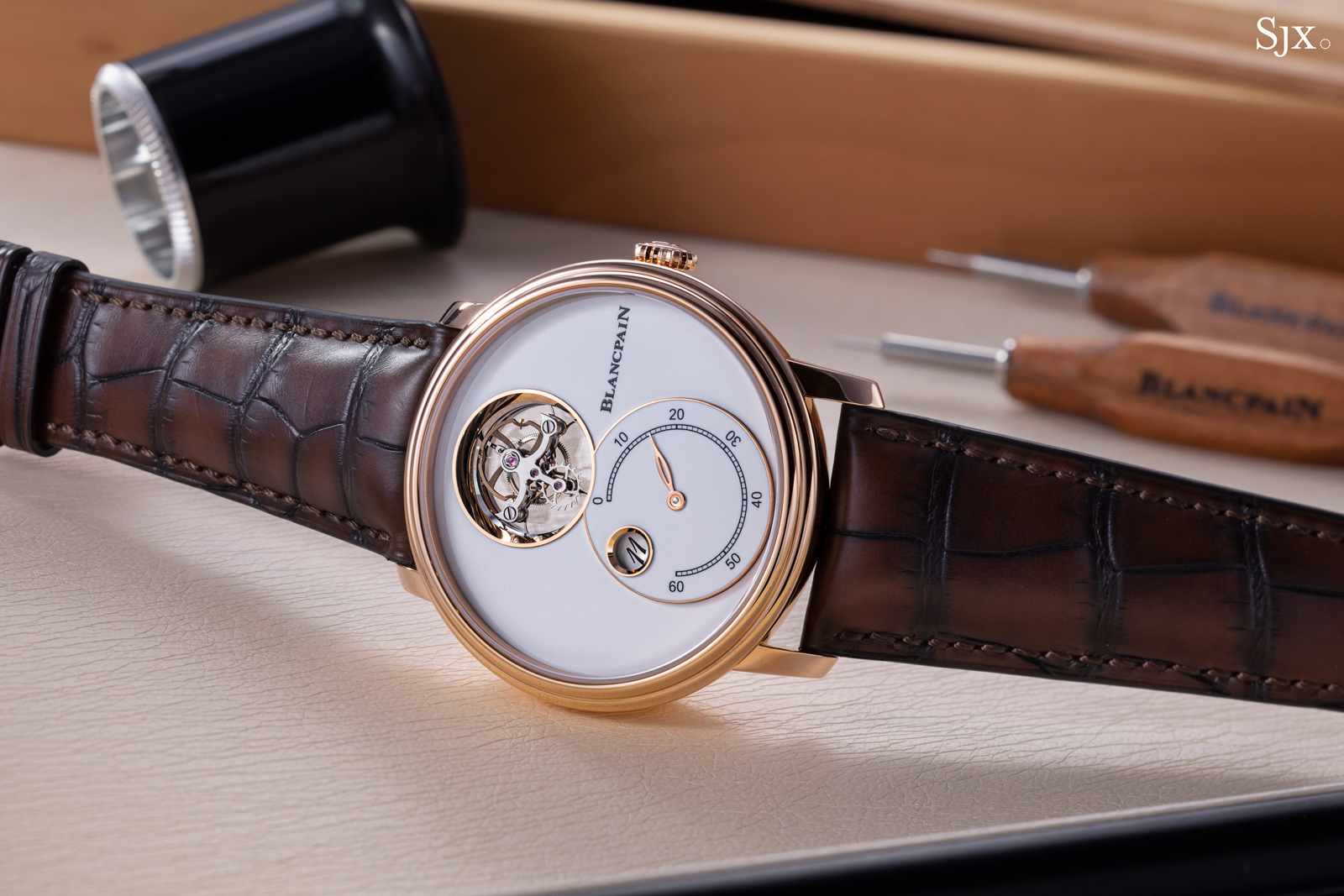 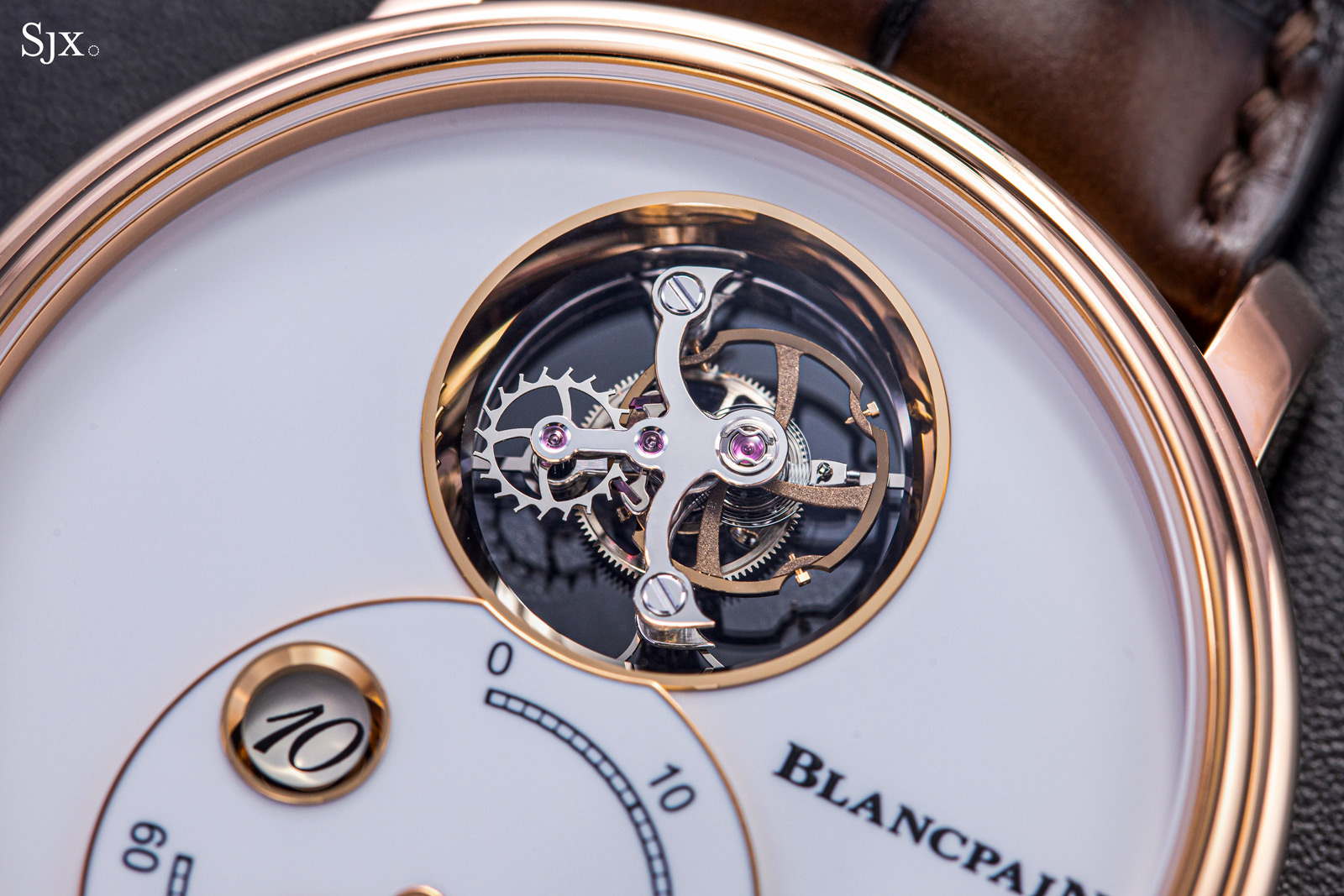 Though long power reserves are fairly common today, the cal. 260MR is impressive beyond just the numbers. It manages a running time of 144 hours despite having a trio energy-intensive complications, namely the tourbillon, jumping hour, and retrograde minutes.

Although the monochromatic palette of the movement makes it difficult to discern, the cal. 260MR is also surprisingly elaborate in its finishing. The bridges, for instance, are engine turned by hand while having the requisite bevelling.

Priced at just under US$150,000 in gold, the THSMR is something of a value proposition as such things go. The price is similar to that of tourbillon-only models from comparable high-end brands like Audemars Piguet and Vacheron Constantin, but it has the bonus of the unusual time display complication and the fired enamel dial. 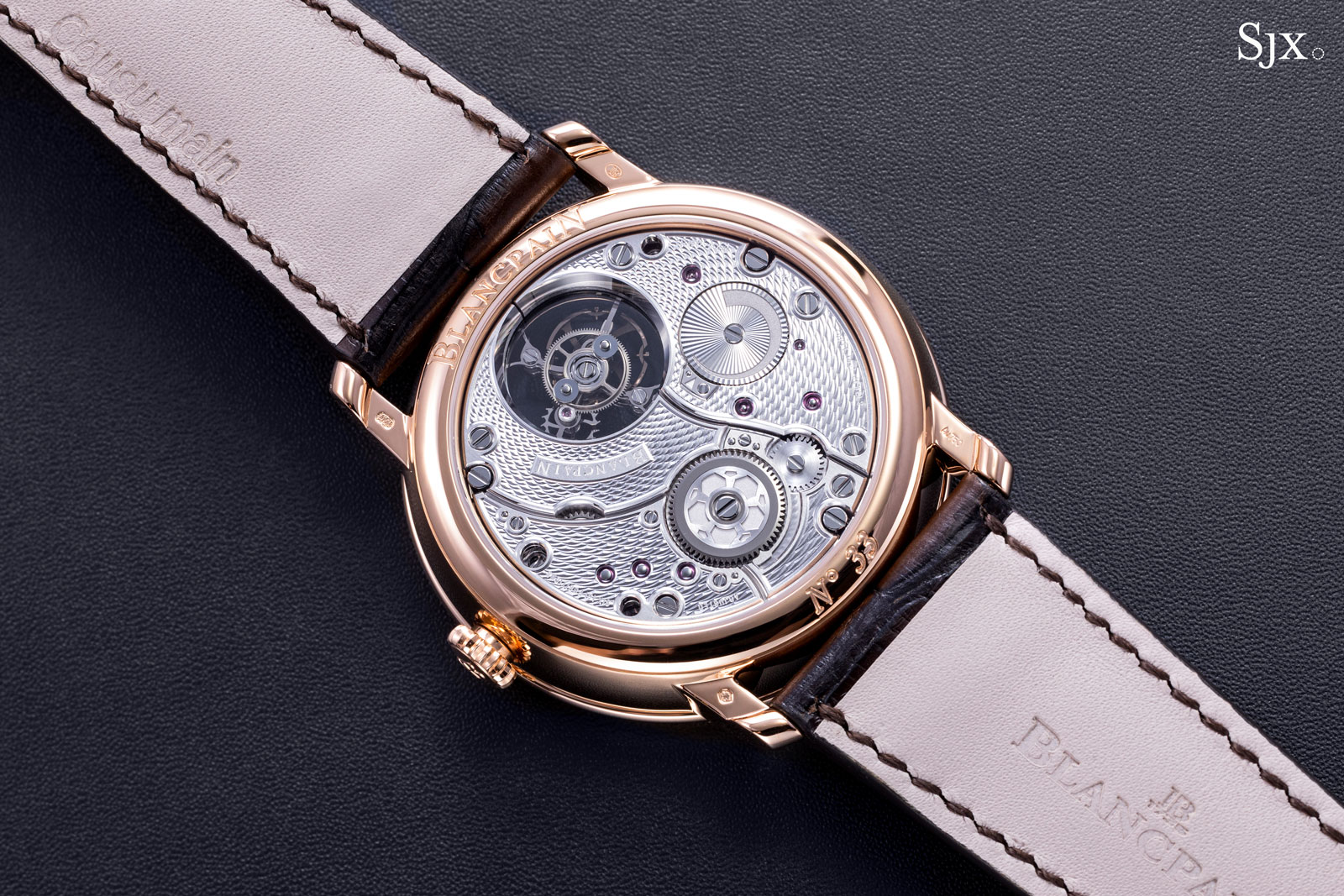 The THSMR has an understated dial with a figure-of-eight compassing all of its features, giving it a pleasing, symmetrical appearance. Although the hour aperture and Blancpain logo are asymmetrical, neither throws off the visual balance of the dial but instead give it a bit more character.

Admittedly the figure-of-eight dial does resemble the signature Grande Seconde of Blancpain’s sister brand Jaquet Droz, but it is a good look, especially for complications that are a good fit for the layout, as these are.

The clean dial also helps legibility as there is little to distract from the time display. Legibility is good despite the unconventional time display, but reading the exact minute takes a while due to the fineness of the minute scale. 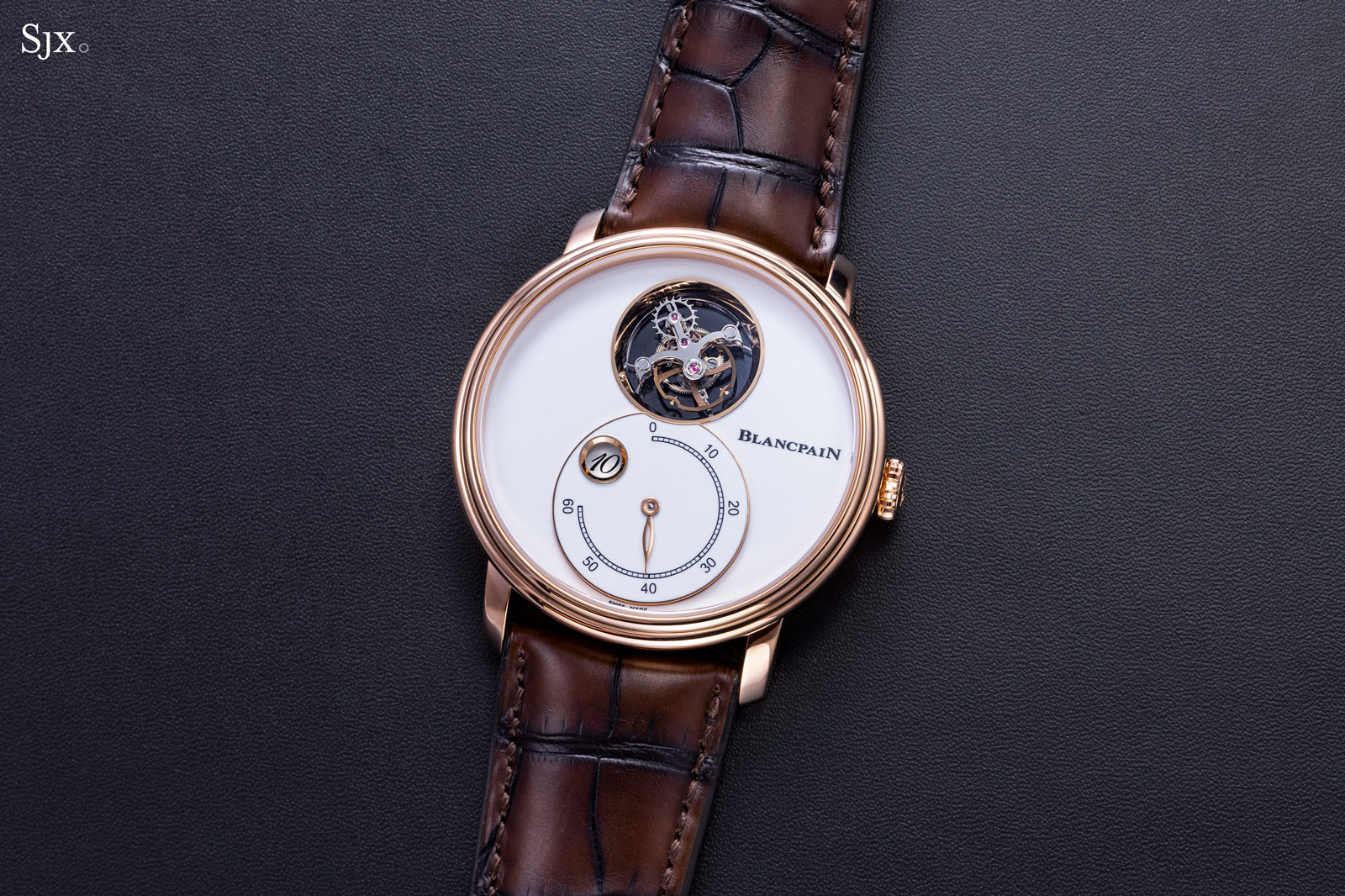 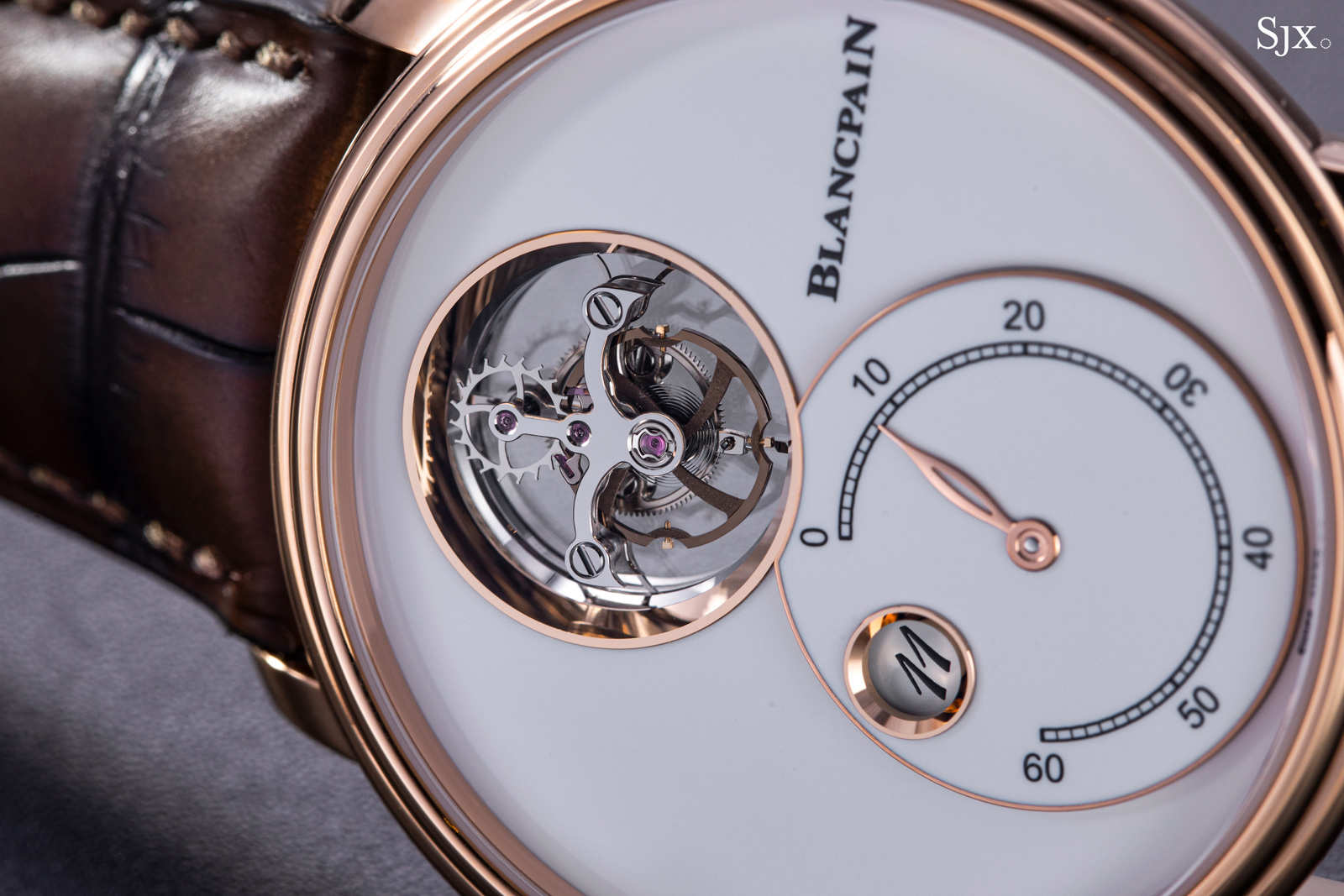 Though simple in style, the dial is expensively executed. A stark, glossy white, the dial is made up of two discs, one for the main dial and the other for the minute register. Both discs are solid gold and finished with champleve enamel.

Champleve means the discs are first engraved (probably mechanically on a milling machine) to create the raised borders visible around the minute register and tourbillon aperture. The recessed areas are then painted with enamel and the discs fired to set the enamel. Next the discs are lapped to give the enamel a mirror-like surface and ensure it is flush with the borders. 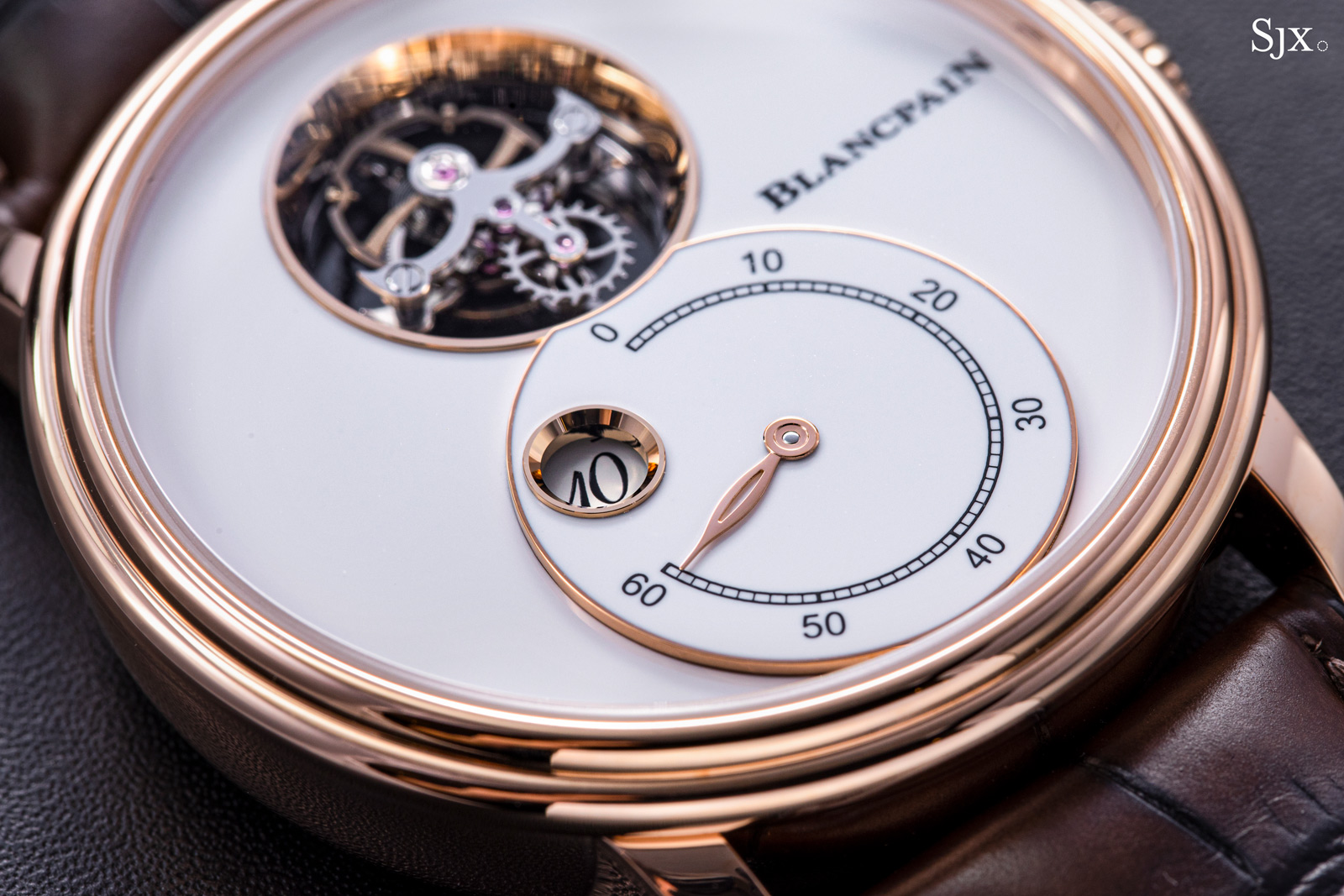 As is typical for Blancpain (and its sister companies in the Swatch Group, particularly Breguet), the enamel is executed almost perfectly. It is smooth, glossy, and betrays no visible imperfections to the naked eye. Even under a loupe it appears practically flawless.

While Blancpain doesn’t reveal the specifics of its enamel dials, the dial quality is likely due to the industrial prowess of the Swatch Group, which no doubt owns a dial maker that has perfected the technique at scale and now supplies all group brands with enamel dials. 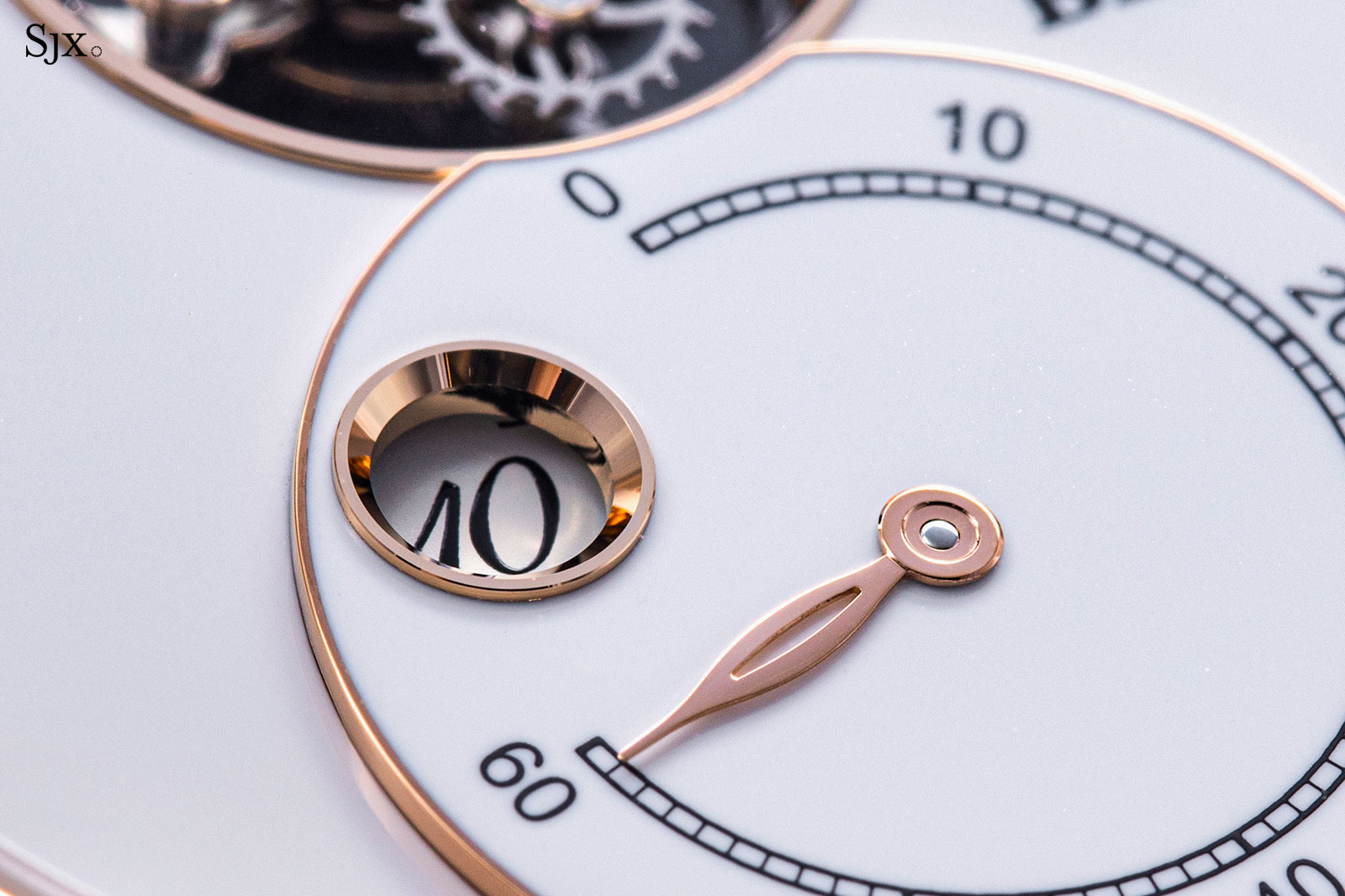 The hour display is framed by a round window that’s been milled with a diamond-tipped tool, giving it sharply defined edges and a mirrored surface

The only thing to criticise about the dial has to do with design. The sans serif font for minute numerals contrast with the elegant italic style of the hour numerals. Eliminating the minute numerals or rendering them in an italic font – either would have been preferable to them as they are. 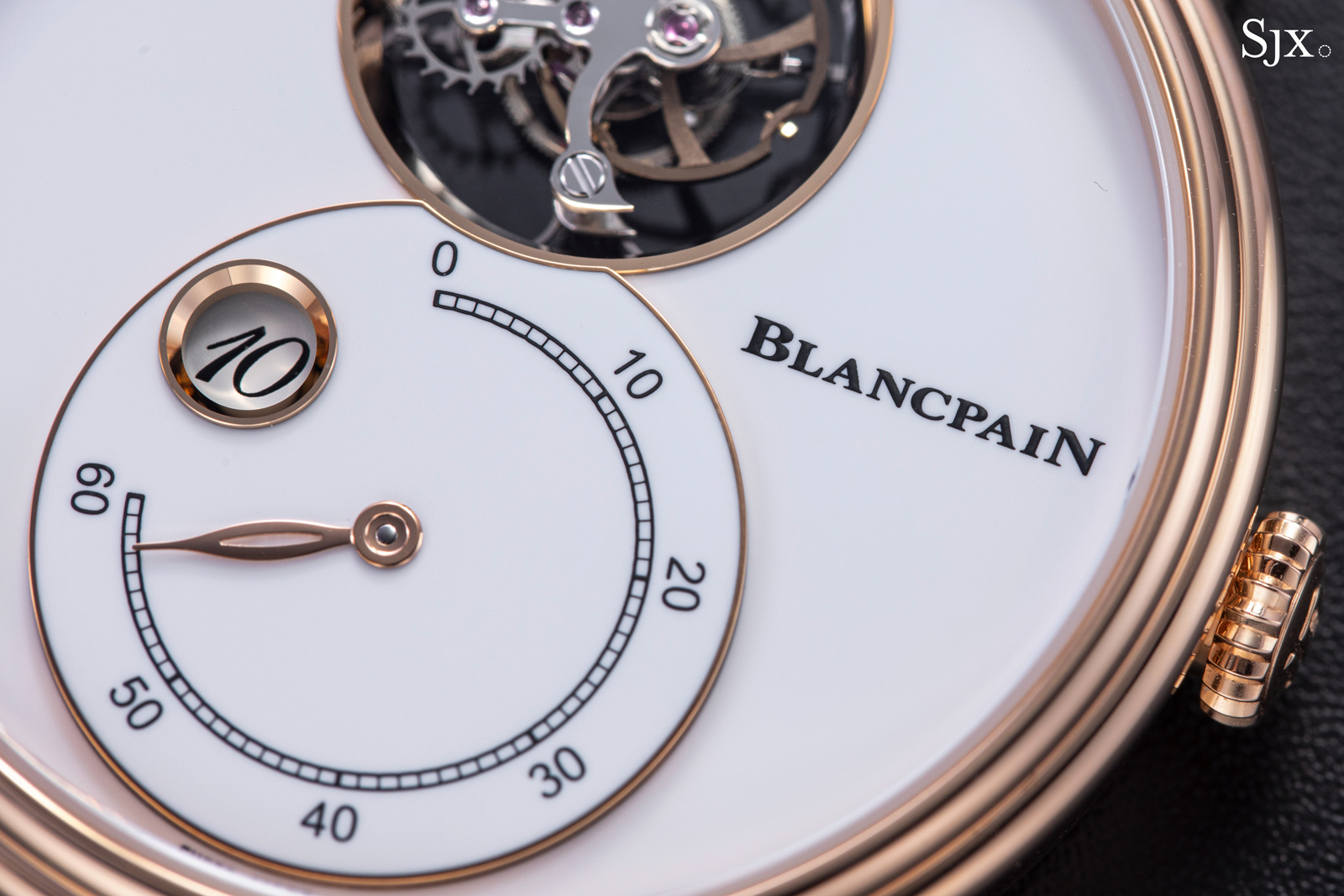 While the dial is unusually clean for Blancpain, the case is very much traditional for the brand. It’s done in the same style that’s been in use since the 1990s with a bowl-shape case middle and double-stepped bezel. Though straightforward in form, it is appropriately elegant for the design. 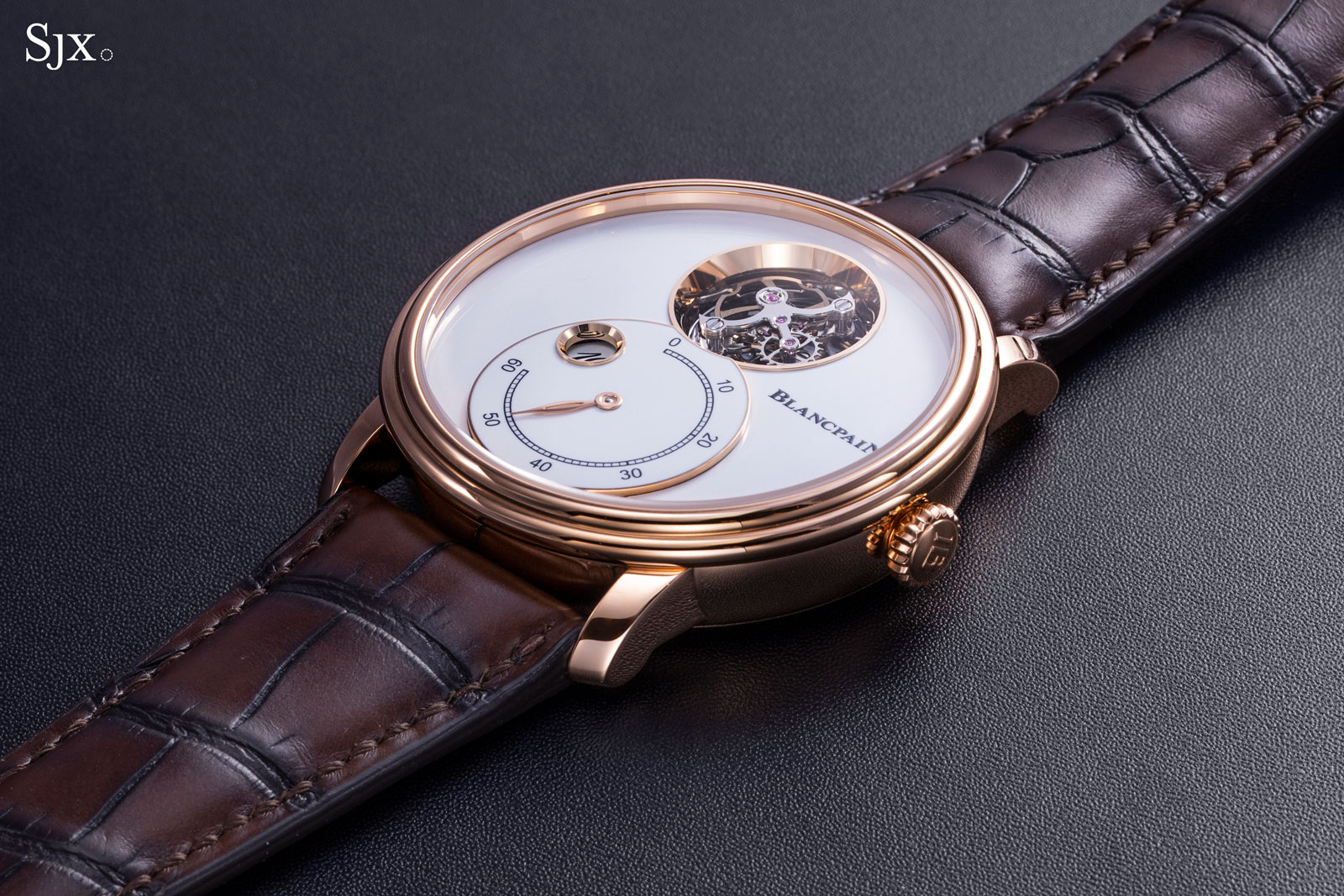 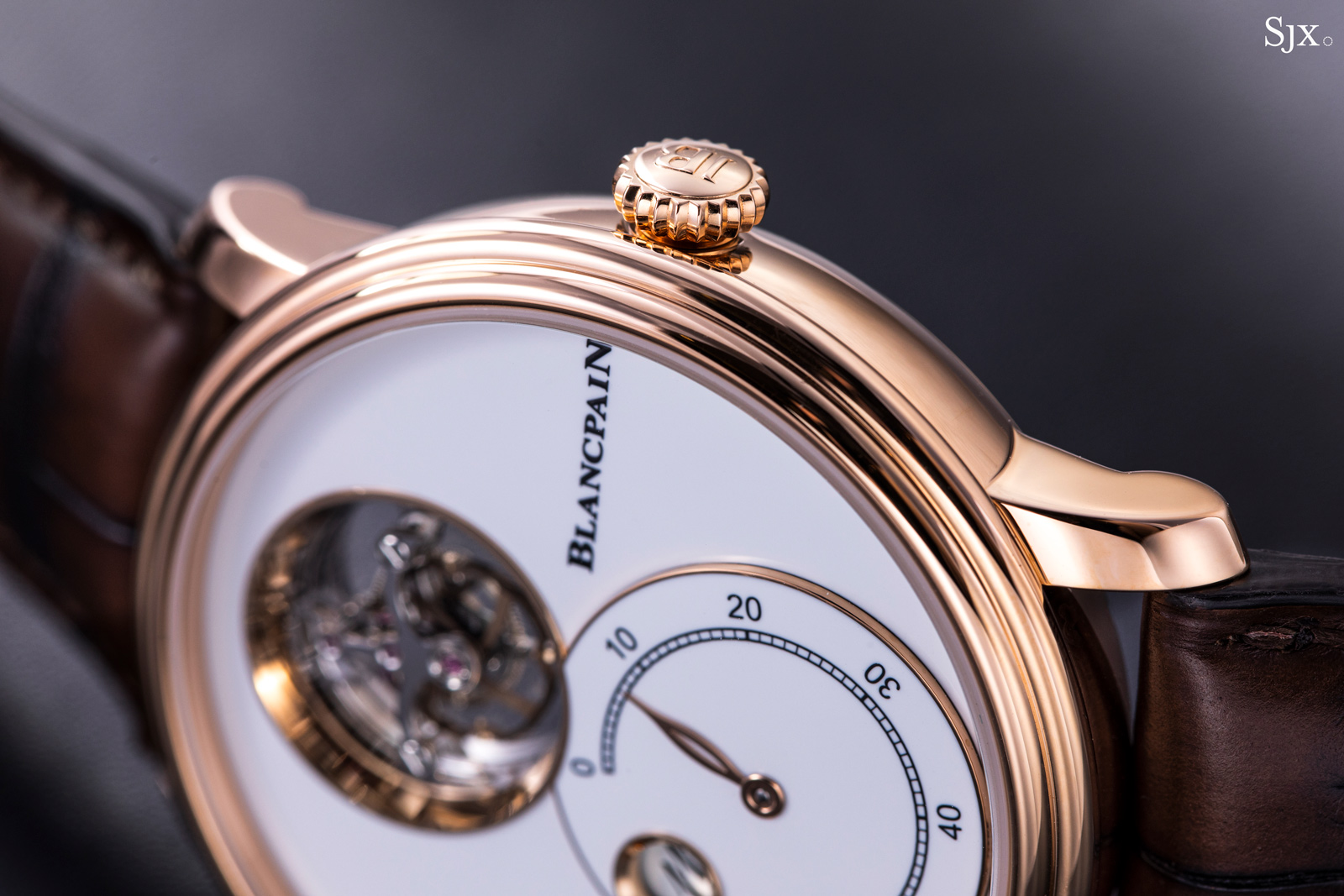 The case, however, is a little large for an elegant watch, though acceptable for the complications. It measures 42 mm wide and 11.5 mm high, which are the dimensions of a sports chronograph. That gives it a substantial profile on the wrist; the almost chunky feel is perhaps its only shortcoming. 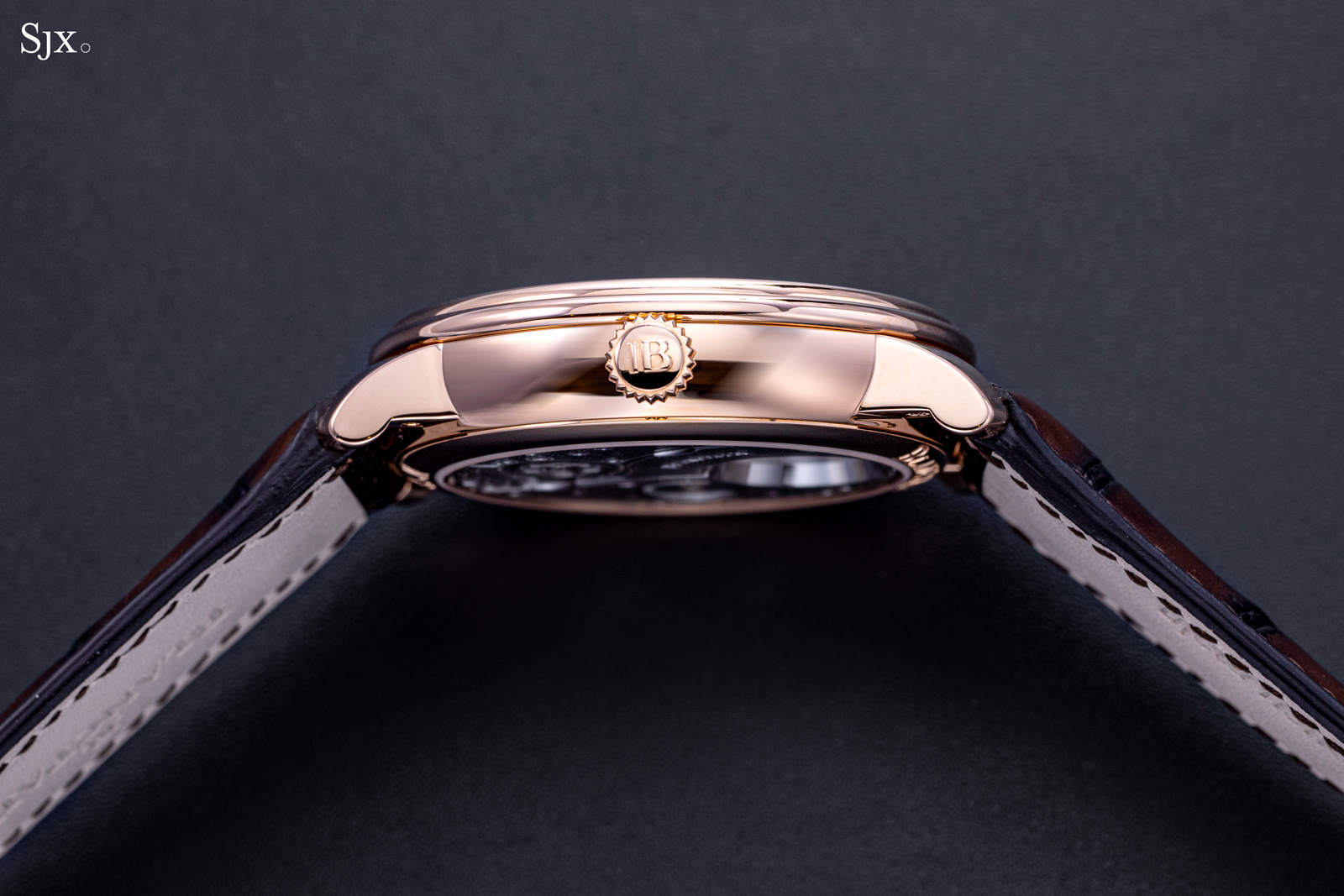 Inside the THSMR is the cal. 260MR that’s essentially a variant of Blancpain’s basic flying tourbillon movement with a 12-day power reserve – if such a movement can be called that. The cal. 260MR gets upgrades in the form of the “floating” tourbillon along with the retrograde minutes and jumping hours – both require substantial energy due to their instantaneously-jumping nature – which trim the power reserve to a still-impressive six days.

The tourbillon at 12 o’clock is instantly recognisable as Blancpain with its bird-like cage containing a balance wheel on a separate axis. This tourbillon was originally developed for Blancpain in 1989 by Vincent Calabrese, the independent watchmaker of Italian extraction best known for his form movements and creative time displays.

Now a hallmark of the brand, the tourbillon is sometimes mistaken for a carousel (or karrusel), a device similar to a tourbillon but considered less prestigious. That arises from the different axes for the cage and balance, but the Blancpain tourbillon is indeed a tourbillon in a mechanical sense because it lacks the secondary gear train that characterises the carousel. 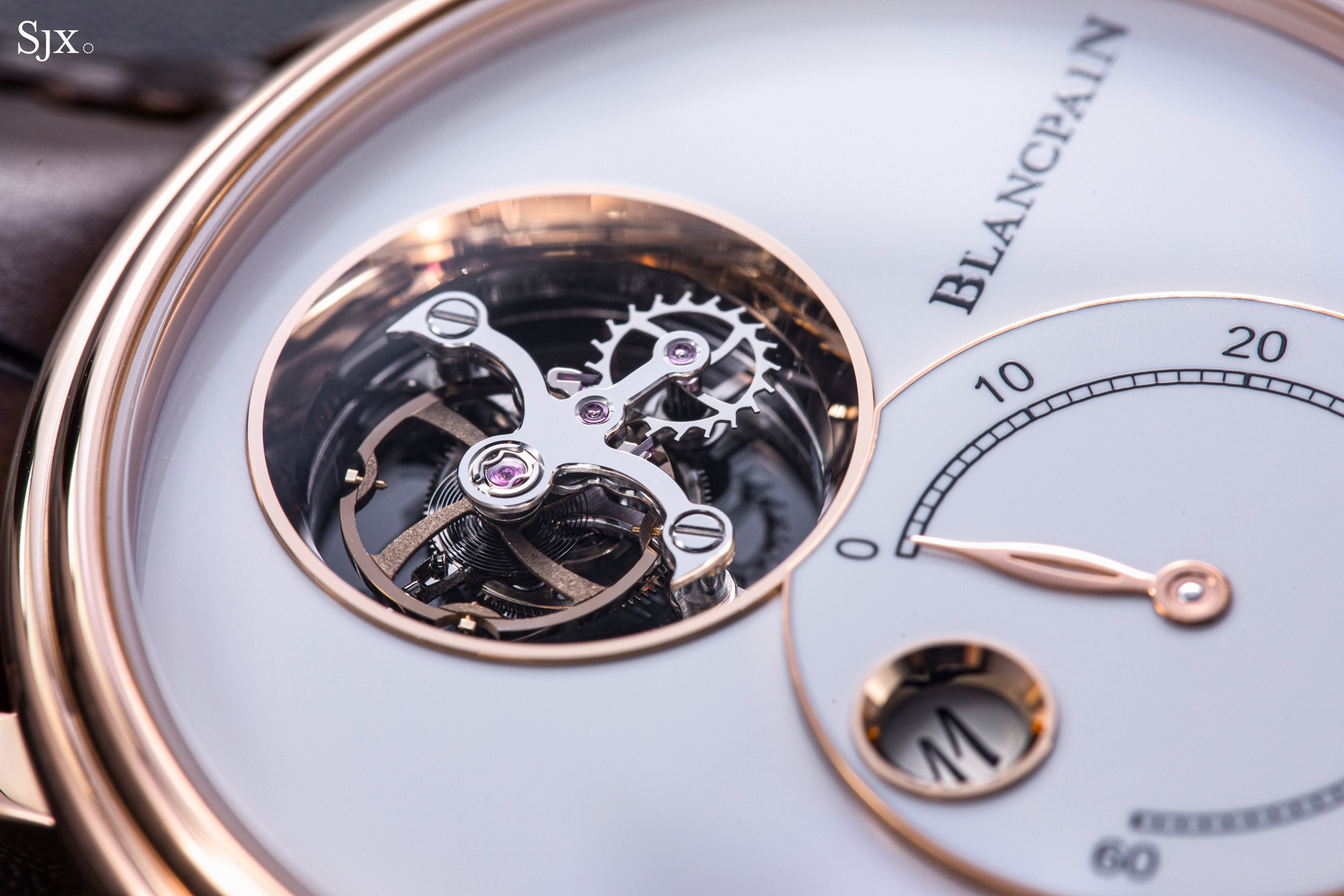 Although the tourbillon retains the traditional Blancpain style, it has been thoroughly modernised. Amongst other things it has a silicon hairspring that’s resistant to magnetism and a titanium balance wheel.

More striking is the “floating” construction of the flying tourbillon. Unlike the standard Blancpain tourbillon that has a steel bridge on its base, this has a clear sapphire disc that holds the fixed wheel of the tourbillon. As a result, there appears to be no mechanical connection between the tourbillon and the rest of the movement from the front. 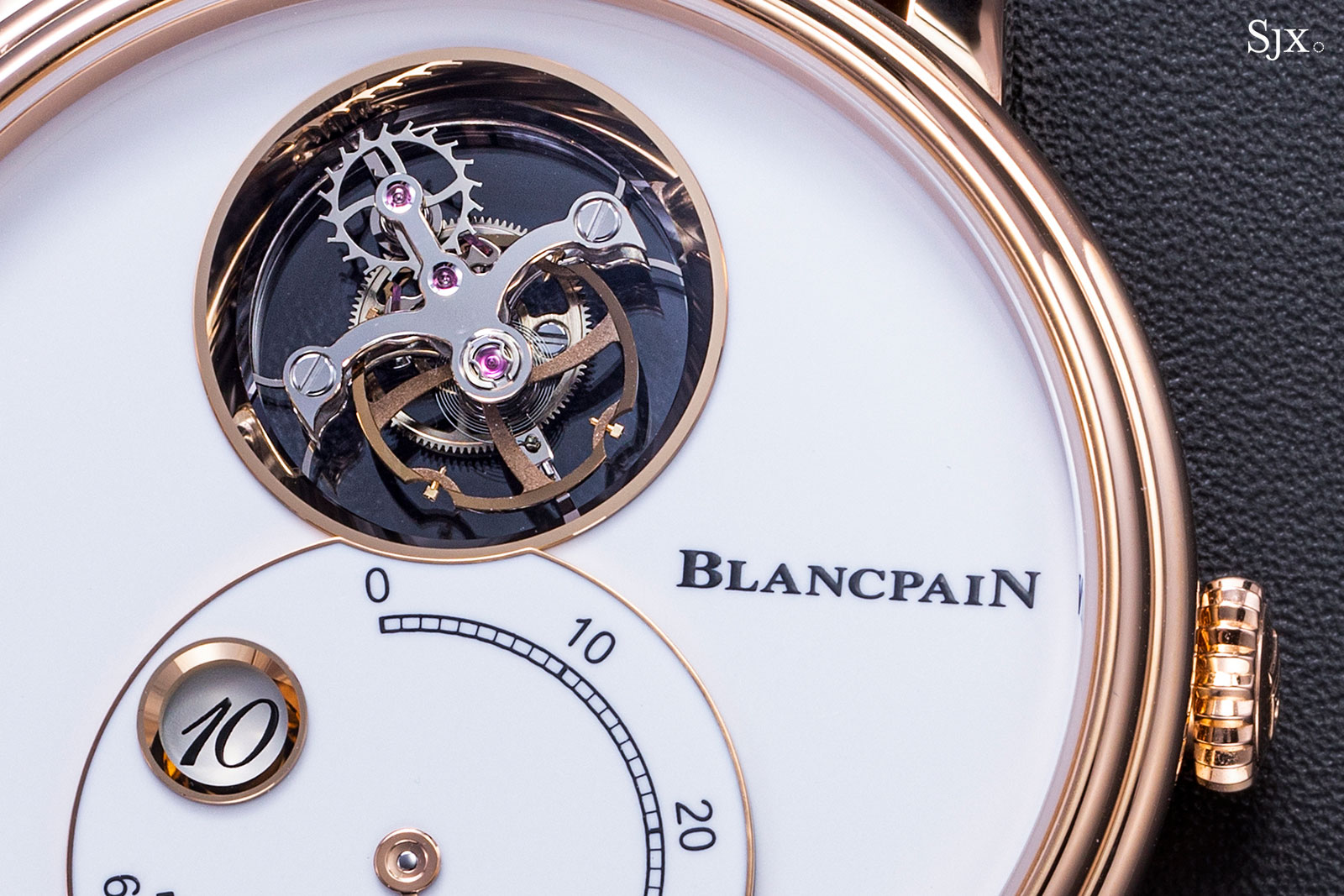 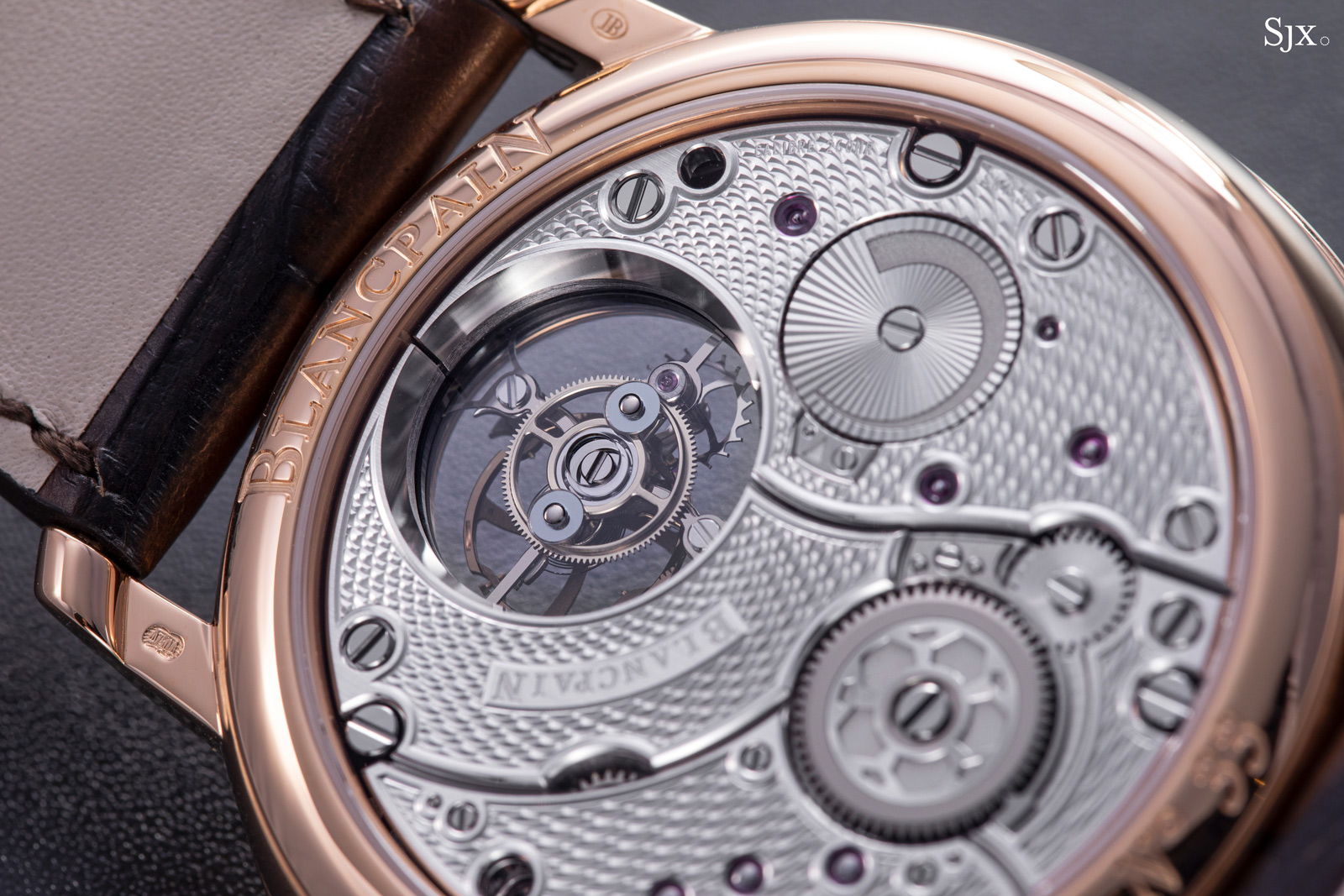 The fixed wheel secured to the sapphire plate

At a distance, the cal. 260MR appears clinical due to its unchanging colour throughout. But closer examination reveals varied, elaborate, and unconventional decoration in manner that is favoured by both Blancpain and its sister company Breguet.

Immediately apparent is the patterning on the bridges. All of them are decorated with barleycorn guilloche done the traditional way according to Blancpain, that is on a hand-operated rose engine. And the disc for the power reserve indicator is similarly engined turned by hand, but with a radial pattern. 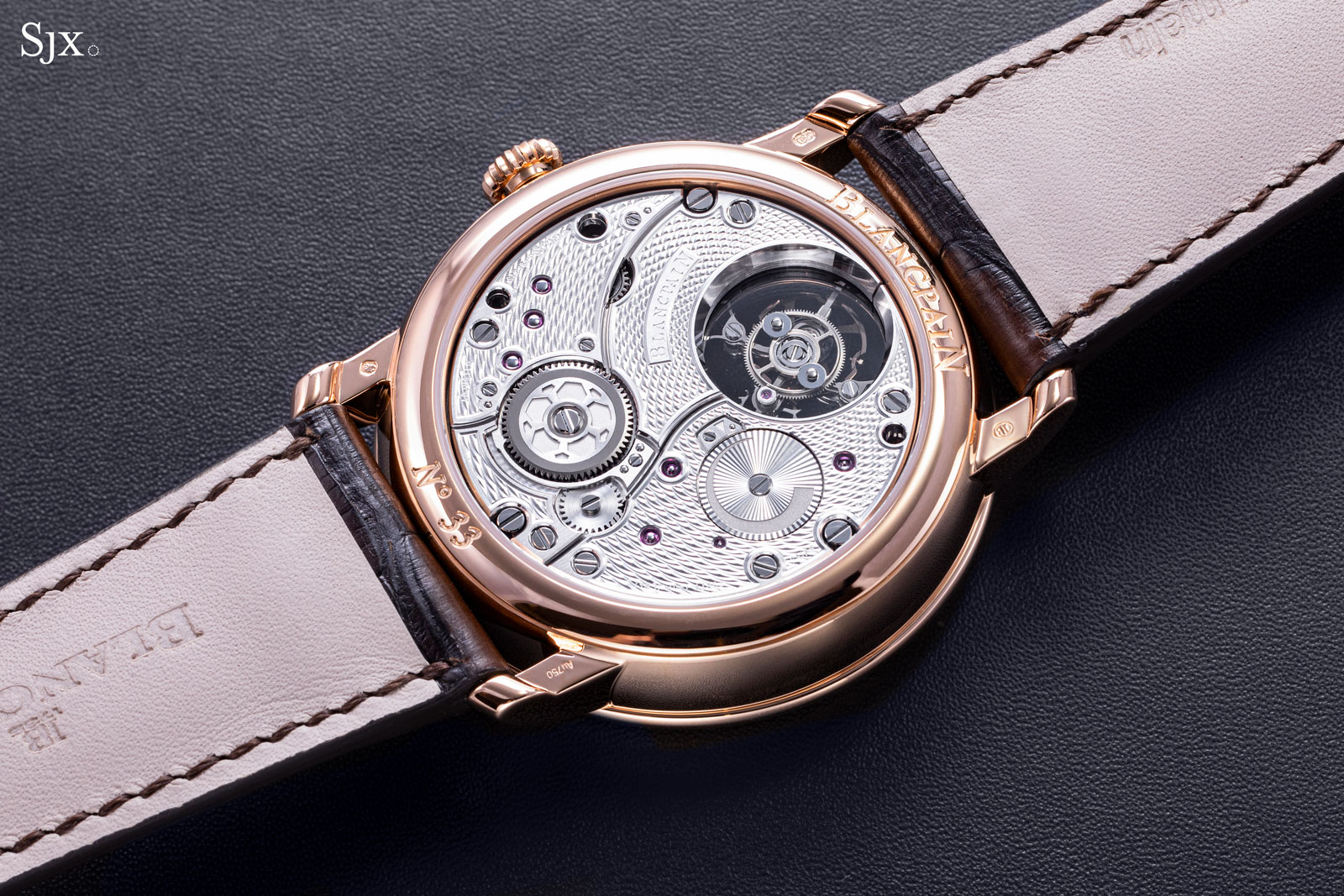 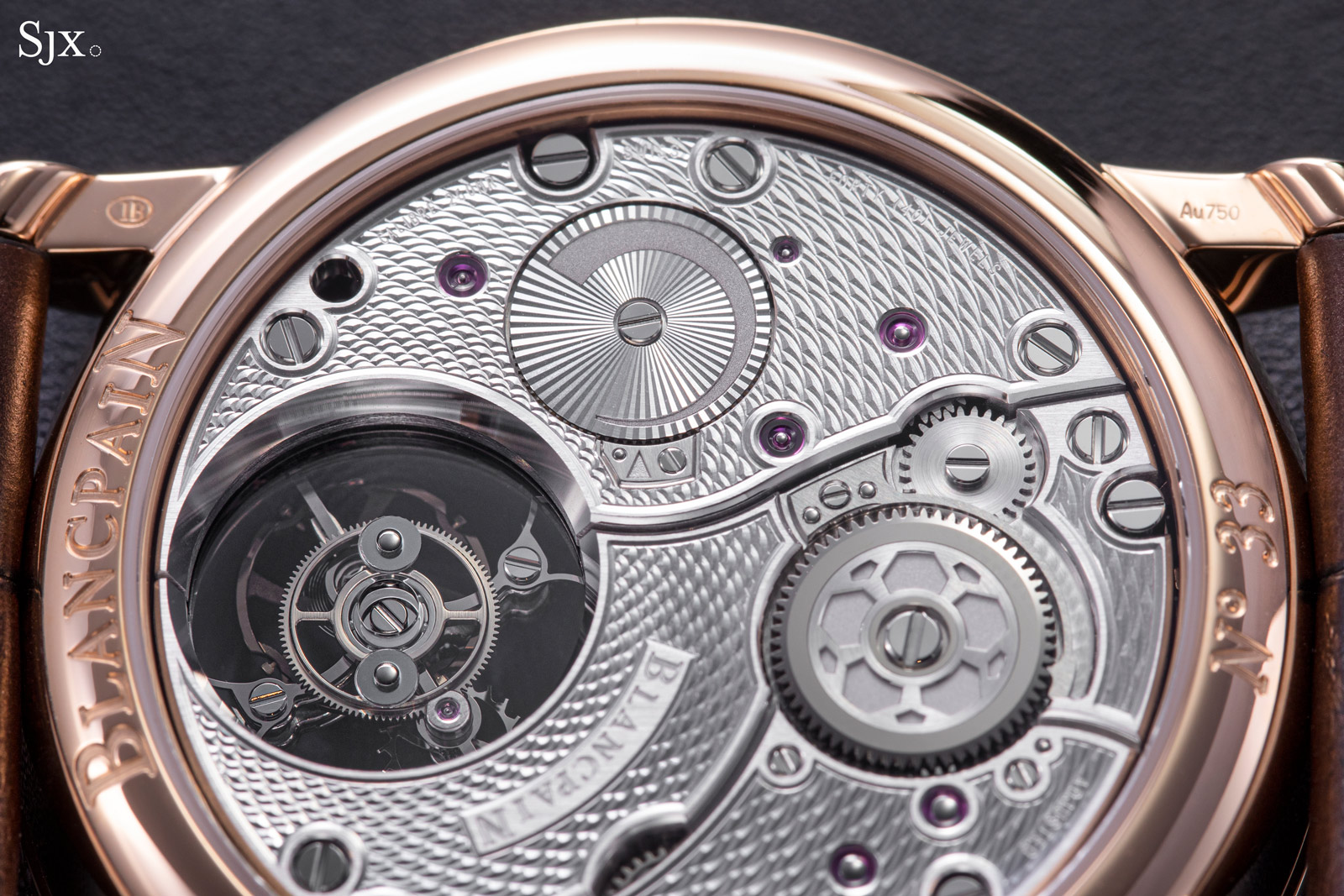 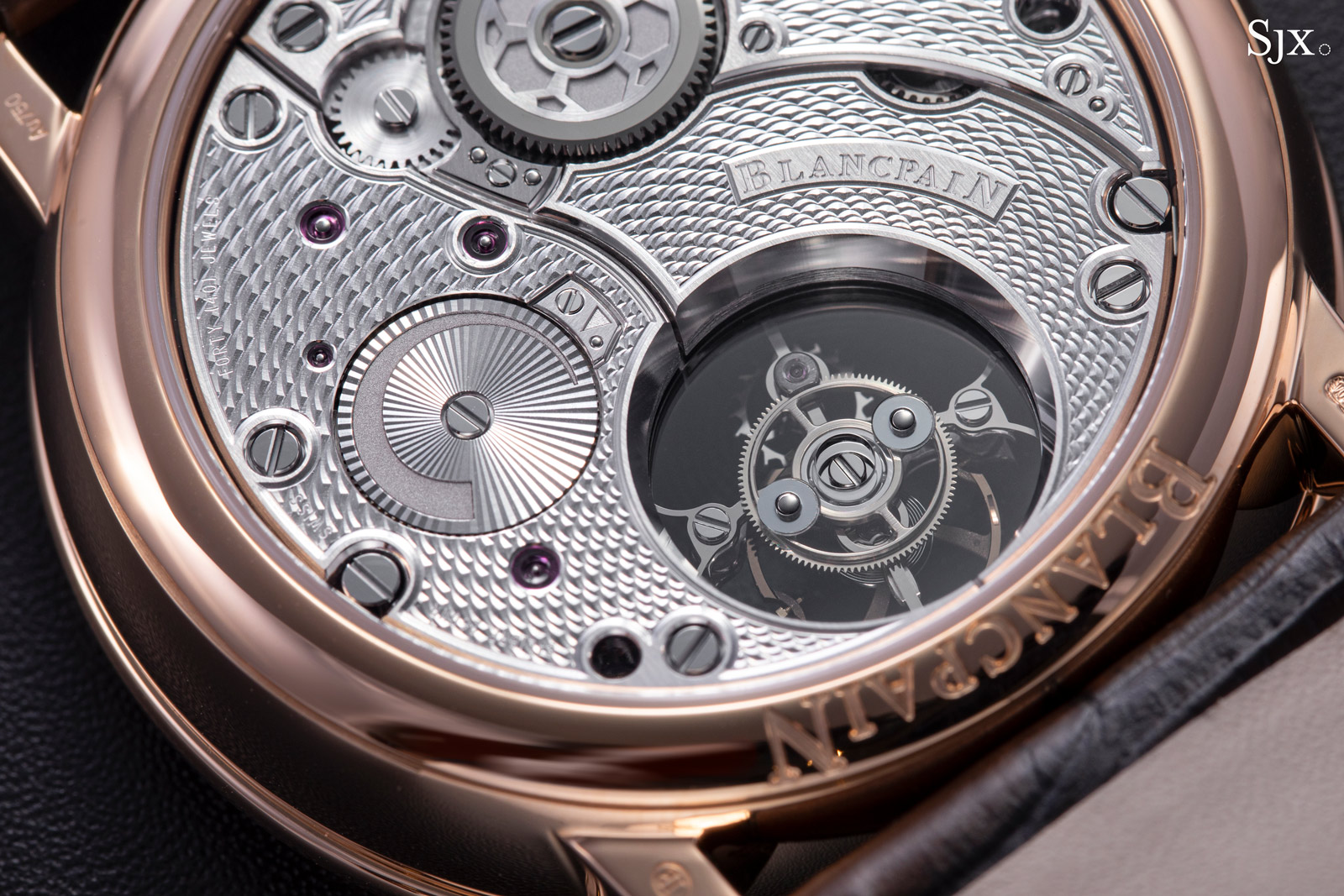 Zoom in and the decoration continues to impress. The guilloche portions are neatly demarcated by a deeply engraved border (that is probably engraved by machine and then refined by hand), while the outer edges of the bridges have hand-finished bevelling (except for the extremely wide and steep bevel around the tourbillon aperture that is milled).

Naturally all of the jewels, screws, and pins sit in polished countersinks, and all the screw heads have obviously chamfered slots and edges. Even the tiny plate with the triangle pointer for the power reserve display has countersinks and bevelled edges. 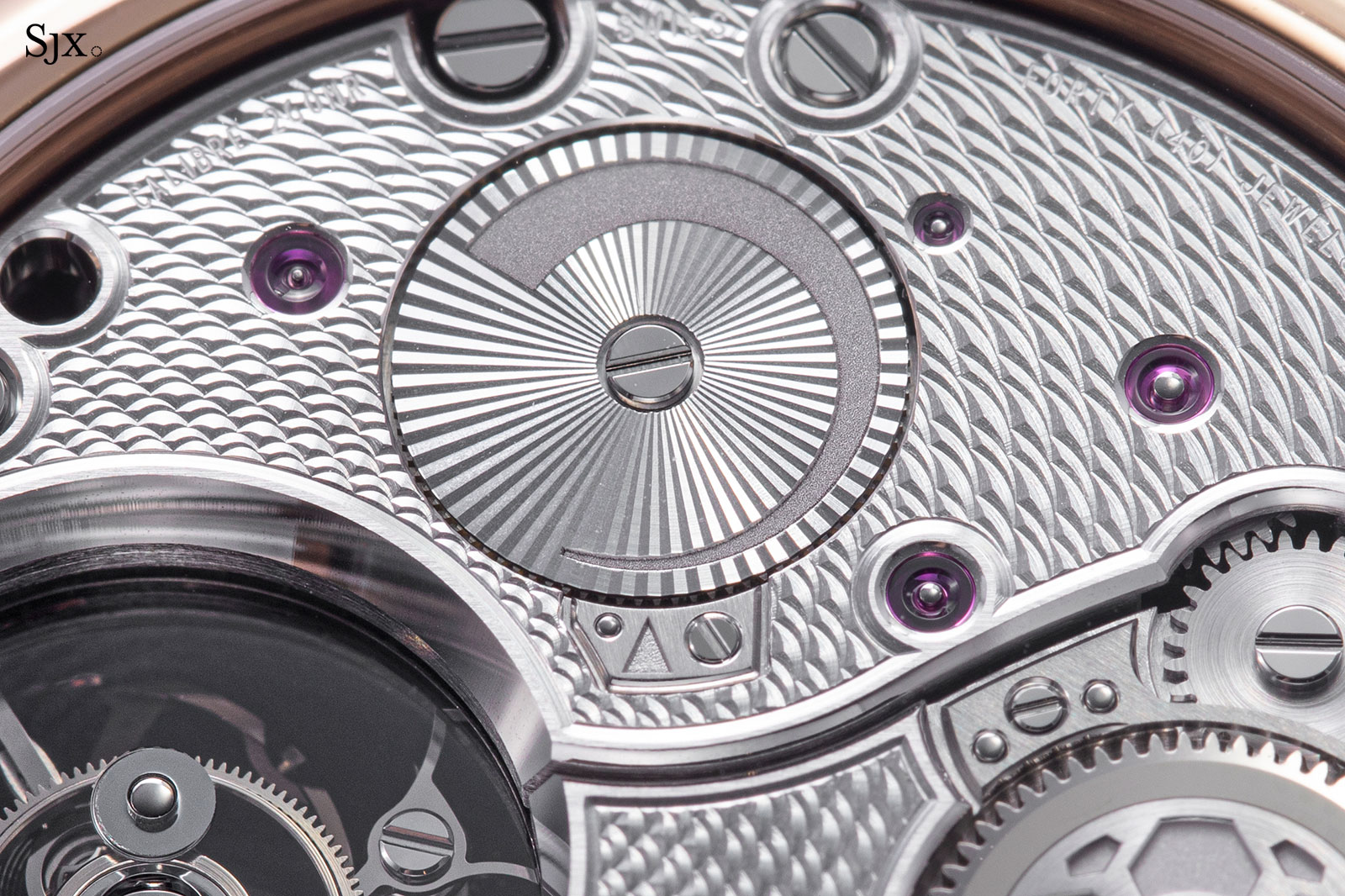 The disc that indicates the power reserve 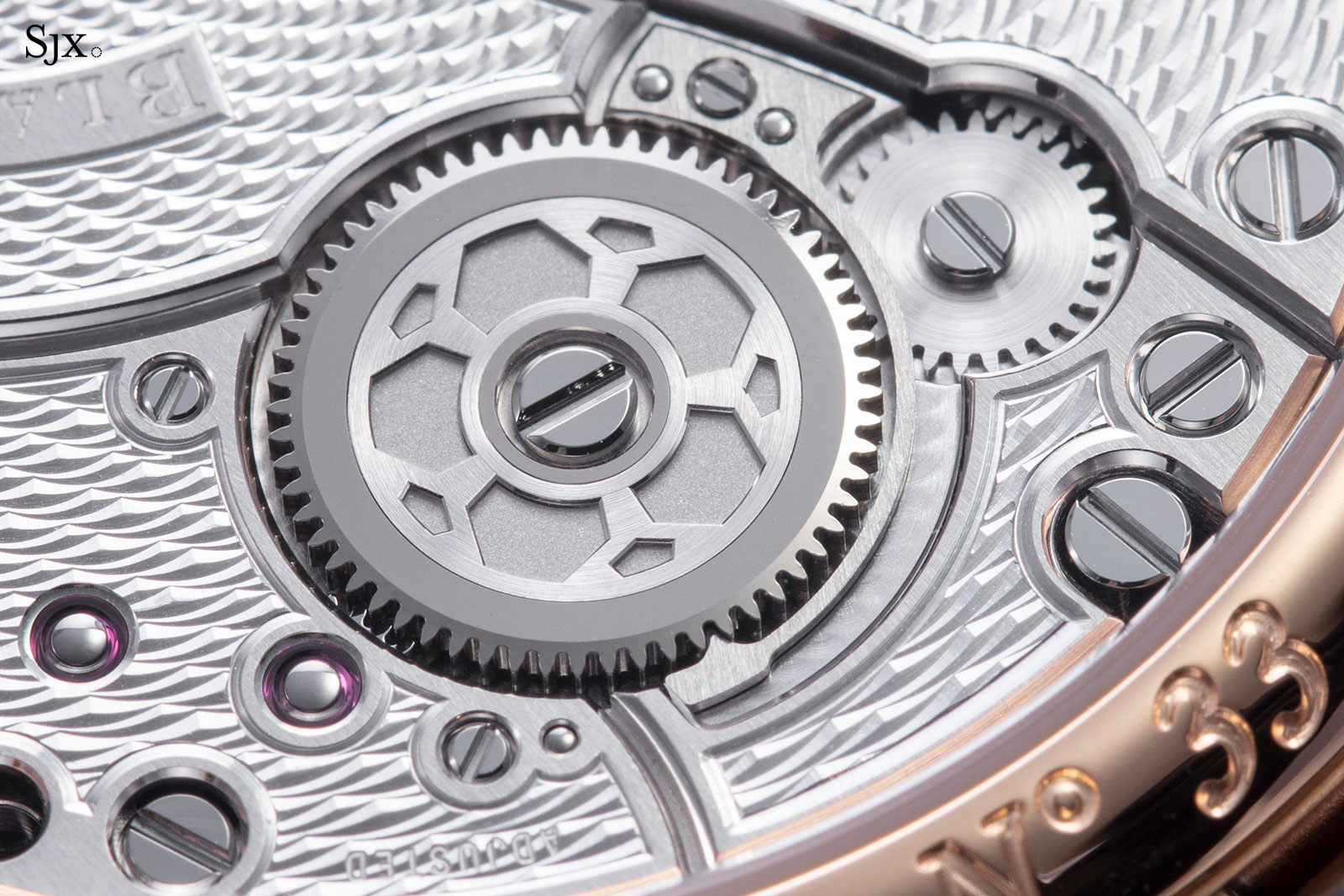 The large screw holding the barrel ratchet wheel has especially wide bevelling on its slot and circumference, but all the other screws do as well, though it is less prominent due to their smaller size 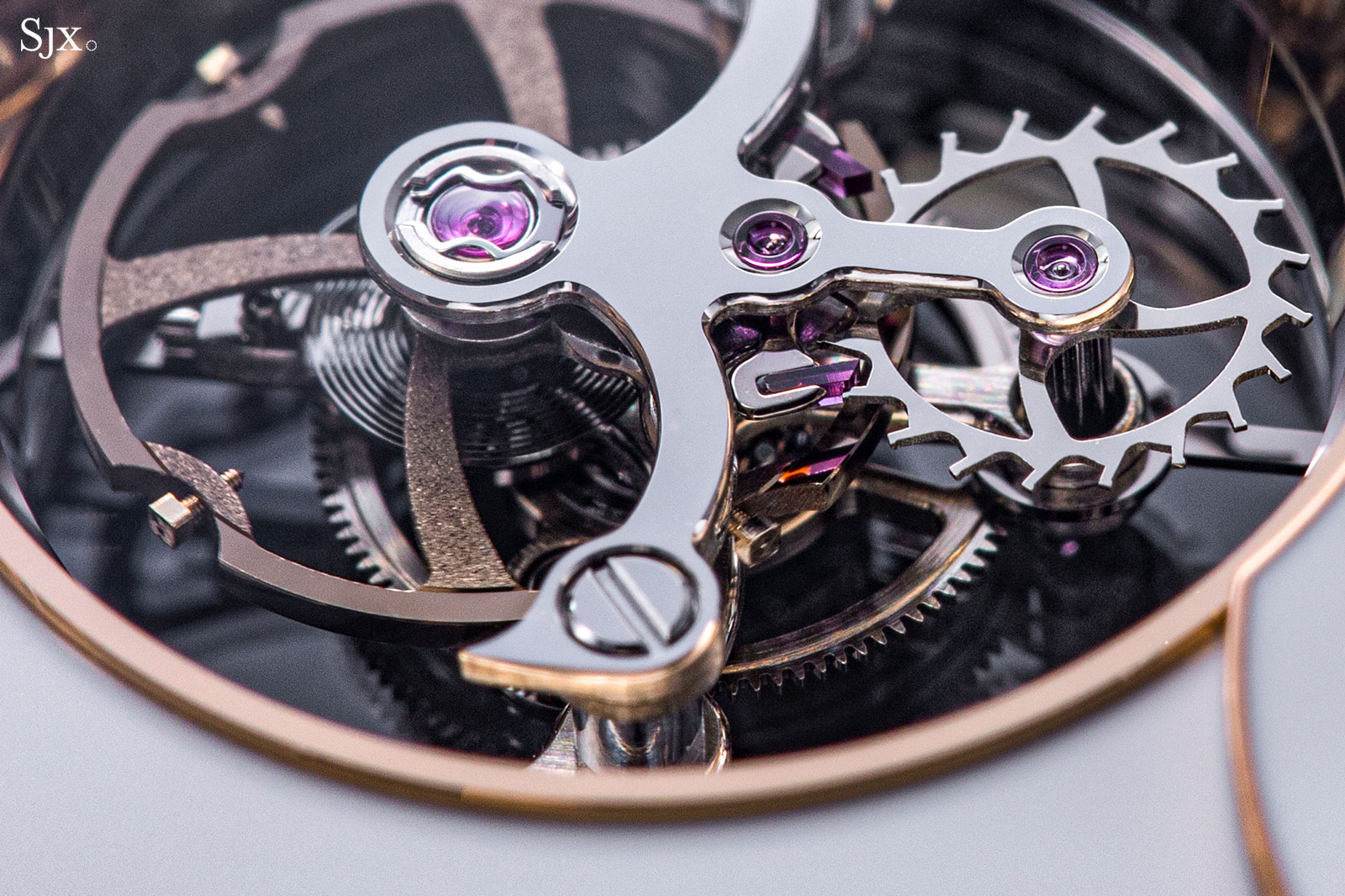 The tourbillon carriage is black polished and bevelled on its edges

While the effort and skill that went into the movement decoration is overwhelmingly obvious, it feels like too much. There is a lot going on and many of the elements don’t complement each other in terms of style. The honeycomb barrel ratchet wheel, for instance, is jarringly modern against all the old-school engine turning.

Even if the finishing were left unchanged, the movement could do with more colour, like blueing some screws or gilding the engraving. Already it is largely an unbroken expanse of metal because of the full bridges that cover most of the moving parts, so the lack of colour accentuates the monotony. 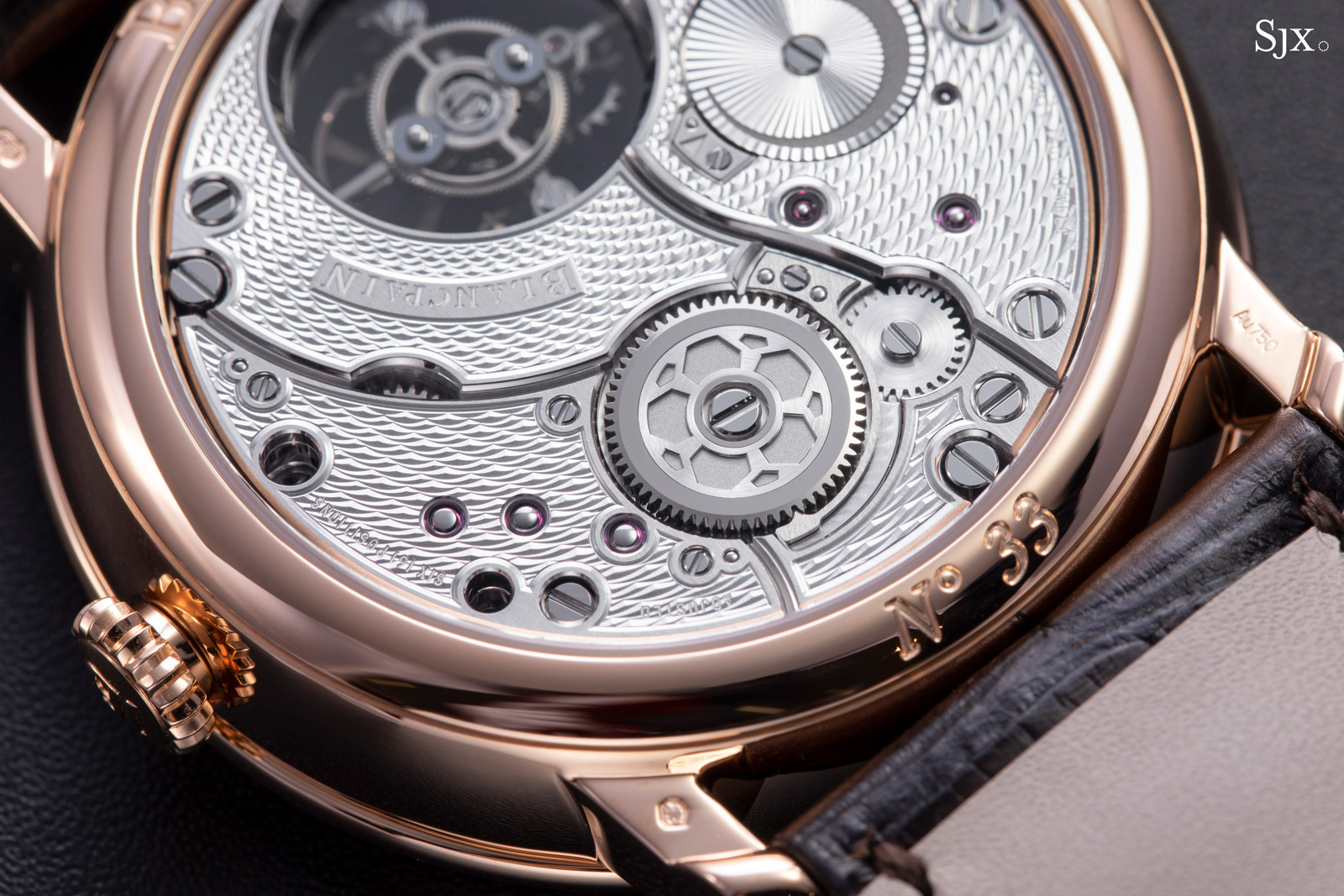 The THSMR combines the rare qualities of being visually appealing and technically accomplished. The styling is clean and classical but gently eccentric, and complements the compilations perfectly.

At the same time, the tangible quality of the watch is obvious. The dial and movement in particular are executed to a high standard; the movement is impressive and almost too fancily decorated. Put briefly, it is an elegantly interesting watch.

Limited edition: 50 pieces in platinum; regular production in red gold
Availability: At Blancpain boutiques and retailers
Price: US$148,800 in red gold, US$180,900 in platinum