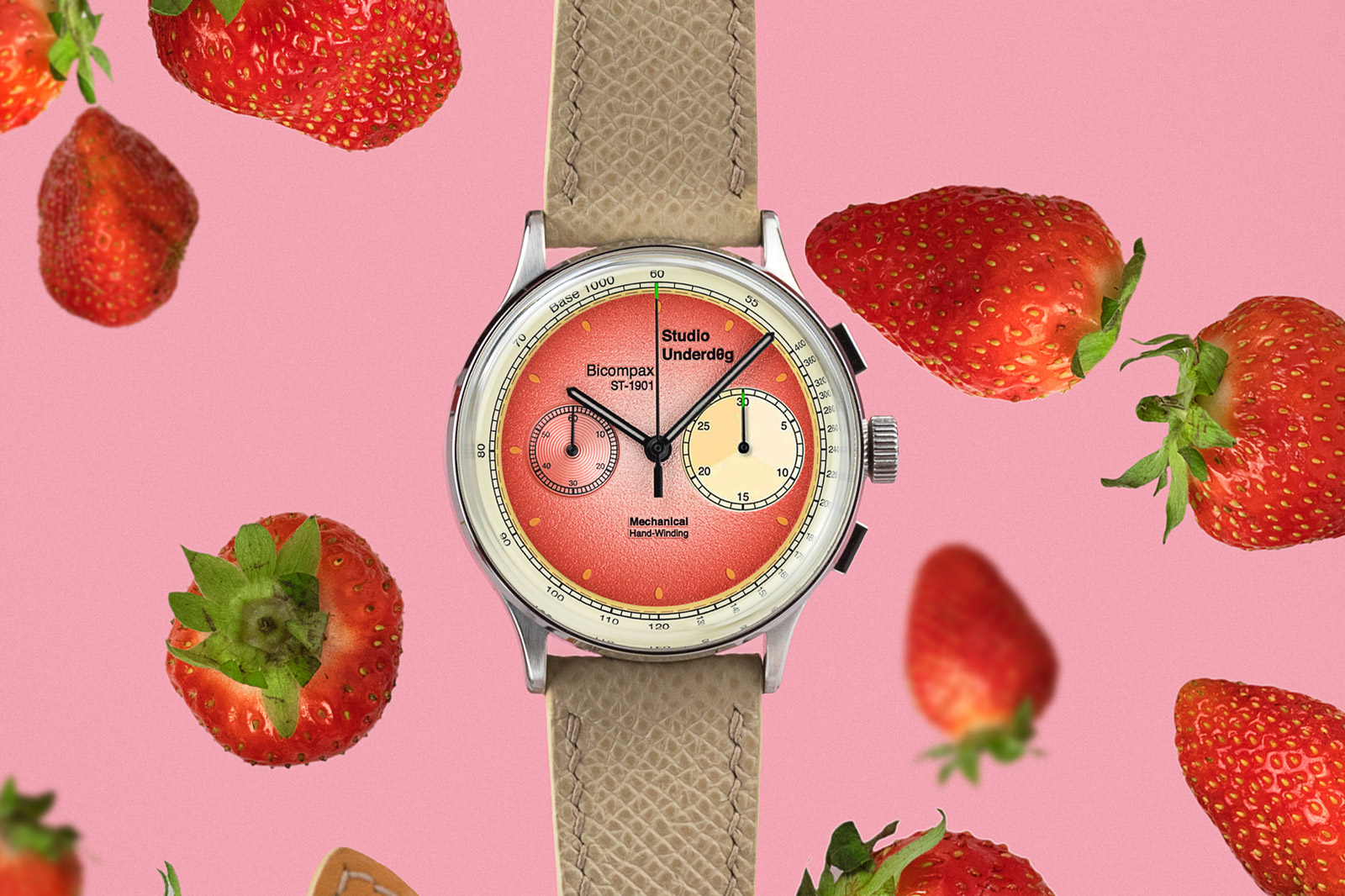 A watch designer by profession, Richard Benc started Studio Underd0g in early 2020 during the lockdown in London, having previously designed watches for Braun, the German consumer goods maker famed for its shavers and industrial design. His brand got its start with a series of affordable mechanical chronographs defined by a quirky aesthetic, including examples modelled on the colours of watermelon and mint-chocolate chip ice cream.

Now Studio Underd0g has taken the covers off its latest two-counter chronograph, Strawberries & Cream. Inspired by the colours of the eponymous desert, the watch was born from chance meeting from Miguel Seabra, a Portuguese journalist specialising in tennis and watches. A fan of Studio Underd0g from its inception, Mr Seabra and the brand’s founder shared a joke last year about the perfect dessert while watching tennis in summer, resulting in this edition. 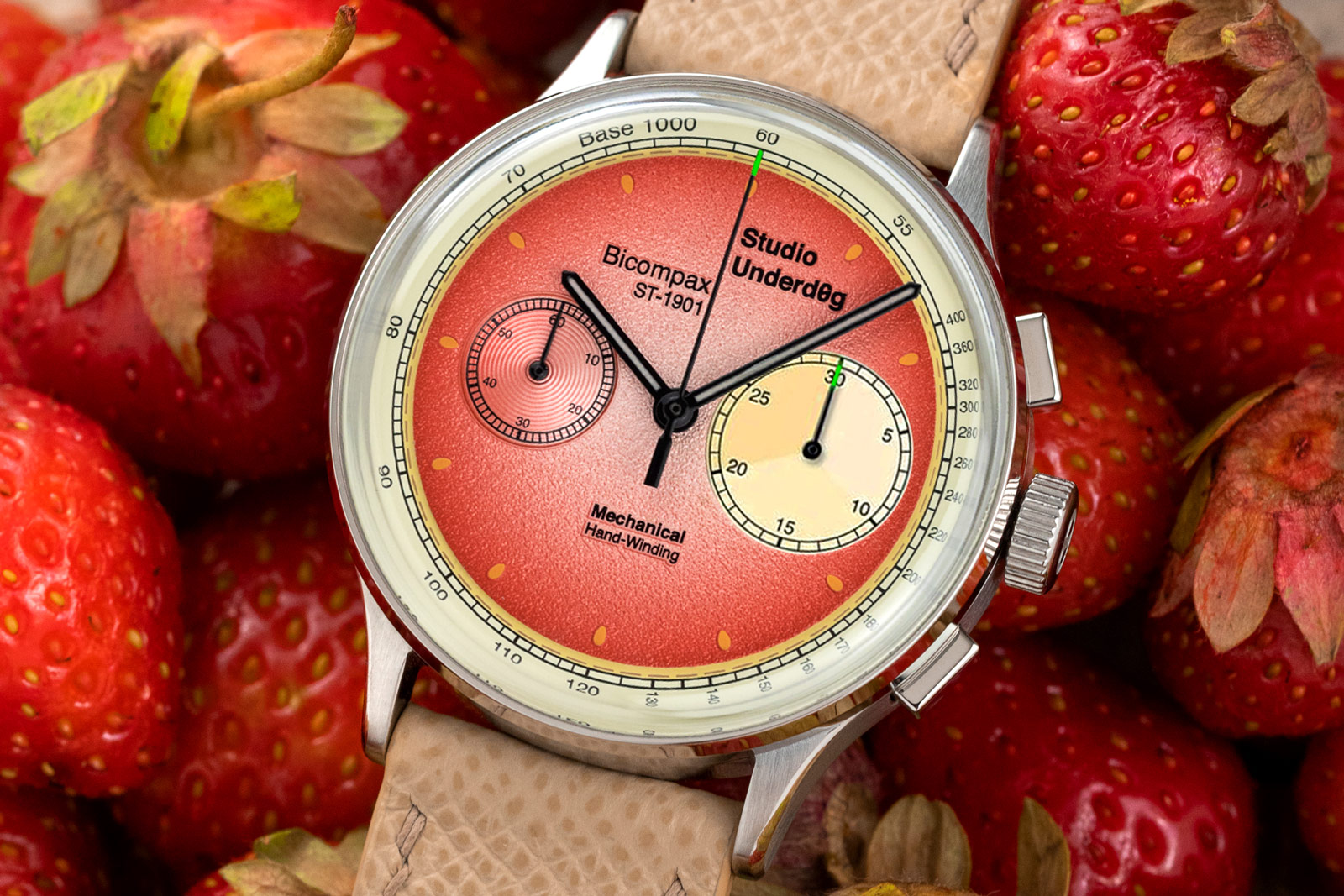 While salmon is a fad, mechanical watches for men in bright pink are uncommon, which immediately sets Strawberries & Cream apart from its competitors. Admittedly this not the first pink dial from Studio Underd0g – the first was the Watermelon watch in bright green and pink – but this is arguably the more appealing since the colours simple go better together while being more wearable. 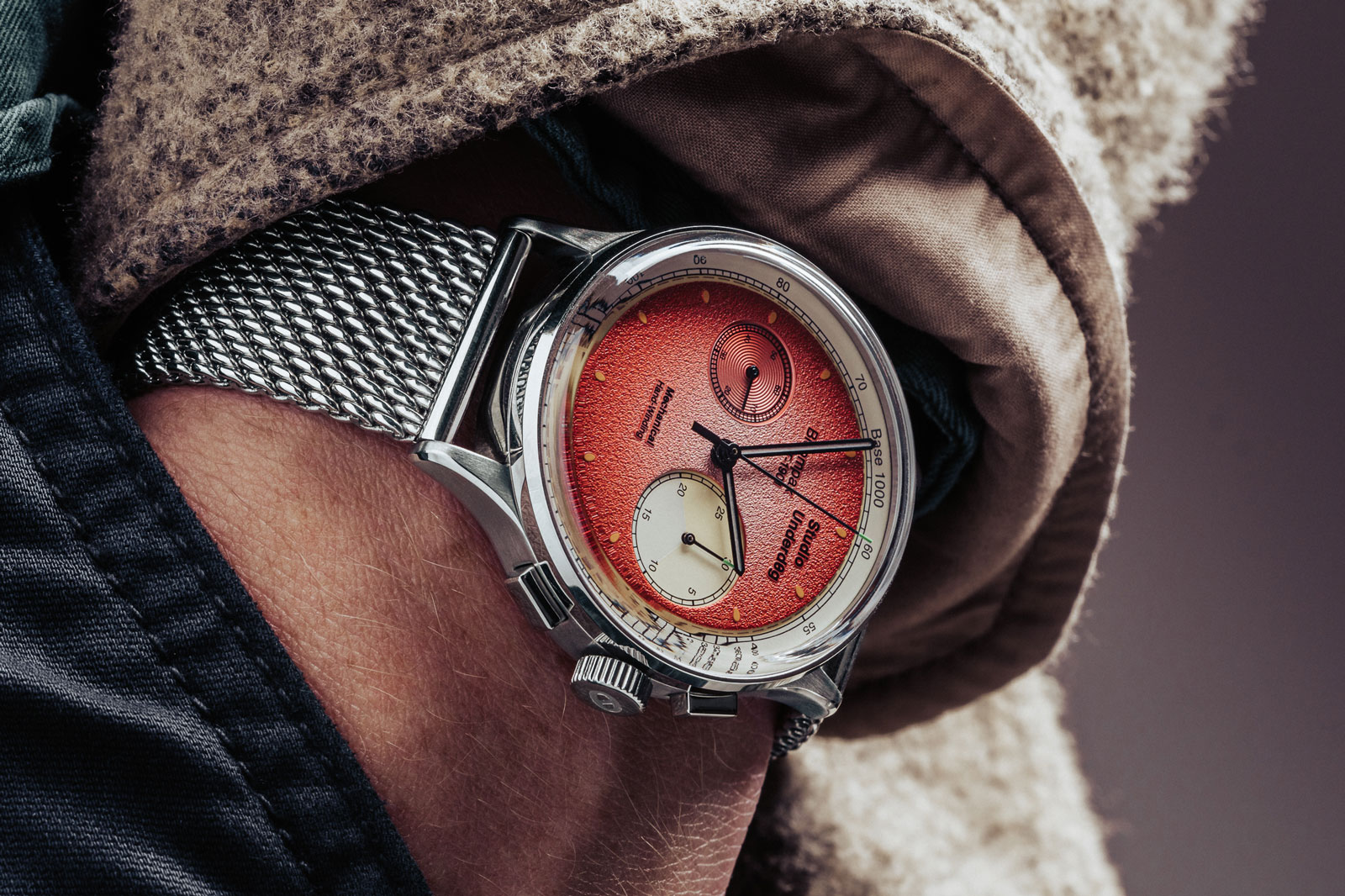 The price-to-quality ratio of the Strawberries & Cream is good. The watch gets most things right. Both the case and dial are basic but interesting nonetheless, while the movement is a gently decorated, hand-wind Seagull ST-1901 – low-cost but good looking for what it costs. Together they make for a watch that’s a pleasing proposition.

While the movement is a bona fide mechanical chronograph calibre with a column wheel, Strawberries & Cream is still very much a fun watch in both style and substance. It’s more of an occasion watch than an everyday “beater”. The good news is that it is priced appropriately, with an accessible price tag of US$675. 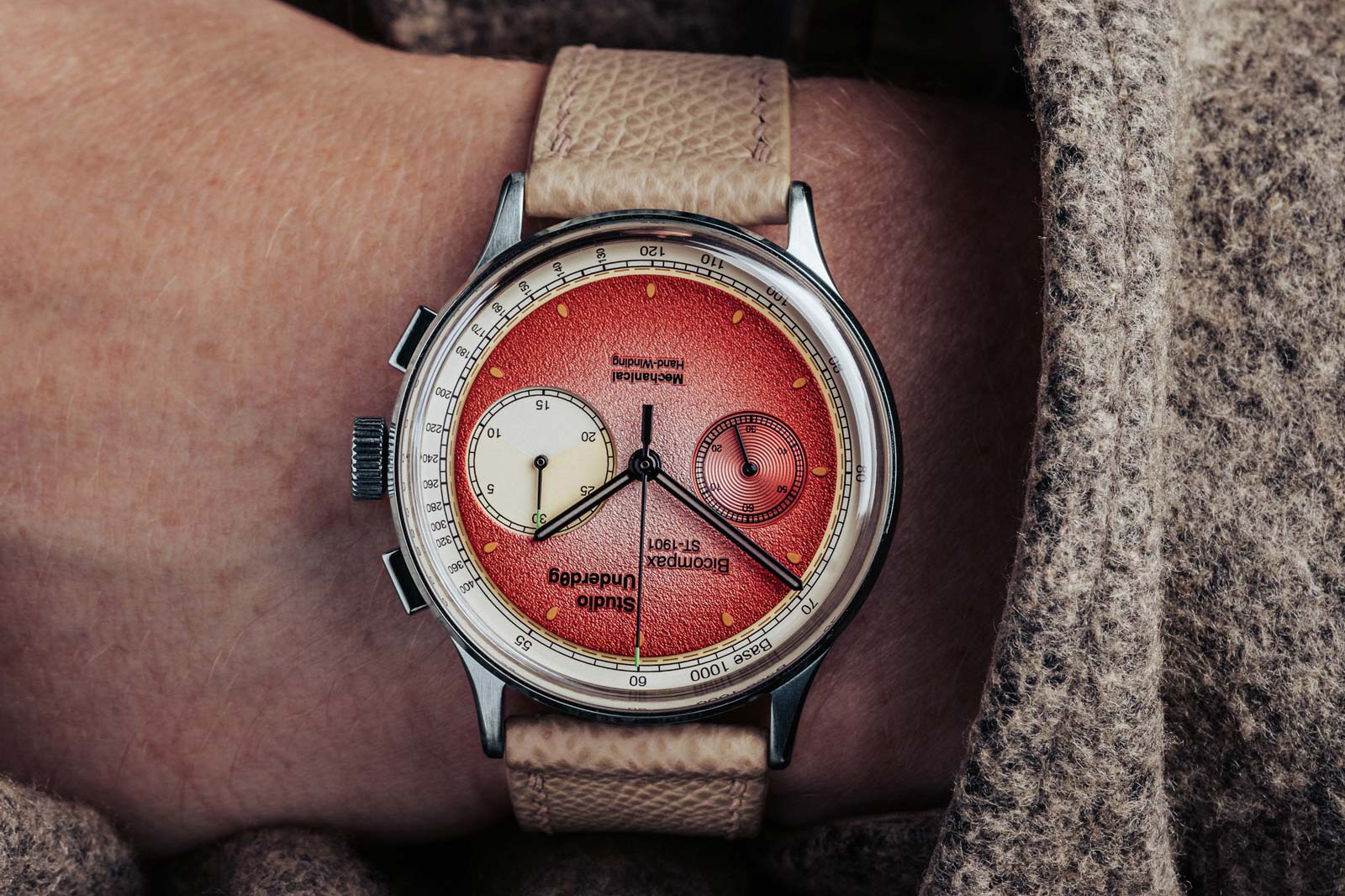 While colour might be unorthodox, Strawberries & Cream is pretty traditional in tangible terms. It’s traditionally sized at just 38.5 mm in diameter. The compact case gives the watch a more modest presence, which is useful given the loud colours of the dial.

The case reflects Mr Benc’s eye for detail, which is also obvious on the dial. The proportions of the dial are just right, which is a feat since the registers are asymmetrical while the text is off-centre. I like the contrast between the two registers – this is something of a “Big Eye” chronograph – and their relative sizes balance the rest of the elements on dial.

Notably, the dial is decorated enough that it looks like thought was put into it. Heavily textured with a smoked finish, the dial also has details such as sunken registers and relief text that contribute to the appeal. 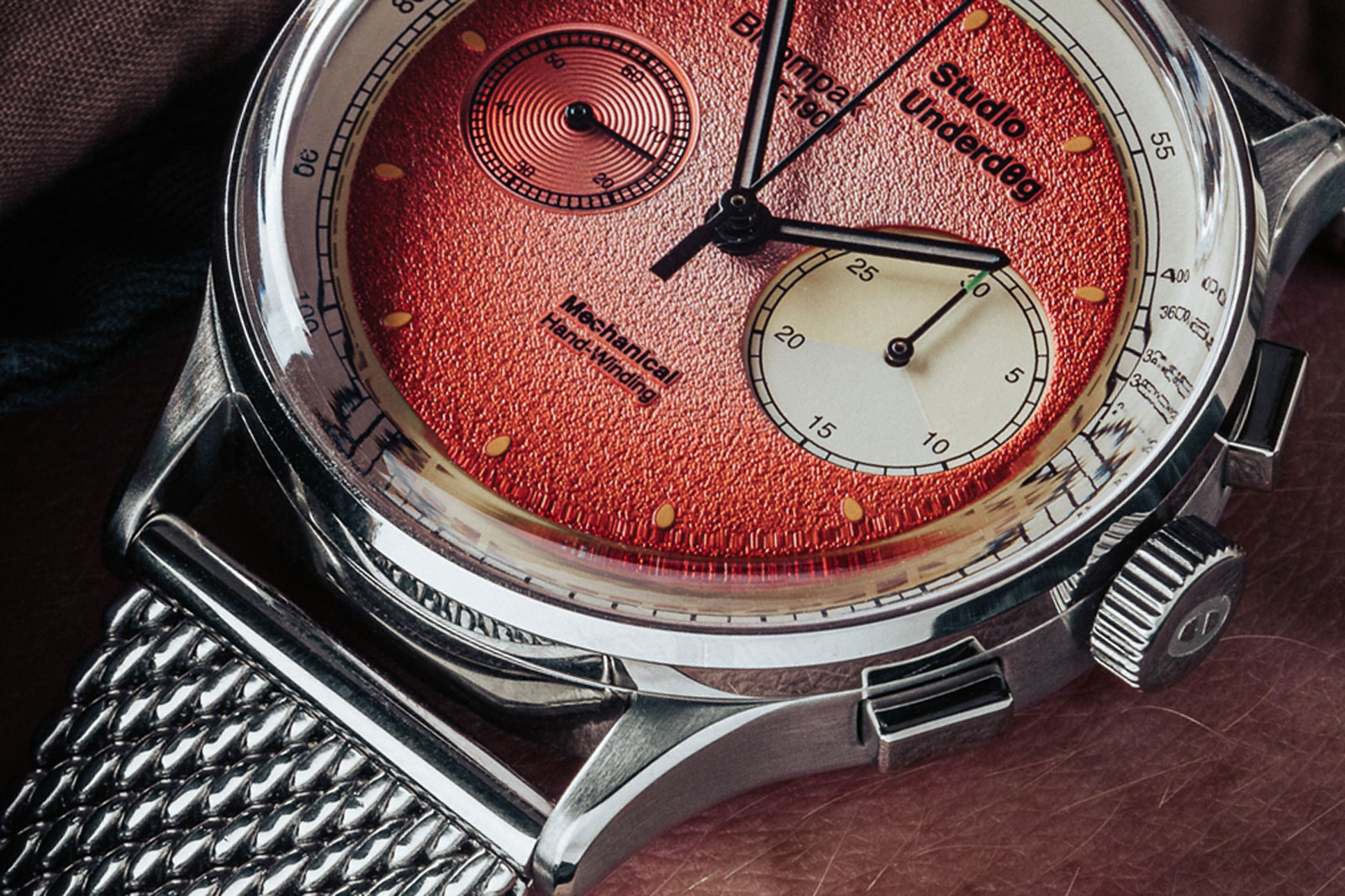 The domed sapphire crystal adds to the appeal

Inside the watch is the ST-1901, a hand-wind chronograph movement that’s essentially a clone of the Venus 175. Produced by Chinese watchmaker Seagull, the movement retails many appealing details of a classical chronograph movement – it is something of a replica after all – including a horizontal clutch and column wheel. Despite the simple decoration, the movement is attractive thanks to its traditional layout.

While the movement is made in China, the watch is assembled and tested in United Kingdom. It is accompanied by a two-year warranty offered in partnership with Horologium, a watch repair workshop 90 minutes from central London. 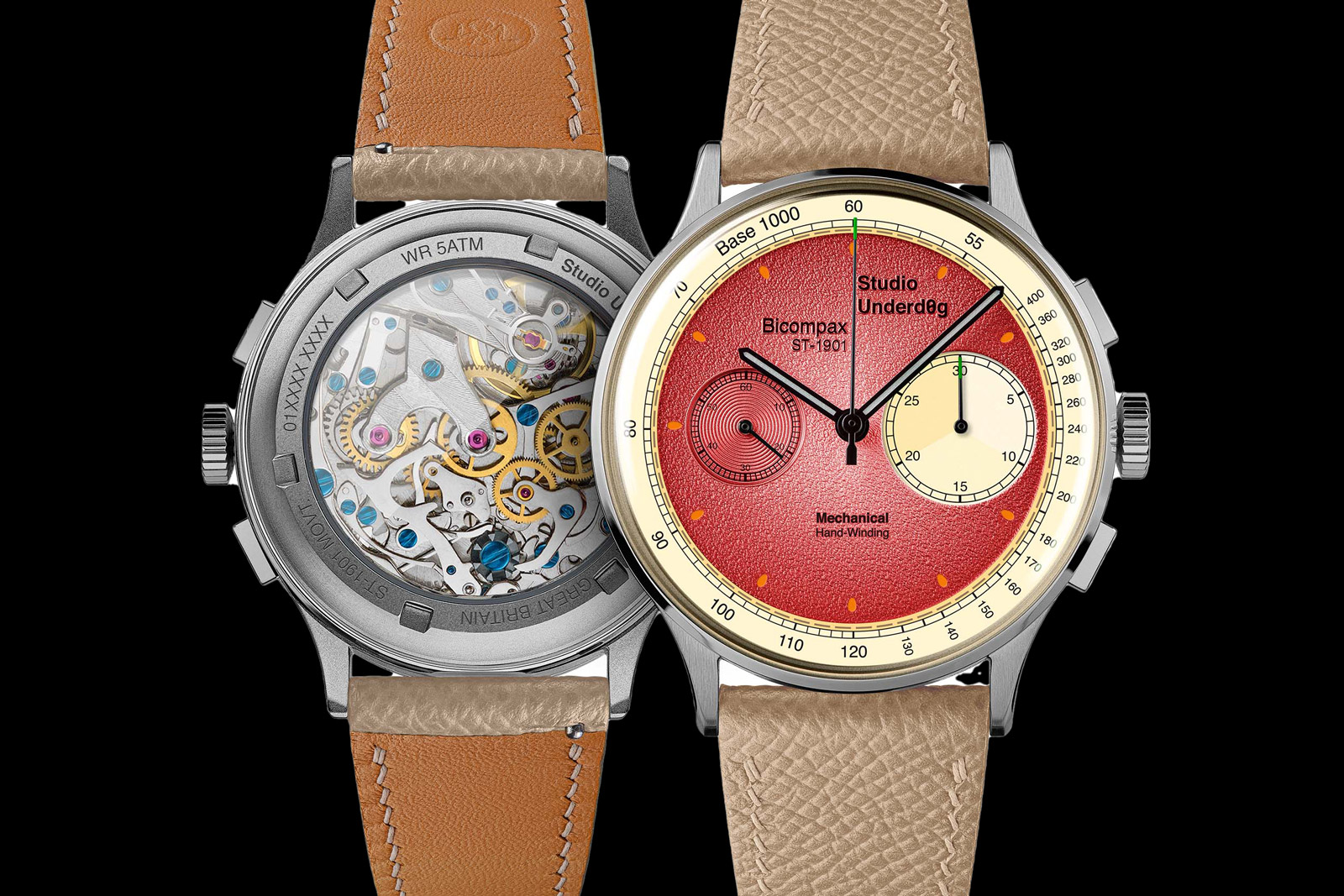 Limited edition: No, but only available during pre-order period ending August 16, 2022
Availability: Direct from Studio Underd0g with delivery in December 2022
Price: US$675