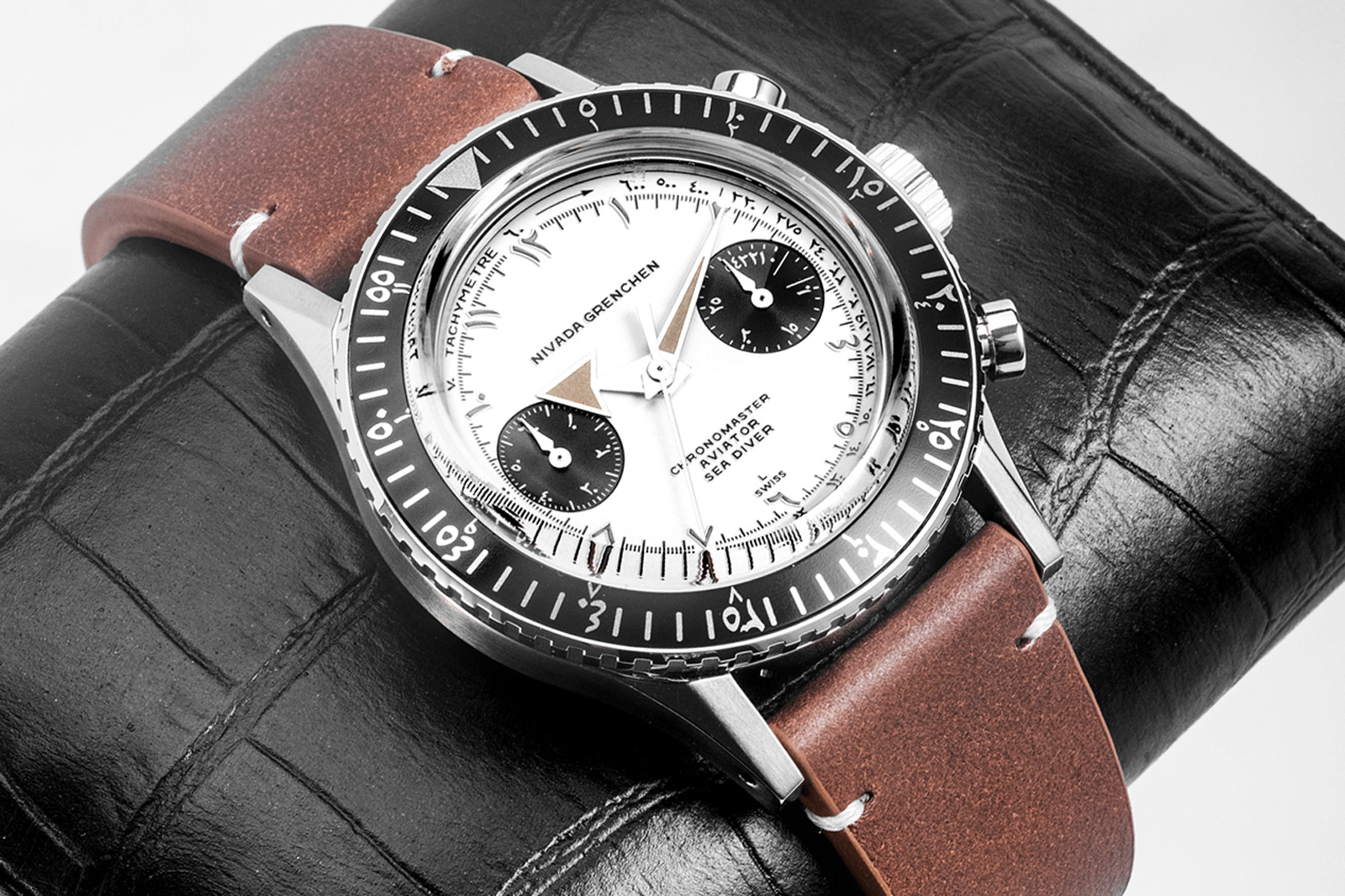 The brand’s signature product is a 38 mm hand-wind chronograph modelled on a 1960s original, which now gets an Eastern Arabic makeover with the Chronomaster “Perpétuel” Limited Edition Set. Made for the eponymous Dubai watch store, the watch is packaged in a box that includes a leather watch case and Chronomaster Only, a reference book detailing the history of Nivada. 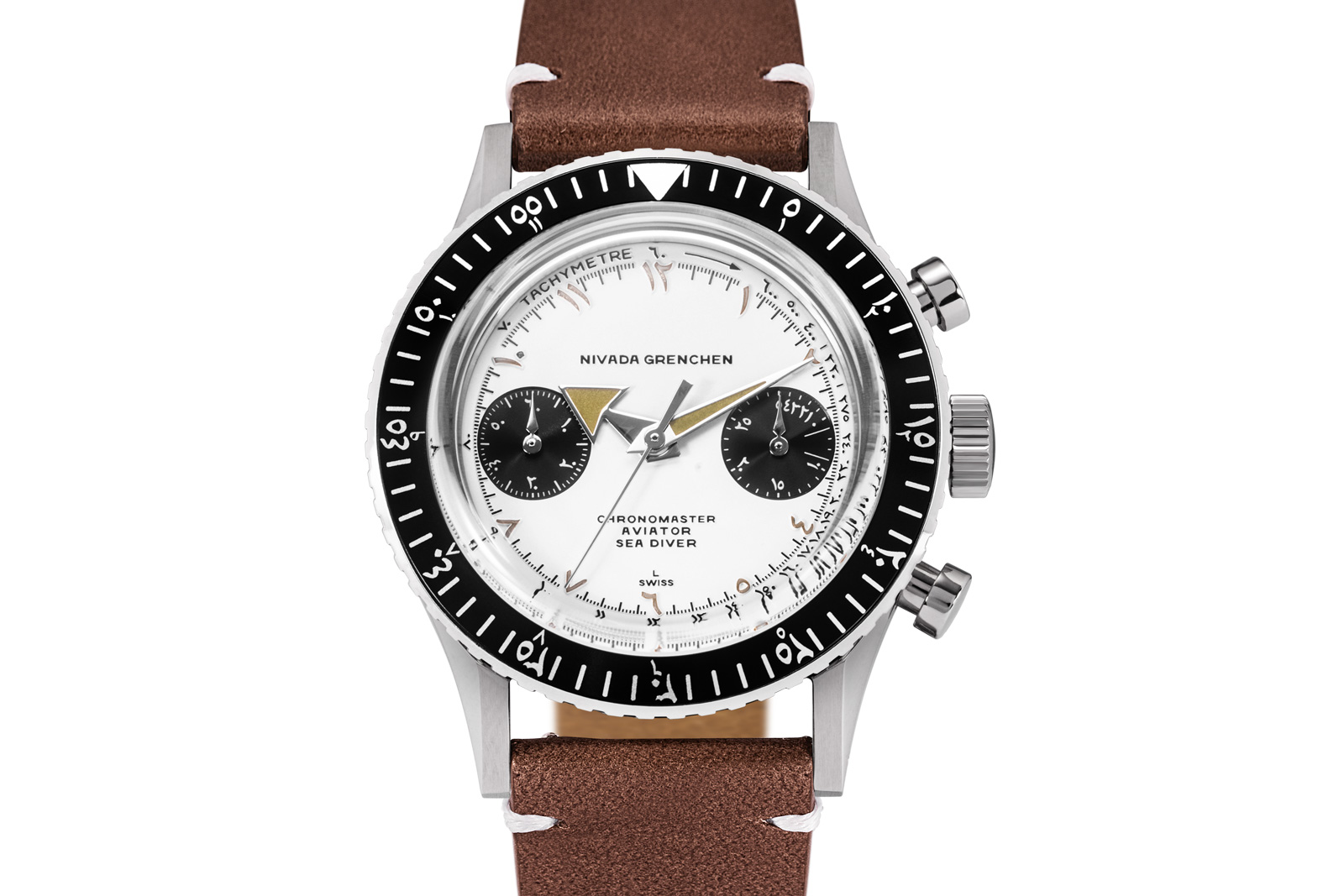 If you like vintage-style chronographs, Chronomaster is an appealing proposition in its original form, thanks to the restrained case size that’s identical to the vintage original. And the Sellita movement inside means the Chonomaster is an affordable entry into the world of retro, hand-wind chronographs, which is admittedly crowded with many, many comparable options.

But this version is slightly different. Typical of Perpétuel editions – and reflecting the store’s regional focus – the Chronomaster gets Eastern Arabic numerals for he dial and bezel.

Though such numerals have become relatively common and predictable on Middle East editions, this is noteworthy for two reasons. One is the fact that all the numerals on the front are in Eastern Arabic script, from the hour markers to the tachymeter scale, and even on the countdown bezel. 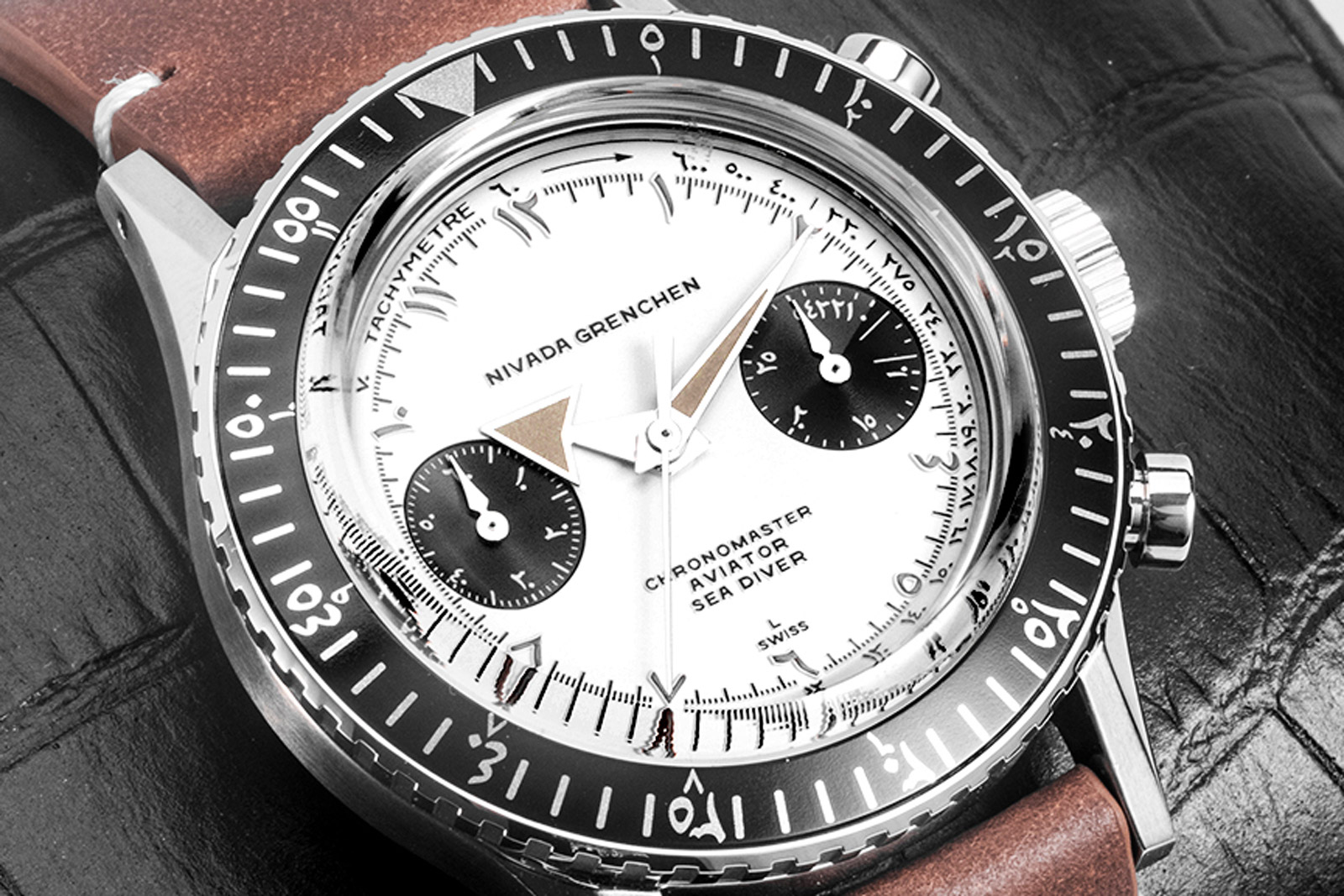 Still, the numerals are subtle enough that they recede into the background of the relatively complex chronograph dial, making them apparent only up close or to a discerning eye. It would be difficult for the uninitiated to distinguish this from the standard model from across a room.

The discreet and elegant numerals, however, comes at the price of US$3,550, which is almost twice as much as the regular-production model. As the base model is affordable to begin with, the 50-piece limited edition set isn’t too much of a stretch.

Nivada Grenchen was founded in 1926 – in the town of Grenchen naturally – and went out of business about half a century later in the 1970s. A standout amongst the brand’s past offerings is the Chronomaster launched in 1963, the same year the Rolex Daytona was introduced. The Chronomaster was an all-in-one sports watch that included not only a chronograph but also a rotating bezel as well as generous water resistance of 200 m.

The modern day Chronomaster is a faithful reissue of the original, retaining not only a similar case design but also the compact size. Both the remake and original are about 38 mm wide by 14 mm tall. While the thickness is substantial, the remake is one of the smallest hand-wind chronographs on the market, making it unique amongst remakes. And the size also explains the balanced proportions of the dial in terms of the position of the chronograph registers. 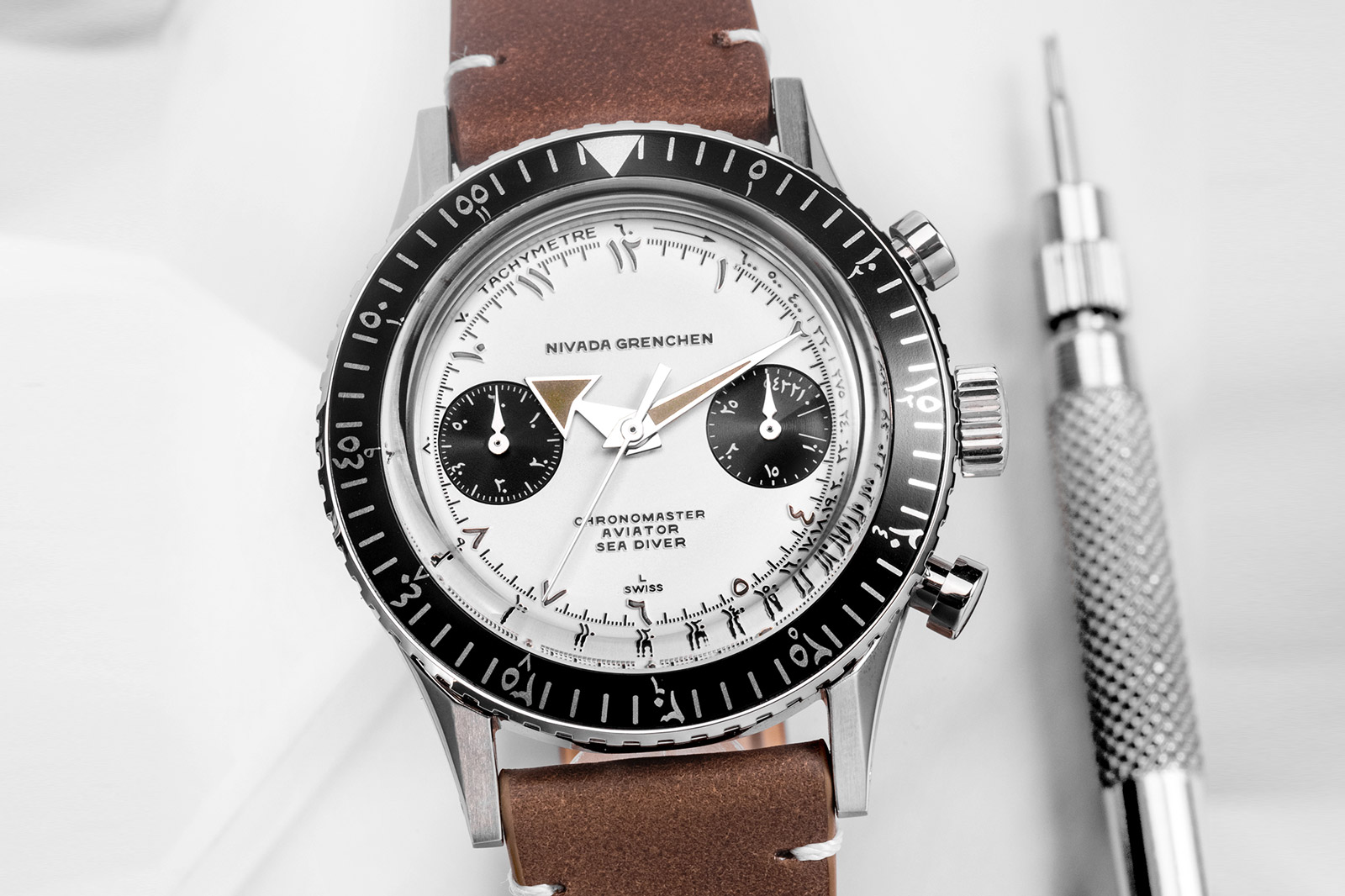 Unlike past Perpétuel editions that underwent major tweaks, the new Chronomaster doesn’t alter the colours of the standard model and sticks to the tried-and-true “panda” combination of black and white. The traditional palette might be a letdown for some since earlier Perpétuel editions excelled in their vintage-inspired but contemporary colourways.

Instead, the Perpétuel touches are focused entirely on typography: all the standard Arabic numerals have been replaced with Eastern Arabic numbers. The graceful calligraphy works surprisingly well with the simple, stark dial, avoiding the pitfall of excessive design, which would have been easy given the already complex dial. 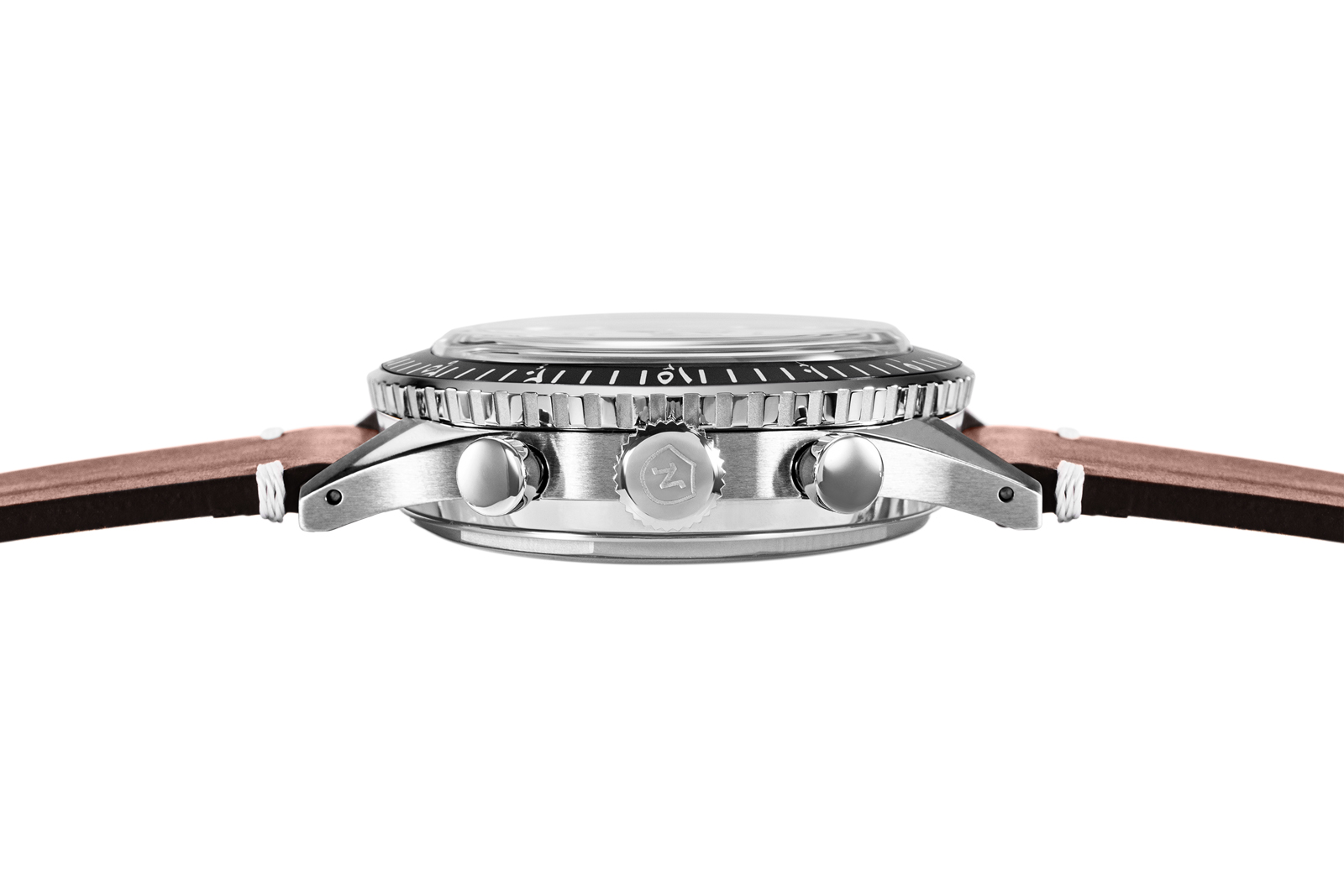