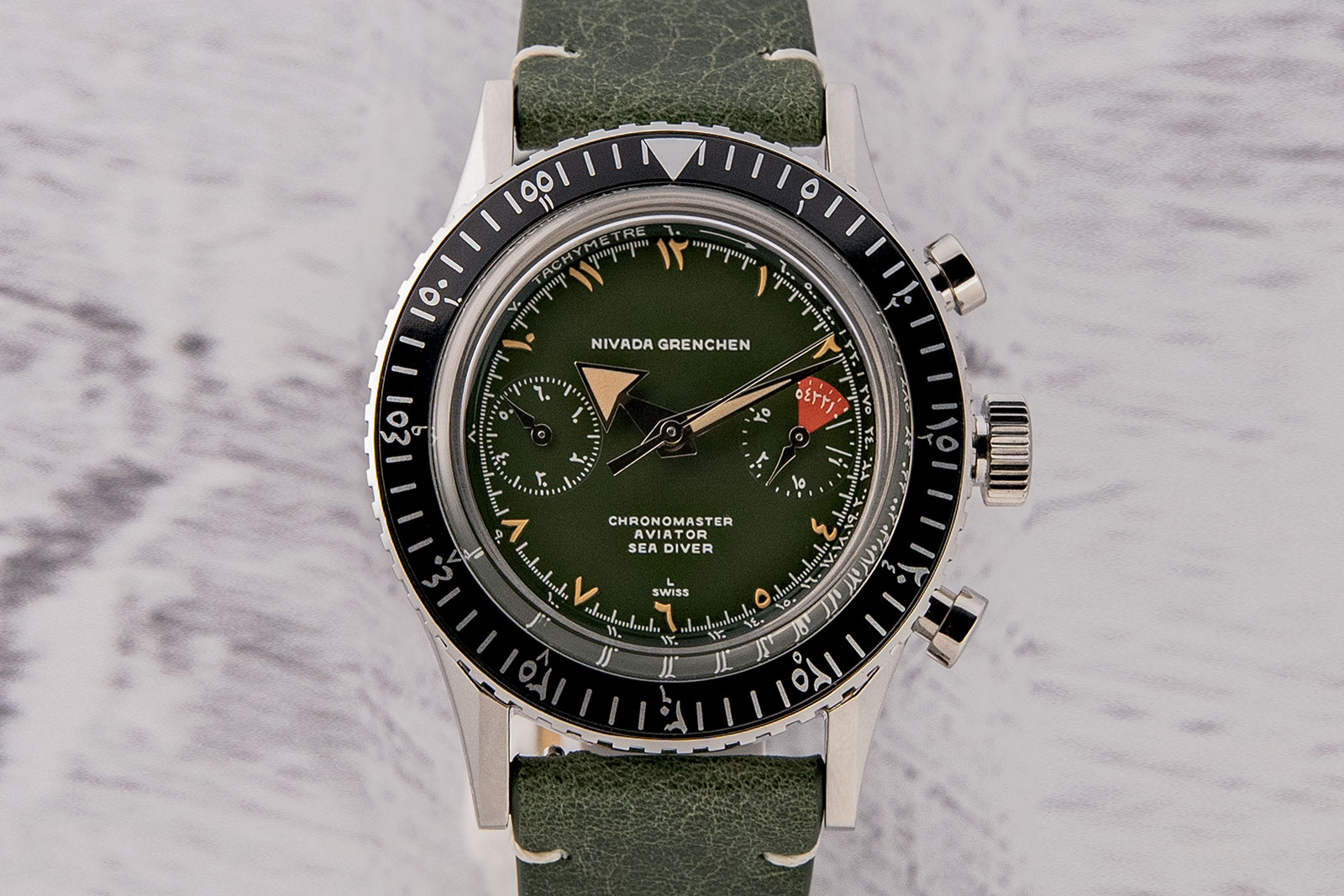 Having launched a “panda” version earlier this year, Nivada Grenchen has unveiled another customised chronograph for its Dubai retailer. Clad in a striking olive-green, the Chronomaster Automatic “Perpétuel” Second Edition once again features Eastern Arabic numerals on the dial and bezel.

While the Second Edition is a repetition of the first in a different colour, it is undoubtedly more striking. Olive green is a fashionable colour today but it works well with the faux-vintage lume and retro style of the watch. More broadly, the vintage-inspired design also suits the calligraphic style of the Eastern Arabic numerals. 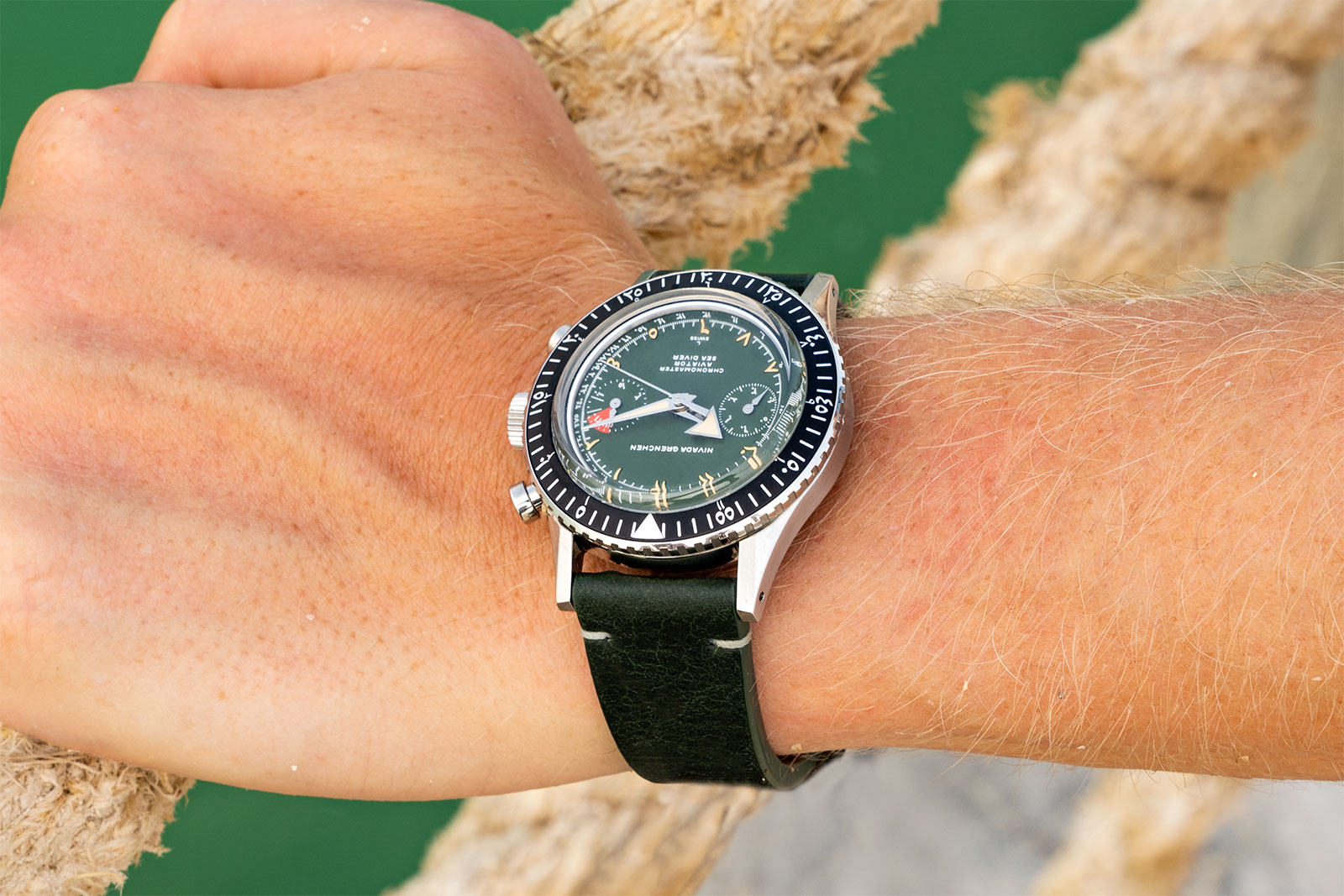 Like the first edition, the new model costs almost double the standard Chronomaster. It’s a steep premium for a new dial, but the Eastern-Arabic numerals have a unique appeal, particularly in the Middle East.

The only downside to the Second Edition is arguably the fact that it came second – some who bought the “panda” without knowing this was in the pipeline might have wanted to wait for this one instead.

The Second Edition is based on the Chronomaster Automatic, a sports chronograph produced by Nivada in the 1960s. Conceived as a multi-purpose chronograph for both divers and aviators, the Chronomaster is rated to 200 m but also has a countdown bezel and tachymeter scale – this also explains the text above six o’clock.

Besides the olive green dial, the key feature of the Chronomaster Perpétuel are the Eastern-Arabic numerals. As with most of Perpétuel’s limited editions, the new Chronomaster has all of the numerals on the face in Eastern Arabic script – even on the tachymeter scale and bezel – resulting in a pleasing uniformity. 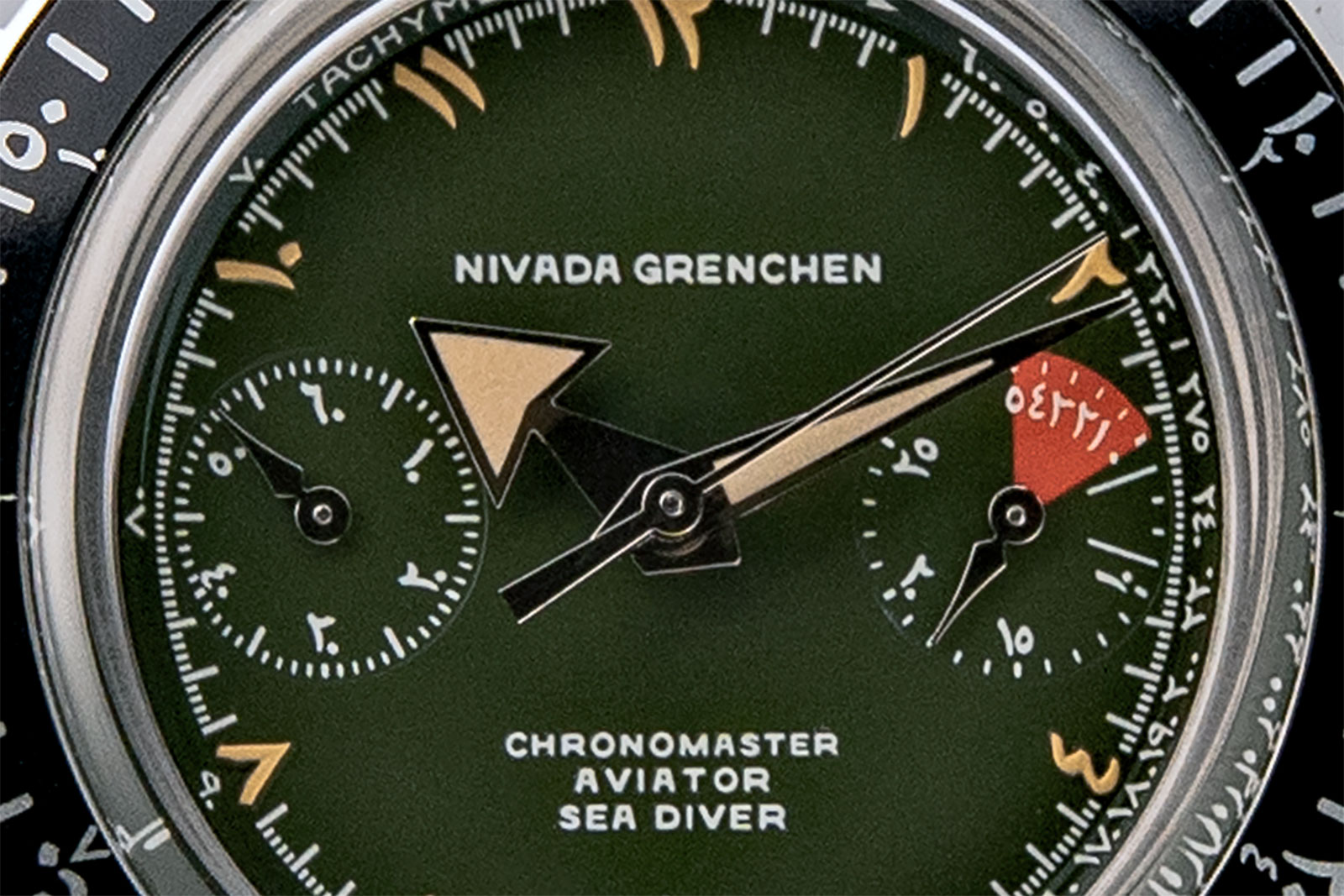 Notably, the modern-day Chronomaster is sized similarly to the vintage original at 38 mm by 14 mm. As such, it ranks amongst the most compact for vintage-remake chronographs. The relatively small case size also means the chronograph registers are positioned away from the central axis of the dial, giving the dial vintage-like proportions.

Inside the case is a SW510, which is a manually-wound version of Sellita’s Valjoux 7750 clone. Having been upgraded by Sellita over the years, the calibre has a 63-hour power reserve, instead of the 45 hours or so of the original generation. 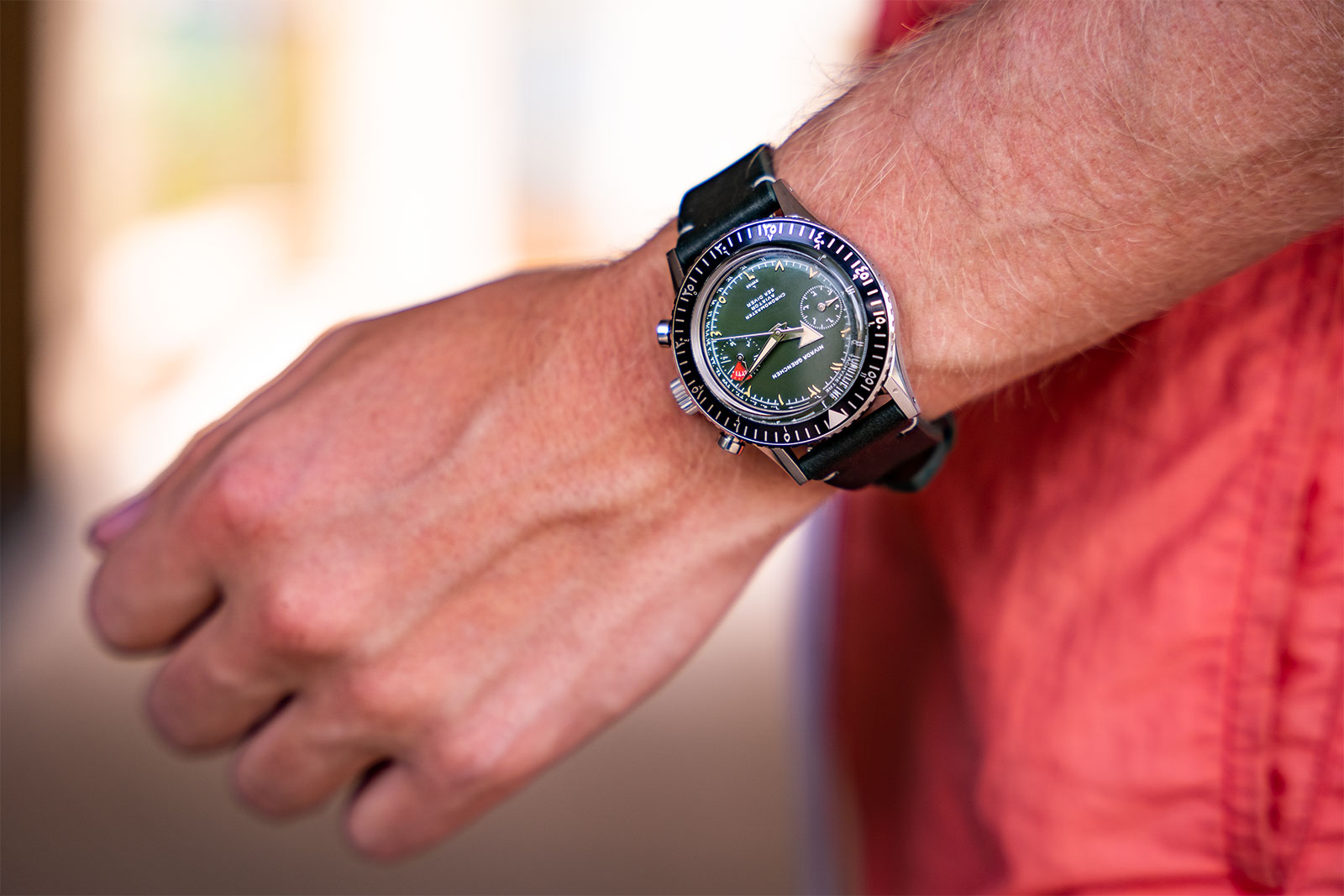 As with the first run, the Second Edition is delivered in a box that also contains a leather watch pouch and Chronomaster Only, a reference book covering the history of Nivada. 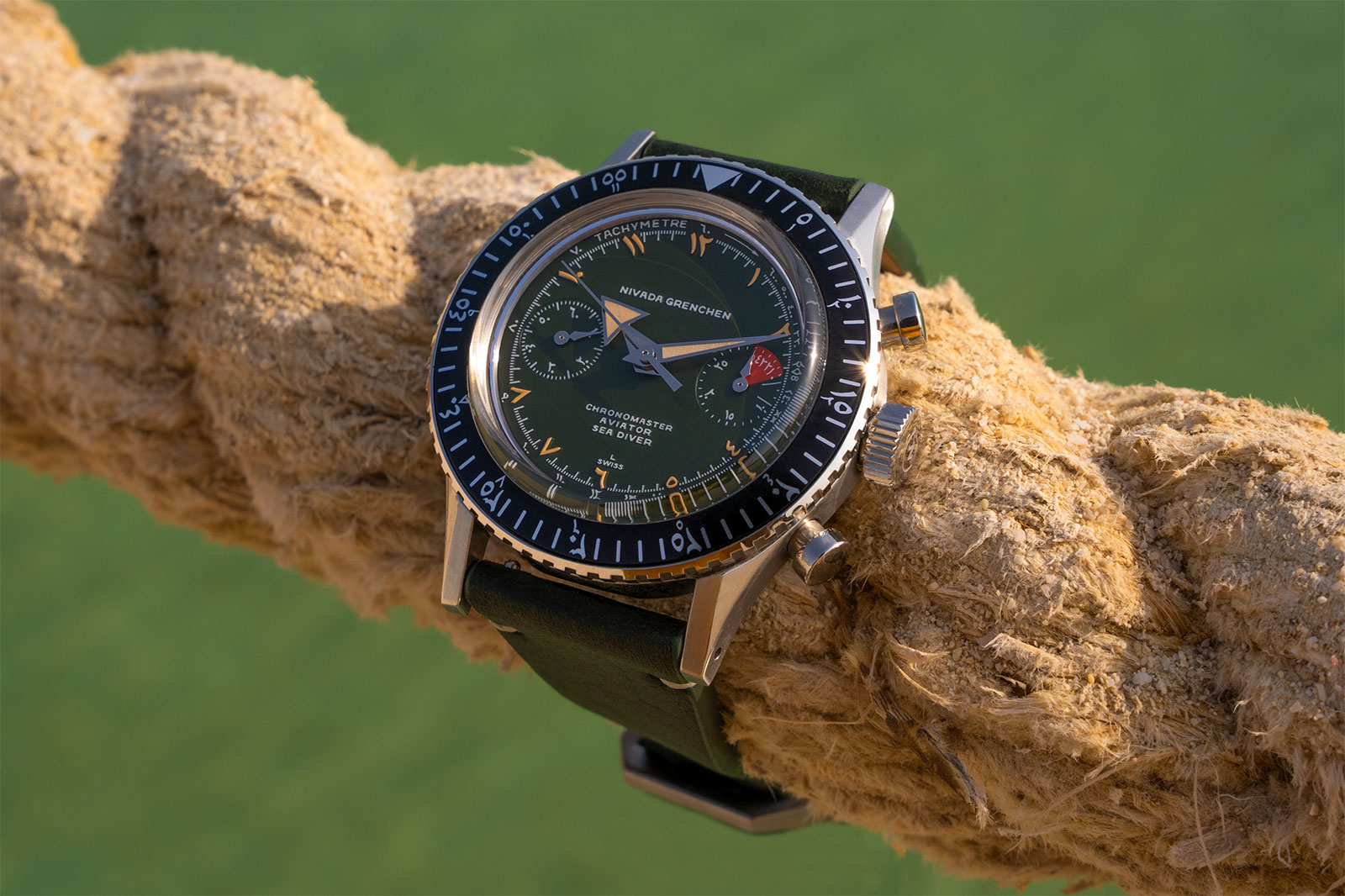