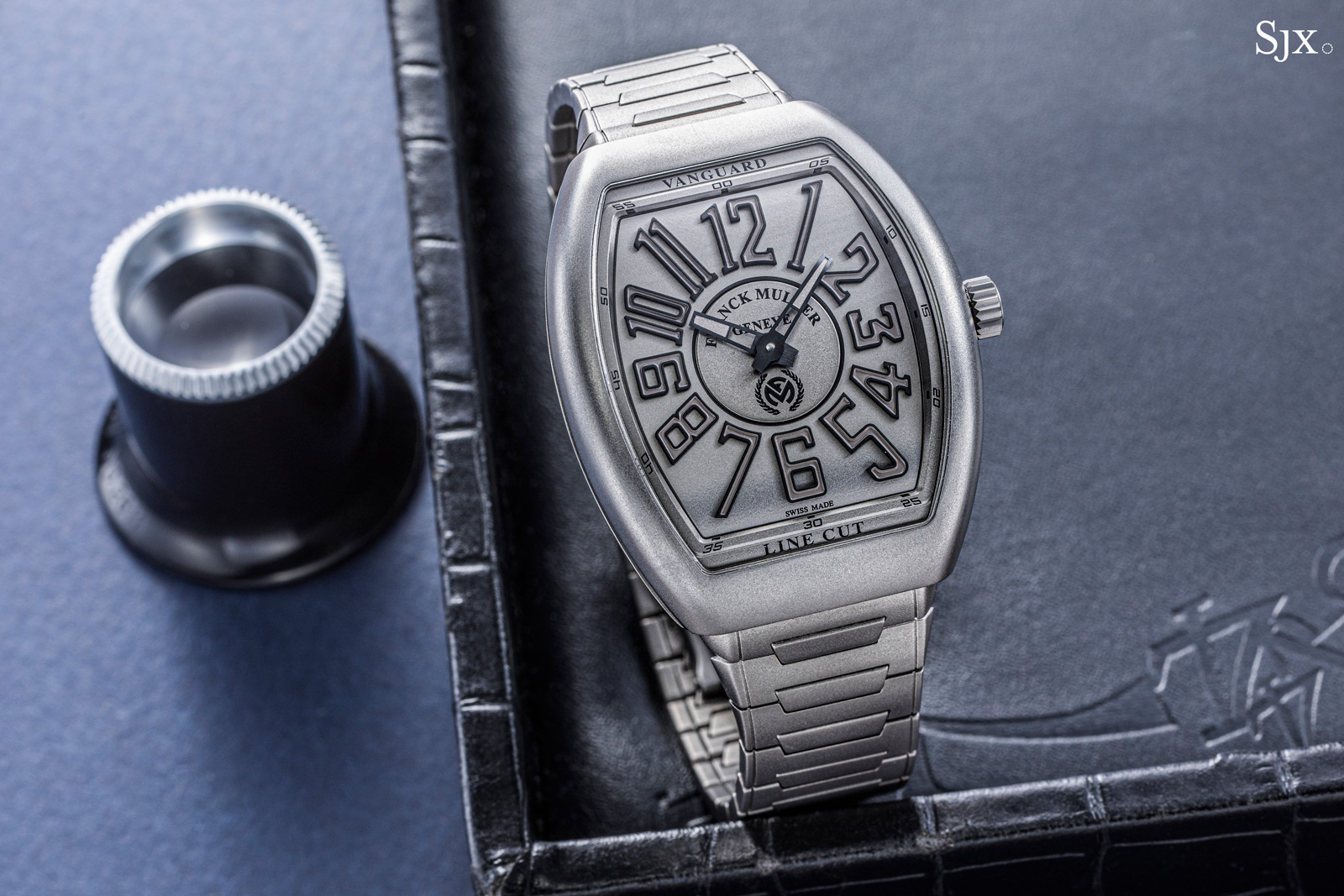 First announced two years ago as an exclusive for its retailers in France, the Vanguard Line Cut is strikingly different from the usual Franck Muller offering. Having just two hands and sandblasted titanium all round, the Line Cut is monochromatic, sleek, and thin, while also being as minimalist as a Franck Muller can be.

Better known for its big watches in over-the-top styles, Franck Muller did something different with the Vanguard Line Cut. It’s essentially a flatter, sleeker version of its Vanguard. 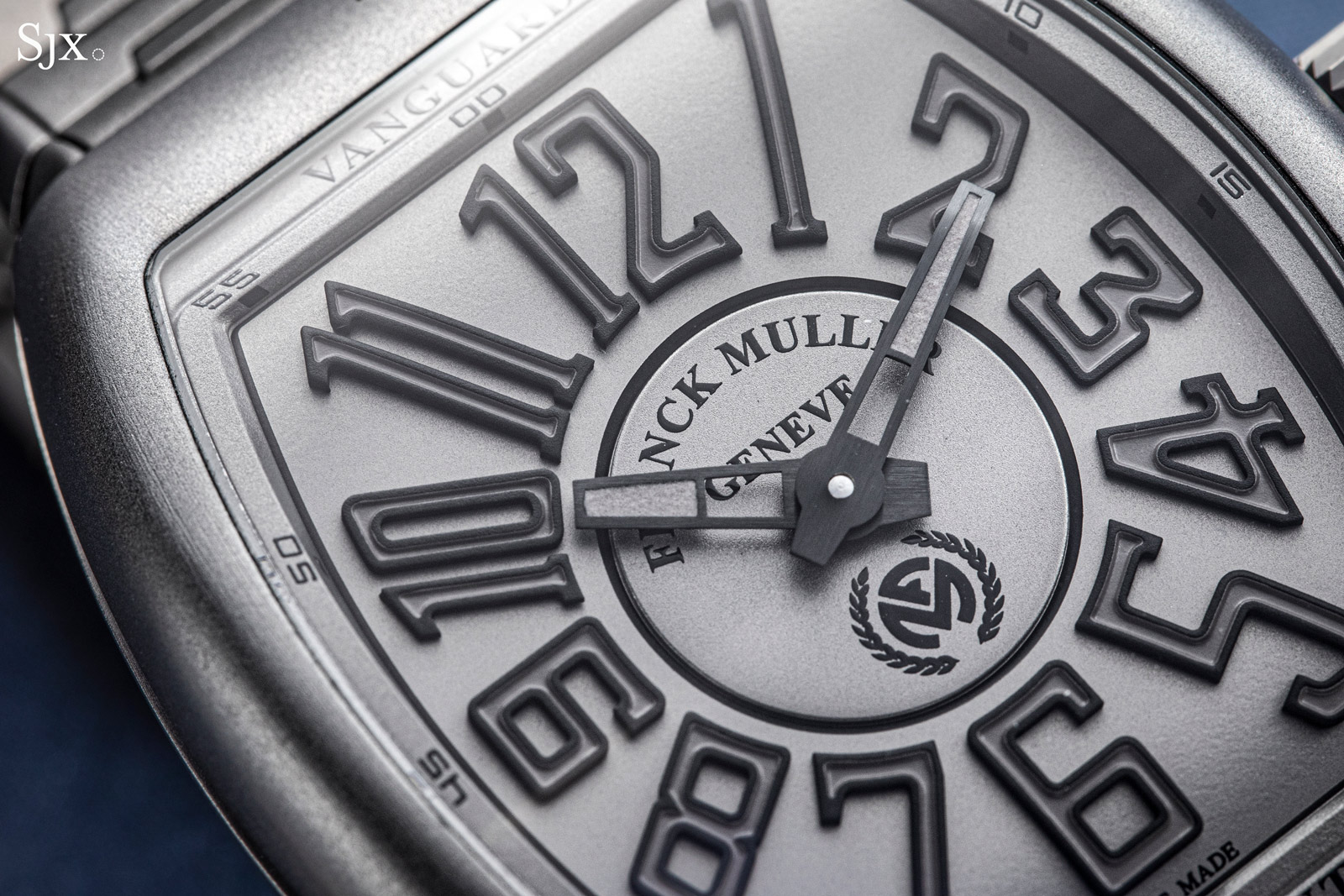 But the Line Cut is more than a nip and tuck. The tactile feel of the Line Cut is surprising in the hand and on the wrist. It feels different from the typical Franck Muller, being lighter, slimmer, and restrained. And like all tonneau-shaped Franck Muller watches, the case is slightly curved so it hugs the wrist.

Unlike most other watches in this segment that emphasise angles and straight lines, like the Bulgari Octo Finissimo for instance, the Line Cut is all about rounded corners and soft edges, so it wears quite comfortably. 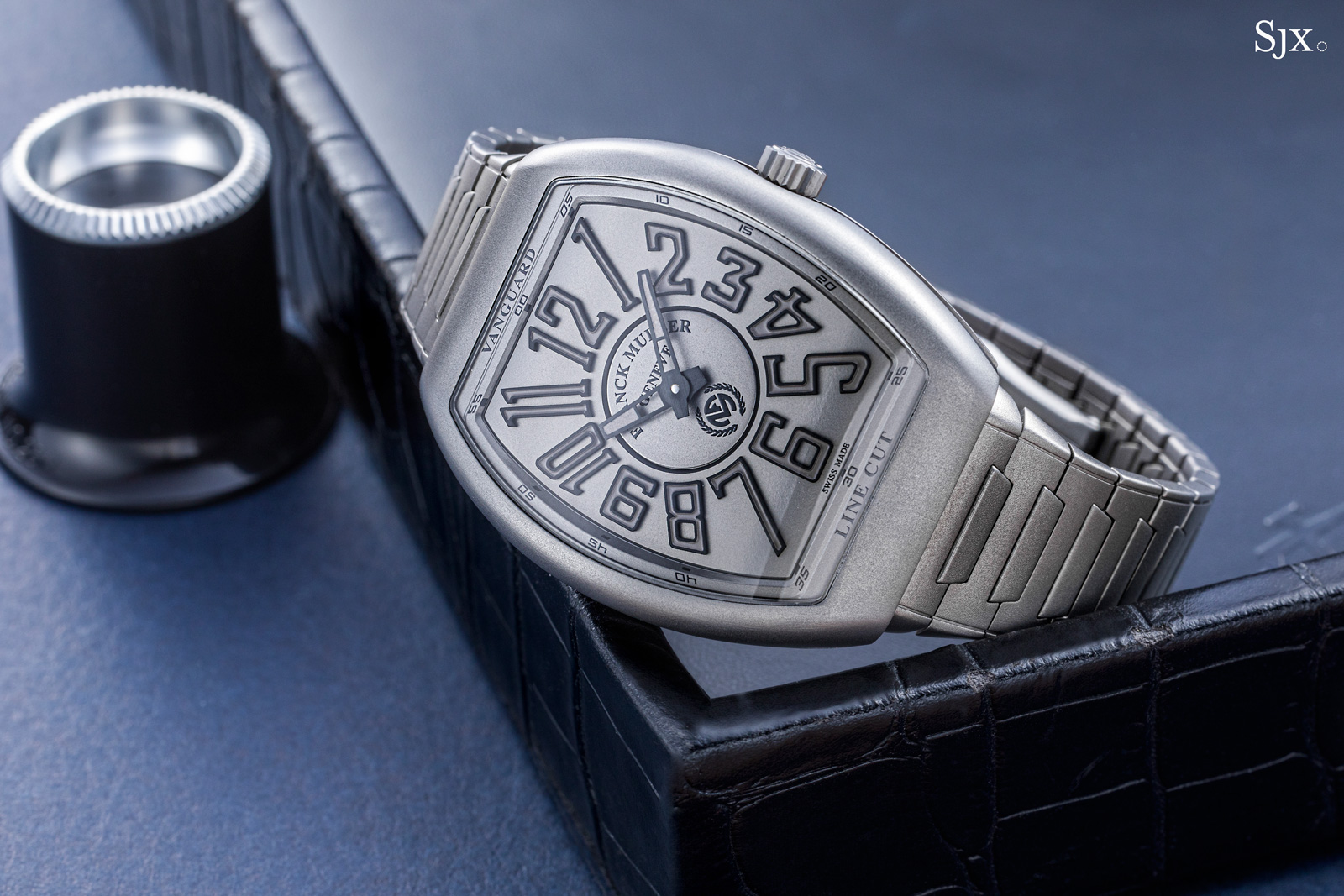 And the Line Cut has a new calibre developed for the watch, which makes it more interesting in technical terms. That said, the movement is slightly mysterious since Franck Muller provides no info about it other than the specs, at least officially. The specs indicate the movement is indeed an in-house movement, since they don’t correspond to any well-known calibres. (And based on what I have learnt about the movement unofficially, the construction is proven, robust, and reliable.)

The only shortcoming of the watch from a functional perspective is its water resistance of 30 m. While more than enough for everyday wear, that is not quite enough for a true sports watch, which would call for at least 50 m. 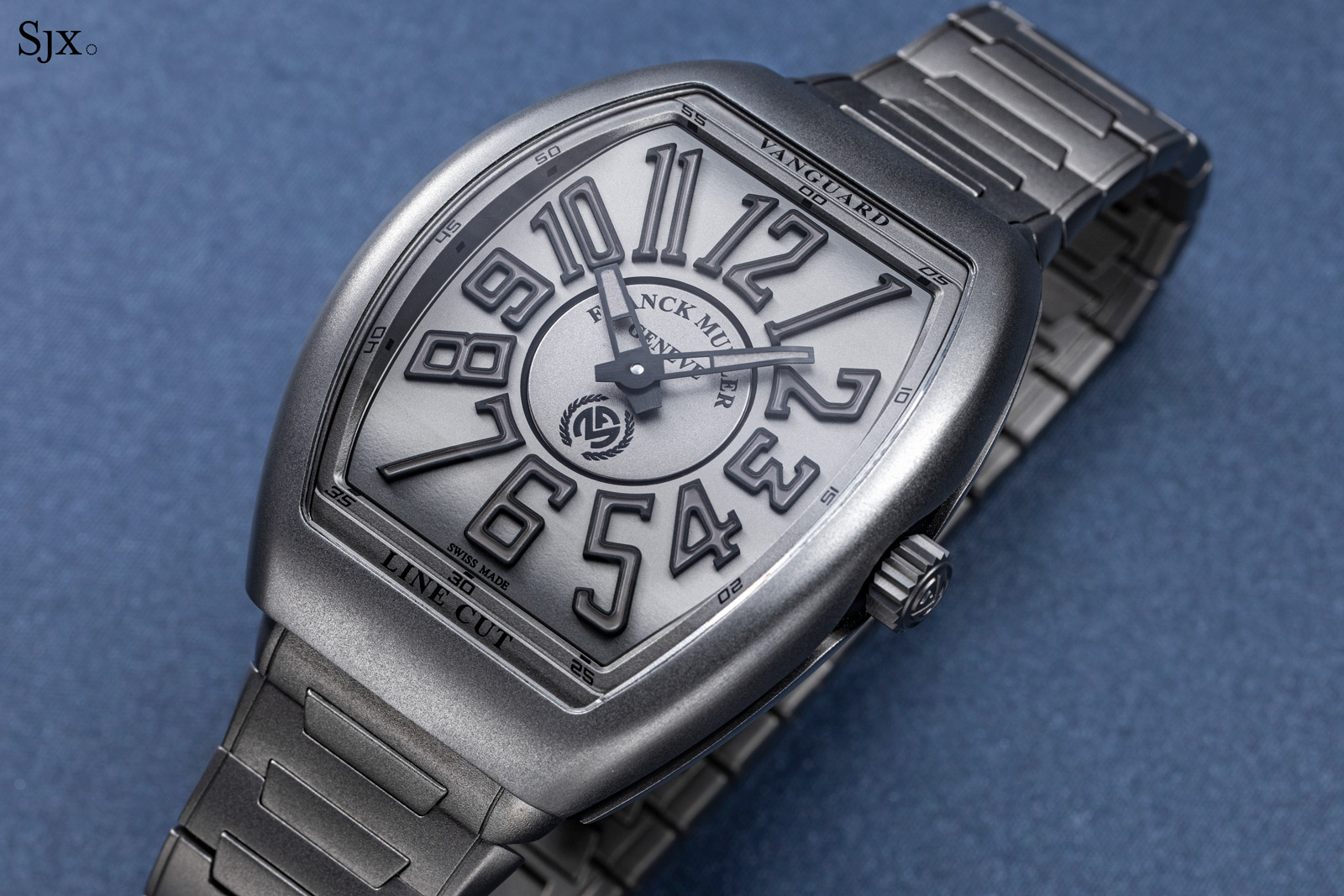 But still the Line Cut does have excessive design on the dial. The brand appears both in name and in its wreathed logo, along with the collection and model names at six and 12. Most of that could be pared back and the watch would be more appealing yet recognisable as a Franck Muller.

Since the watch is simple in style, I would also wish for more refined detailing, for instance on the hands or applied numerals.

Overall, the Line Cut is an under-the-radar proposition in its category. At about US$10,000 retail, it’s priced comparably to alternatives and offers comparable build quality but with a smoother, more streamlined feel. 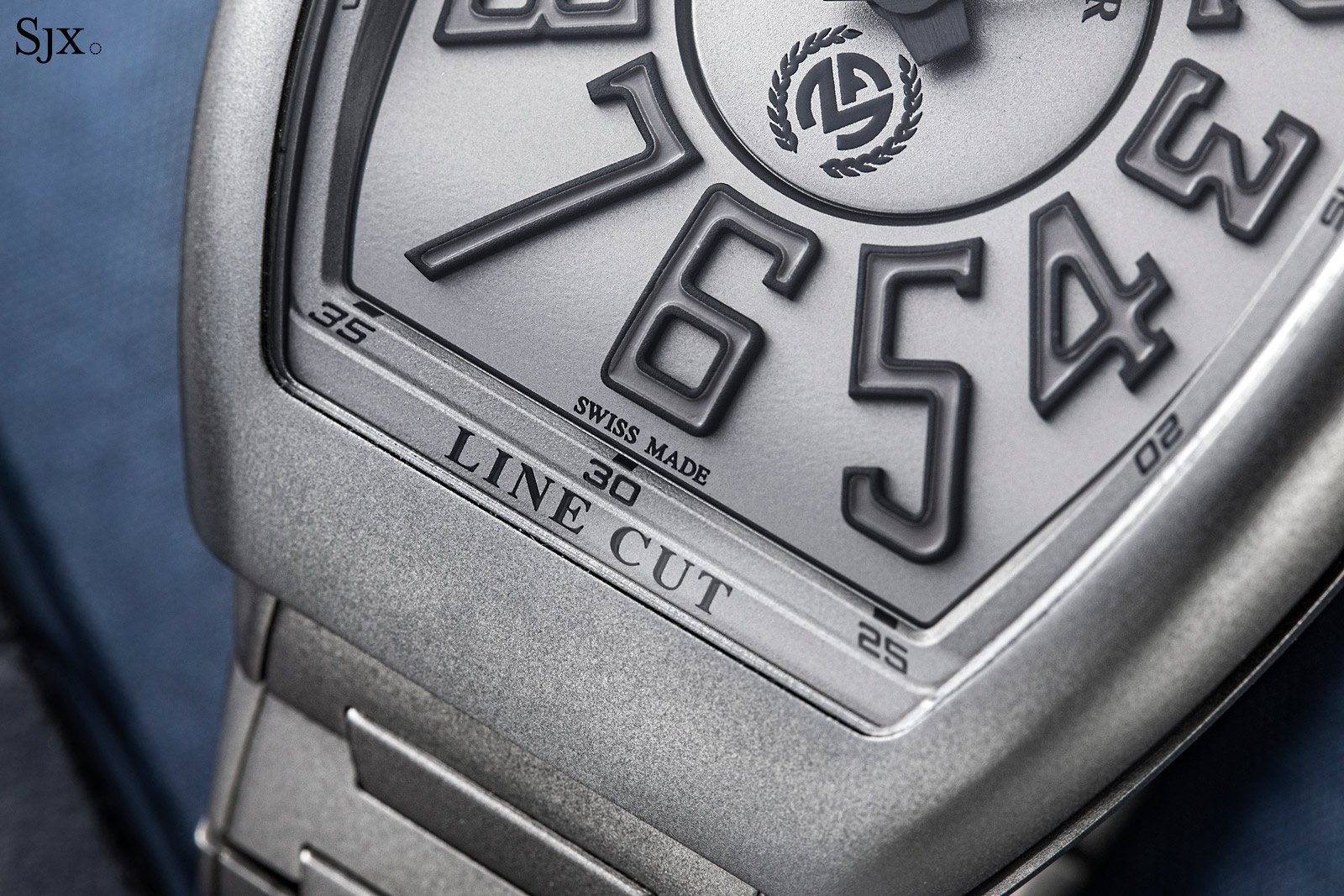 Introduced several years ago as a sporty take on Franck Muller’s signature case shape, the Vanguard is usually big or bigger. In fact, the recently introduced 43 mm model is “mid size” though it’s a large watch.

The Line Cut is essentially a flattened and simplified take on the Vanguard 41, the smallest of the standard models. While it has the same diameter, the Line Cut is about a quarter thinner than the standard model. And it does away with the seconds hand and date, giving it a clean, functional face, notwithstanding all of the branding. 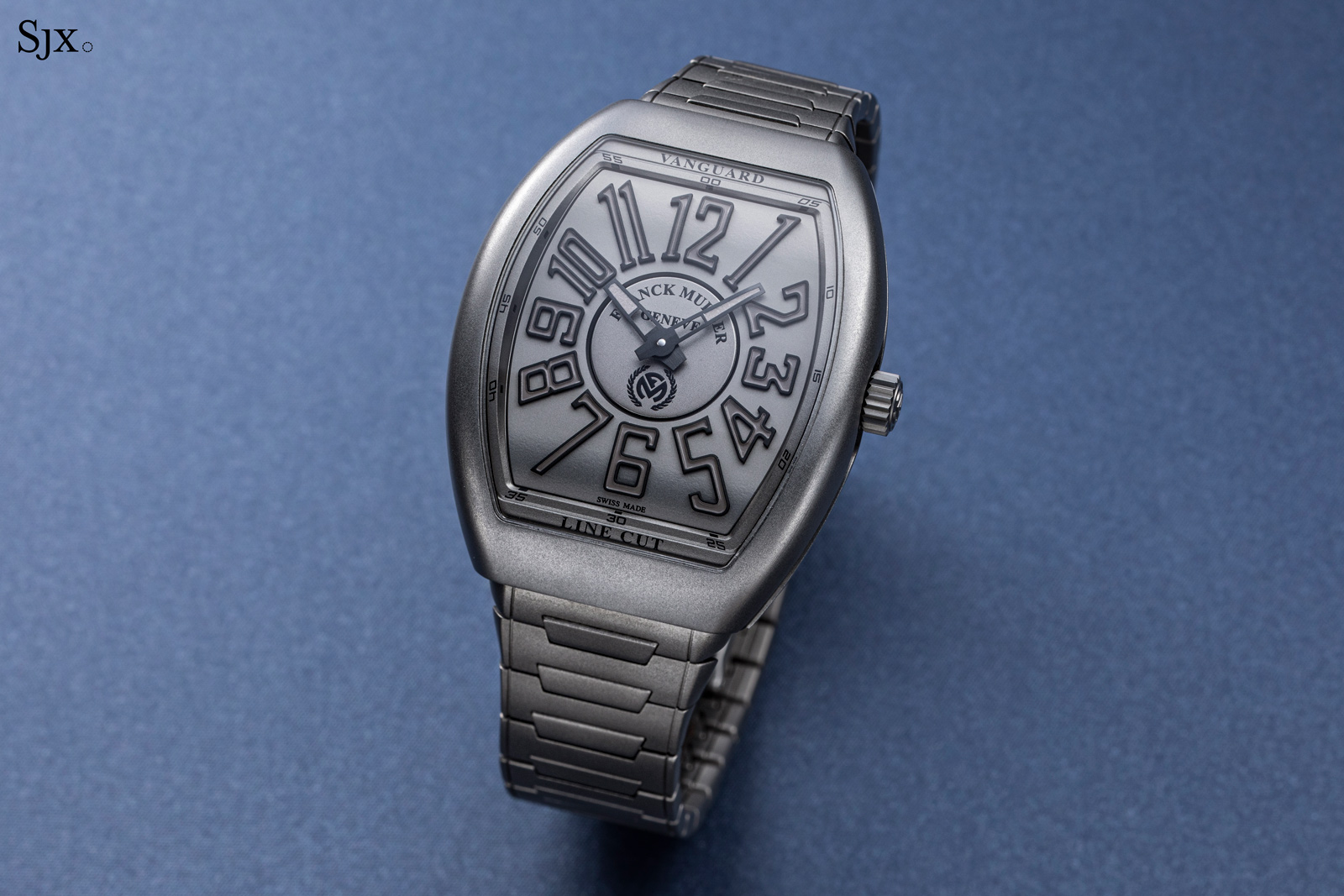 So at 41 mm by 50 mm and just 9.1 mm high, the Line Cut is svelte in comparison, but perfect for anyone who wants a moderately sized watch. Notably, tonneau-shaped cases usually lose their elegant profile beyond a certain size, but the Line Cut is just right. It’s a largish watch but manages to retain a sleek feel.

While the 9.1 mm height of the Line Cut is not extreme – the Royal Oak “Jumbo” ref. 16202 is 8.1 mm for instance – it feels much thinner than it looks. At the same time, it looks much thinner on the wrist than it actually is. That’s largely due to the arched, tapering profile of the case, historically a key feature of Franck Muller’s tonneau cases. 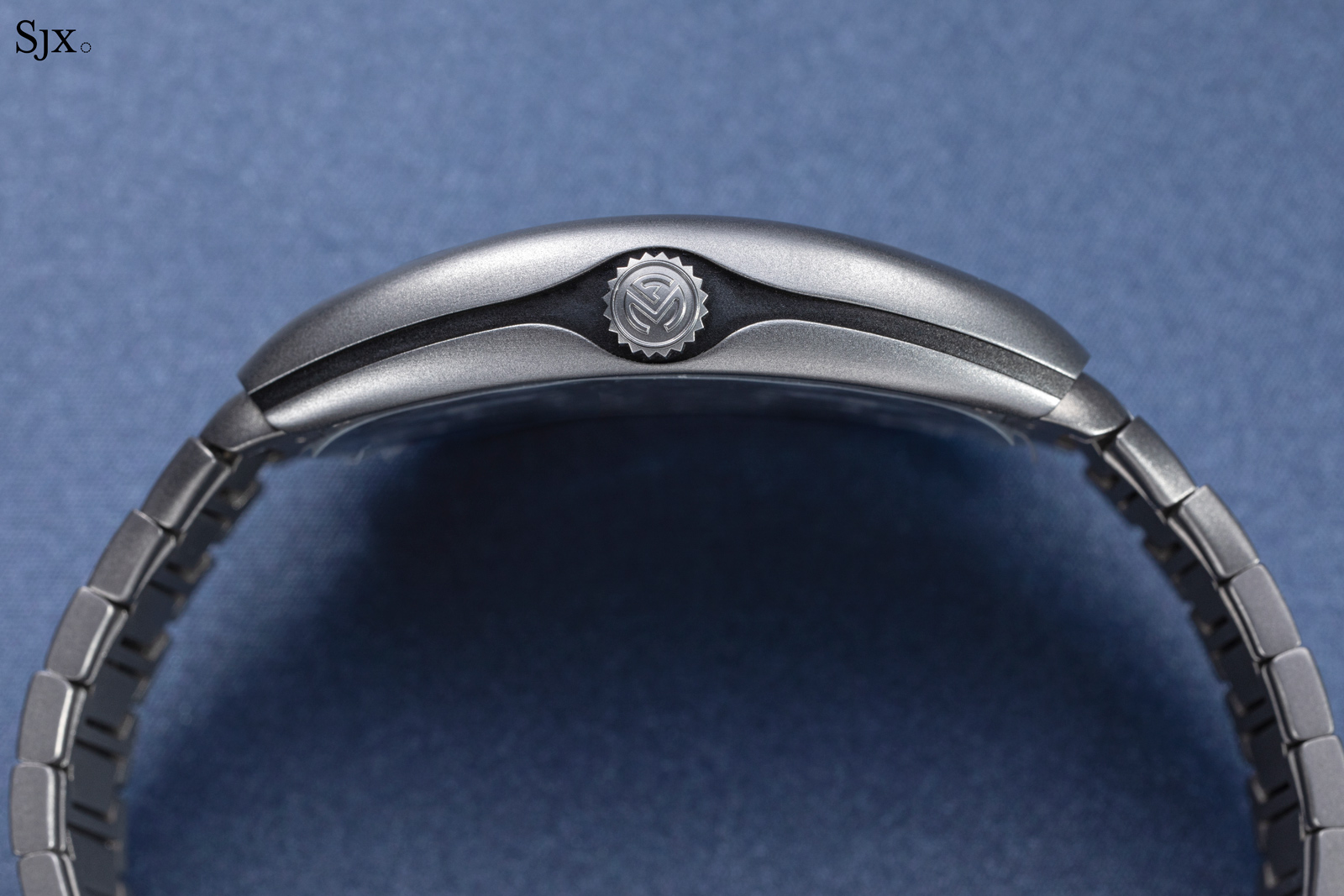 when put against the standard model that’s a bit over 12 mm high, the Line Cut feels like an ultra-thin watch

The only aspect of the case I do not like is the resin-filled channel along the sides of the case. This is found in all Vanguard models and is intended to create the visual impression of a sandwich construction where two halves of the case meet. It was no doubt inspired by the many brands that do use a similar construction like Hublot and Richard Mille.

On the Line Cut, however, the channel is entirely decorative. As far as I can tell, the case middle is one piece so the channel is basically an engraved trench that’s filled with black resin. Doing away with the channel would give the case even cleaner lines that are evocative of the original Franck Muller Cintree Curvex watches of the 1990s. Fortunately the channel is not obvious when the watch is on the wrist. 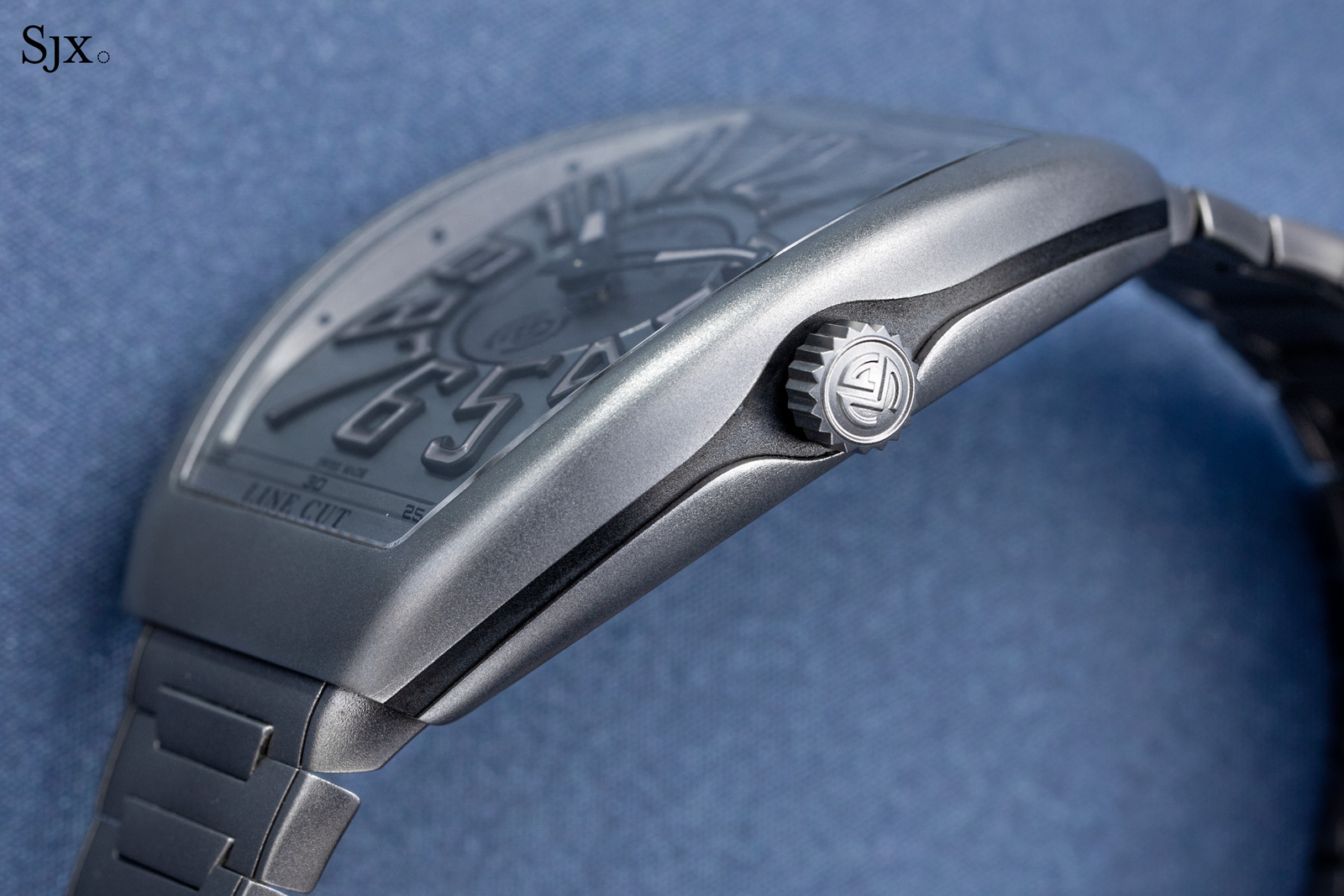 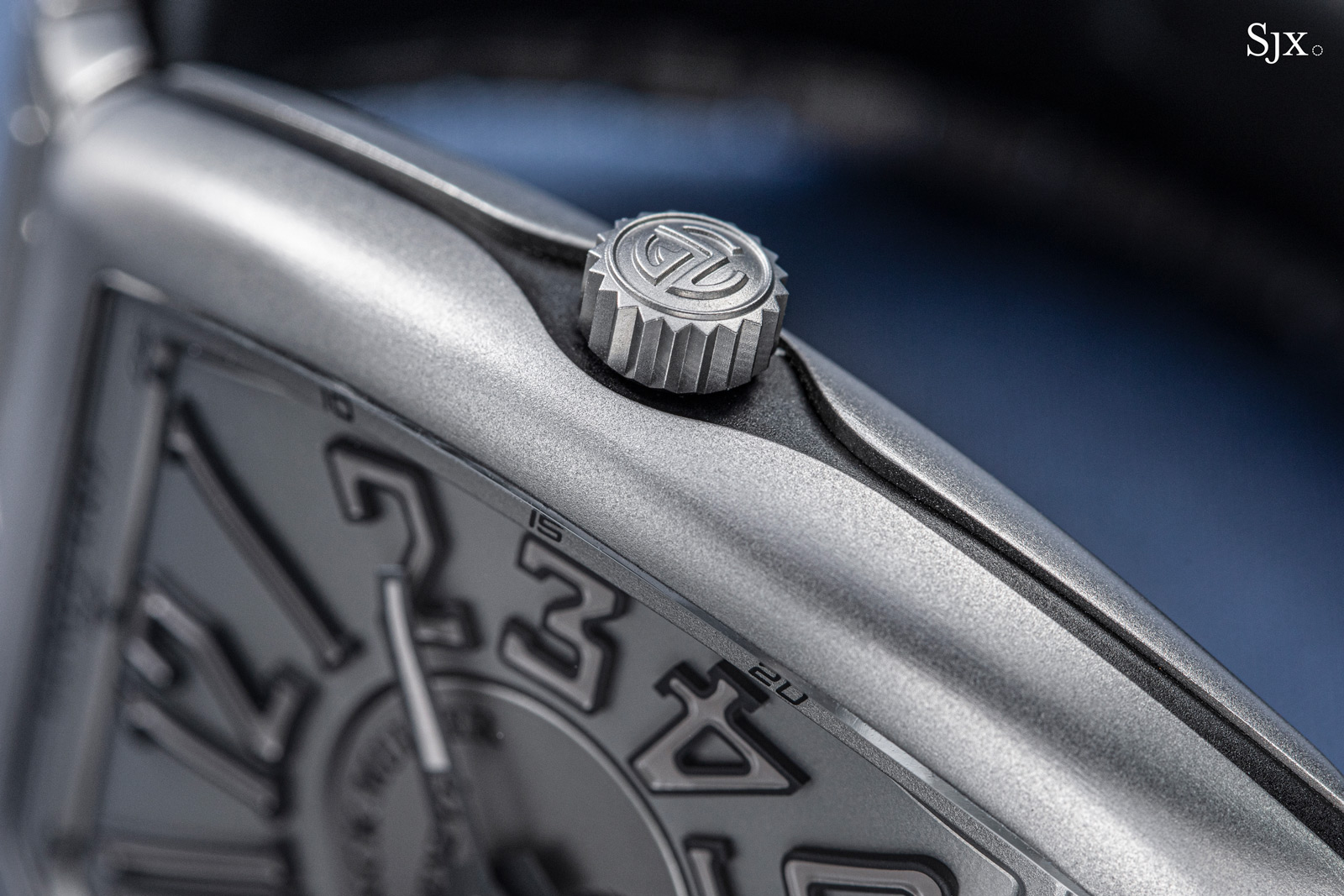 The Line Cut adopts the dial design of the standard Vanguard. It preserves almost all of the look, except for the minute track, which is simplified to only have five-minute markers.

As I mentioned above, I would prefer even further simplification of the dial design, but that is probably too much to ask from a brand that likes its flamboyant style. 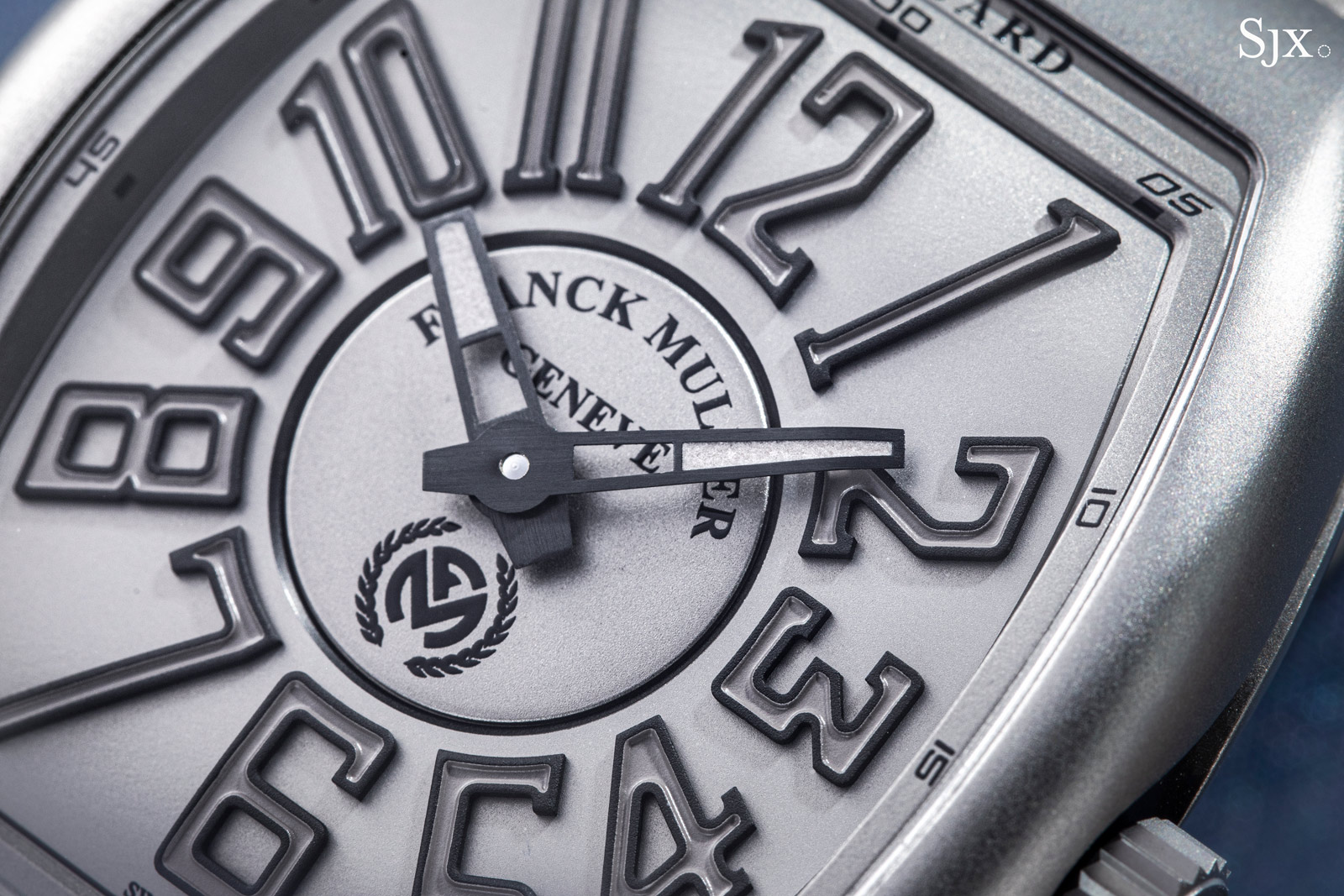 In terms of execution, the dial is good enough, though not quite excellent. The printing, for instance, could be improved with added thickness and sharper definition. 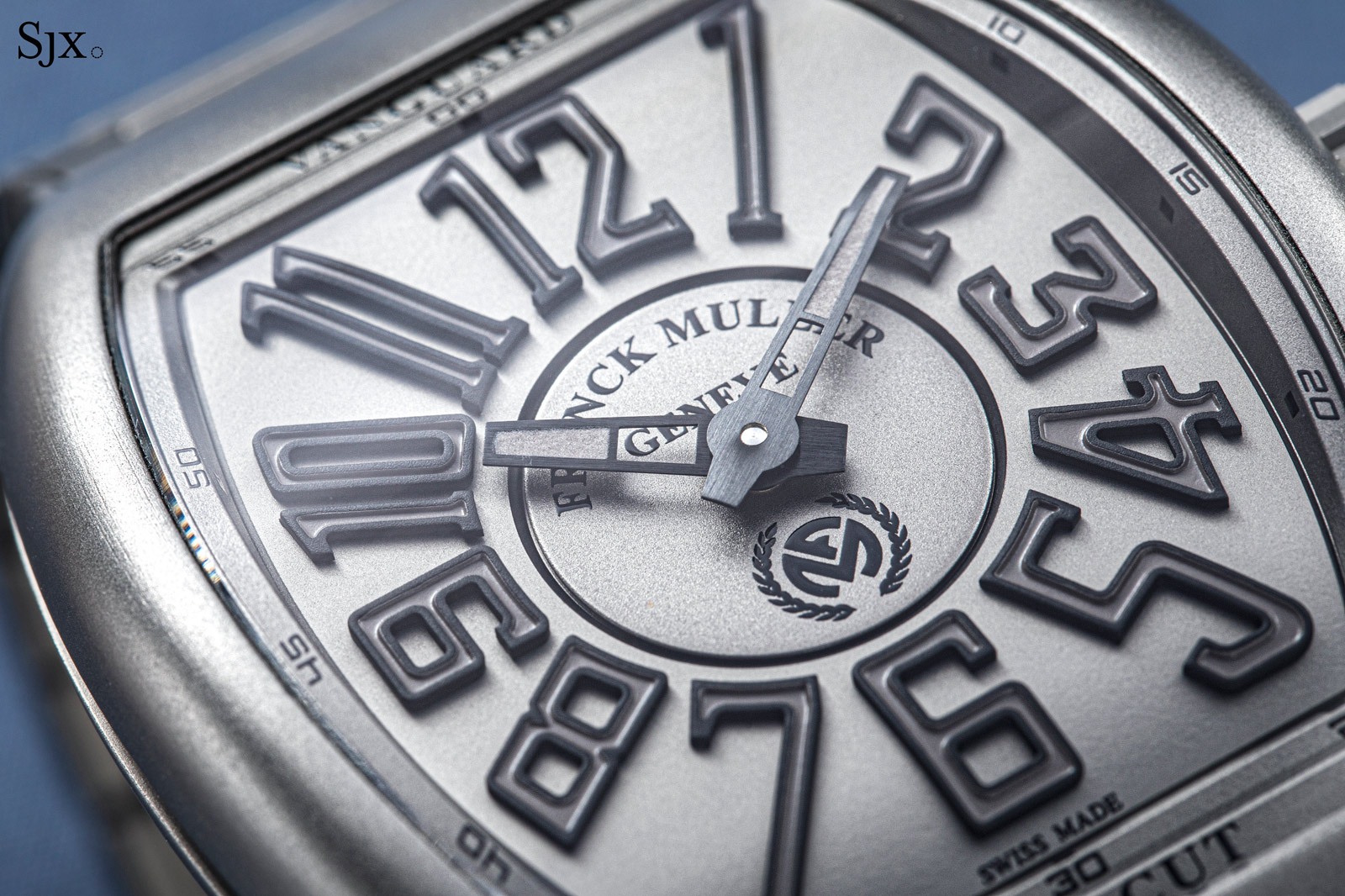 Not integrated but it flows

Interestingly, the bracelet has more slightly complex lines than the case with a flute on each edge of the links. And unlike many other watches in this category, the bracelet is not integrated into the case. Despite that the bracelet is a perfect fit for the case in visual terms. 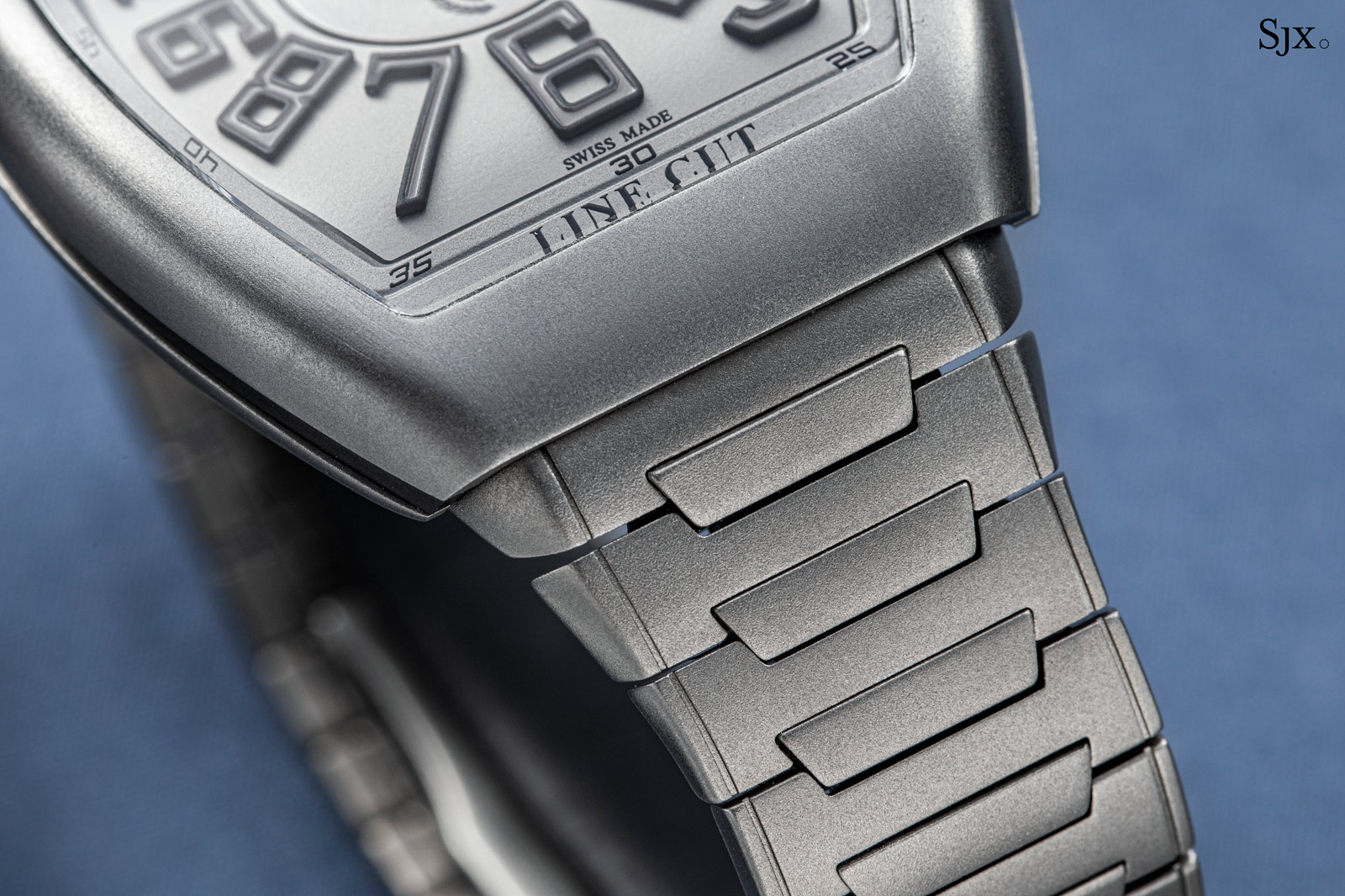 In terms of feel, the bracelet scores high marks. It is lightweight with a fluid tactile feel, so it sits comfortably.

The folding clasp is a little thicker than it should be, especially when compared to the height of the links. At the same time the friction-fit closure of the clasp is rudimentary for a relatively expensive watch.

Something slightly more sophisticated in terms of construction would have taken the bracelet to another level, for instance a clasp that recesses into the links or one equipped with hidden pushbuttons. Still, the bracelet gets the job done so it is sufficient. 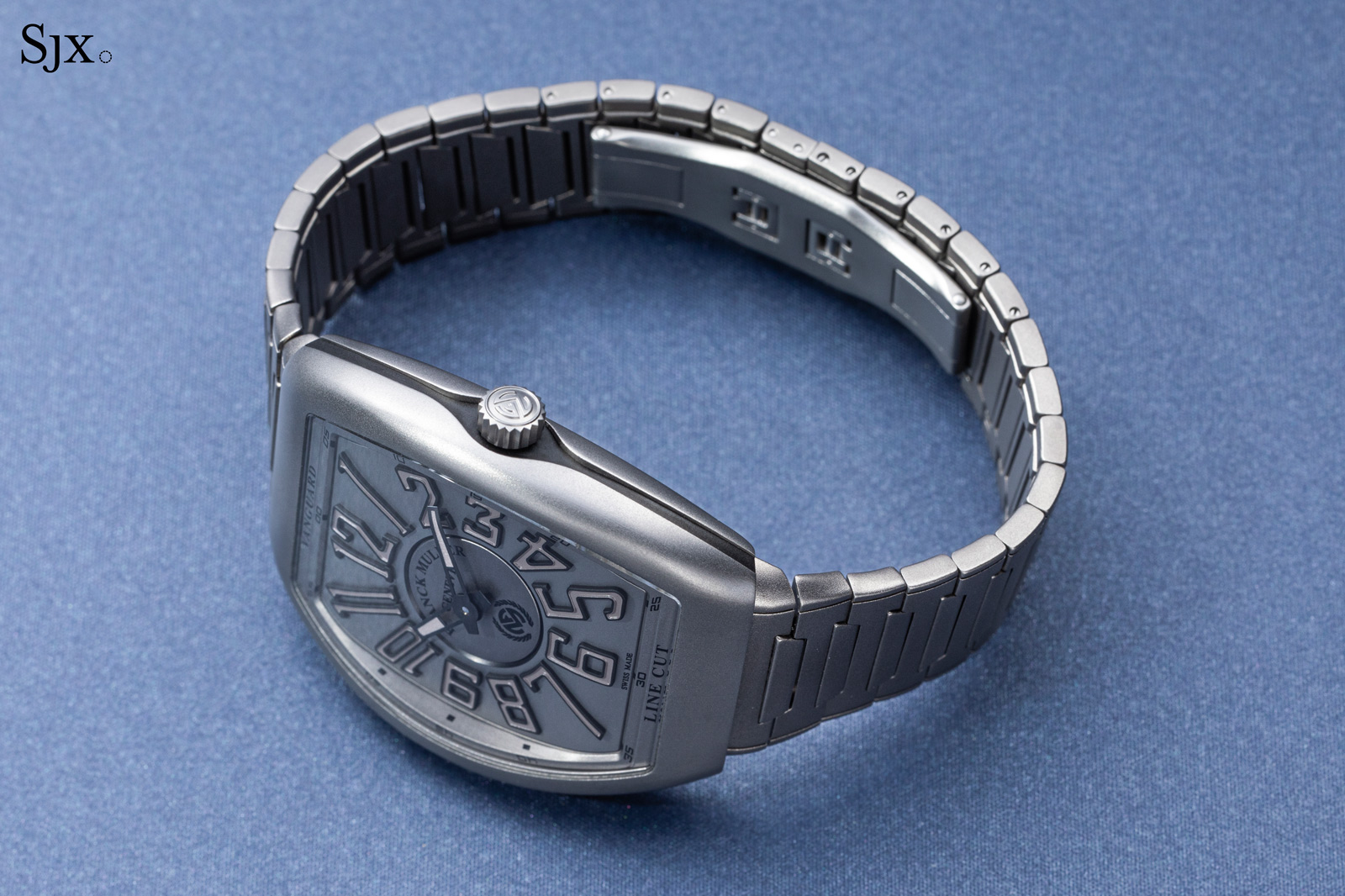 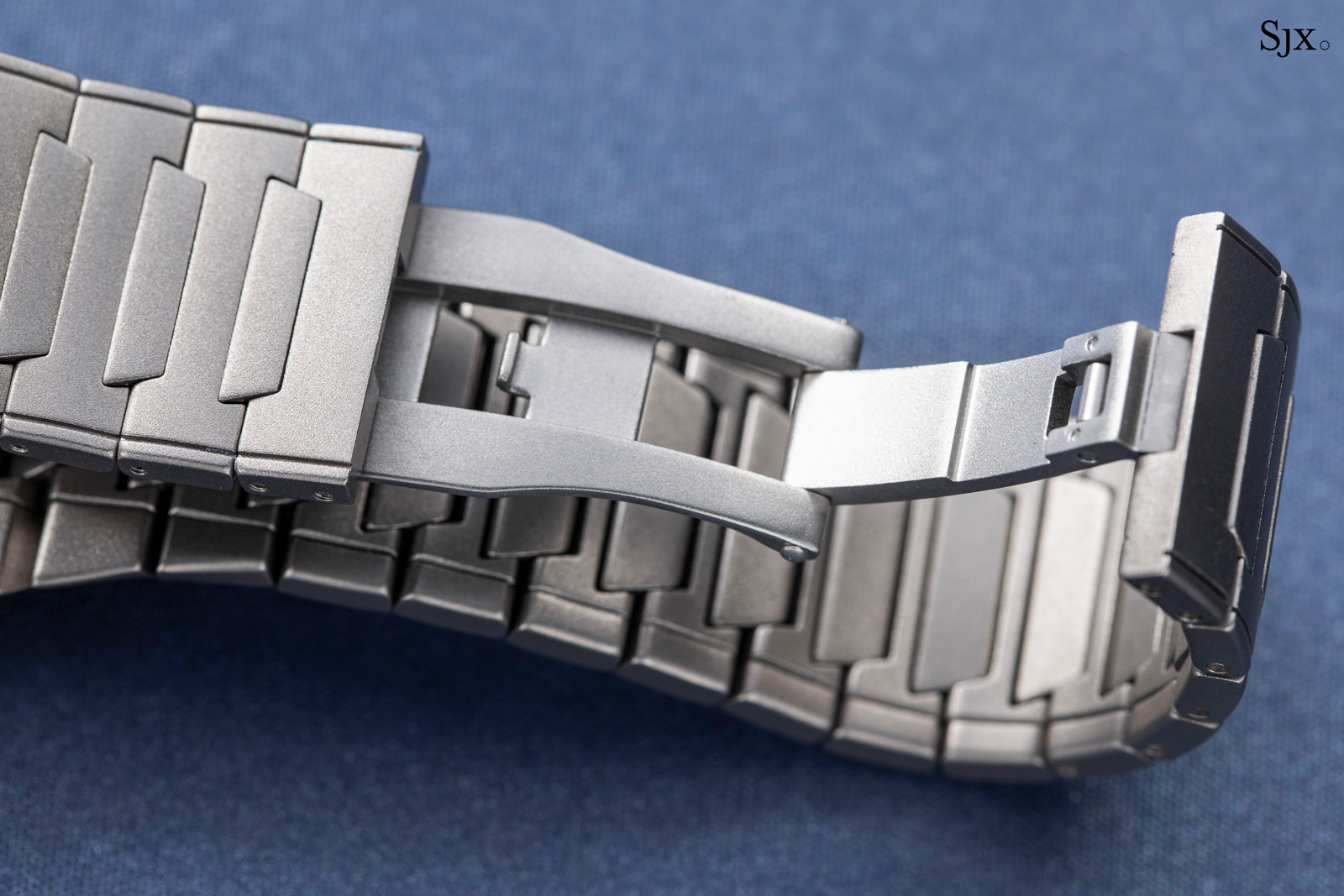 The FM 708 movement within made its debut in the Line Cut. Franck Muller itself doesn’t say much and there are no images of it available. All the brand says is that the FM 708 was developed specifically for this model, though it will surely be found in other watches in time to come. The diameter and thickness of the calibre, along with the 3.5 Hz frequency, don’t correspond with any common movement, which confirms Franck Muller’s claim that the FM 708 is an in-house movement.

And based on conversations with some brand insiders, I know that the fundamentals of the movement are tried and tested so it will be a strong performer. 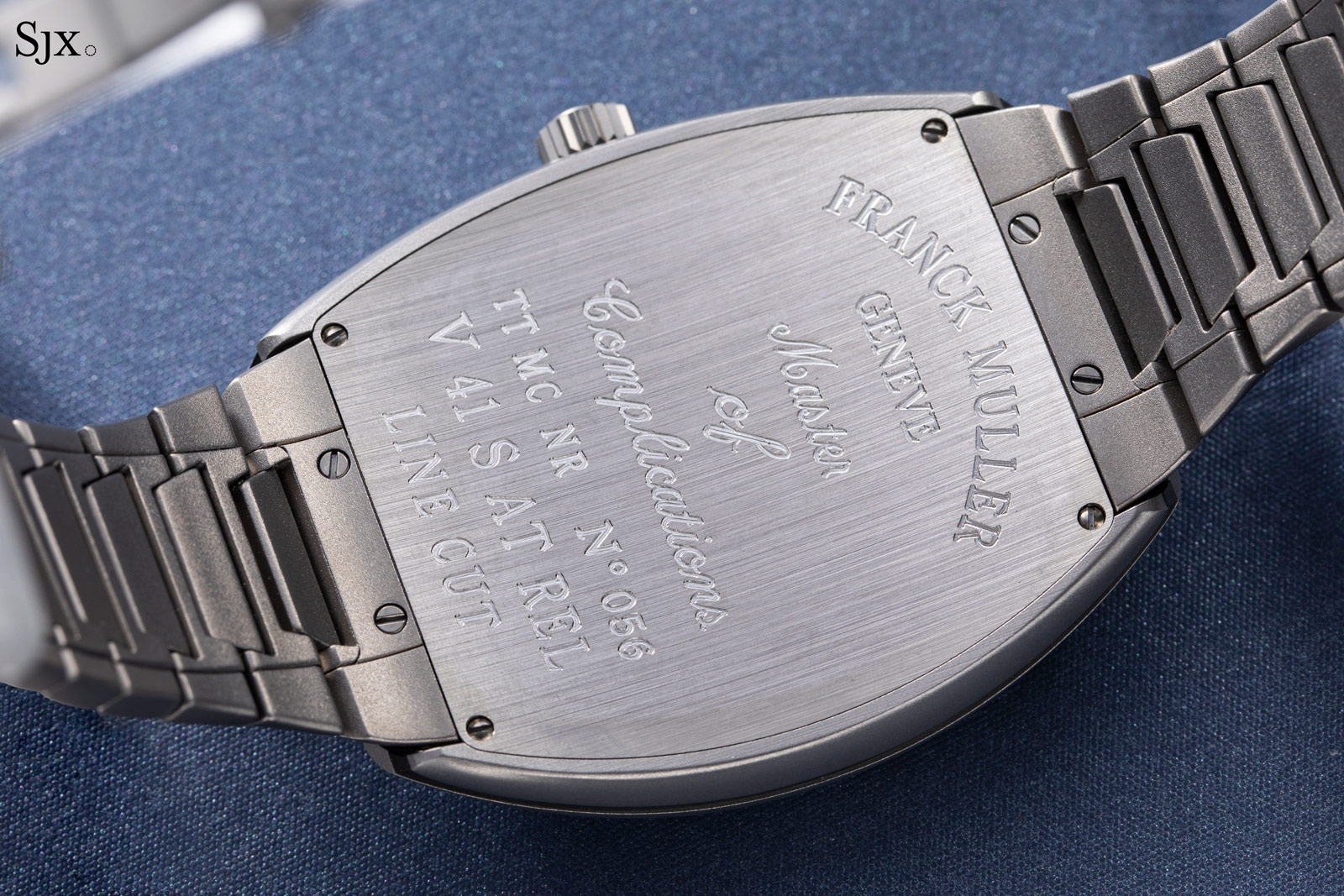 The Line Cut looks and feels unlike any other Franck Muller, which means it will appeal to anyone who thinks the average Franck Muller is too much in terms of design. It’s also priced well, both relative to Franck Muller’s other watches as well as its peers in the broader industry. The Line Cut is definitely something that Franck Muller should do more of.

Availability: Now at Franck Muller boutiques and retailers
Price: €9,800 including VAT of 20%