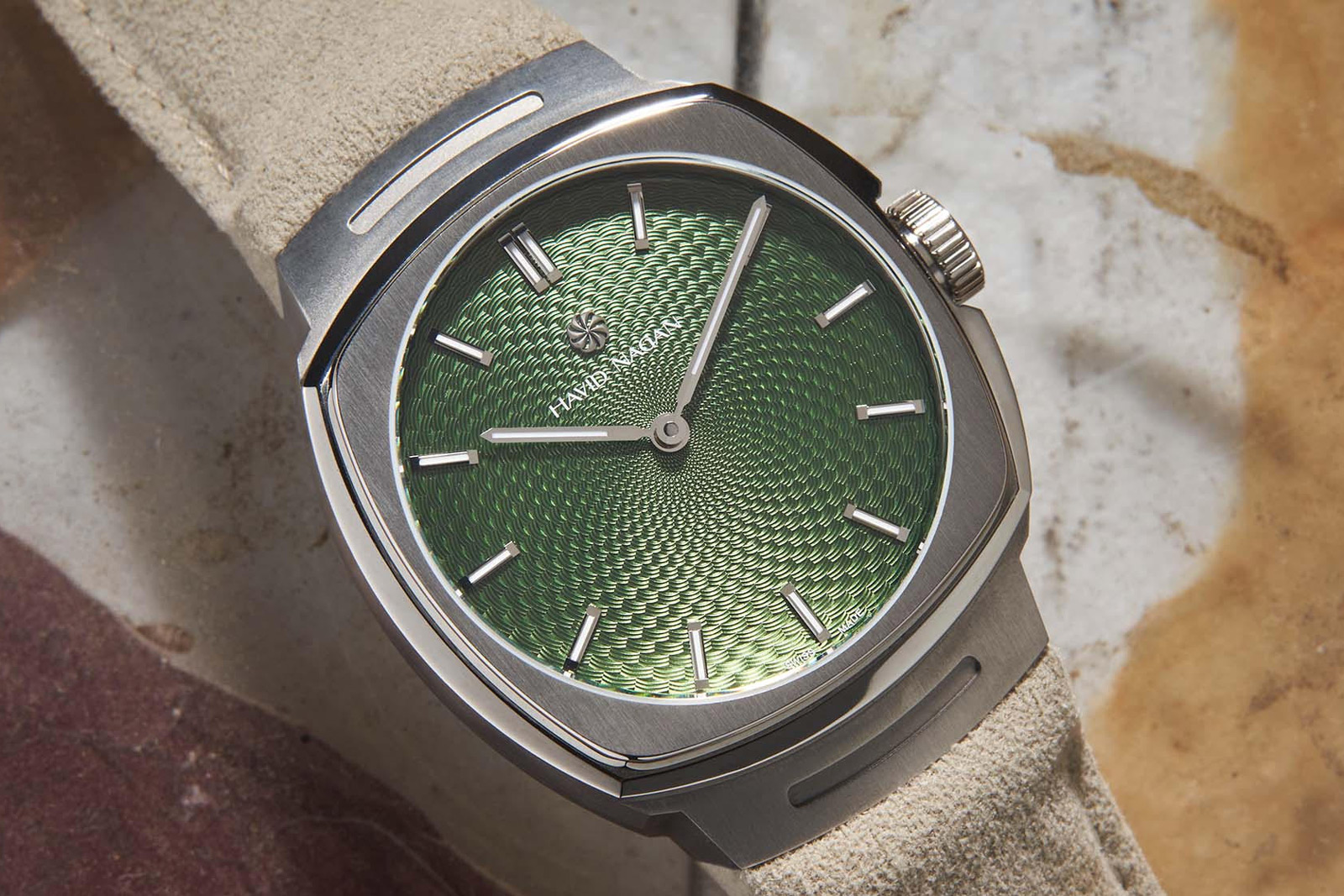 After two years of development, Havid Nagan has finally made its debut with the HN00 Titanium. An unusually well-honed design for the inaugural watch of a brand that originated on Kickstarter, the HN00 combines an original case with an attractive guilloche dial, as well as a respectable micro-rotor movement.

The genesis of Havid Nagan lay in its founder Aren Bazerkanian’s goal of producing a relatively accessible watch that incorporates elements typically found in pricier timepieces. So Mr Bazerkanian launched a modest Kickstarter campaign in 2019 to fund the prototyping process. 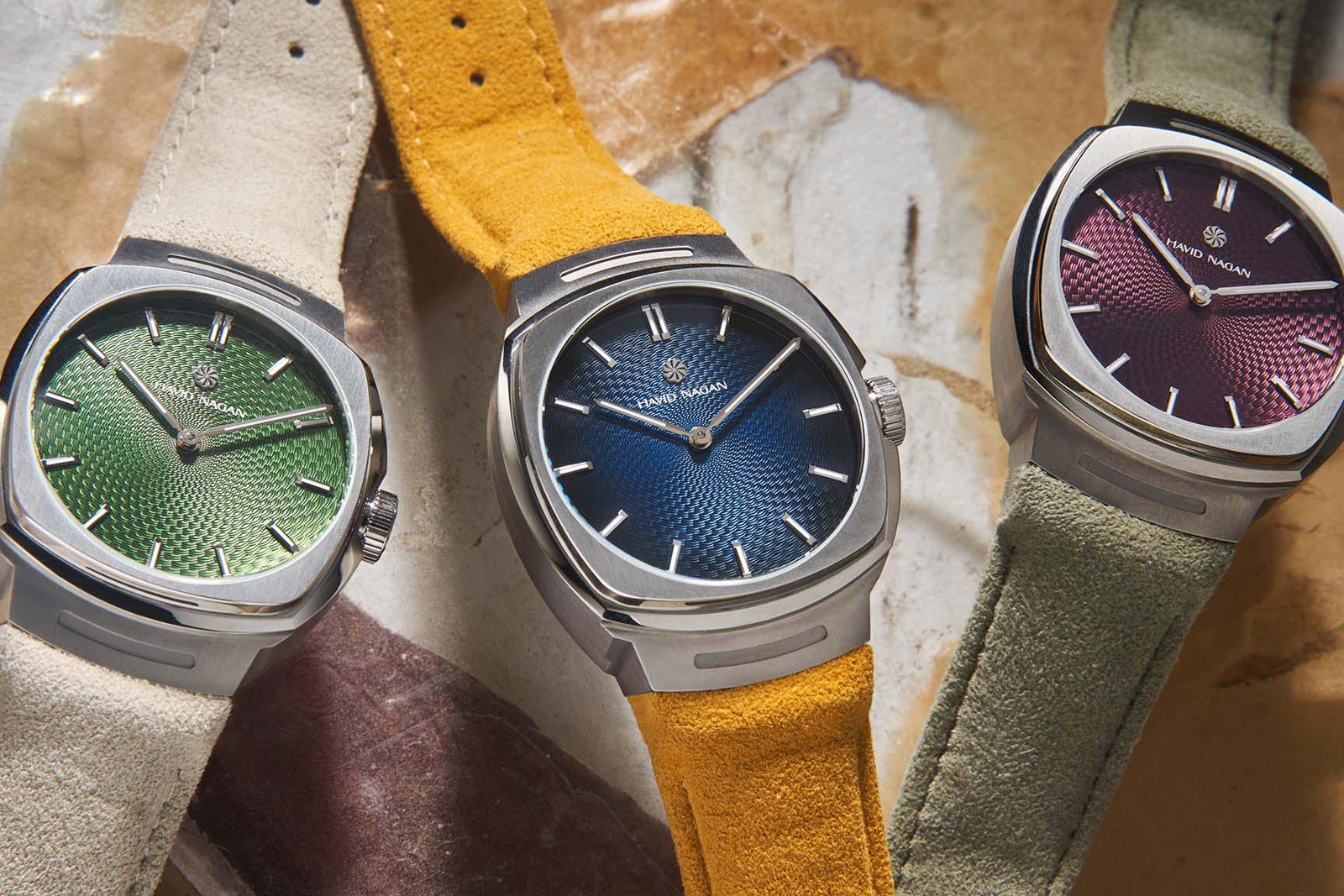 The HN00 is notable for managing a fairly original design that contains thoughtful details. Most impressive is the barleycorn guilloche dial covered in glossy, lacquer that mimics enamel. While the pattern is common, the HN00 dial is especially fine, especially around the centre of the dial where the grain converges and diminishes in size. Importantly, the dial has done away with superfluous elements such as a date or seconds hand, which presents the guilloche in all its glory. 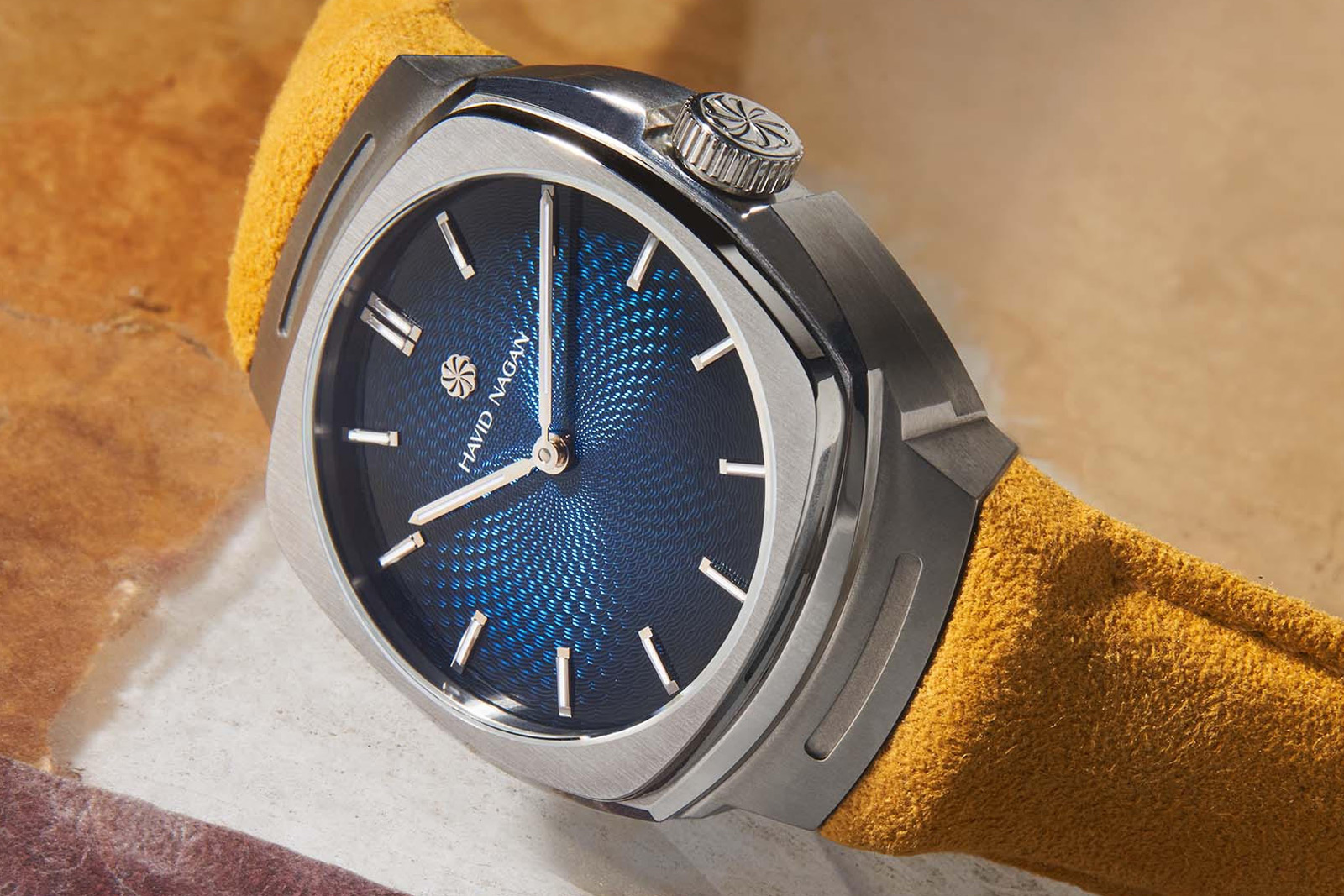 Even with the proliferation of the cushion-shaped case, the squarish case of the HN00 stands on its own. It avoids calling to mind watches from the likes of Panerai or Patek Philippe. The dimensions of the case are restrained, though it does feel a bit on the thick because neither the bezel nor the case back are sloped, while the case middle is tall, resulting in substantial verticality.

At US$8,000, the HN00 is accurately priced for the quality and is comparable to watches with similar specs that are the work of the same specialist suppliers. But it does feel steep because the price puts the HN00 in a crowded arena populated by established mainstream brands as well as better known independent names like Torsti Laine.

Still, what the HN00 lacks in brand prestige and technical innovation, it makes up for with the design and fine guilloche dial.

Measuring 40.7 mm by 11.6 mm, the steel case features a fairly complex construction that includes several details setting it apart from other cushion-shaped watches. Most notable is the multi-faceted components and integrated lugs. Interestingly, the straps are proprietary and are fixed by screws on the back, allowing for a clean integration with the case.

Similarly notable is the dial. Not only is the guilloche intricate – it is stamped, which explains the relative affordability – but covered in clear lacquer that catches the light, giving the surface a three-dimensional aspect. 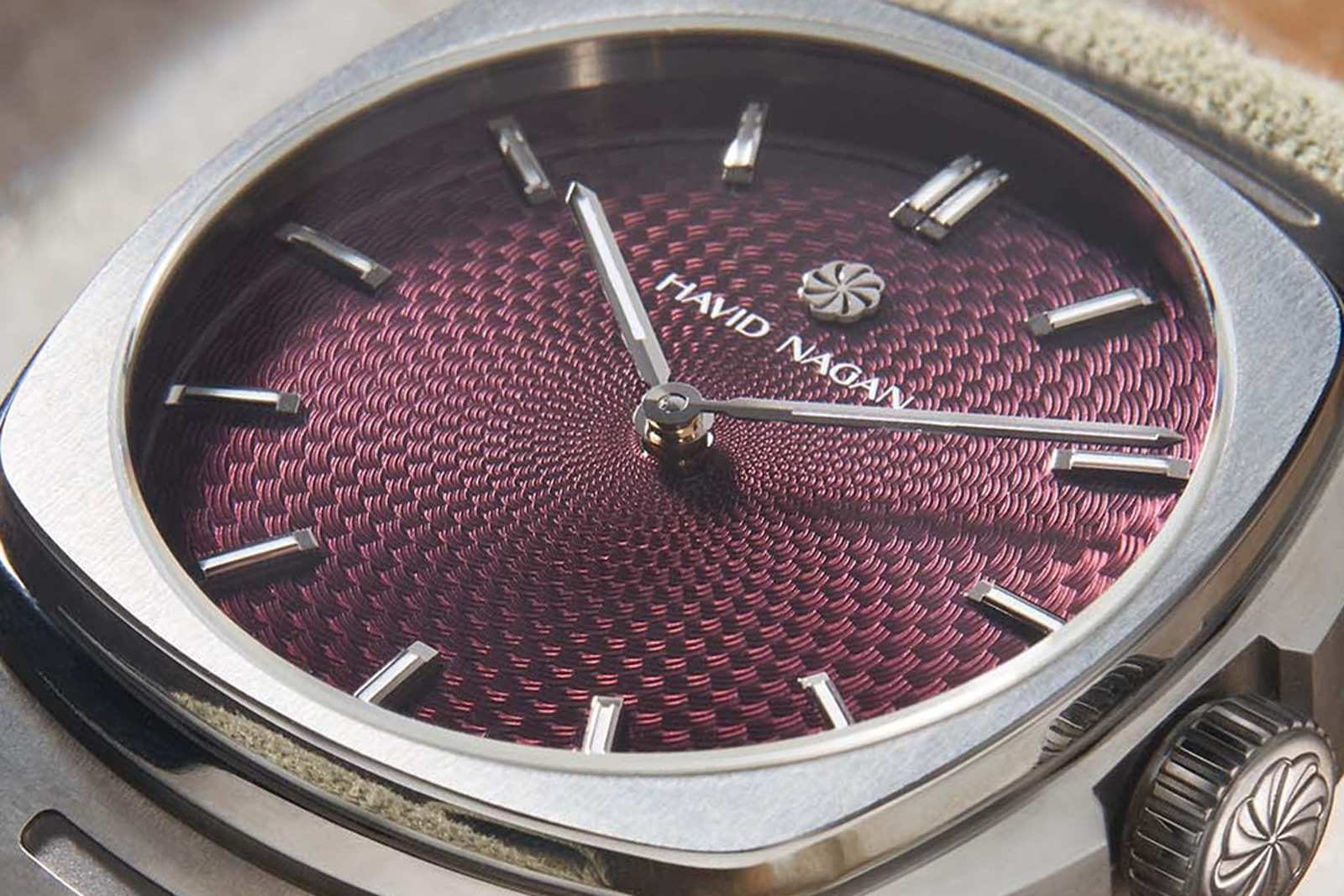 The applied logo and hour markers are diamond-cut and polished

Beating inside the HN00 is the ASE200, an automatic movement made by Schwartz Etienne (SE). The ASE200 is a good looking calibre thanks to the unusual micro-rotor construction, while managing a lengthy power reserve of 86 hours.

Because Mr Bazerkanian originally envisioned a movement with plates made of blackened 18k white gold – an impossibility at this price – the bridges of the ASE200 are coated in a dark grey. And the barrel cover is embossed with the brand’s logo, though the brand says that the final production version will sport a skeletononised barrel cover instead.

Notably, SE offers its own line of watches with the same movement and guilloche dials made the traditional way, namely a hand-operated rose or straight-line engine, which results in a far higher price tag of over three times the HN00. 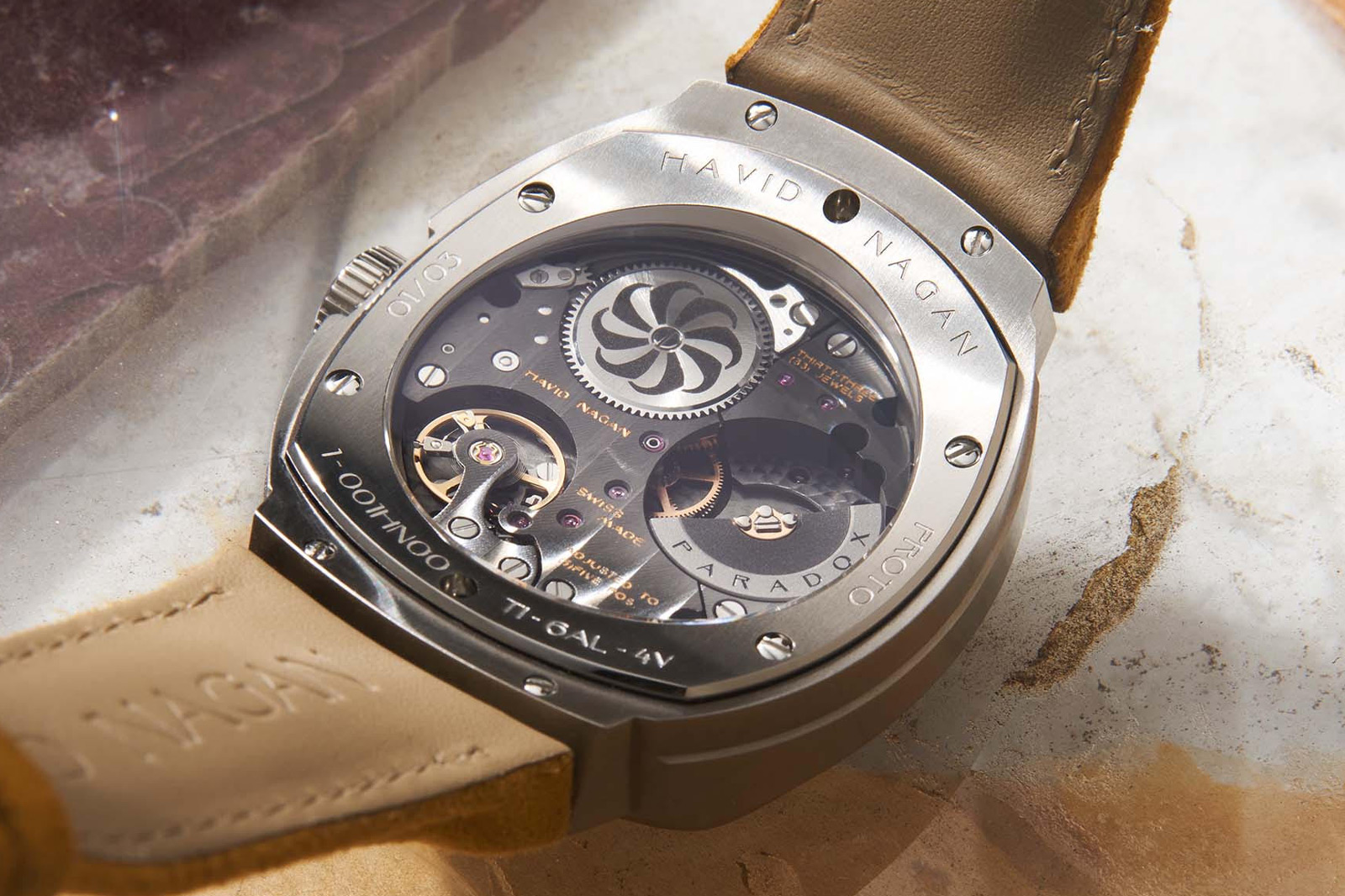 Limited edition: 100 pieces for the version with a blue dial
Availability: Direct from Havid Nagan
Price: US$8,000

Correction February 10, 2022: The dials are stamped instead of engine turned as stated in an earlier version of the article.