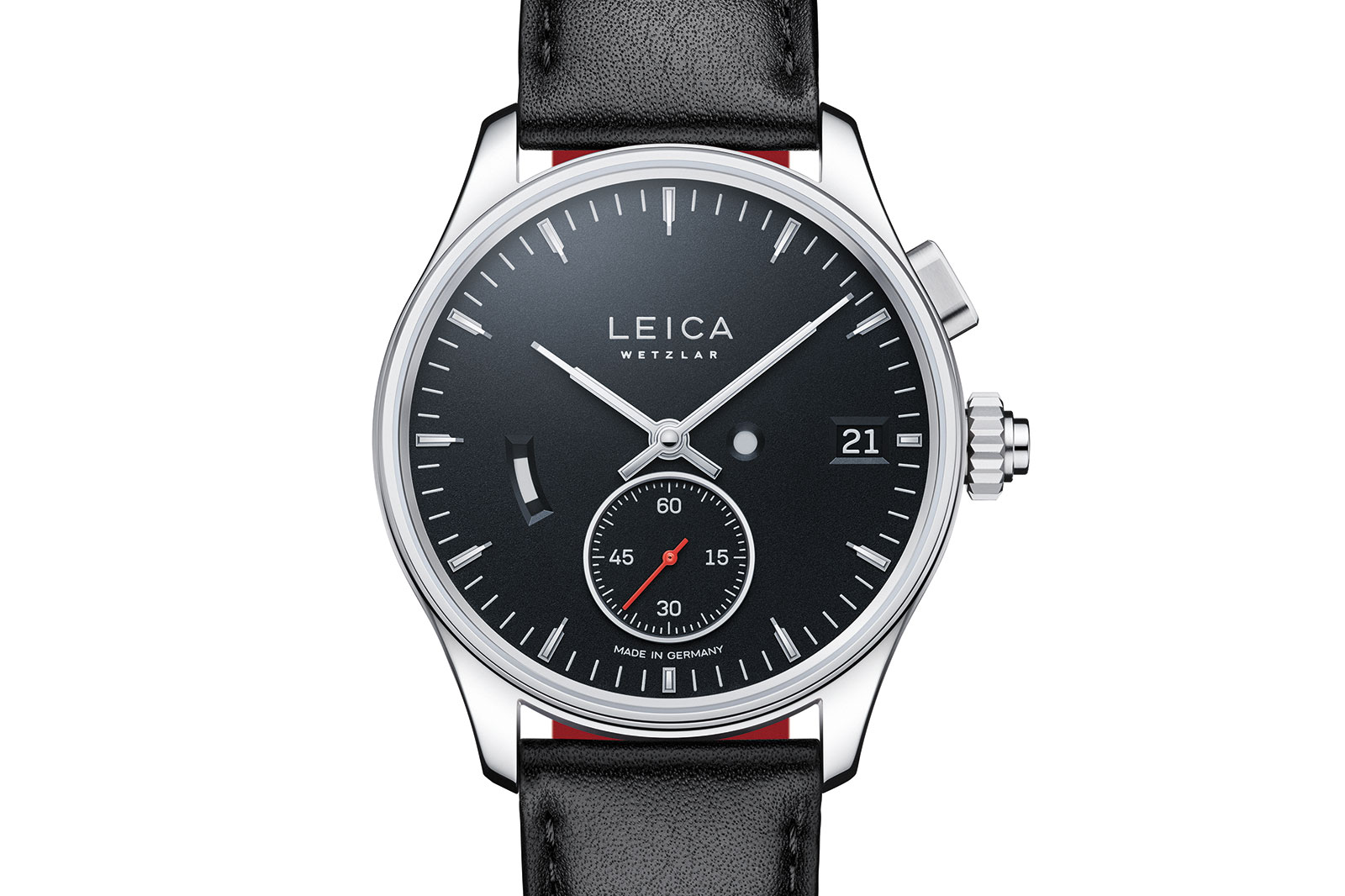 Originally announced in 2018, the Leica L1 and L2 wristwatches have finally made it to market. Developed with the help of a German watchmaker but very much a proprietary product, the L1 and L2 are both powered by variants of the same cleverly constructed calibre that is an impressive debut for the camera maker’s horological venture.

The Leica watch has a restrained, Germanic aesthetic with interesting details, but more importantly an interesting, thoughtful movement.

Developed from the ground up for Leica, the calibre features useful complications like a power reserve and hacking, zero-reset seconds, but executed in an unusual yet practical manner. At the same time, the patented pull crown is novel without sacrificing functionality. 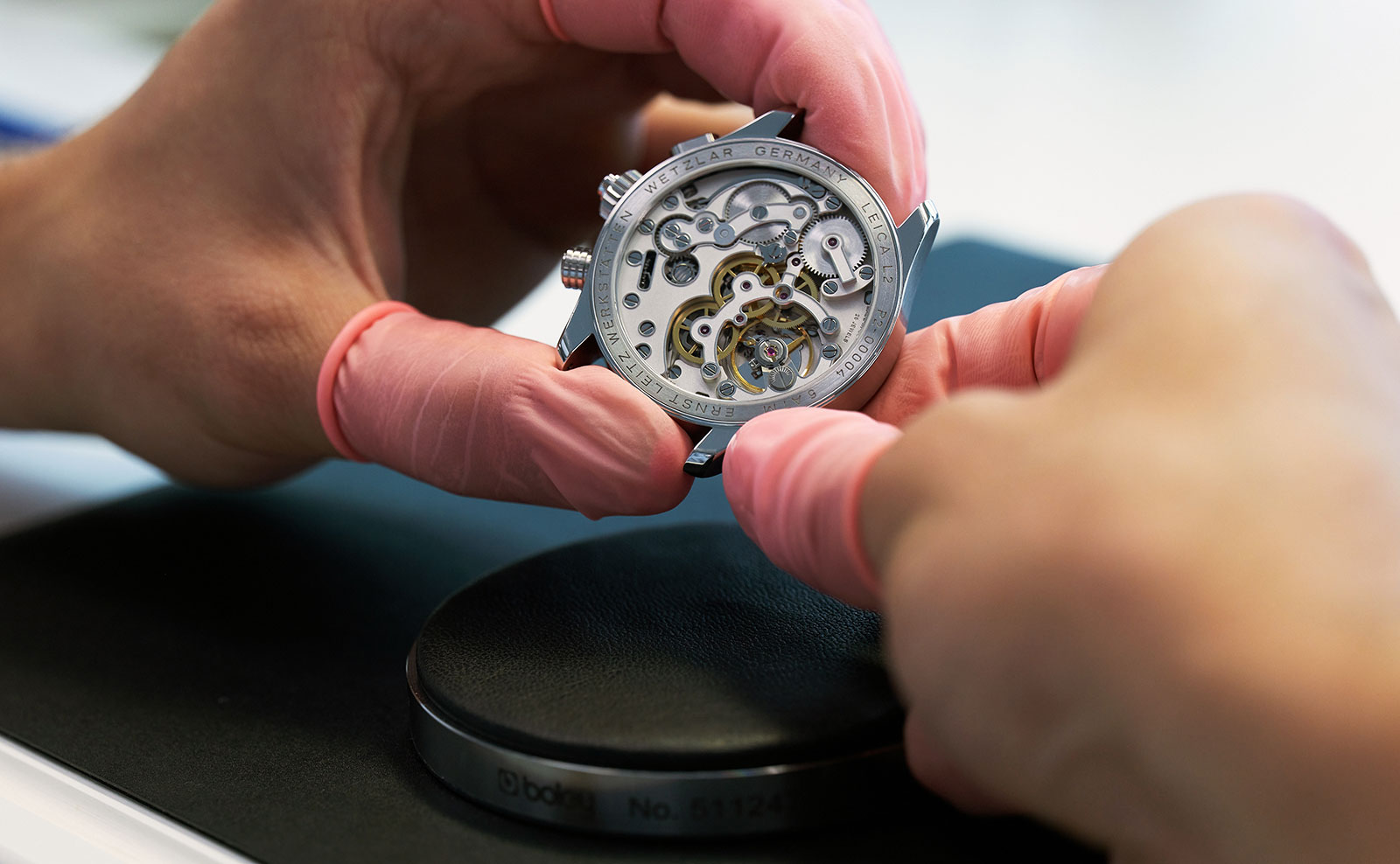 The design of the movement is also appealing, with its partially open-worked bridges cleverly exposing the key components of the going train and complications

The watch is big, but not excessively large. Considering the size of the calibre, the case dimensions are acceptable. That said, this is the limit, any larger and the case would be enormous.

It helps that the styling is attractively low key. The dial and case appear simple at a distance, but reveal their details up close. The hands and hour markers, for instance, echo each other, while the crowns are finely knurled. 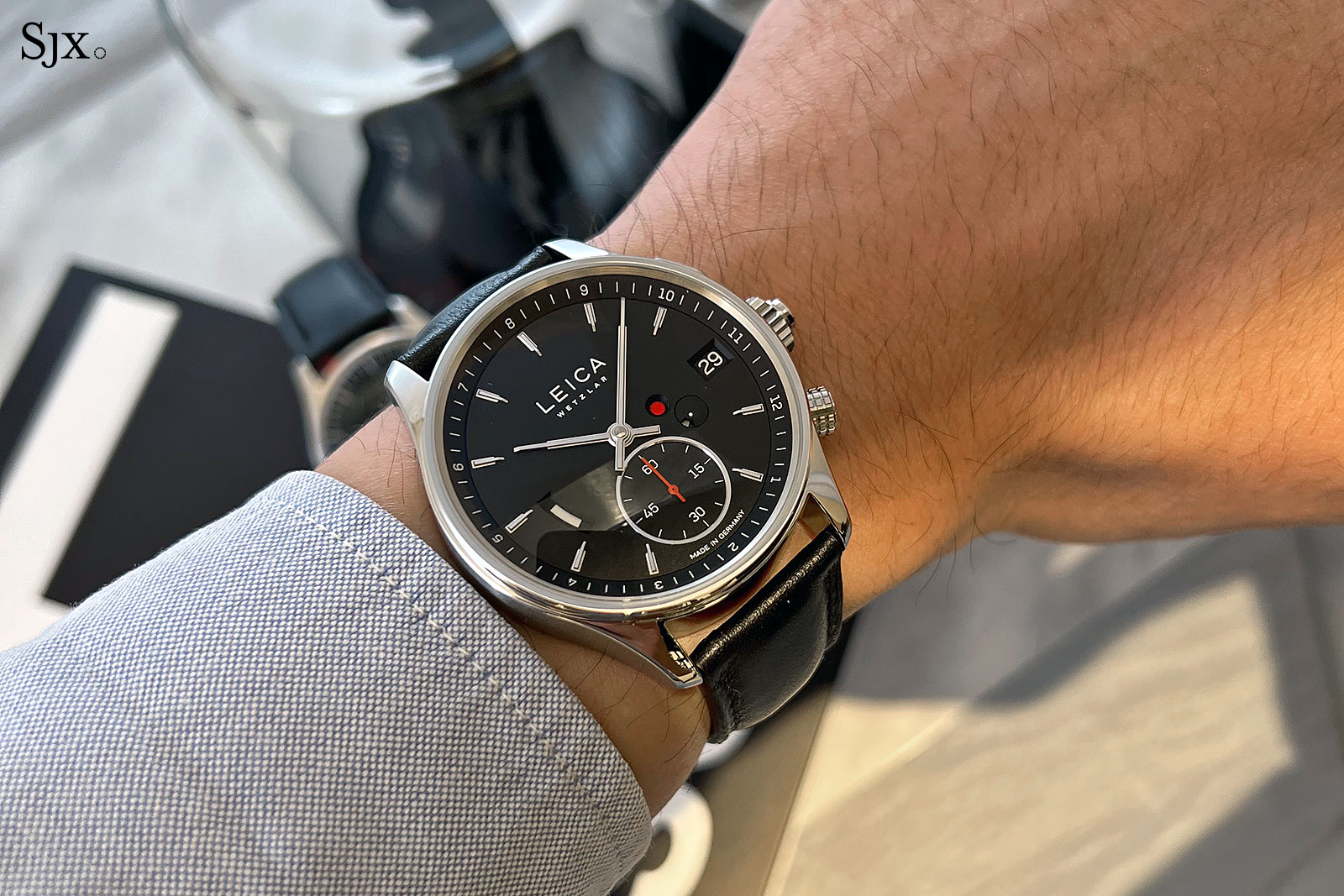 Leica also avoided a common pitfall of watches inspired by other technically-oriented industries, no doubt thanks to Achim Heine, the noted industrial designer who was responsible for its styling.

The references to photography are subtle, avoiding the overt and excessive styling that characterised the Leica-Valbray watch of 2014 that had a large shutter over the entire dial.

Priced at just over US$11,000 for the L1, Leica’s maiden foray into wristwatches is surprisingly appealing, both in terms of style, features, and value. 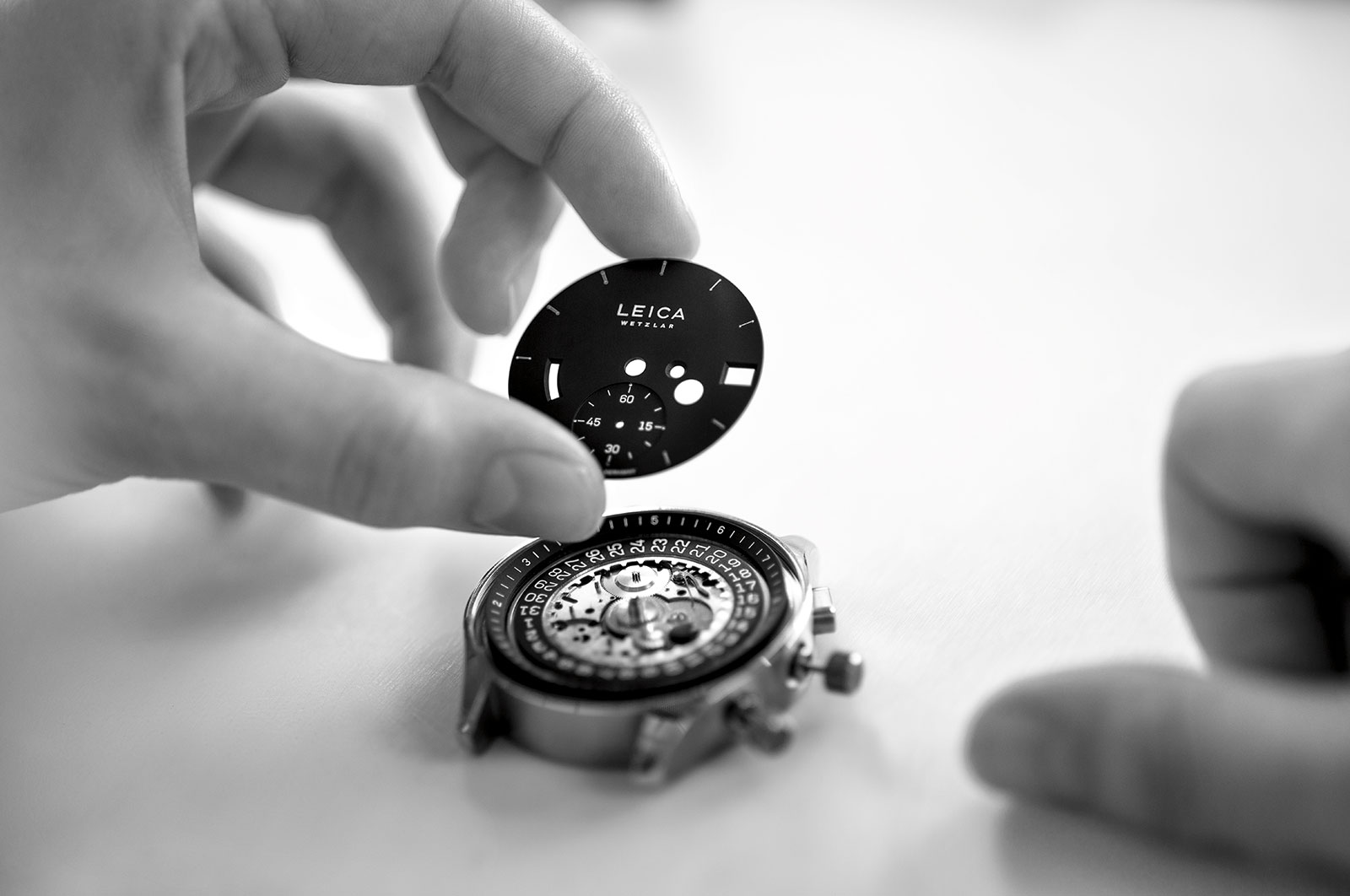 While restrained on its face, the L1 and L2 incorporates a surprising number of useful complications, thanks to a movement developed in collaboration with Lehmann Präzision. A precision engineering outfit that branched out into watches, Lehmann itself offers a range of watches powered by its own movements, which are derived from the ETA 2892.

The calibre developed for Leica, however, is exclusive to the camera maker. And Leica now assembles both movements and finished watches in its own facility located within the Wetzlar campus that is also home to its camera production. 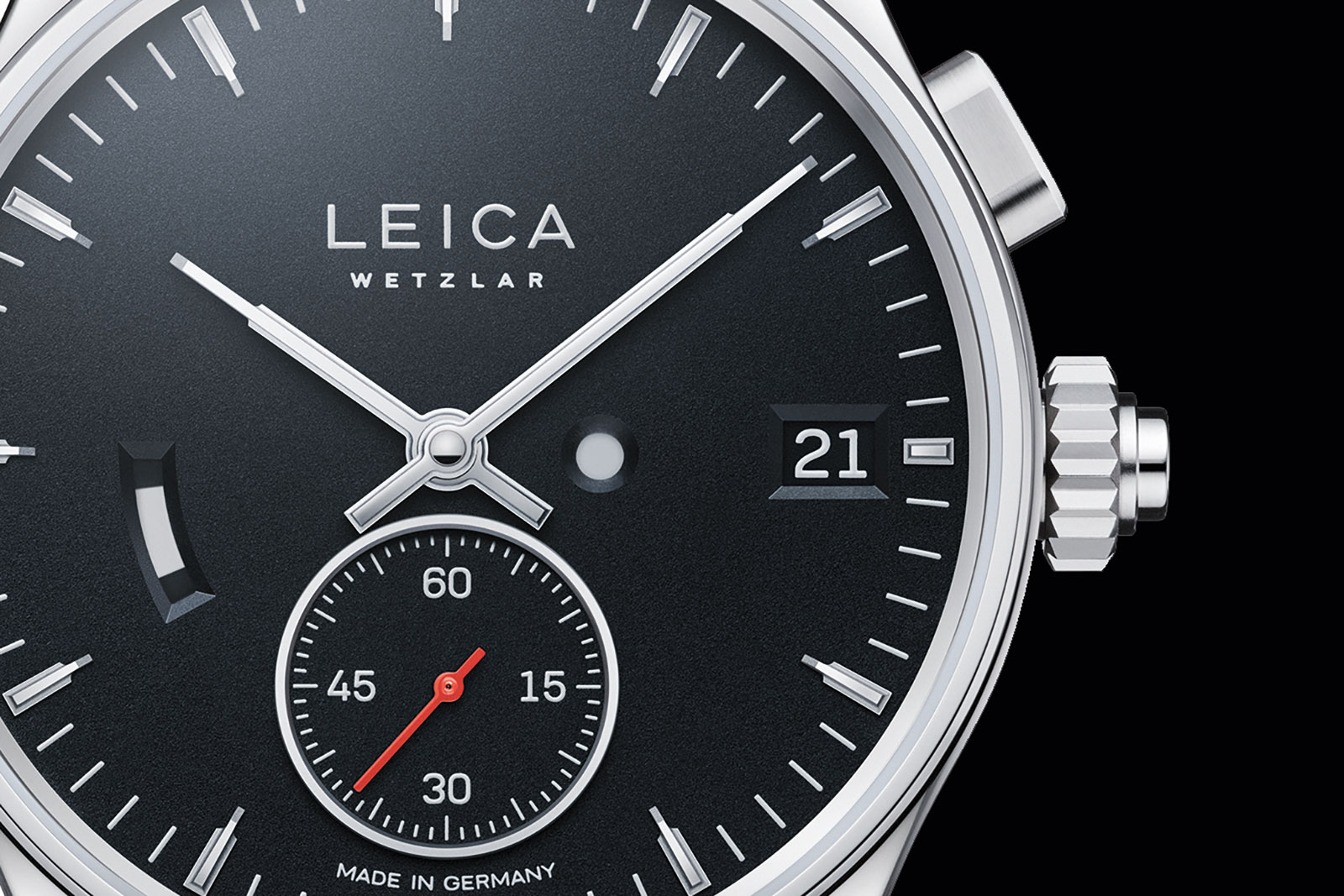 The L1 with the power reserve between eight and nine o’clock, and the crown function indicator to the right of the hands

But it is the hacking, zero-reset seconds that is more intriguing. Already an uncommon complication at this price point, the stop seconds is linked to the push crown that is inspired by the shutter-release button of a rangefinder.

Instead of the conventional pull-out motion to set the time, this crown has a co-axial button that engages the time-setting mechanism. The dot beside the central axis of the hands indicates the function selected by the push button.

The L2 has all of that, but the addition of a second time zone that takes the form of a rotating flange around the dial that shows home time. Set via the pull-out crown at four clock, it is linked to a day and night indicator just below the crown function display. 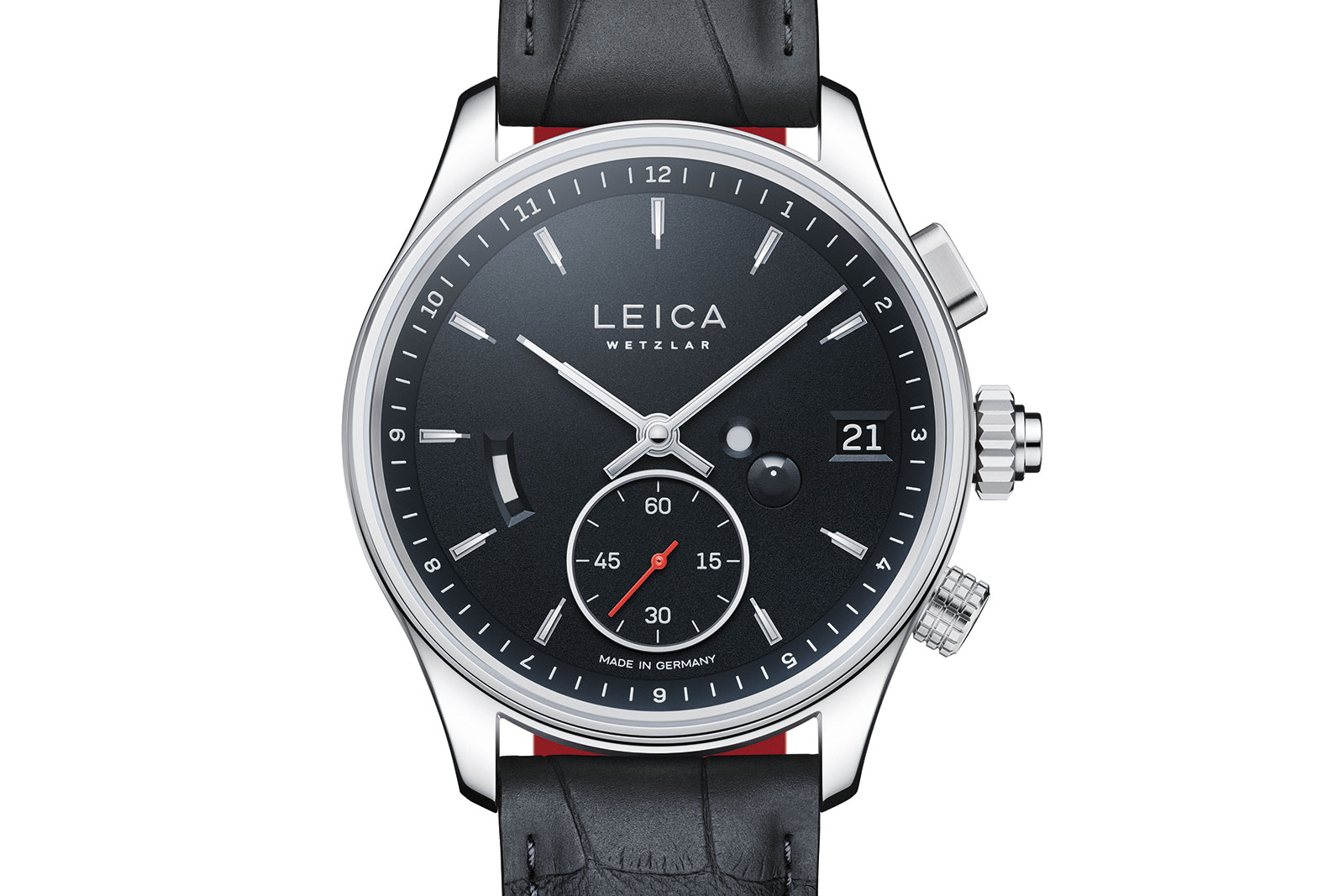 The case is steel and a largish 41 mm in diameter, but that the size is a necessity of the movement. Generously proportioned, the movement has an appealing, mechanical looking aesthetic that is not merely decorative.

Amongst other things, the visible wheel with wolf’s teeth controls the crown-function selector, while the narrow, open-worked bridge secures the going train wheels. 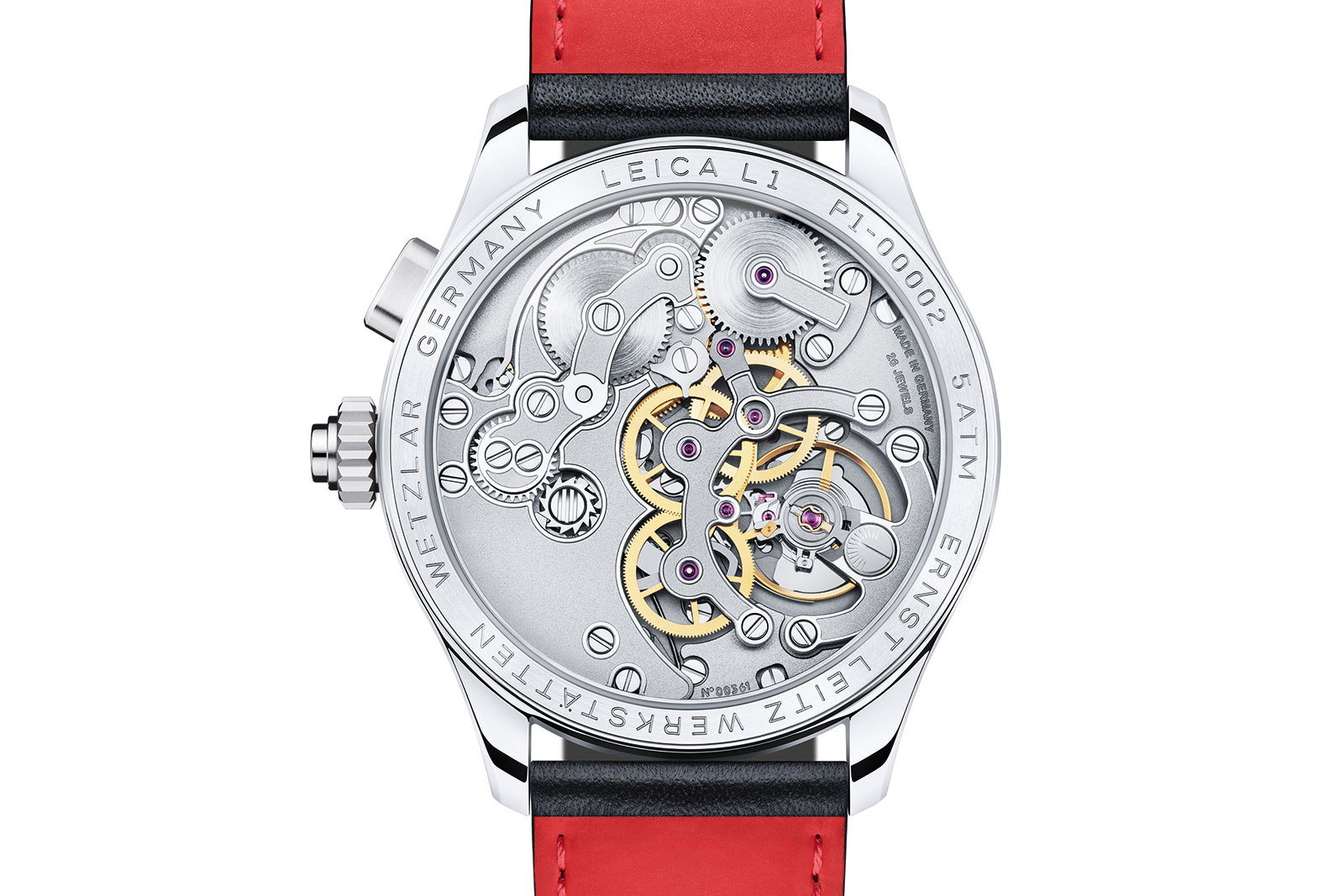 Limited edition: No, but limited production
Availability: From February 8, 2022 at eight Leica Stores around the world, including Shanghai Xintiandi, Singapore, Ginza, Vienna, Wetzlar, and Los Angeles

Euro and Singapore dollar prices include VAT and GST respectively.

Correction February 8, 2022: The power reserve is 60 hours, and not years as stated in an earlier version of the article.

Powered by a proprietary movements made in Germany.