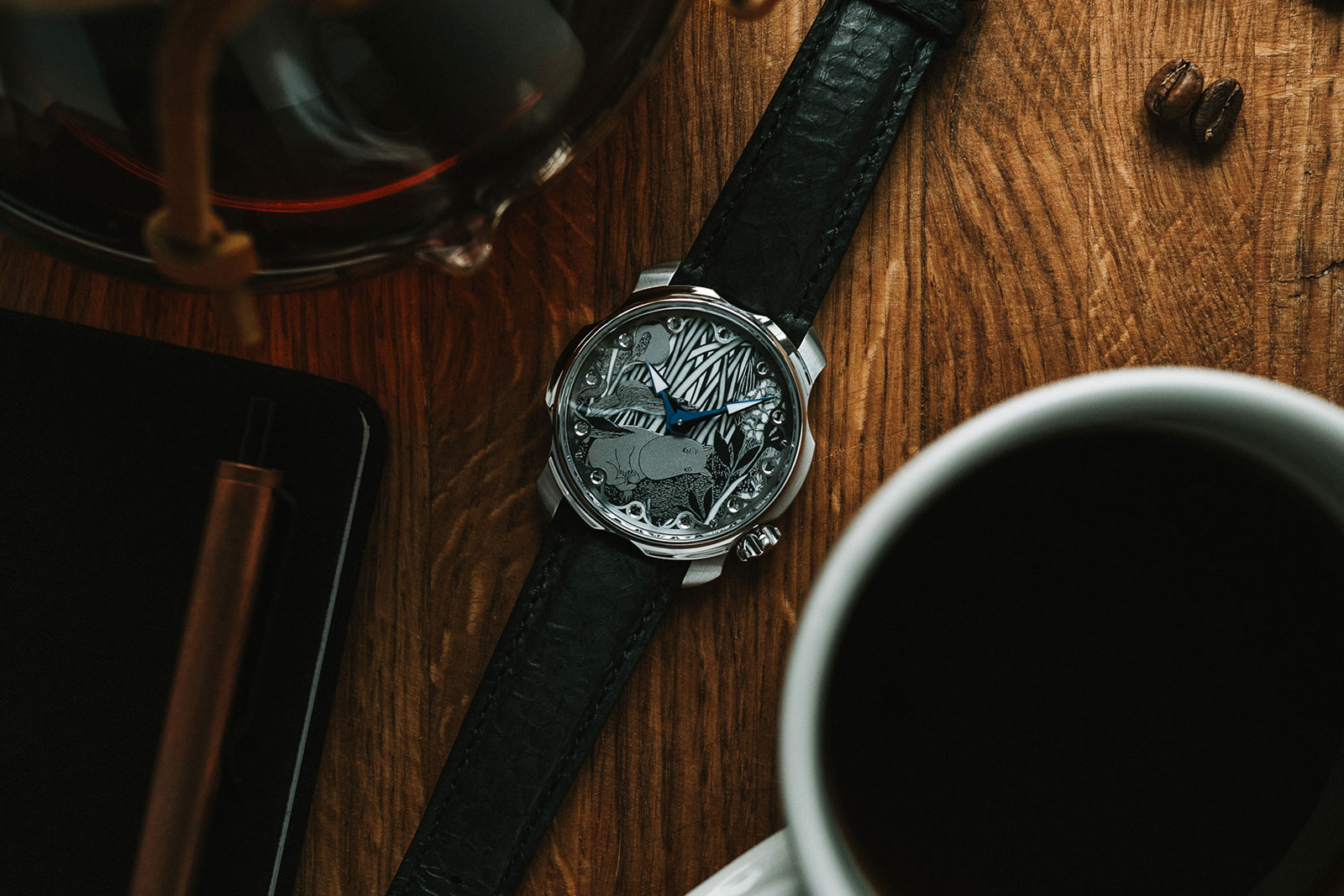 Finnish watchmaker Stepan Sarpaneva had a hit on his hands with last year’s S.U.F. Helsinki x Moomin, a limited edition made to mark 75 years of the titular Swedish comic strip about trolls. Now the watchmaker is following up with the Sarpaneva x Moomin, which is seemingly identical in terms of design but actually an entirely different watch.

Crucially, this is a Sarpaneva wristwatch, unlike last year’s Moomin edition, which was an S.U.F. Helsinki, a line of affordable watches spun off from Sarpaneva. Being a Sarpaneva, it is a higher end product, it has the decoration and finishing typical of Sarpaneva wristwatches, as well as the corresponding price. 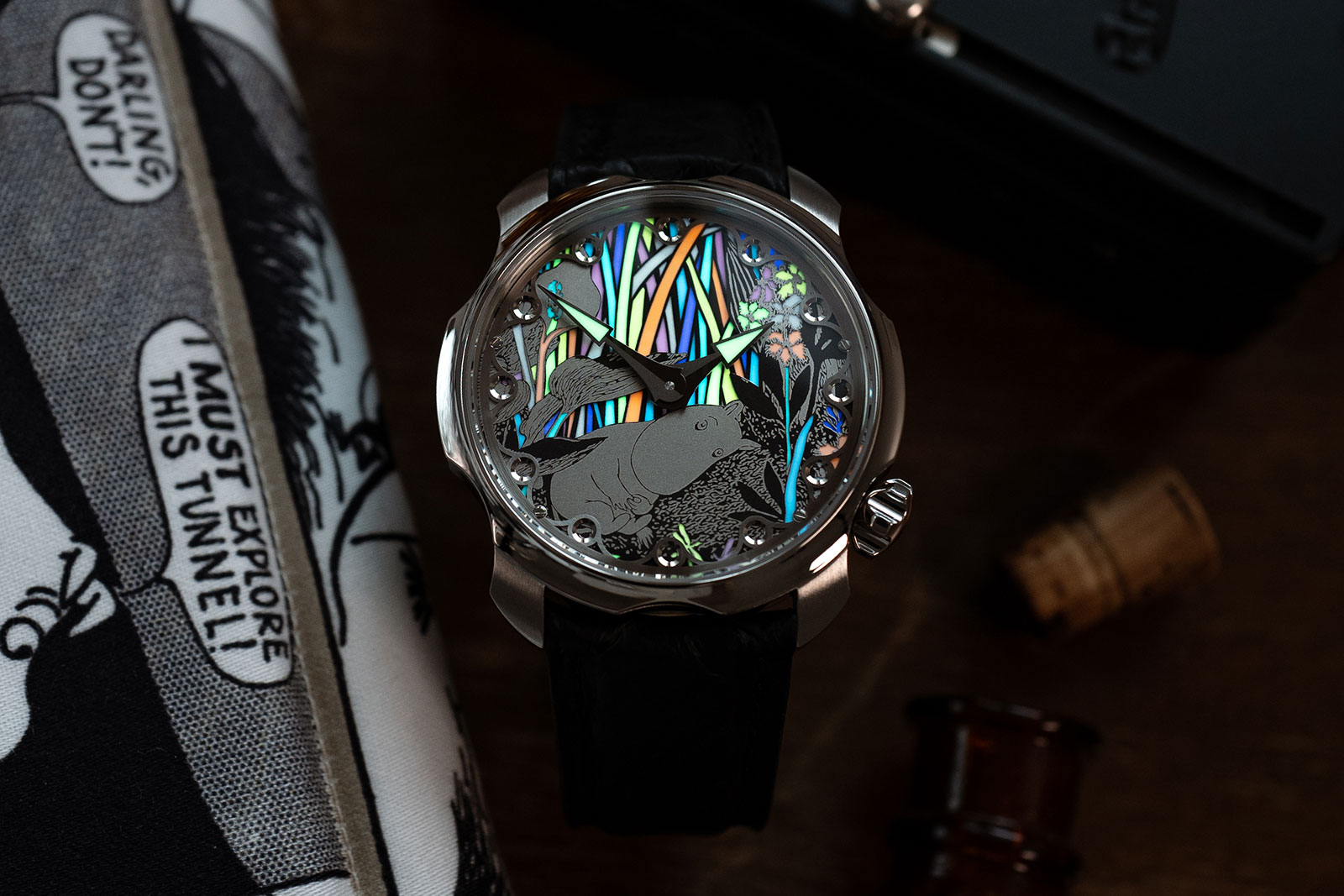 Having enjoying a brisk sellout last year, the Moomin watch making a comeback is not a surprise. Ordinarily I don’t like repeats of the same thing, but here it’s not exactly the same thing. And in fact the new Moomin watch is tangibly superior.

Sarpaneva is repeating the idea with a twist, putting the same design into a watch with better fit and finish. One obvious example of that improvement is the open-worked chapter ring around the dial, which is finished by hand with circular graining  and polished bevels. Another is the skeletonised rotor with the Sarpaneva moon “face” and solid-gold weights. 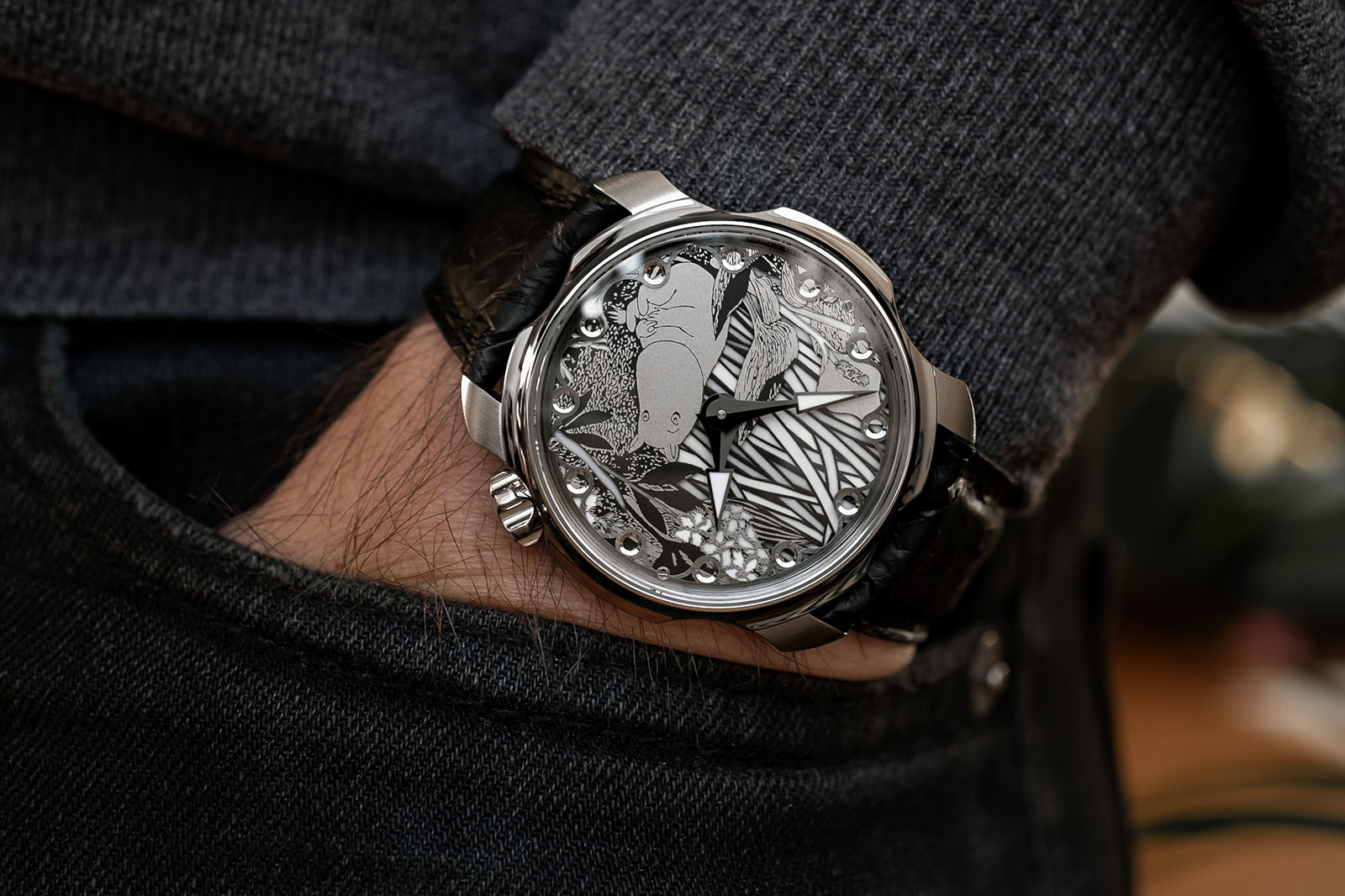 While the intrinsic quality of the watch justifies the price, I would have hoped the dial motif would be different. Even though the dial is fancier with the hand-finished chapter ring, the primary motif is identical to that of the S.U.F. edition. But that is probably explained by the fact that Mr Sarpaneva has limited say over the Moomin motif, since the intellectual property is licensed from the owners of the franchise.

At €12,000, the new Moomin watch is just over twice as expensive as the original version. The increase, however, is easily  justified by the fact that this is a Sarpaneva watch, which means it has all the quality that come with the name. 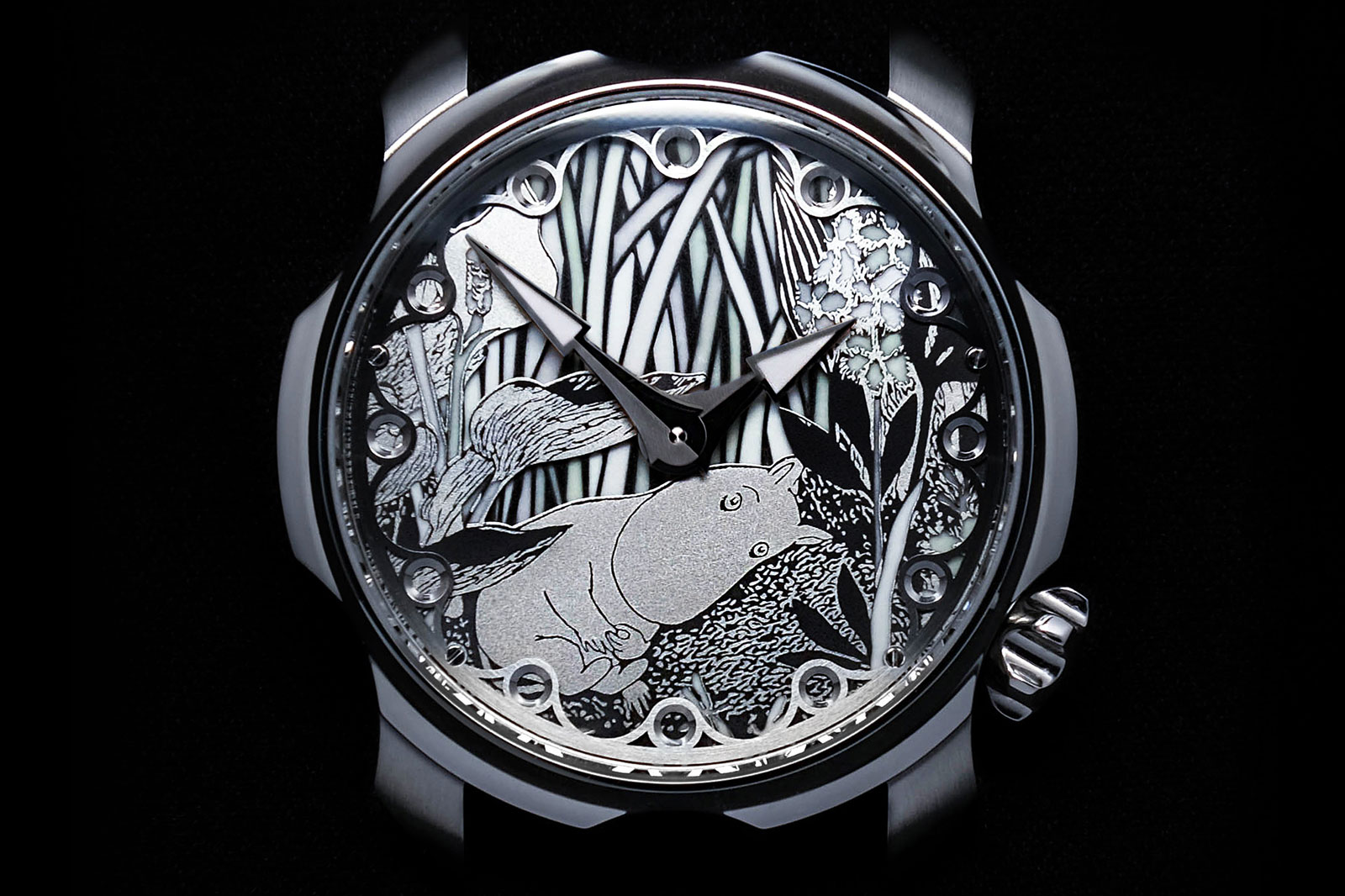 Like the first Moomin edition, the dial is the centrepiece of the watch. Depicting Moomintroll “lying in his customary place… on the green-and-yellow moss”, the dial a three-layer, skeletonised affair that’s fabricated with machines and then finished by hand.

The base layer forms the background of reeds, which are open-worked and filled with eight colours of Super-Luminova. The reeds are filled by hand at random, making the colour combination of each dial unique. 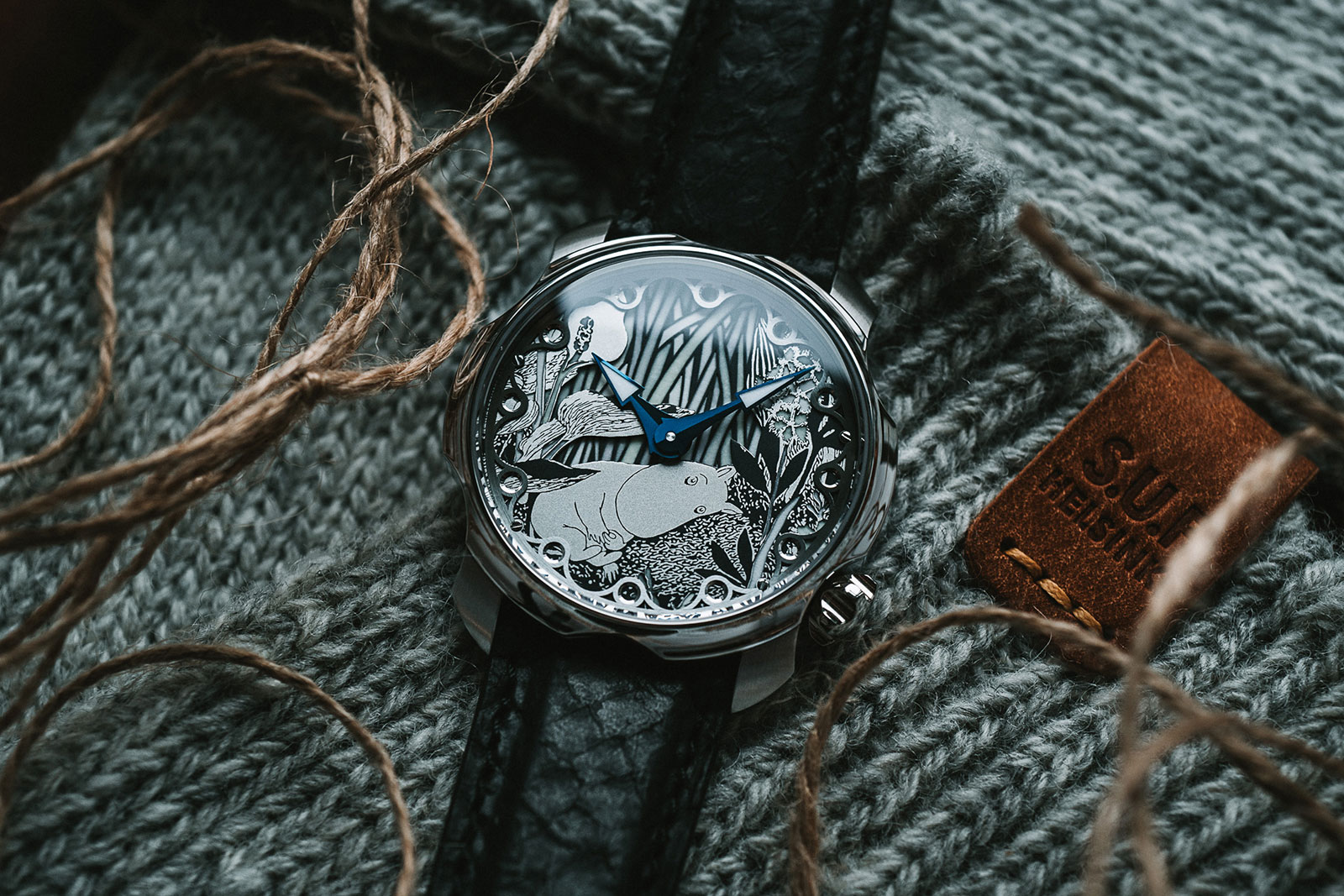 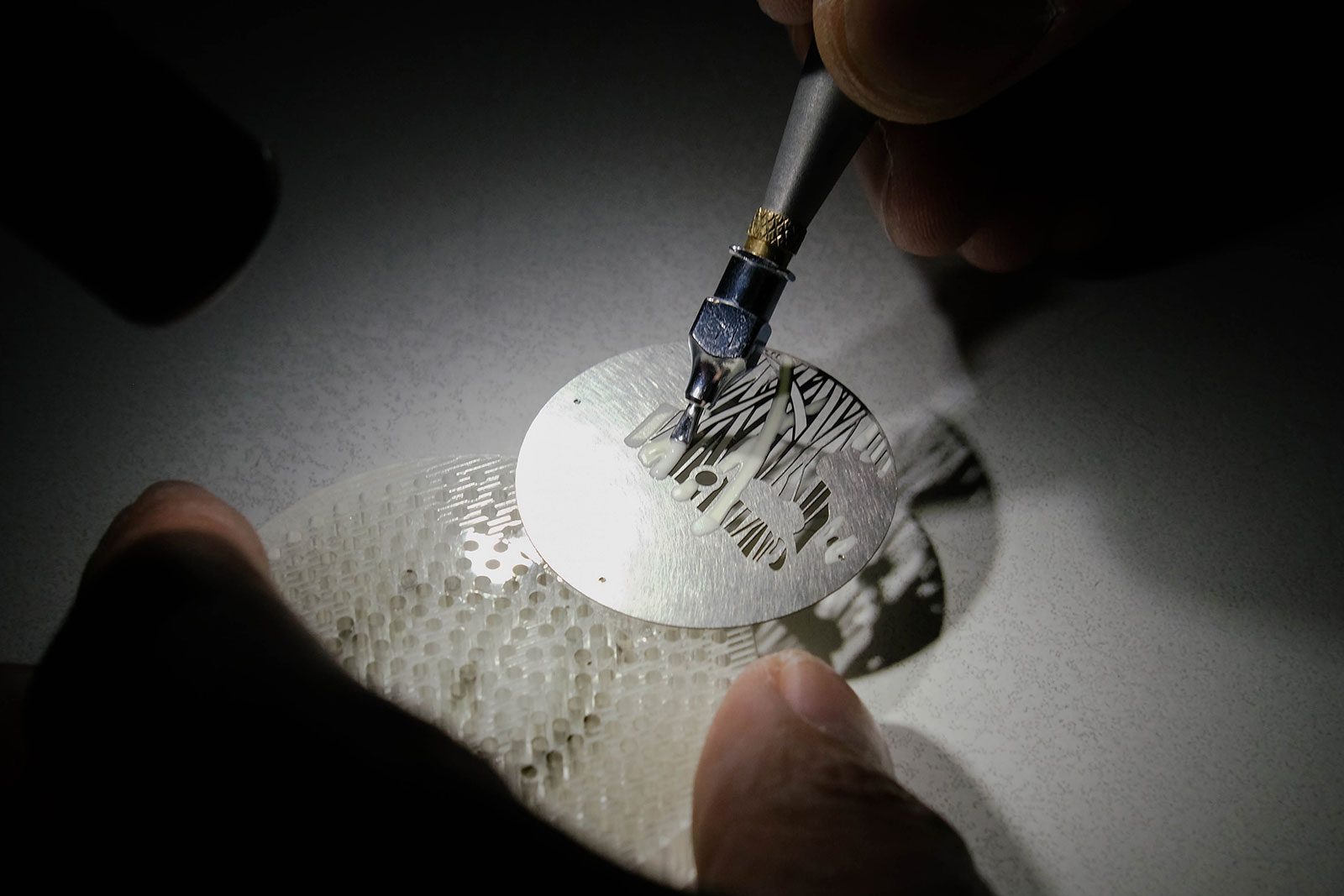 Filling the dial with Super-Luminova

Over the reeds is another open-worked section, this one with Moomintroll amidst the plants. This layer is lacquered and then laser etched to create the two-tone finish. And it’s topped with the open-worked chapter ring with the spherical hour markers. The chapter ring hand finished with circular graining on top and polished chamfers within each of the open rings. 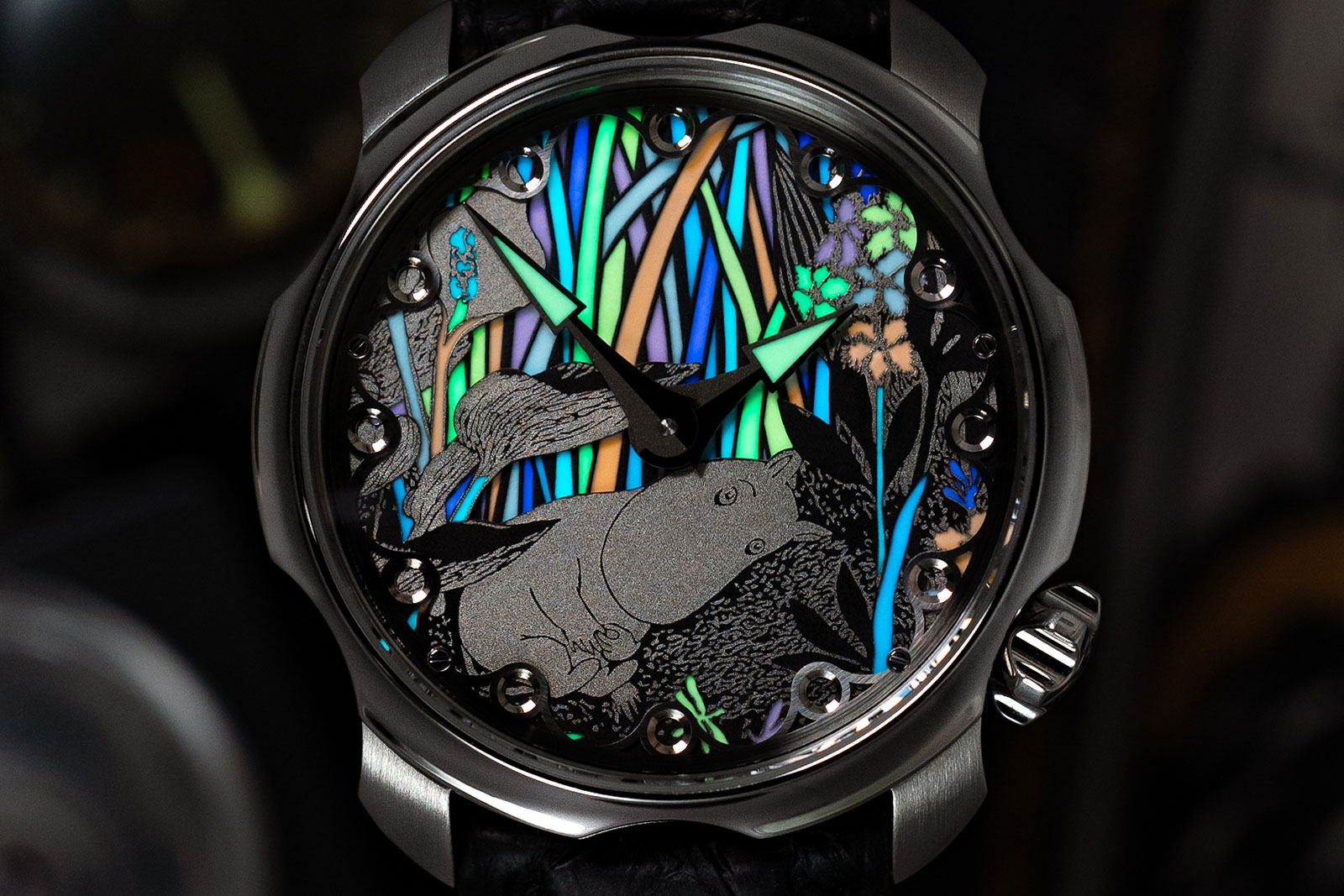 To accompany the dial are four choices for hands: rhodium-plated steel, flame blued, rose-gold plated, or black coated. The edition is limited to 100 pieces, with 25 in each type of hands. 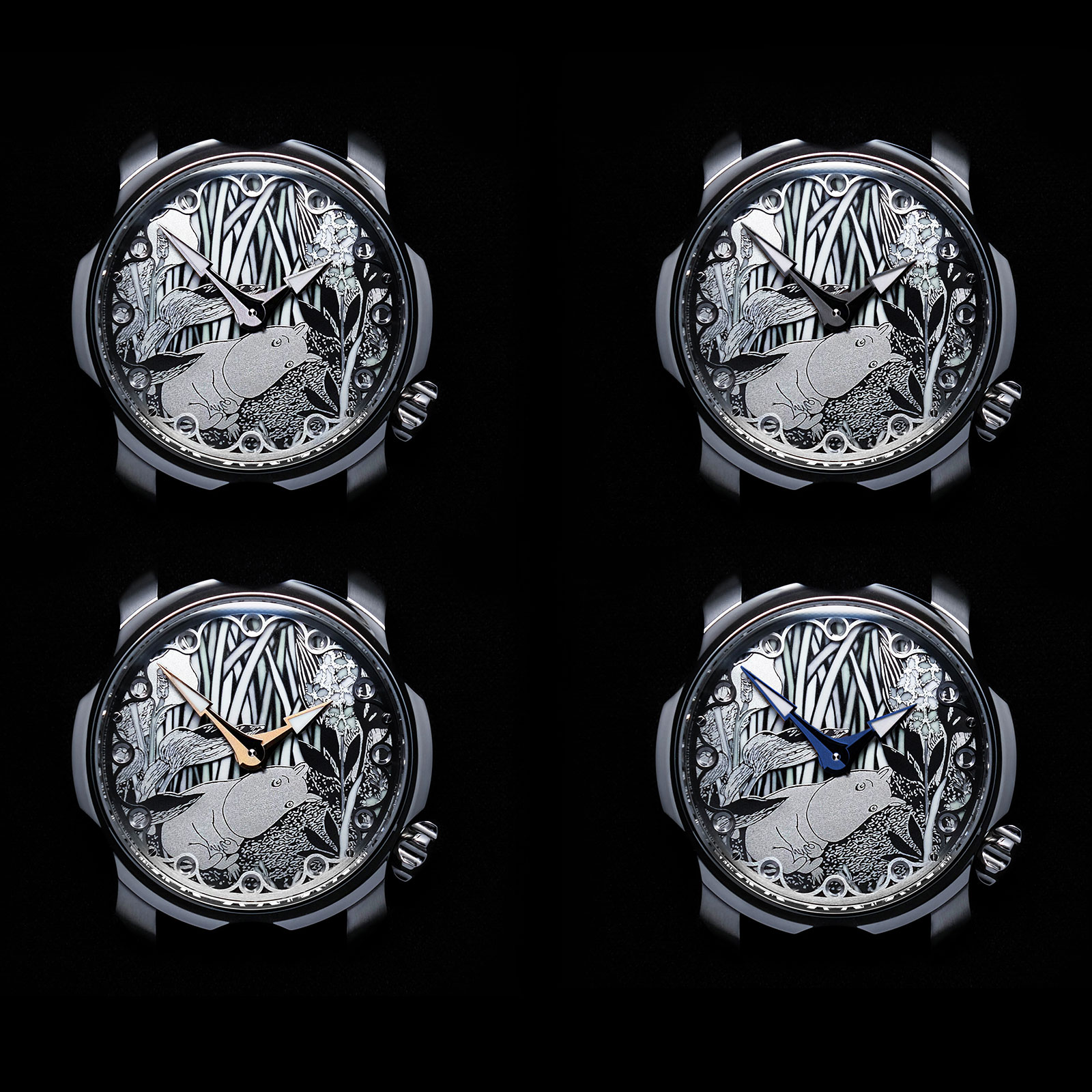 The new Moomin edition utilises the standard Sarpaneva watch case, which has a distinctive shape characterised by wide notches in the bezel. The case is finished with both polished and brushed surfaces, even on the unusual planes like the concave bezel and notched case sides.

It’s 42 mm in diameter but relatively thin at 11.4 mm high. And like all Sarpaneva and S.U.F. cases, it is made of Finnish stainless steel, specifically the SUPRA 316L/4435 alloy made by local steelmaker Outokumpu. 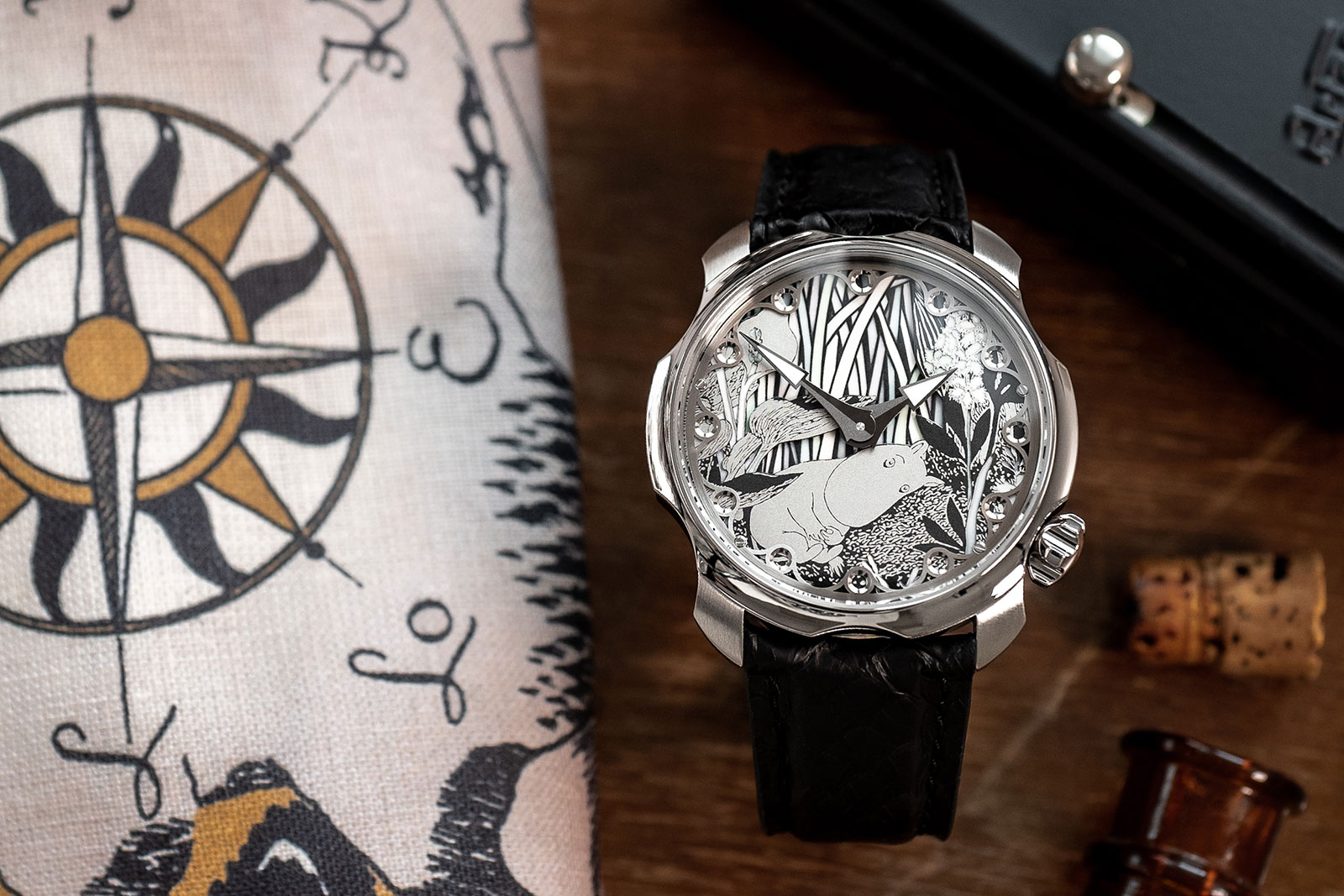 The movement within is the same Soprod A10 found in the S.U.F. Moomin, but it has been elaborated upon, unlike the calibre in the S.U.F. version that is essentially stock. For one the movement itself has been finished with perlage on the bridges and base plate. 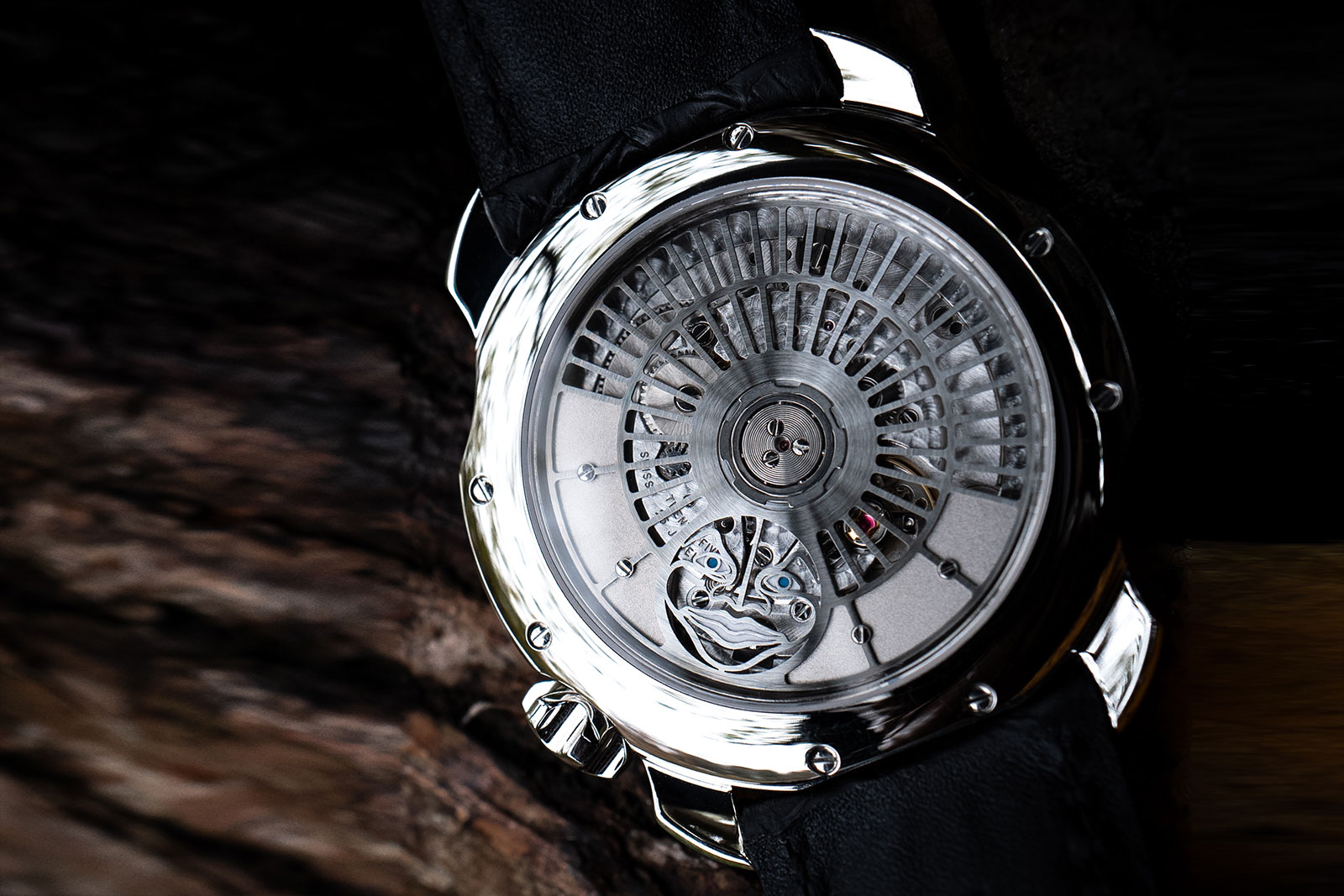 But the highlight is the full rotor, which is stainless steel and skeletonised. It bears the trademark Sarpaneva moon “face” emblem, which is flanked by a pair of white gold plates that act as weights for the rotor.

And the rotor has naturally been lumed to match the dial, with the eyes and lips of the moon “face” painted with Super-Luminova. 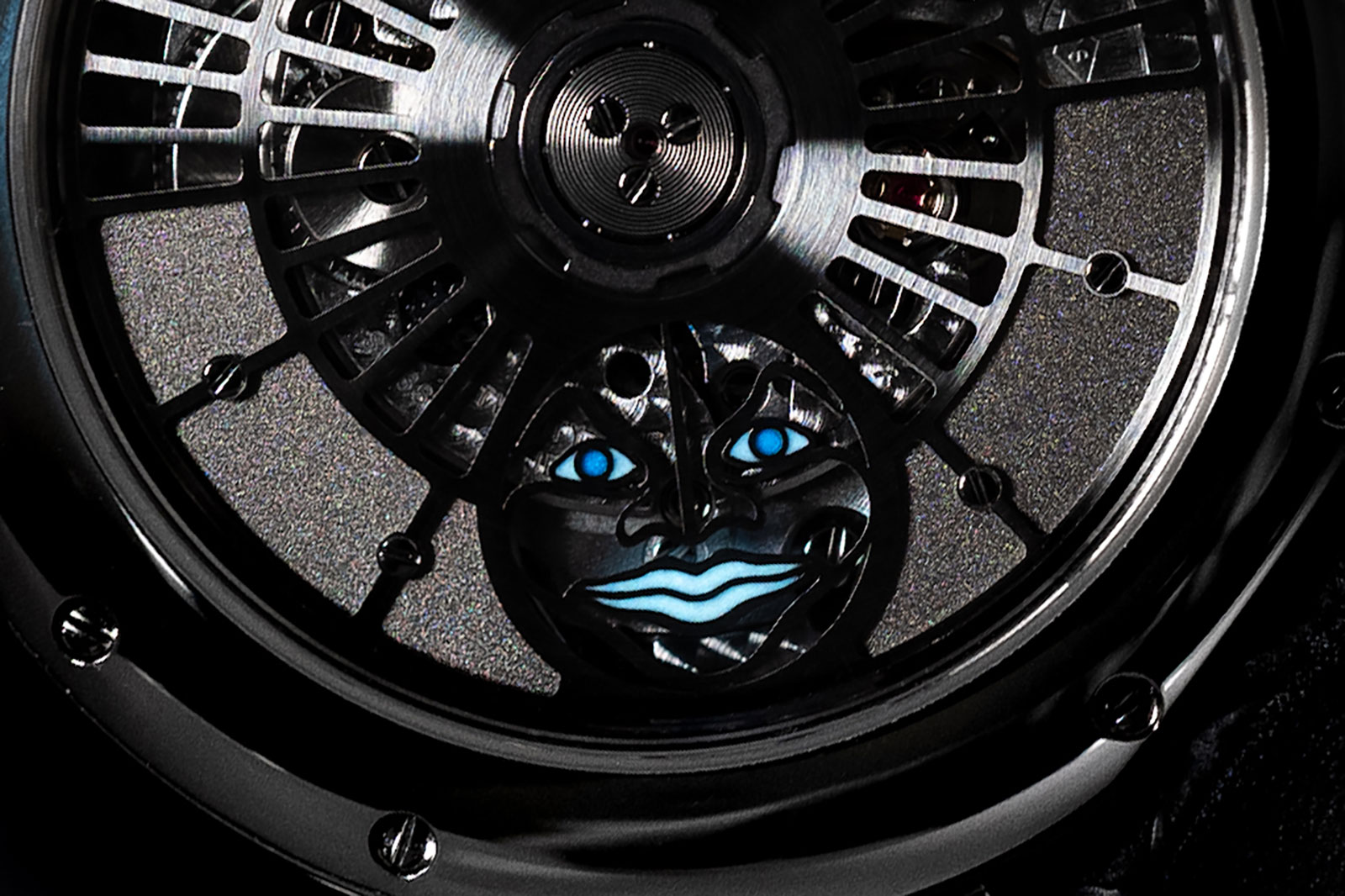 Limited edition: 100 pieces, with 25 in each colour
Availability: Direct from S.U.F. Helsinki
Price: €12,000 before taxes

The yellow henchman are back.