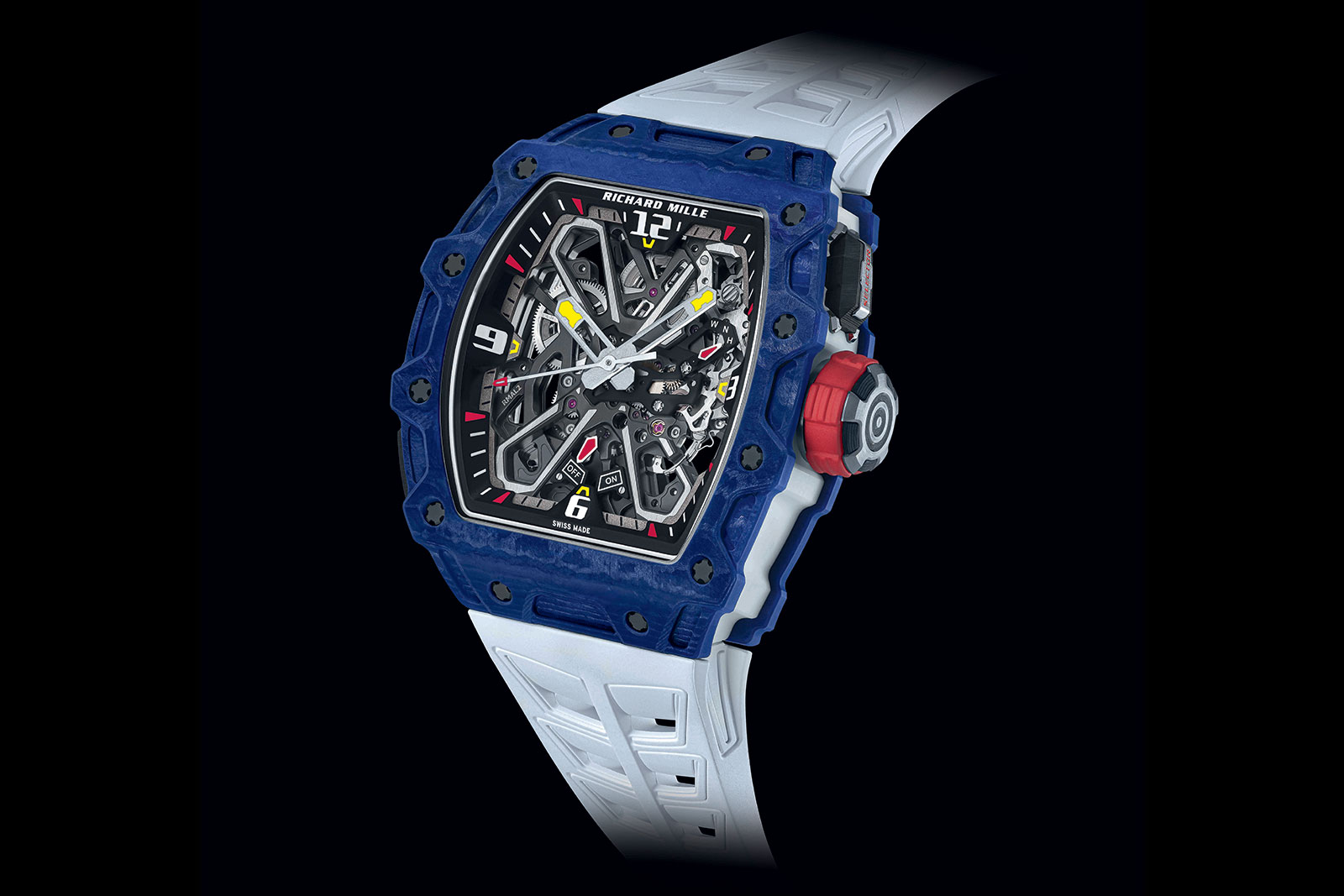 Unquestionably the preeminent maker of exotic – and ultra-luxury – sports watches, Richard Mille has just taken the covers off a simple but intriguing watch, the RM 35-03 Automatic Rafael Nadal.

Like earlier watches made for the Spanish tennis player, the RM 35-03 incorporates technical features to cater to the intense nature of the game – at least the way Mr Nadal plays tennis. And in this instance it’s a rotor with variable winding modes. As a result, winding can be halted during a game, preventing excess wear on the winding mechanism. 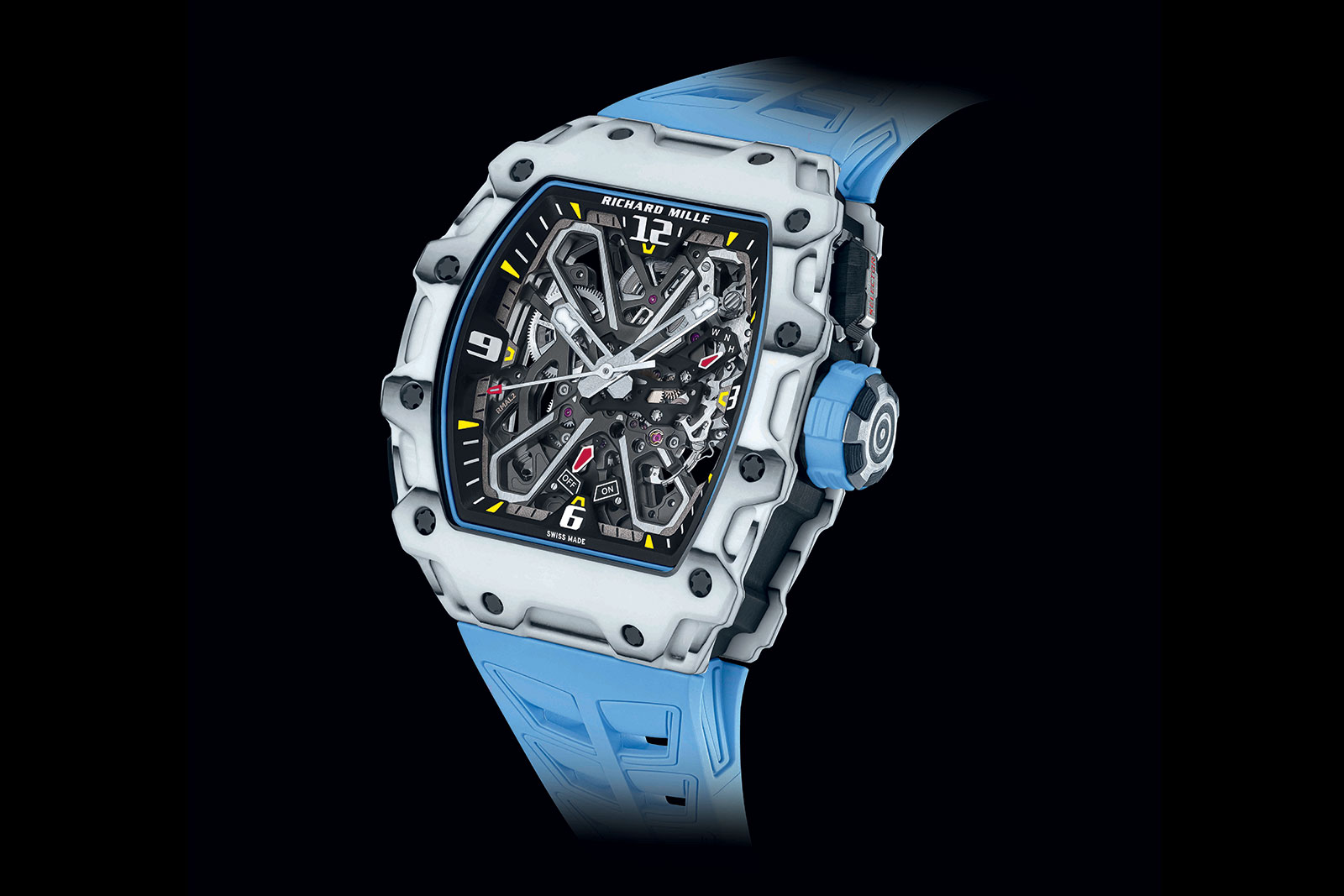 The RM 35-03 is a time-only watch – it lacks a tourbillon unlike the better-known RM 27 Nadal  – but it has all the qualities that makes it a Richard Mille, most notably the lightweight, tonneau-shaped case in brightly coloured carbon composite along with a skeletonised dial.

It’s a look that screams Richard Mille, and also a signifier of wealth and status, since the watch is hard to get and also extremely expensive for a time-only. But fortunately the RM 35 does possess technical qualities that make it interesting despite being a “hype” watch. 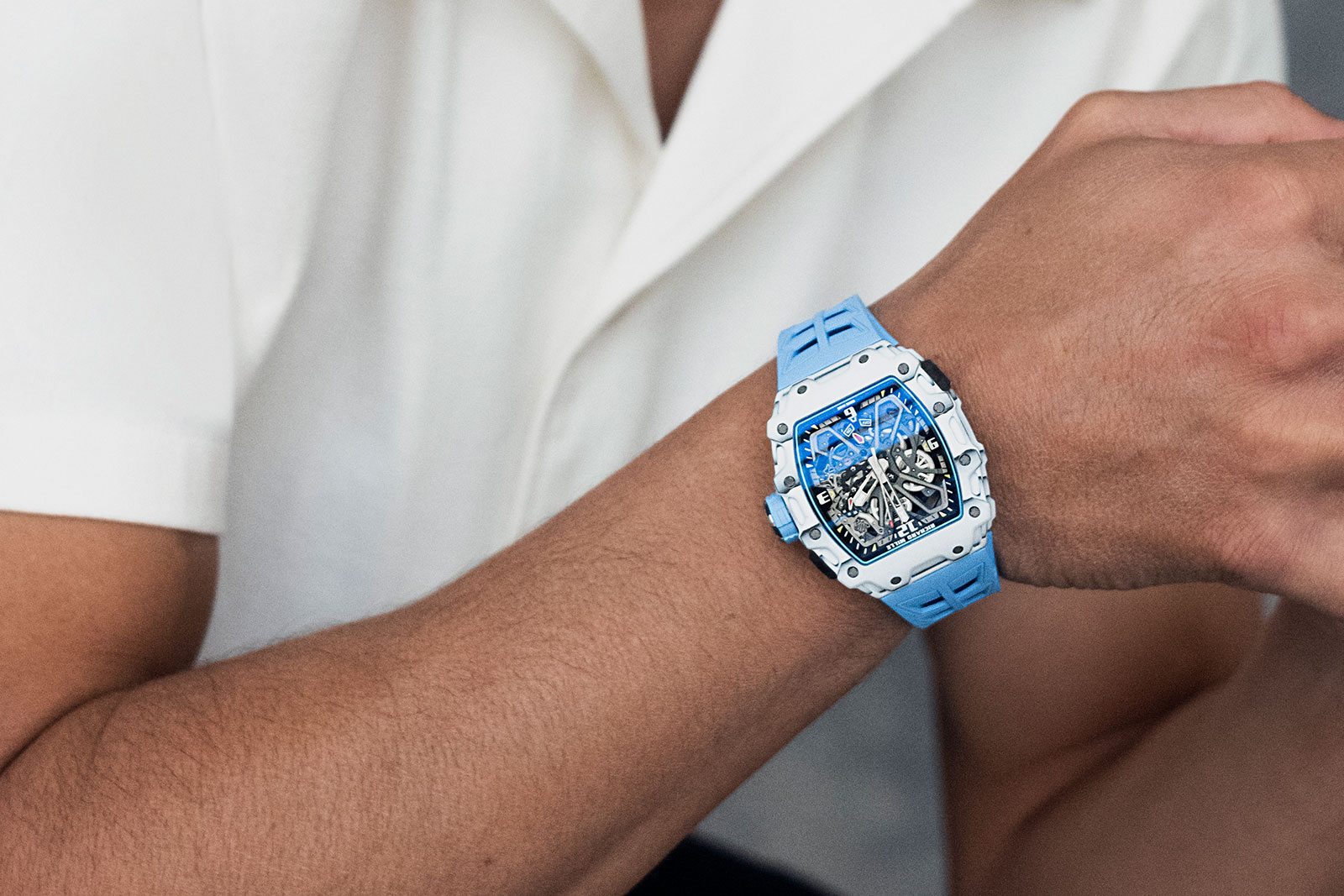 This version has the front and back case plates in white Quartz TPT and Carbon TPT, with a case middle in Carbon TPT 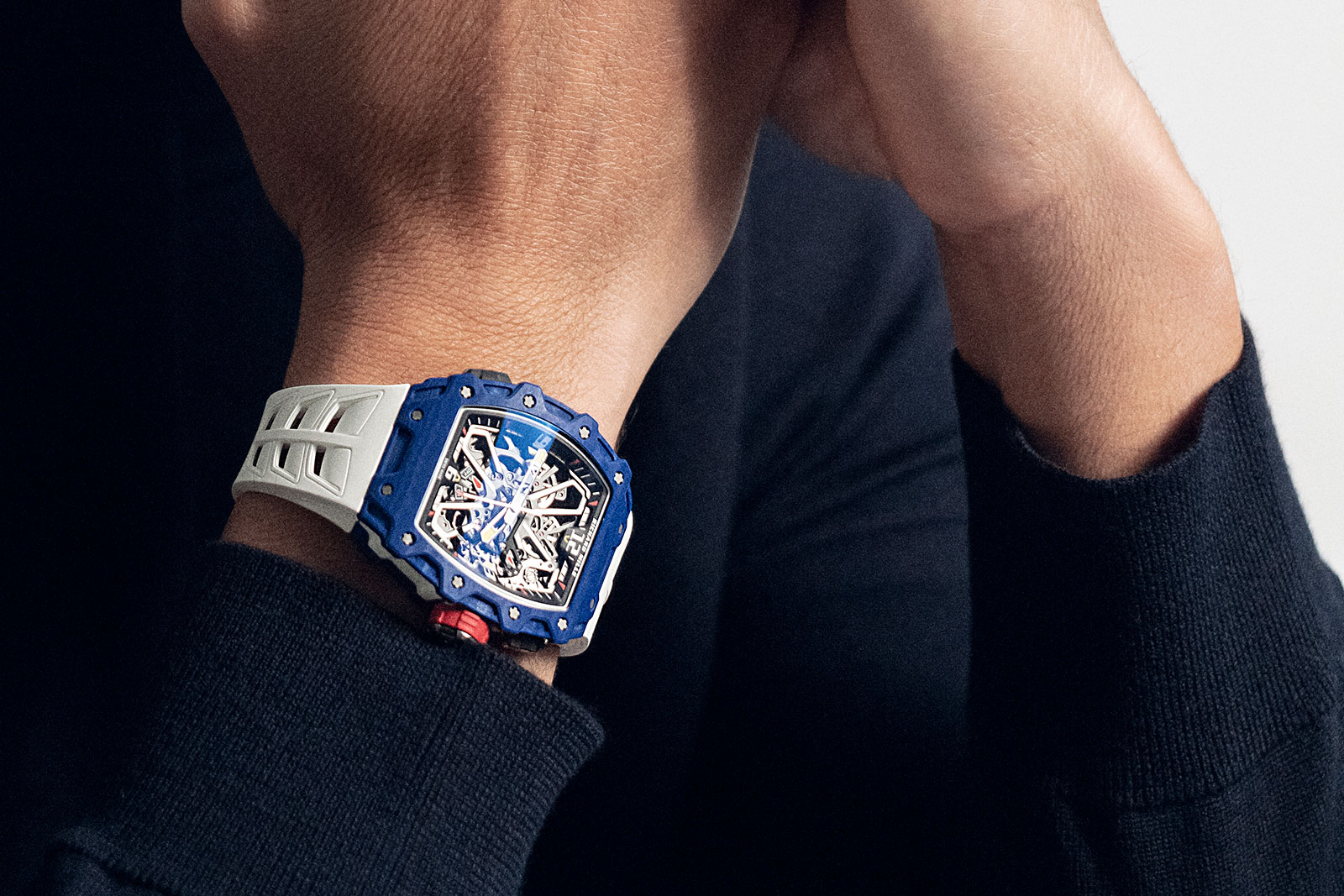 A second variant with the entire case in Quartz TPT

The highlight of the RM 35-03 is the patented, “butterfly” rotor, which is essentially comprised of two halves that can be rearranged – thanks to a smartly simple mechanism – in order to vary the winding efficiency.

Priced at US$220,000, the RM 35-03 is pricey for a watch without complications to say the least. But it is also affordable in Richard Mille terms, though retail prices are usually a moot point for such watches since availability is short and wait lists are long. 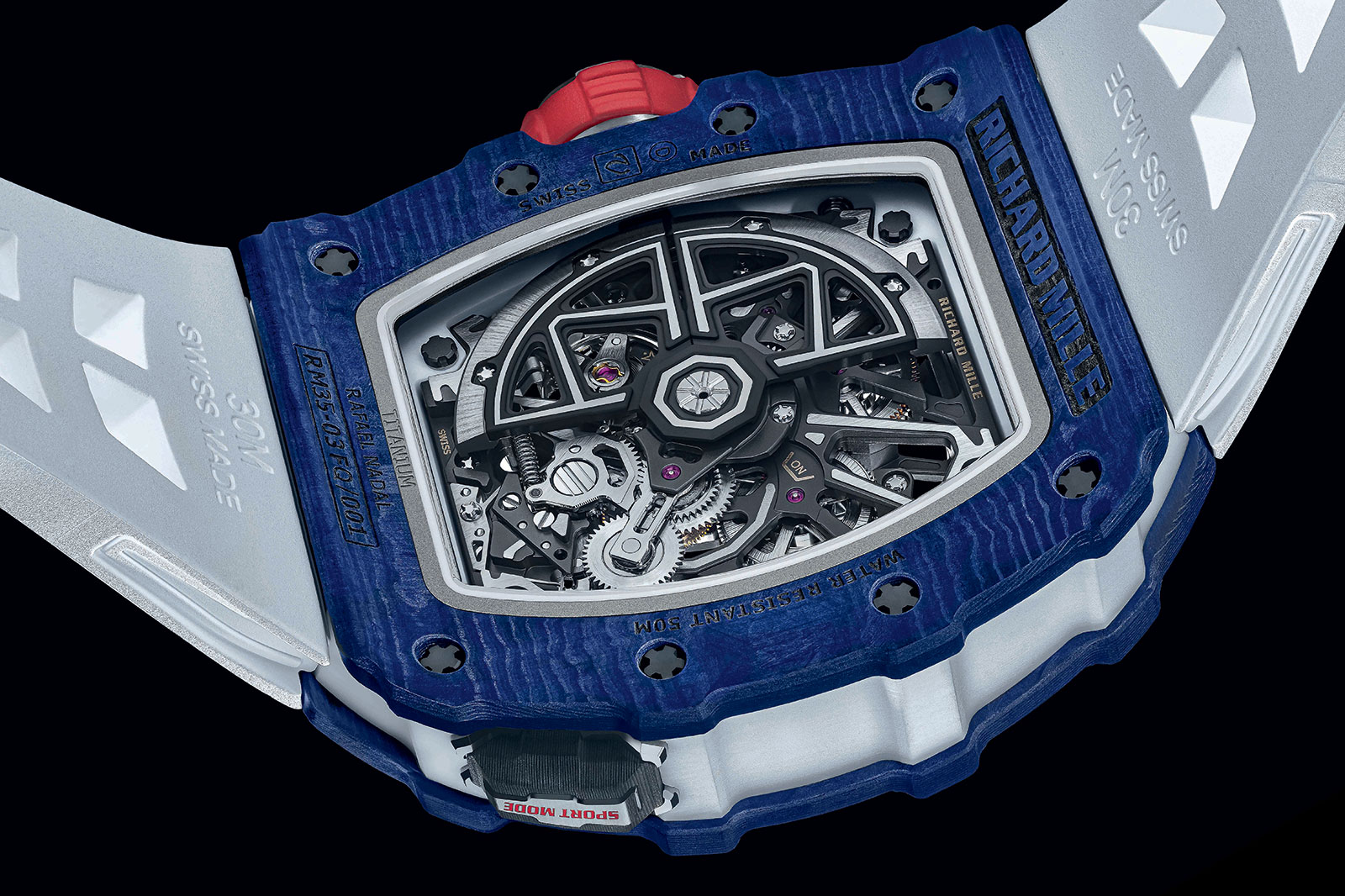 The butterfly rotor in regular mode with the two halves closed

Self-winding wristwatches are typically equipped with a slipping-bridle mainspring, meaning the coil of the spring slips against the inside wall of the barrel when it is fully wound, preventing over-winding that might break the spring.

While this slipping mechanism a simple and effective set up, it does have a minor downside – continual slipping creates wear and tear as the spring scrapes the inside of the barrel (which is usually well greased), creating metal shavings within the barrel. That’s exacerbated with excessive winding, when the rotor turns “at full speed when the watch is worn by someone practicing a sport” in the words of the brand. 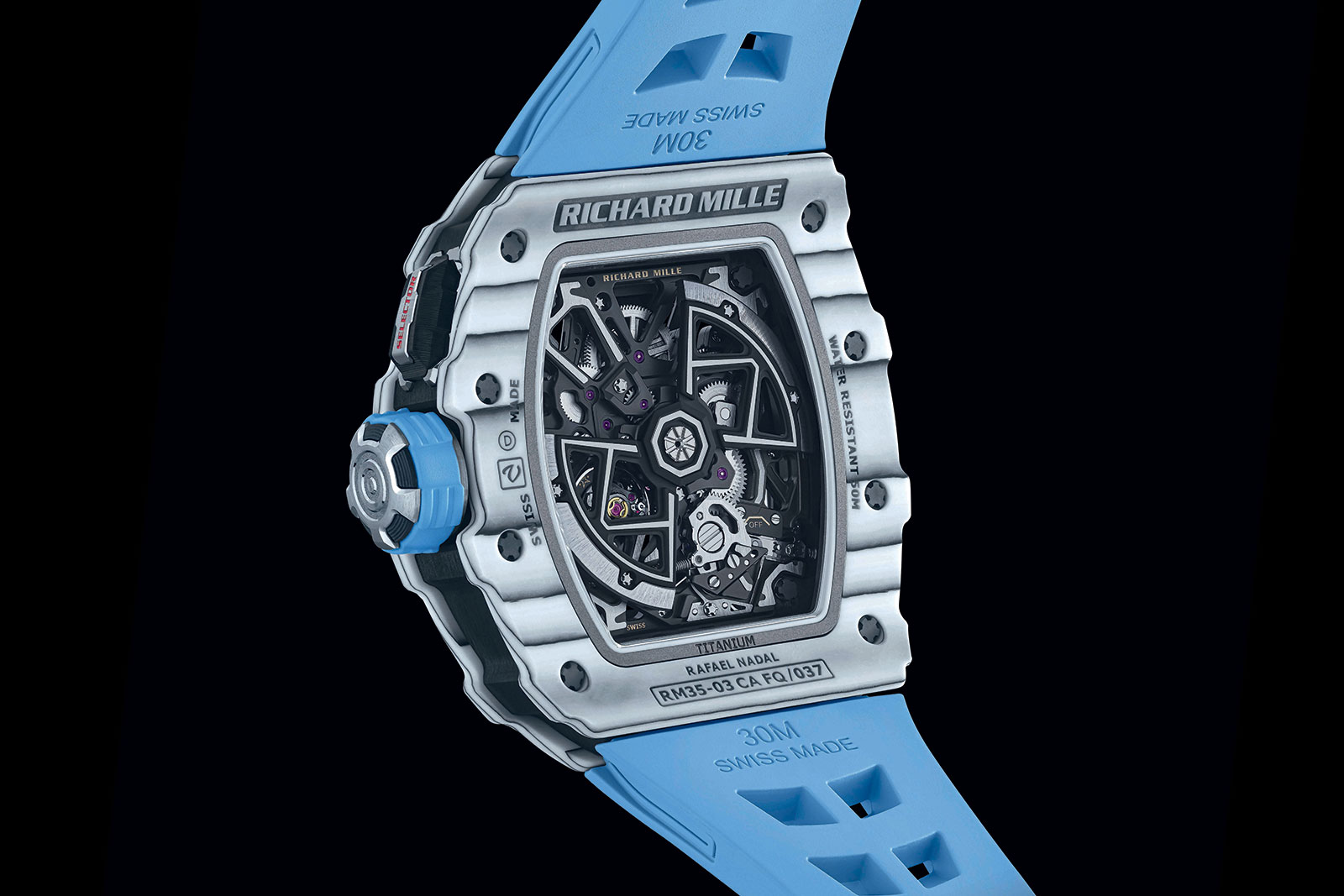 The butterfly rotor in Sport Mode, where the halves are spread symmetrically around the central the axis

Richard Mille’s solution to the problem is intuitive: a rotor with variable geometry that alters its centre of gravity, effectively changing the rate of winding along a scale from zero to maximum. So when the watch is worn during extreme activities, winding is stopped altogether.

Notably, this feature can be set by the wearer. “Sport Mode” for rotor can be easily activated via a pusher at seven o’clock on the case. This activates a series of gears that alter the shape of the winding mass, dubbed the “butterfly” rotor by the watchmaker. 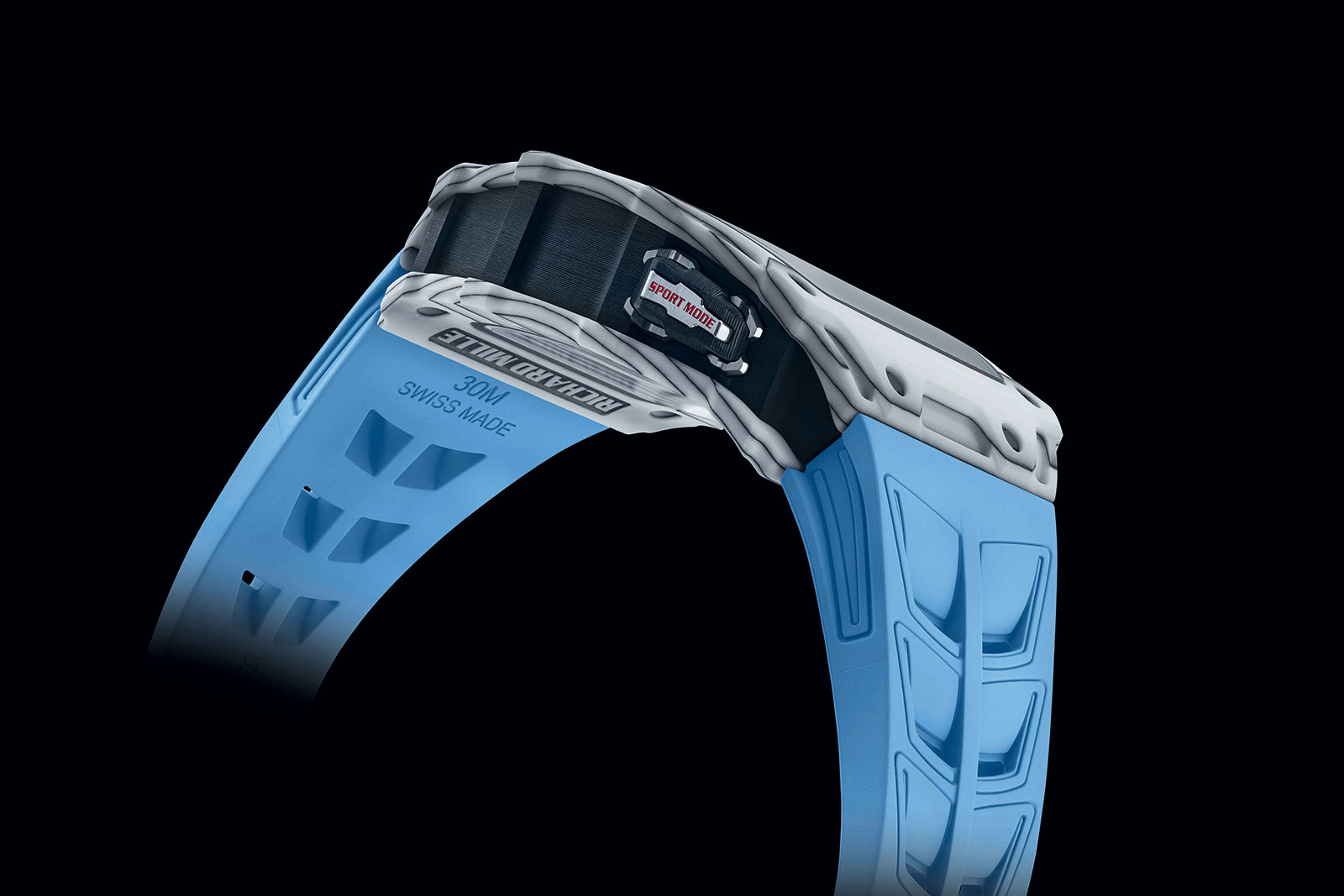 The mechanics behind the butterfly rotor looks simple at a glance, but are intriguing. The rotor consists of two halves that are indirectly coupled via intermediate wheels geared in an overall 1:1 ratio. Thus, the two halves rotate together at the same speed.

The wheels pass through a pivoting lever, which acts as a mechanical “differential”. When this lever is rotated, it mechanically induces an offset within the gearing of the two rotor halves, therefore pivoting the two halves to the “open” position – the heart of of the ingeniously elegant mechanism.

The lever itself is controlled by a spring-loaded toggling cam that’s actuated by the “Sport Mode” pusher. When the pusher activates Sport Mode, it releases the spring-loaded cam, which in turn rotates the pivoting lever – spreading the two rotor halves apart symmetrically and putting them in perfect balance. This makes the rotor less susceptible to the motion of the wrist – since both sides of the rotor are now equally weighted – and thus minimises winding of the mainspring. 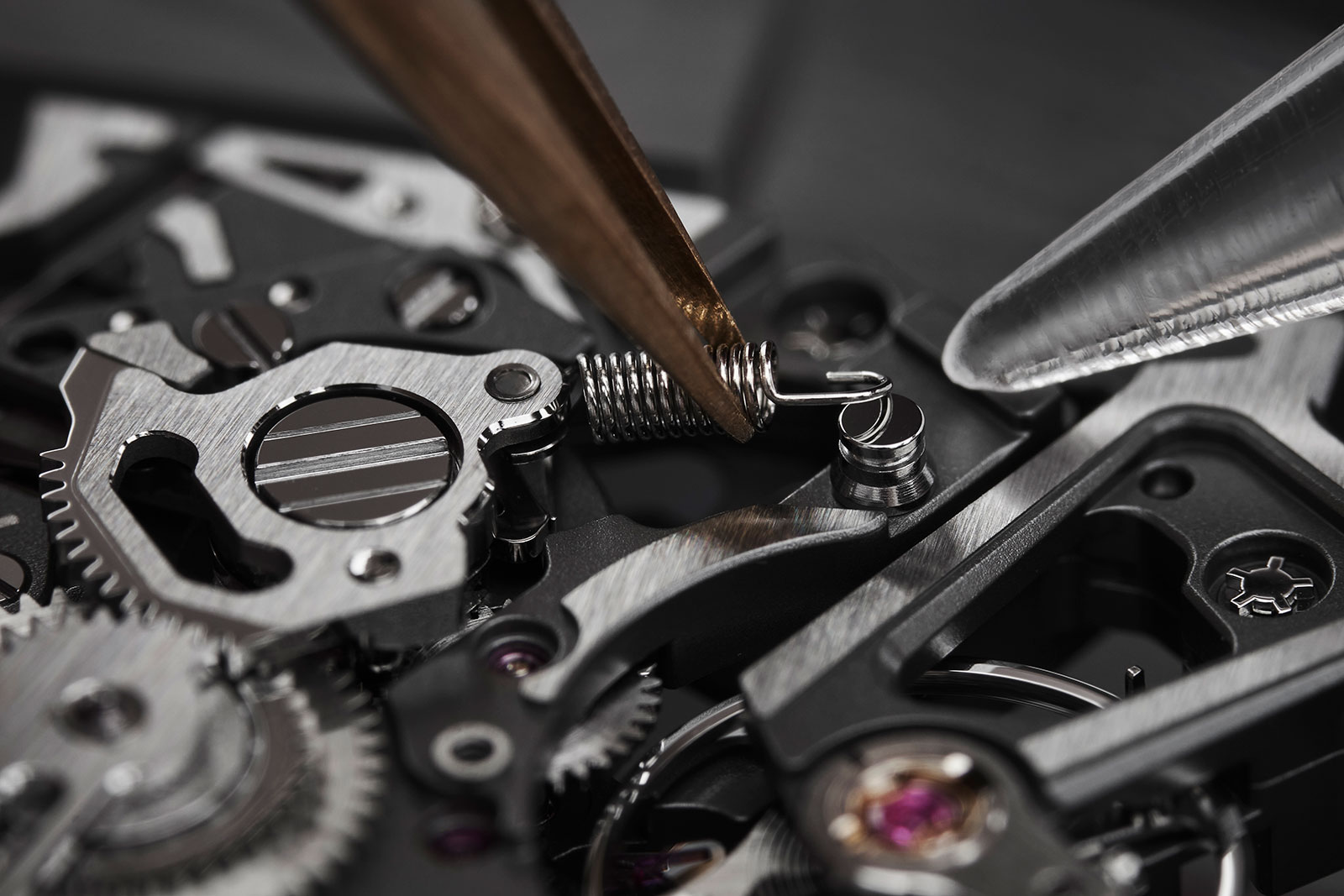 And when Sport Mode is deactivated with the pusher, the cam is cocked back into the spring-loaded position, which also resets the pivoting lever back to its original position. This causes the two halves of the rotor to close in on one another, thus restoring the full winding efficiency of the rotor. 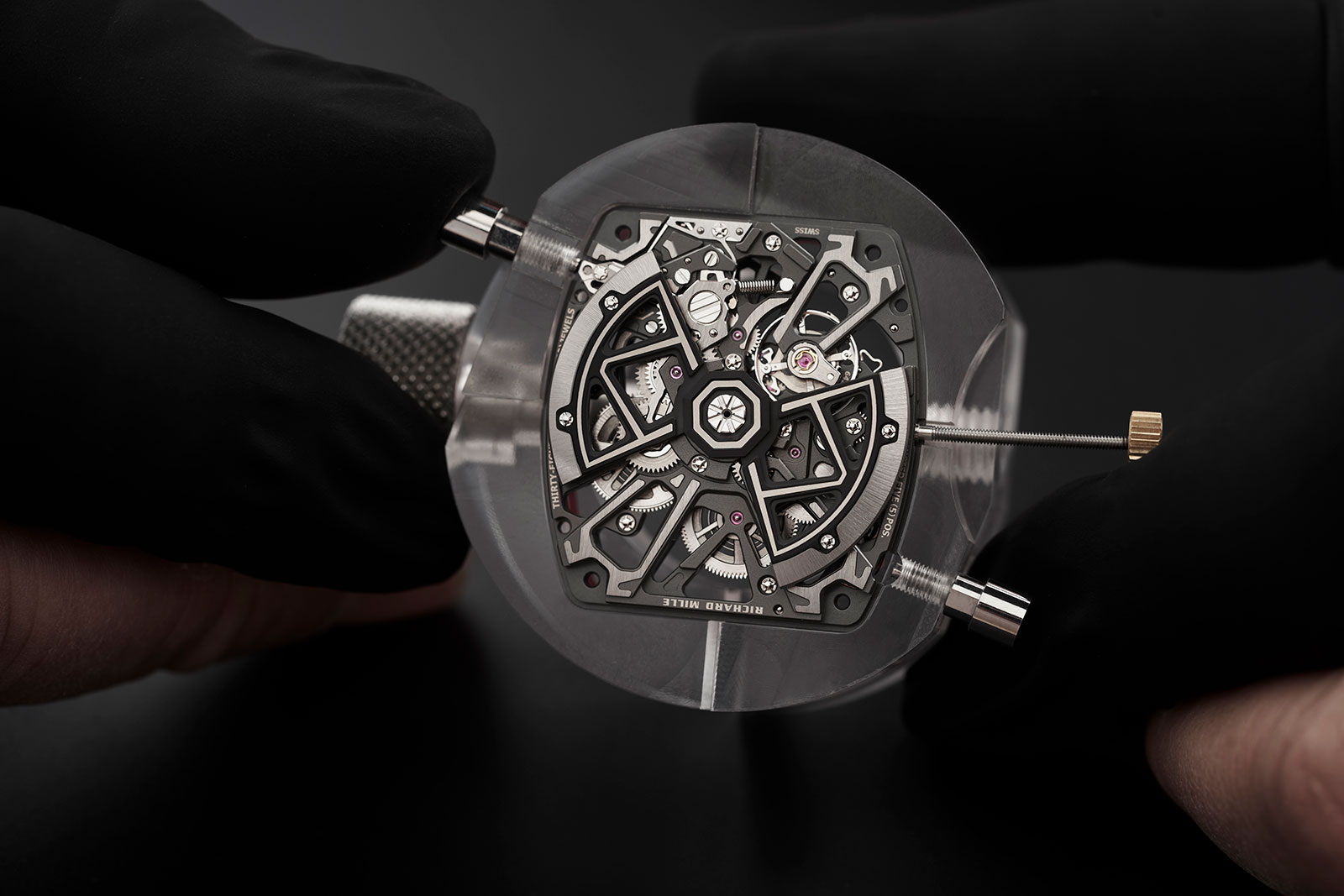 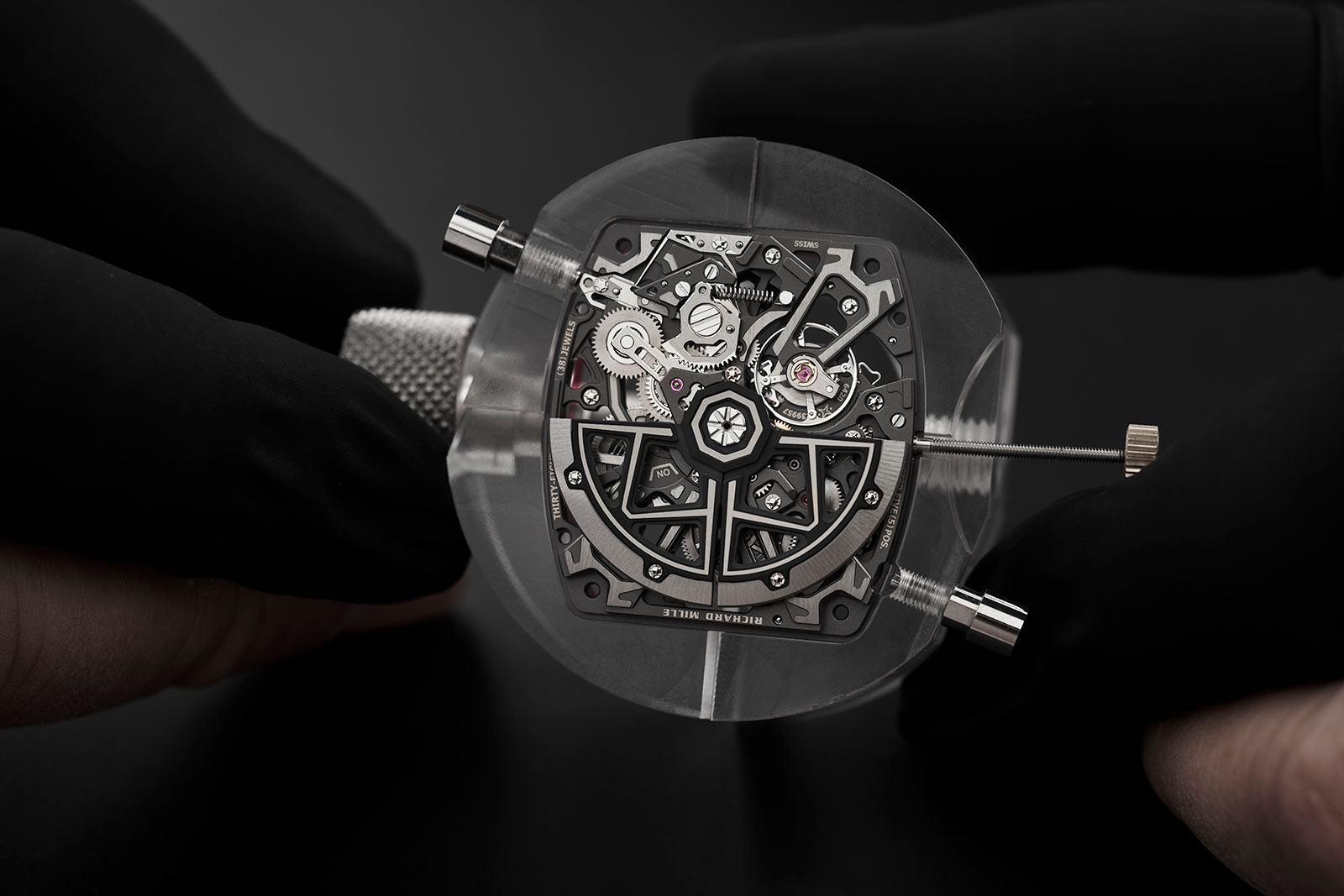 Correction December 21, 2021: An updated explanation of the rotor variable winding mechanism is provided.