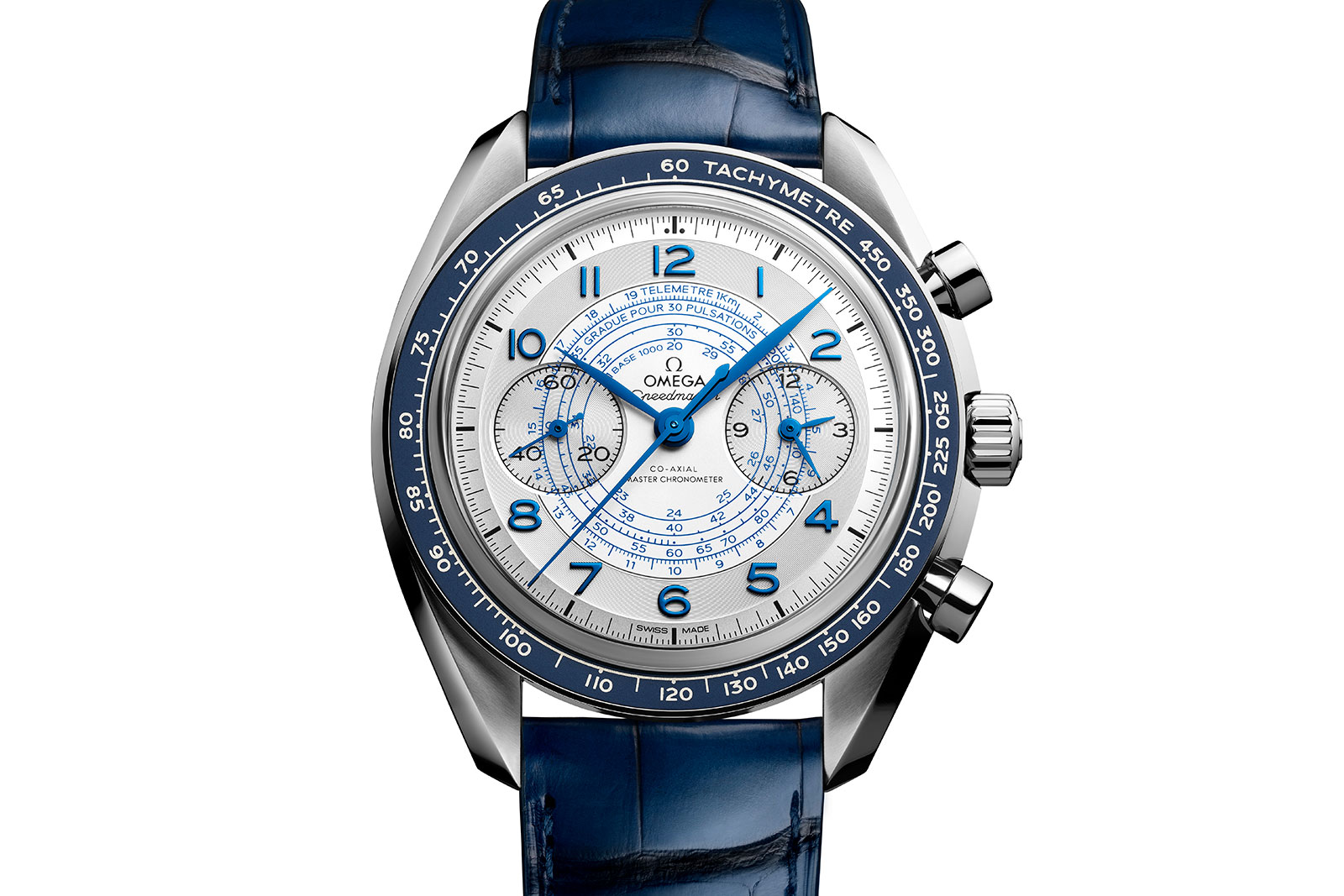 The latest from Omega is a surprise: a Speedmaster powered by a new, manual-wind calibre but fitted with a retro-inspired, multi-scale dial. Equipped with the full-spec cal. 9908, the Speedmaster Chronoscope is a 43 mm chronograph with a dial bearing three sets of measurement scales: tachymeter, telemeter, and pulsometer.

While the multi-scale dial is modelled on vintage Omega chronographs of the 1940s, the case is classic Speedmaster with its characteristic “twisted” or “lyre” lugs. 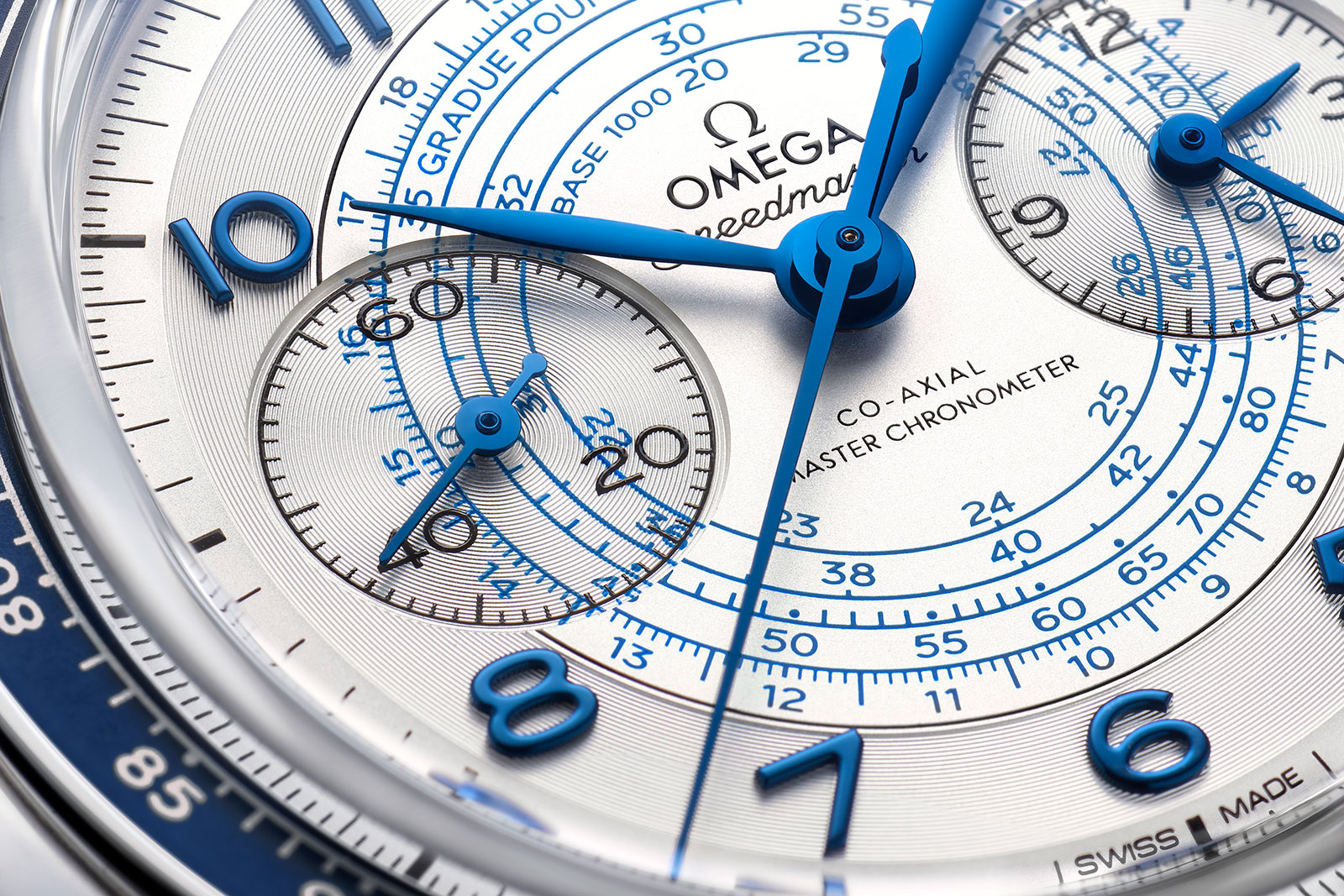 The Chronoscope is essentially combines well-known chronographs from two disparate periods in Omega’s history: the multi-scale dial typically associated with the vintage CK 2393 powered by the cal. 33.3 from the 1940s, plus the Speeedmaster case that is a 1960s design. But it is distinctly 21st century in mechanics with the new cal. 9908 inside.

While any one of those might be appeal on their own, together they don’t work well. The Speedmaster case design is about three decades older than the multi-scale so it feels incongruent. 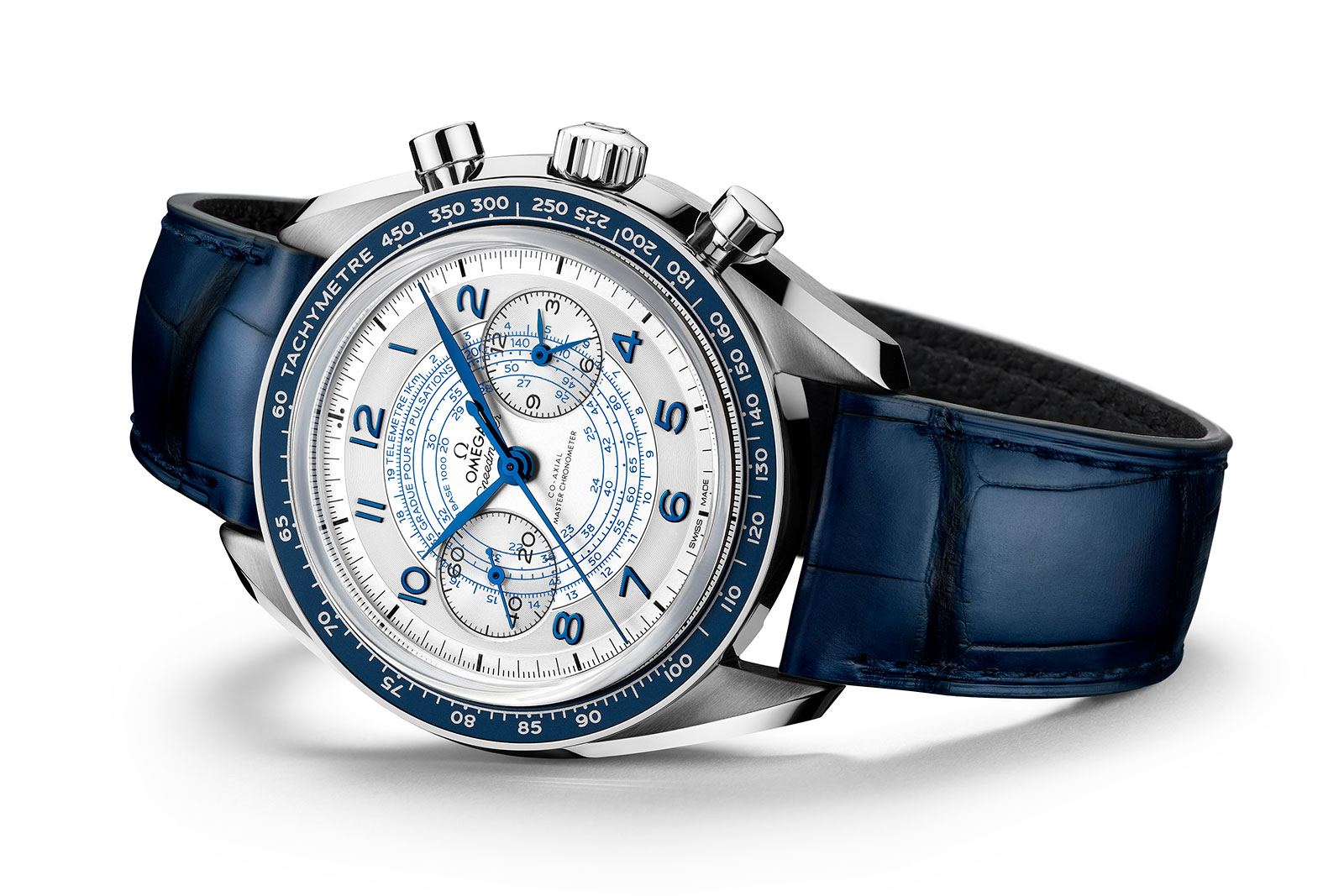 To be fair, the dial looks to be well executed with good detail and design. The portions of the dial look good and the applied numerals are a nice touch. And pricing is fair as well.

But despite the appeal of the individual elements, the whole is less than the sum of the parts.

Still, the design makes sense from a broader, commercial perspective since it adds a new look to the stable of designs for the Speedmaster, which is one of Omega’s bestsellers. For the average buyer who isn’t familiar with vintage design, the Chronoscope might have appeal as a new look for the famous watch that one to the Moon. 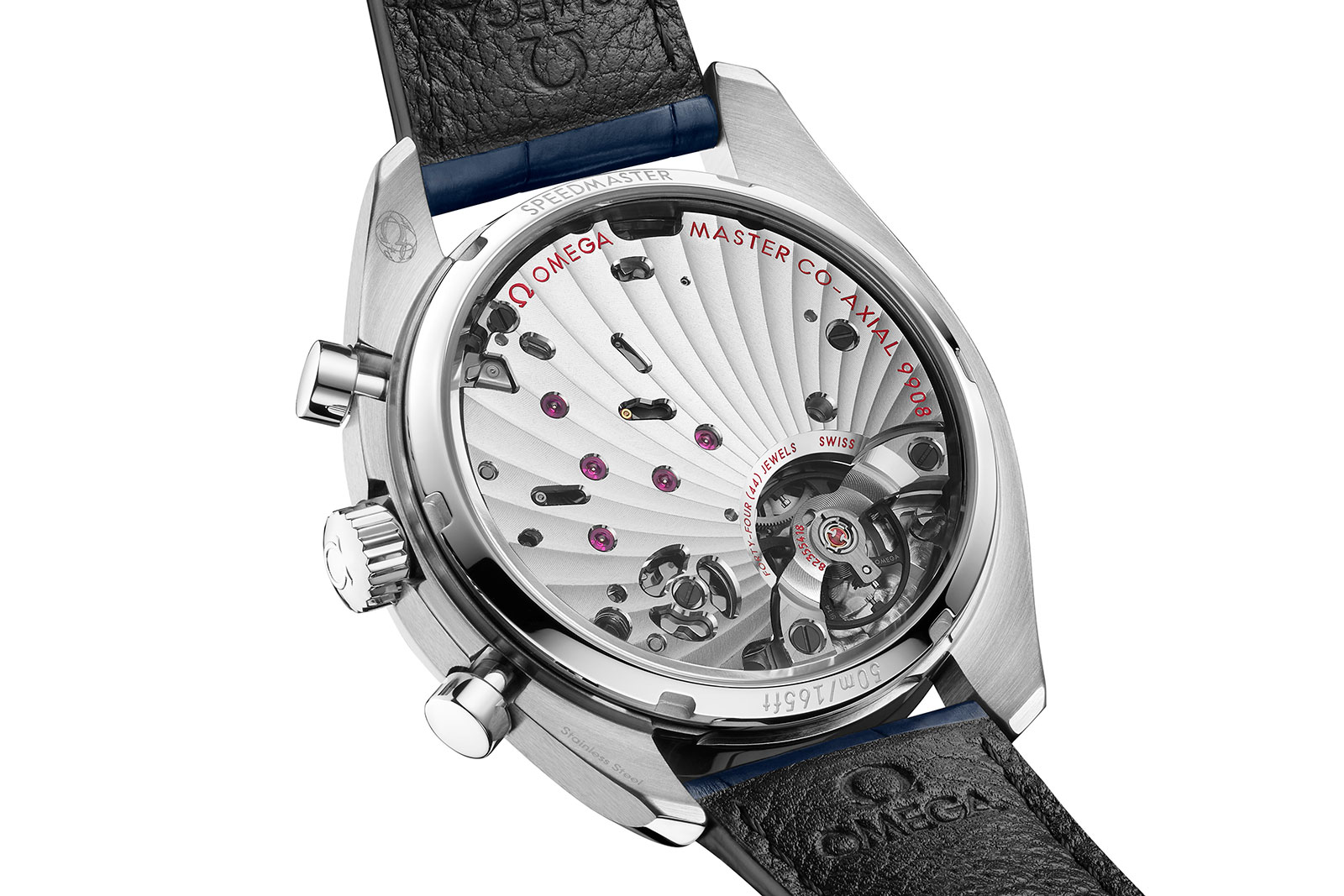 The Chronoscope dial takes after the multi-scale chronographs Omega produced in the 1930s and 1940s that were equipped with the cal. 33.3, most famously the CK 2393 with its narrow, straight lugs.

Though the multi-scale dial was common enough amongst chronographs of the era to be almost generic, Omega’s versions are some of the most desirable today, putting them amongst the most valuable. 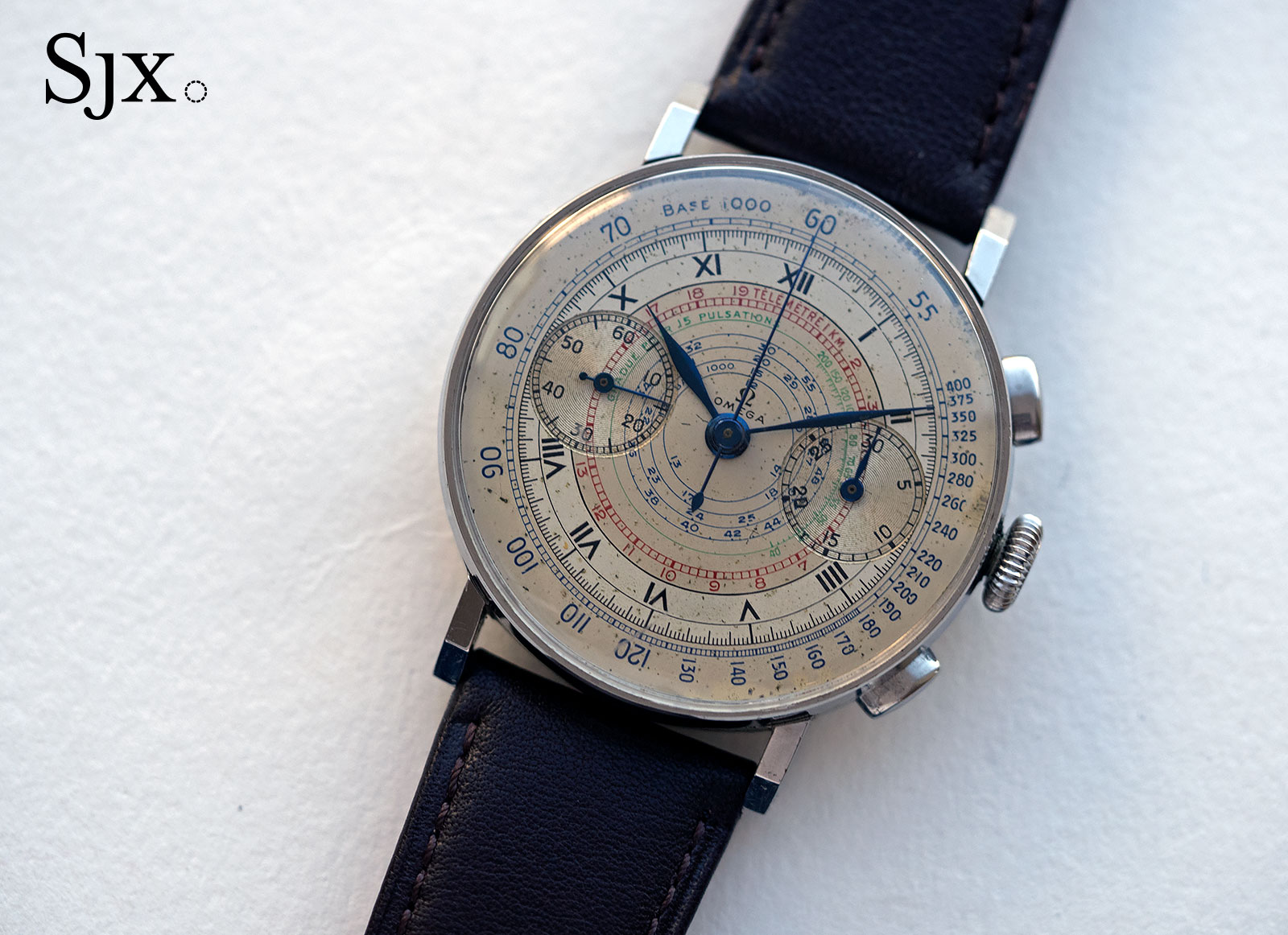 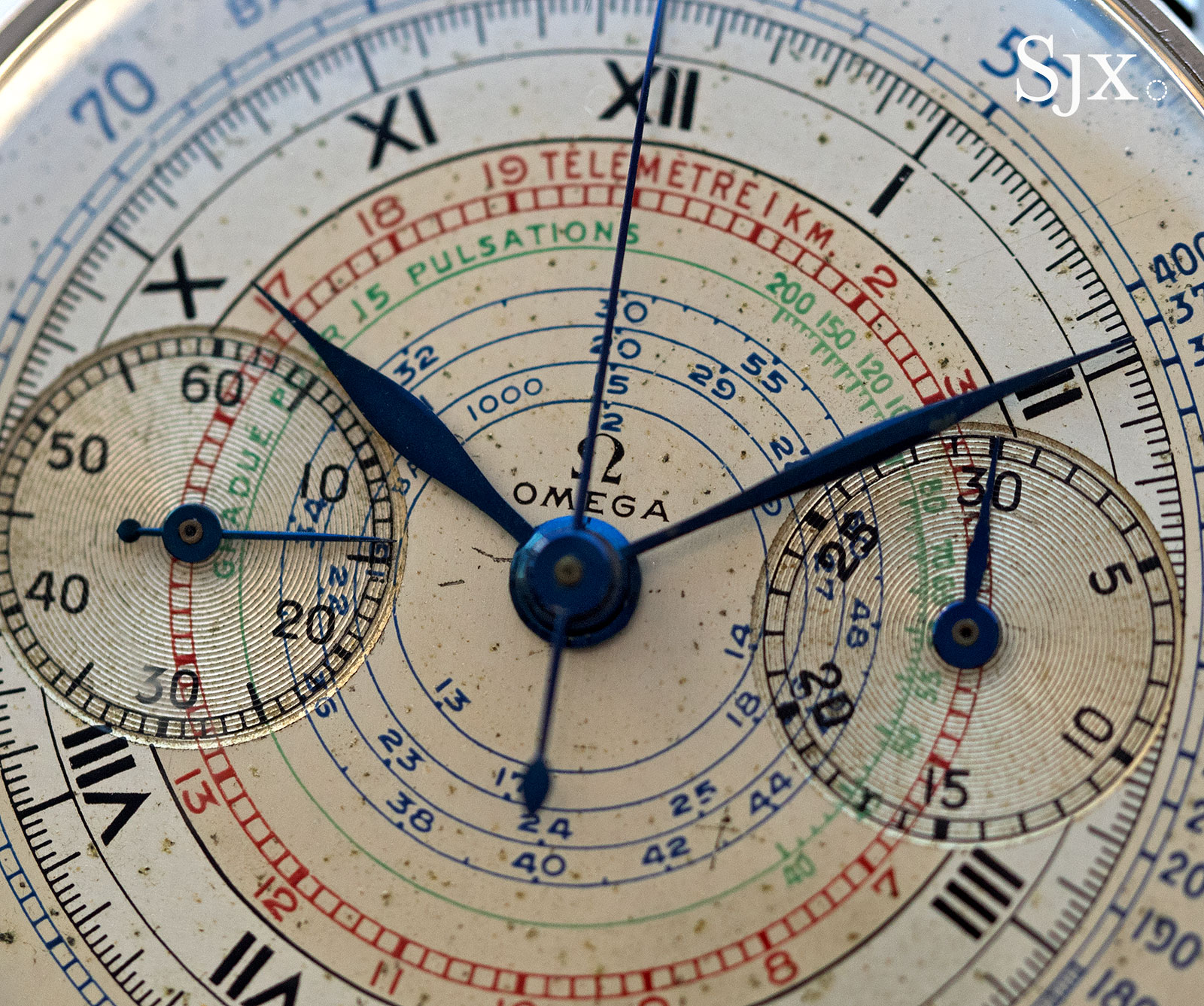 The Chronoscope does a good job of reproducing the multi-scale design, with each of the three scales legible arranged around the centre. But unlike in vintage watches where the scales are often in different colours, the trio of scales on the Chronoscope dial are all the same shade. Nonetheless they appear to be easily readable given the large font thanks to the size of the dial.

And the rest of the dial features appealing details like fine concentric stamping for the chapter ring with the hour numerals that echoes the two-tone finish on vintage dials. The sub-dials are also recessed, which also enhances the vintage-inspired look. 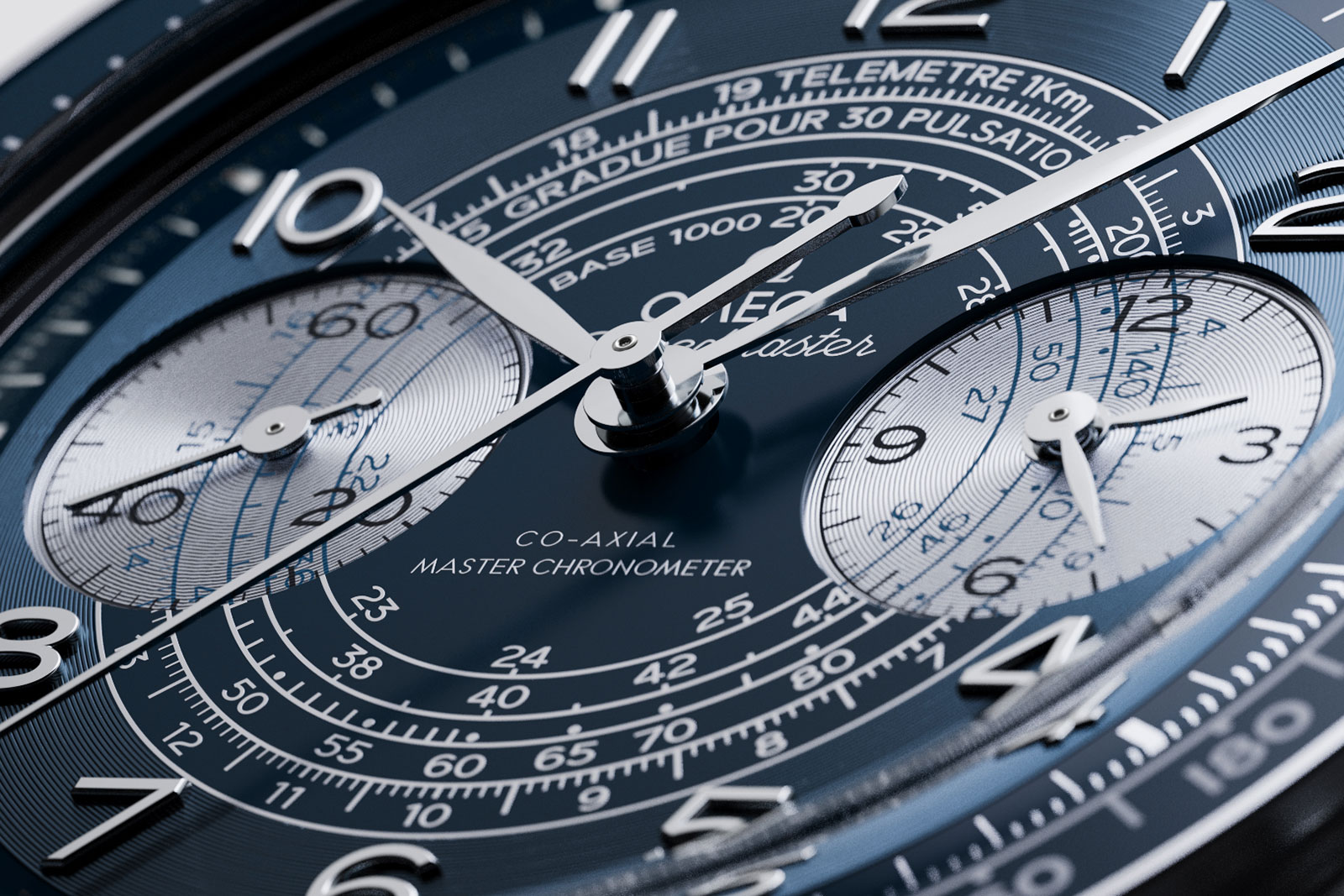 With its size dictated by the movement within, the Chronoscope is a large 43 mm in diameter, making it one of the biggest Speedmaster models in the catalogue.

The case is available in either steel or Bronze Gold. Fitted with an anodised-aluminium bezel insert that matches the dial colour, the steel model is available with three different dials and the choice of either a strap or a bracelet. 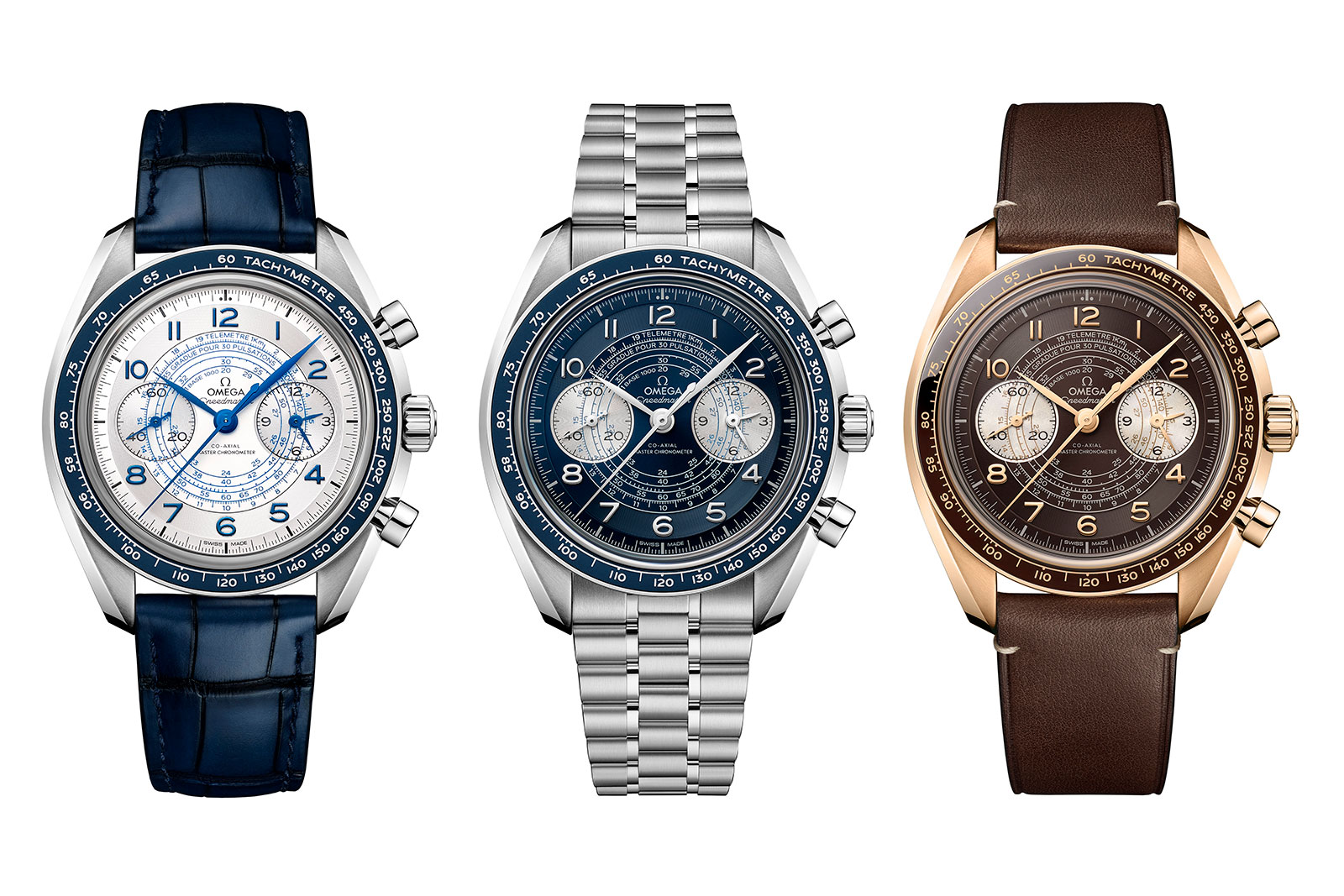 Omega’s proprietary gold alloy with relatively low gold content – it’s 37.5% gold instead of the 75% in 18k gold – Bronze Gold is being used for the second time since its launch with the Seamaster 300.

The Chronoscope in Bronze Gold is slightly fancier than its steel counterparts. Its dial is bronze with a chocolate, “patina” finish, and the bezel insert is brown ceramic. 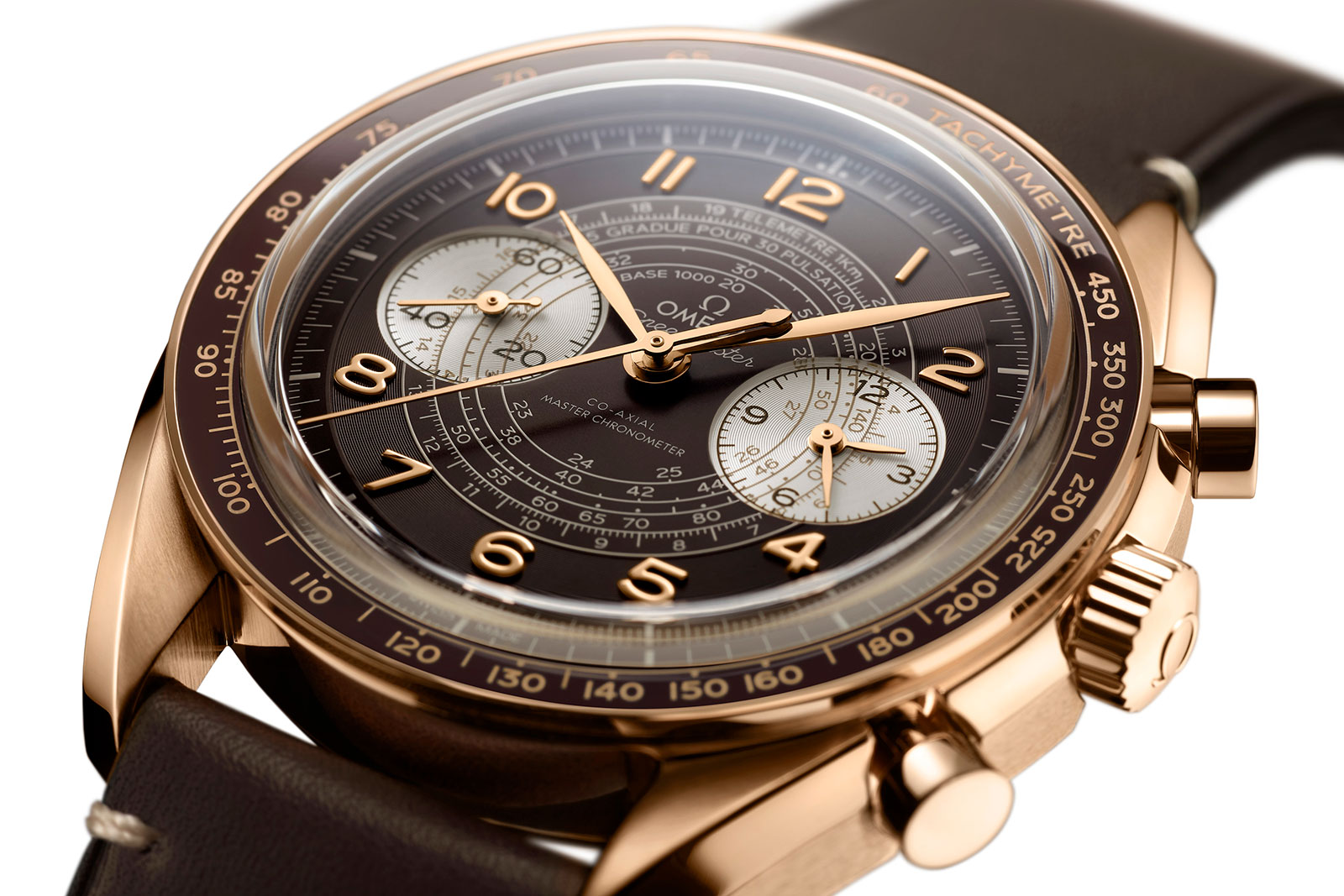 The new calibre is derived from the automatic cal. 9900, which is Omega’s flagship chronograph movement in terms of features – it’s basically the same thing but without the automatic winding mechanism. The removal of the self-winding mechanism helps explain the unusual appearance of the cal. 9908, which is dominated by a massive three-quarter plate with an aperture revealing the column wheel.

Like all latest-generation Omega movements, the cal. 9908 is equipped with almost everything Omega has invented (or acquired) in the last couple of years. It has a Co-Axial escapement, plus a silicon hairspring and non-magnetic escapement that together give it an industry-leading level of magnetism resistance.

Additionally, the twin barrels have their interiors coated in diamond-like carbon (DLC), a hard-wearing material that minimises the friction created by the mainsprings’ motion against the barrel walls. 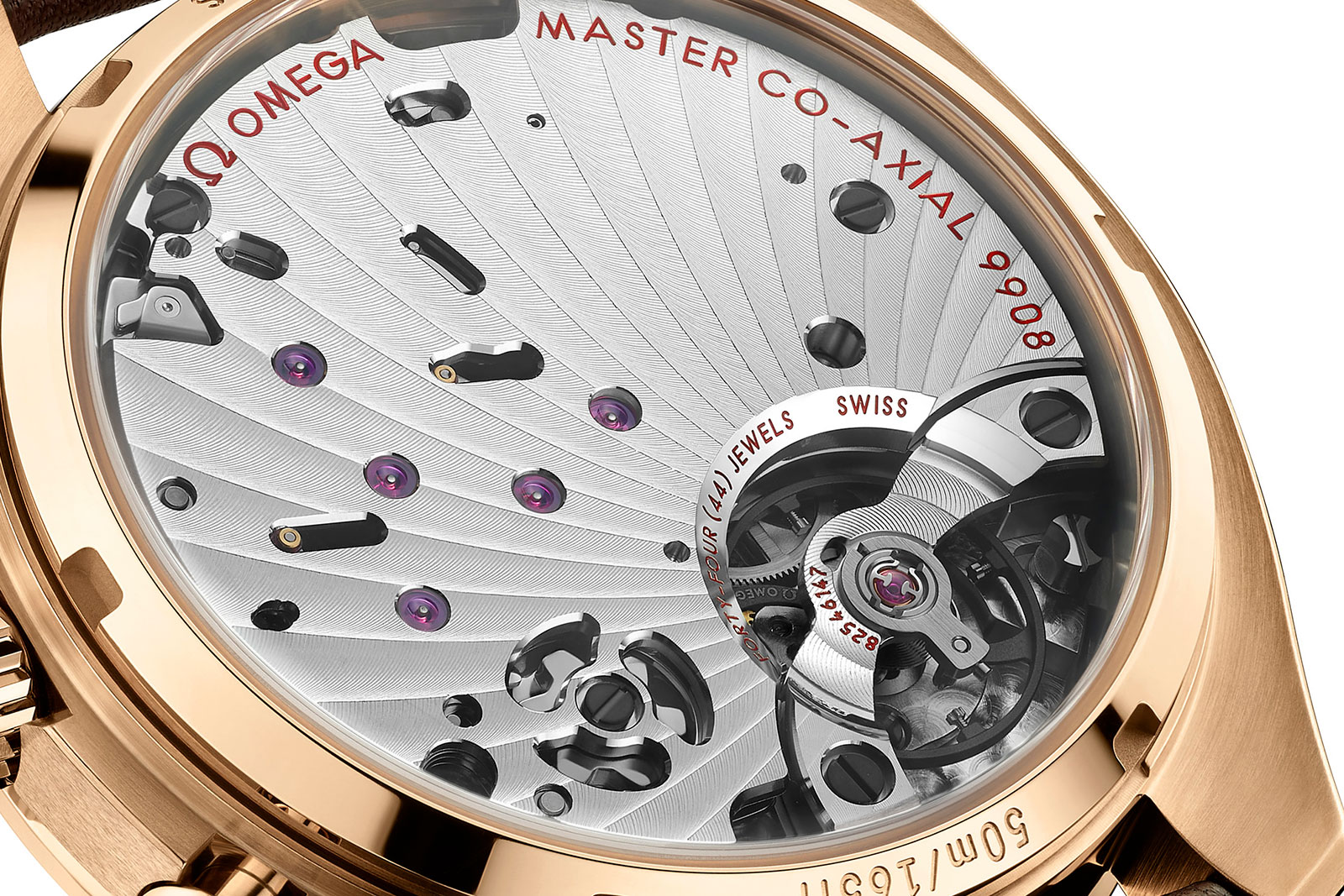