Unveiled two years ago, the BR05 was Bell & Ross’ take on the integrated-bracelet sports watch – probably the hottest genre of watches now. The brand then followed up with a skeleton version and also the twin-counter BR05 chronograph. And now Bell & Ross takes the covers off perhaps the most useful iteration to date – the BR05 GMT.

Though a newish arrival to a well-established genre, the BR05 was essentially derived from the brand’s trademark square watch case, a design dating to 2005 that was inspired by instrument panels of fighter jets. But the BR05 diverged from those military origins, acquiring a more refined, slightly retro appearance with its case finishing, a mix of polished and brushed surfaces, as well as an elegant integration of the bracelet. The new GMT sticks to the same design, while adding the utility of a second time zone. 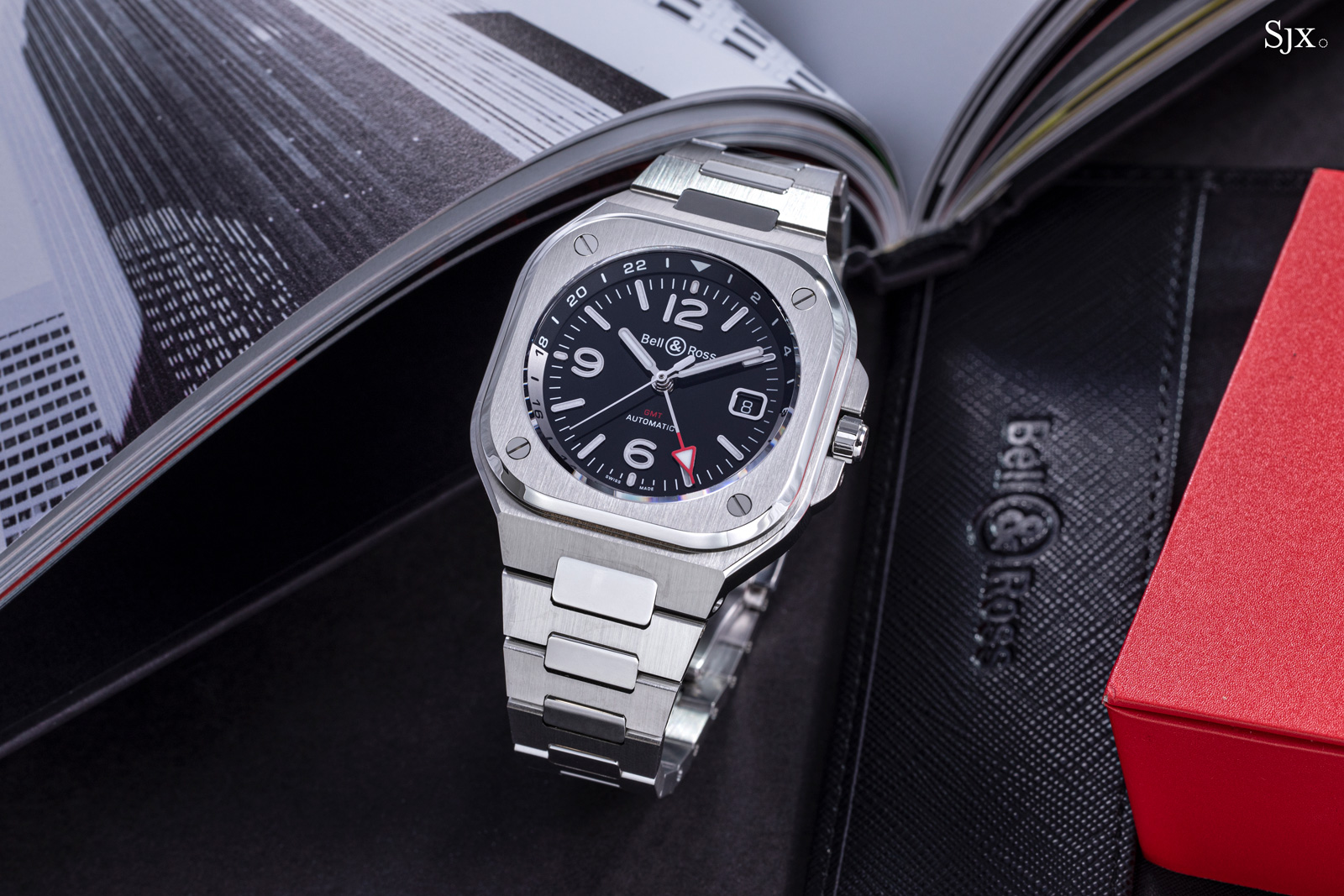 When Bell & Ross (B&R) offered to loan me a BR05 GMT prototype for a few days, I wasn’t expecting any surprises. But when I first got the watch in hand, I found the fit and finish unexpectedly good. The BR05 has an appealing, tactile feel, stemming from the sharply finished case and appealing design. My initial impressions were positive – the BR05 GMT lives up to the expectations set by its retail price.

The best feature of the GMT is something it shares with its siblings in the collection, namely the BR05 case and bracelet. They are well finished and a good look. But the GMT stands out for its simplicity – without being too plain.

The addition of a red GMT hand and lettering, along with the wide, sloping 24-hour flange, give the dial extra detail. This eliminates the wide, empty expanse of the dial in the time-only model that makes it seem sparse. But the GMT dial doesn’t try to do too much and remains purposefully no-frills, making it ideal for anyone who finds the base model too bland and chronograph too complicated. 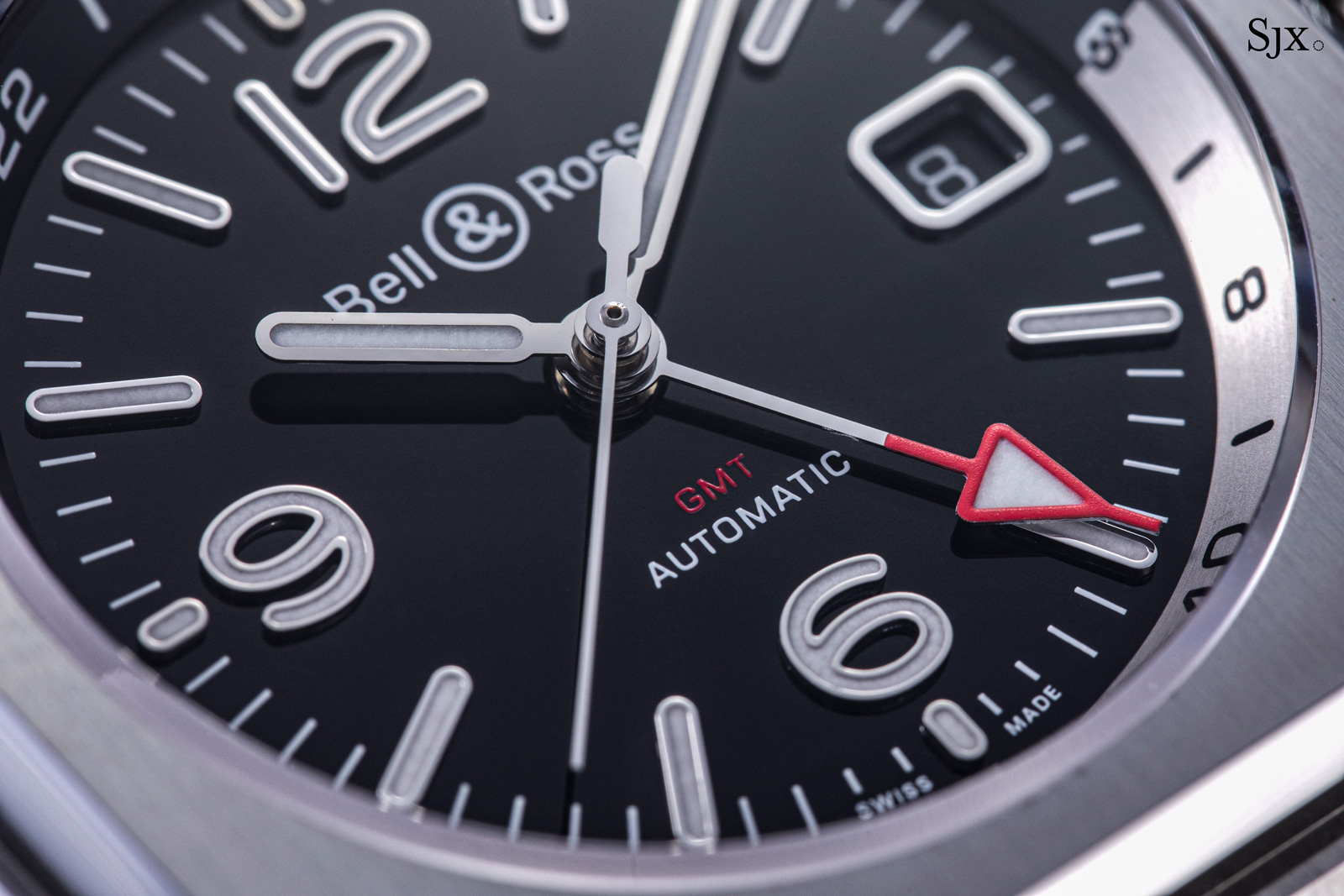 Though already pointed out earlier reviews of other BR05 models, it’s worth mentioning that the case is well made. Its construction and finishing ultimately gives the watch its appealing visual quality.

At 41 mm wide, the case is large and hefty and but not bulky, thanks to a relatively thin movement within. Still, the watch feels very much like a large, sporty watch, certainly more sporty than elegant. 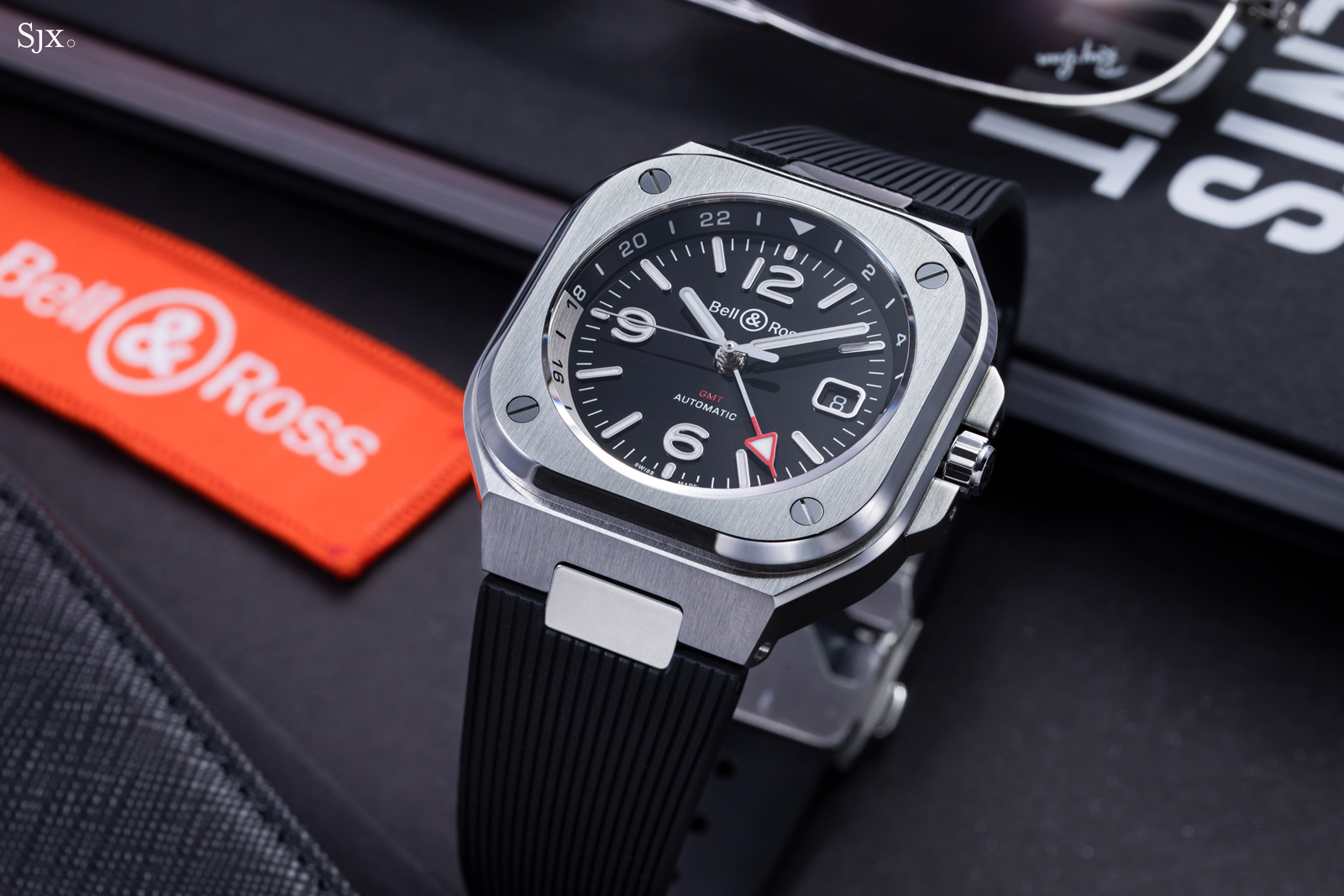 Like the other BR05 models, the GMT has a price that’ll spark discussion. The GMT on bracelet costs US$5,400, and the same on a rubber strap costs US$500 less.

At its price range, most of the BR05 GMT’s competitors rely on in-house movements, while the GMT is powered by an ETA, albeit one attractively modified. My initial impression was that the watch lived up to its cost, but as I wore the watch over the course of a week, I began to debate that conclusion, purely because of the movement inside. Prevailing wisdom is, after all, that an in-house movement is better.

I came to a conclusion: the fit and finish of the BR05 GMT is clearly superior to that of more affordable alternatives, both in terms of case and movement finishing, qualities that are quite apparent in the metal.

Compared against similarly-priced watches with in-house movements, the BR05 GMT unsurprisingly falls short in terms of technical features, most obviously power reserve, and the all-important intangible of the prestige associated with an in-house movement. But those shortcomings are made up for by its case and design – there aren’t many integrated-bracelet competitors at this price. 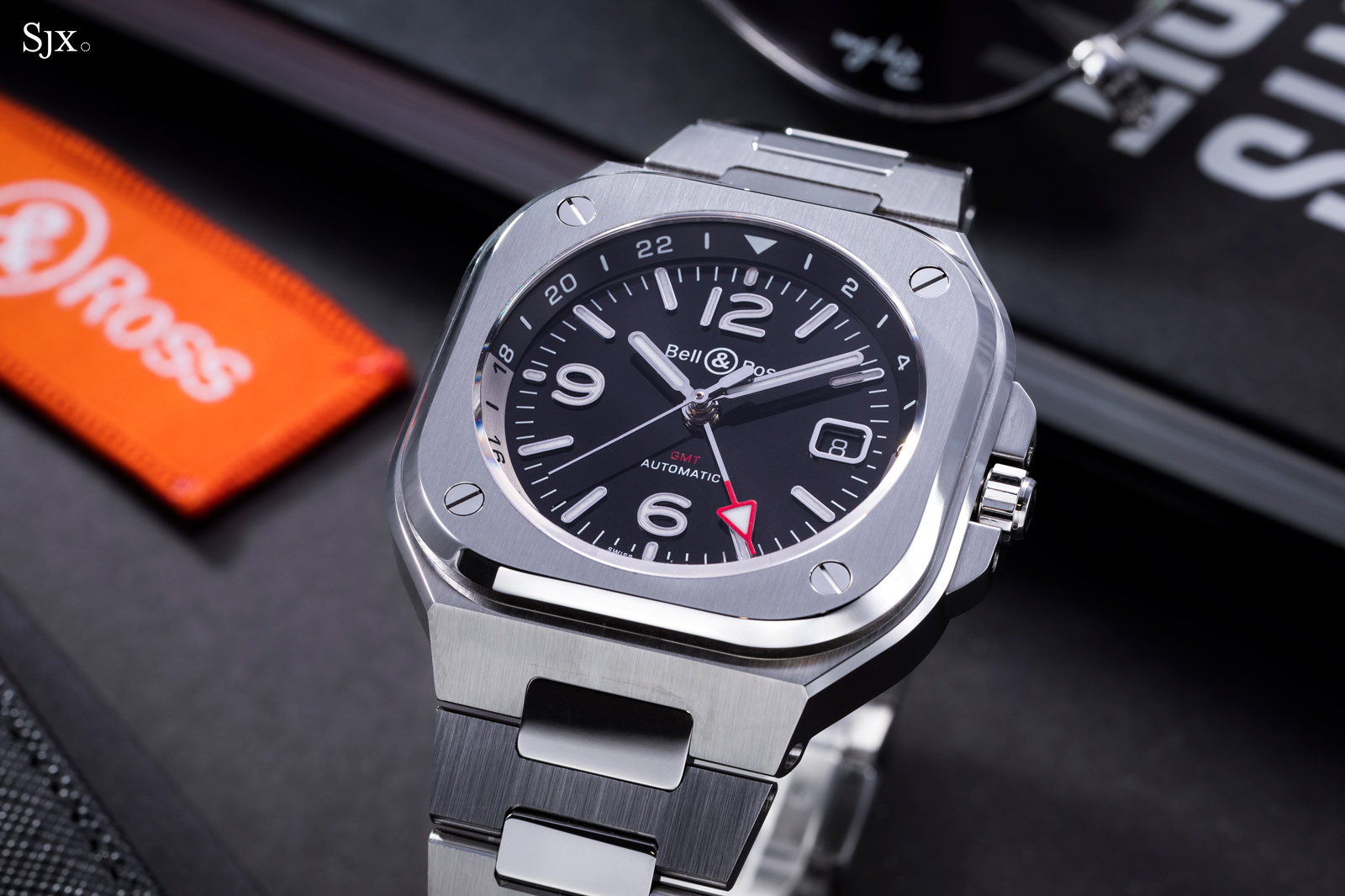 And it’s worth mentioning the BR05 GMT is available on a bracelet or strap, like the rest of the BR05 line. The natural choice is the bracelet. It doesn’t cost very much more, but adds substantially to the appeal of the watch, in both look and feel. That’s especially since the watch head is fairly heavy, which is balanced by a steel bracelet. 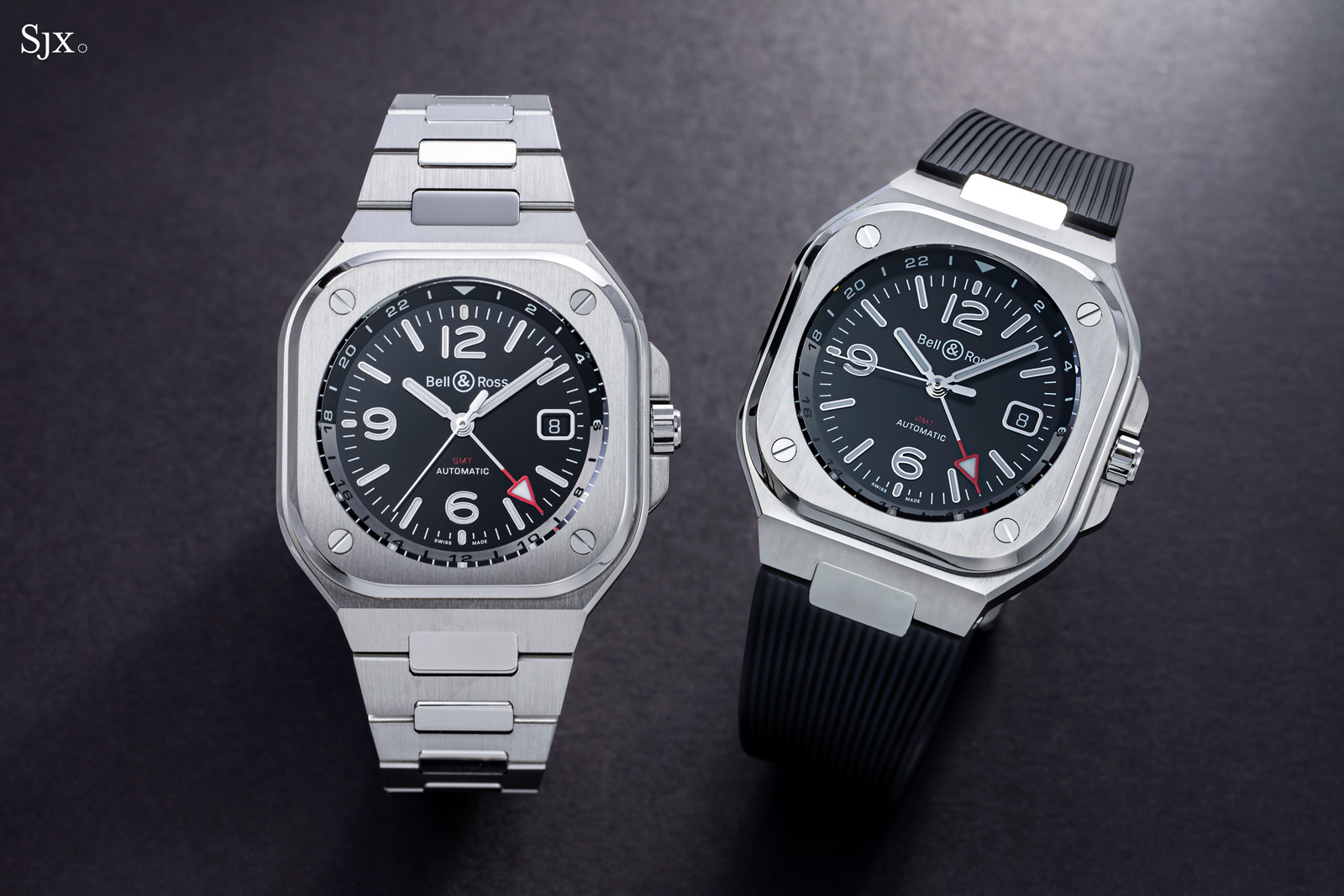 The addition of a second time-zone indicator might seem minor, but it brings much to the table, both in terms of function and appearance.

With the red-tipped GMT hand, the watch displays a second time zone on the outermost 24-hour scale. But perhaps more important, especially in an era of diminished travel, the red hand and matching text look good. They add contrast and life to the dial, just enough to be sporty but not distracting. And of course they evoke vintage sports watches with red text on the dial. And the dial finishing doesn’t disappoint. Both the dial print and painting on the GMT hand are nicely done, showing neat edges even up close.

Read in conjunction with the GMT hand is the 24-hour ring – a particularly interesting detail in terms of aesthetics. 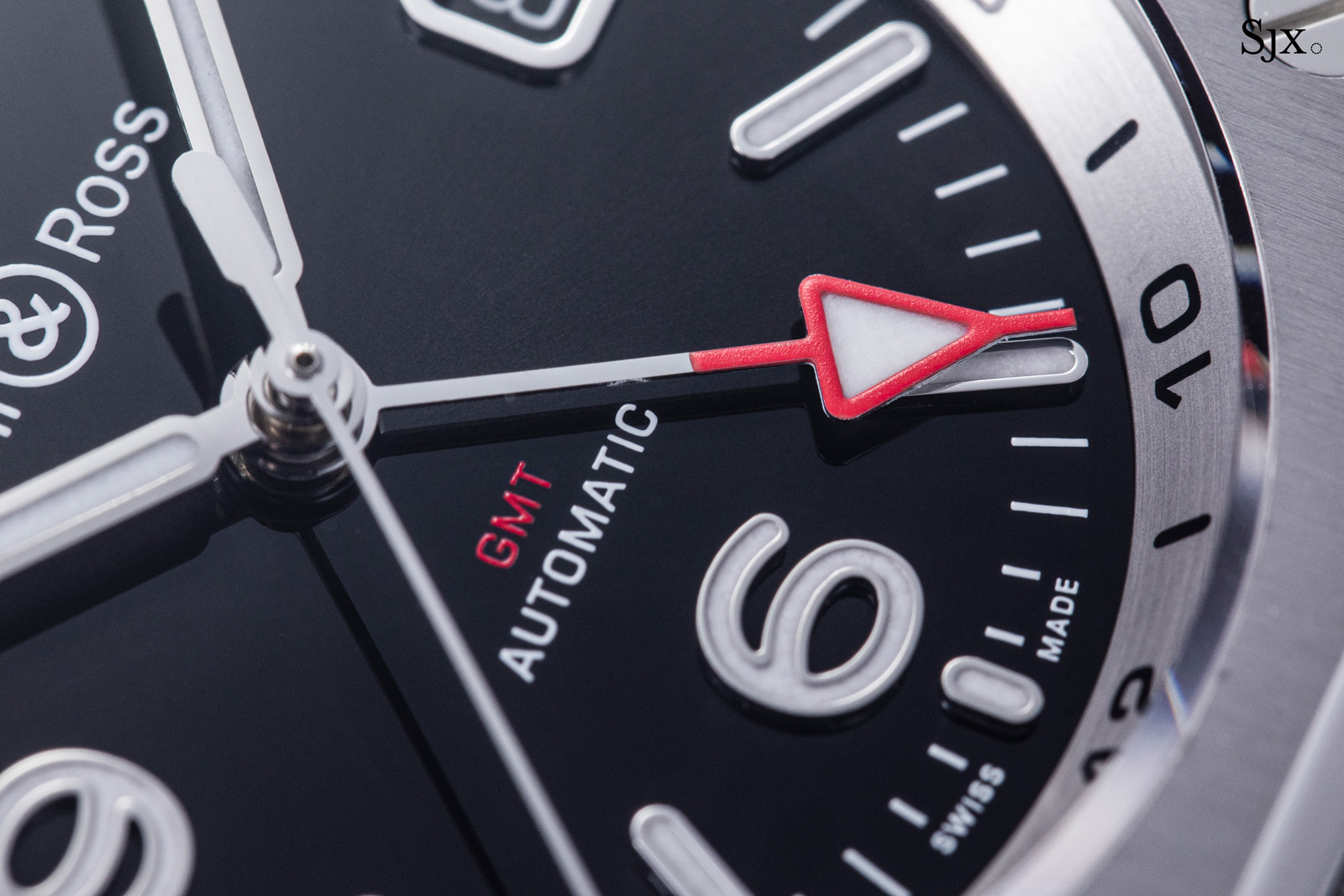 Set on a sloping flange around the dial, the 24-hour ring compresses the dial, leaving the watch with better proportions than the time-only model, while adding some visual depth.

And the 24-hour ring echoes the case and dial in its finish. The dark section is finished in a matte black, and the bright section is linearly brushed like the case. 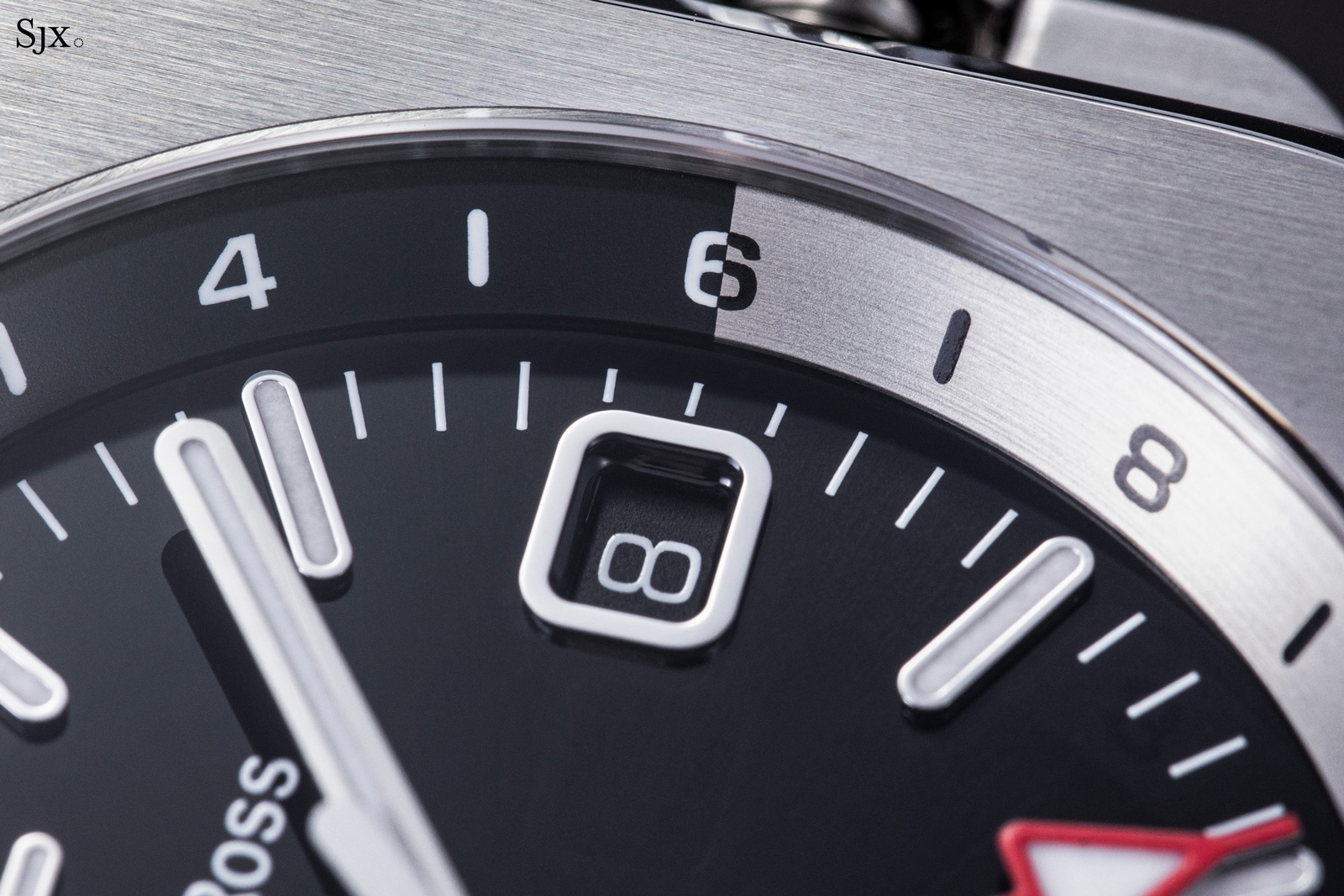 Also worth mentioning are the hour markers, especially the oversized Arabic numerals at the quarters, which call to mind the brand’s aviators’ watches. As a result, the dial is recognisable as a B&R. 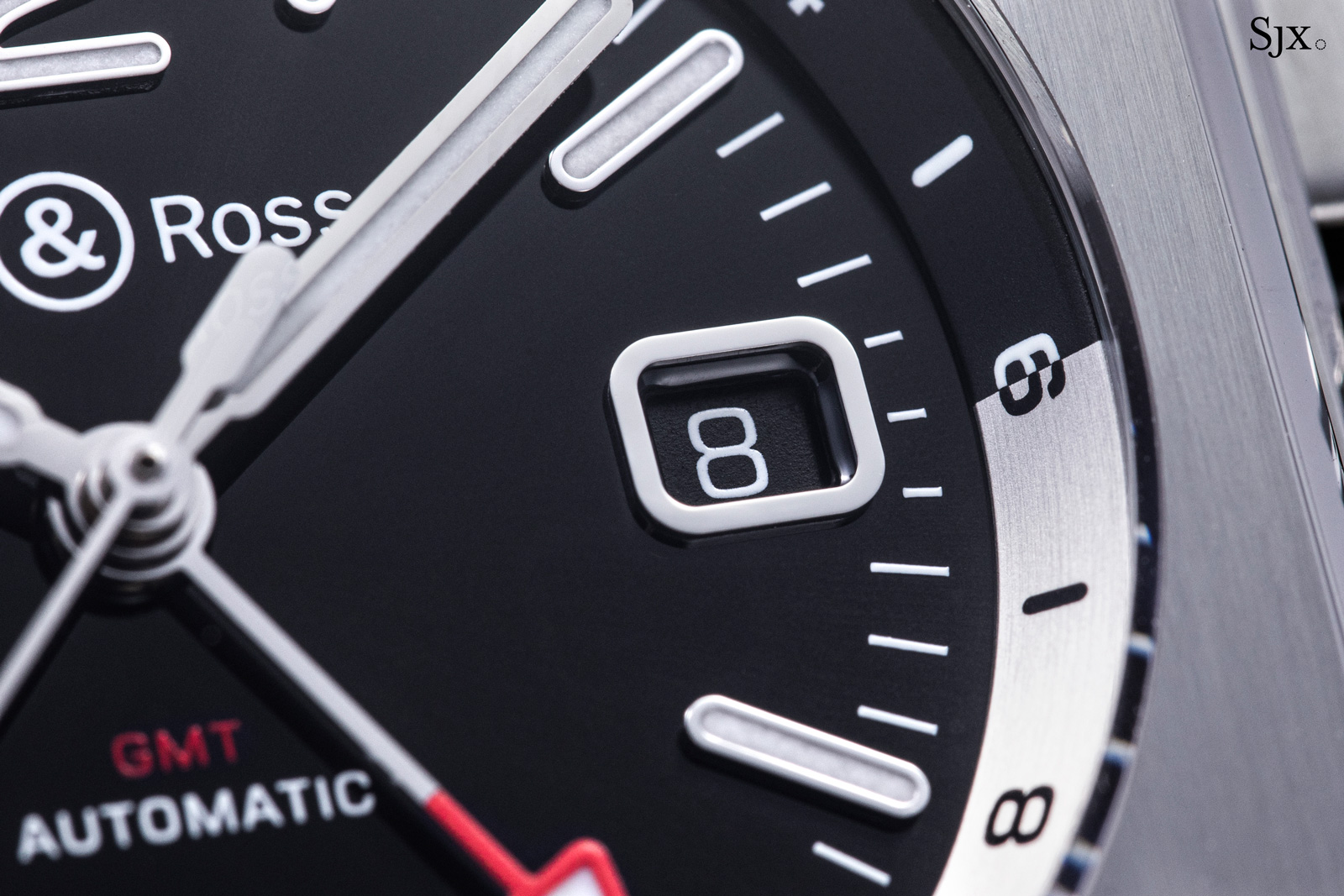 Thanks to the 24-hour ring, the date window sits close to the edge of the dial despite the smallish movement and large case

The case and bracelet are the best elements of BR05 GMT, as they distinguish the watch from the competition. They possesses the key hallmarks of a luxury-sports watch – namely a detailed, sophisticated finish and, of course, a bracelet that’s integrated into the case.

Comprised of three parts – bezel, case middle, and case back – the case is held together by four screws at each corner, a detail taken from the original BR01 case.

While the case is squarish, the dial is round, and the transition between the two contrasting shapes smoothened with rounded edges on the bezel, as well as the round screws. That said, while the bezel has softer edges, the case is angular with sharp facets, especially around the lugs, giving the watch a good mix of geometric shapes and surfaces. A consistent element of the BR05 design are exposed screws – a familiar element in luxury-sports watches.

The crown guards, for instance, are two separate pieces that are screwed into the case. The screws are simply finished with a polished head. That said, the screw slots on the bezel have a narrow, polished countersink. The BR05 case does best in terms of finishing. The brushed surfaces and polished bevels are finely executed, with refined, linear graining and precise edges, resulting in surfaces that catch the light well. And the bracelet is attractive for the same reason: the reflections on the alternating brushed and polished surfaces give it feel that punches above its price point.

Less obvious is the fact that the finish is a result of high-quality production – the surfaces lack the distortion that is typically found on a simple, stamped case. And that is no surprise given that B&R is owned by Chanel, which also owns one of the biggest case and bracelet manufacturers in Switzerland. A thin, polished bevel separates the different planes of the crown guard

A true GMT watch with a movement built from the ground up will have a 12-hour, local-time hand that can be adjusted independently in one-hour steps, leaving home time unaffected. But the ETA 2893 functions differently since the GMT function is an add-on.

In the ETA 2893, the 24-hour, home-time hand is adjusted independently, both backward and forwards in one-hour steps. But that the local-time hour hand cannot be set independently – since the hour and minute hands are adjusted in sync on the base movement – so adjusting the local-time hand will also move the the 24-hour hand. As a result, after setting the time for a new time zone, an extra step is needed to return the 24-hour hand back to home time. That setup does bring with it one advantage. The ETA 2893 has a quick-set date, meaning that the date can be cycled forward or backward easily. The date on a true GMT watch, however, can only be adjusted via cycling the hour hand through an entire day, or 24 hours.

At the same time, the ETA 2893 also works well for someone who’s not travelling but needs to track a different time zone, since the 24-hour hand can be adjusted without affecting the local-time hand.

Even though the movement is obviously an ETA to the keen-eyed observer, it is not instantly recognisable as such.

That’s because the BR-CAL.325 is not a stock ETA 2893. It’s been upgraded, especially in terms of looks. Most obvious is the addition of a full rotor that has been smartly skeletonised. The open-working leaves more weight on one half, while retaining a relatively symmetrical design, bringing to mind the “mysterious” rotors found on some high-end movements. The finishing of the rotor is clean, with brushed top and bevelled edges, though the bevels are simply stamped The screws heads have a tumble-polished finish

The bridges and base plate have been blasted to create a grained surface – which certainly looks better than industrially-applied perlage – that contrasts with the brushed surface on the rotor.

Upon close inspection, the bevelling on the base plate and bridges are slightly shinier than that on the rotor, indicating that it was milled on a CNC machine with diamond-tipped drill bit. The BR05 GMT is a good-looking, useful watch that’s well made, and perhaps the best value in the BR05 line up. For one, it’s more appealing than the time-only model, both in terms of design and function, but only marginally pricier. The chronograph is indeed more interesting, but it comes at a much higher price. For those who appreciate simple design but wants a bit more flair, the GMT sits at the sweet spot of style, affordability, and utility.

Against the competition, the BR05 GMT does not disappoint. Every part of the watch feels as good as it should be, save for the outsourced movement. But that isn’t inherently bad – the ETA has been upgraded – though it does mean the movement lacks the specs of modern, in-house movements, most of which have longer power reserves.

While competition is strong in the US$5,000 price range, few brands offer the same elements in one package, namely an integrated-bracelet design that’s thoughtfully styled and well executed.