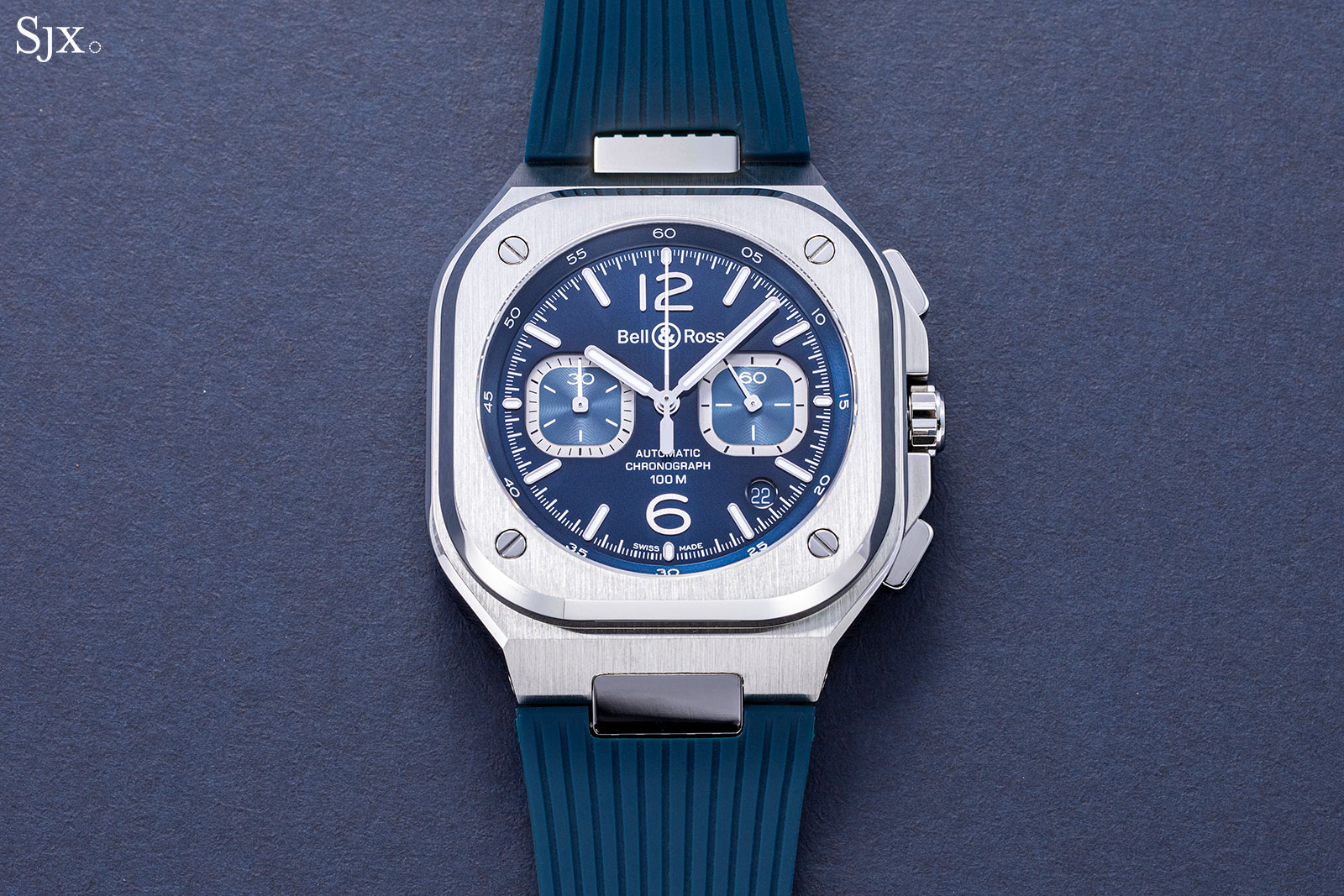 Bell & Ross’ integrated-bracelet sports watch gets an upgrade this year, with the bigger, and arguably better, BR 05 Chrono.

The new chronograph retains the design of the basic BR 05, but incorporates 1970s racing-chronograph style with its twin square registers. At the same time, the case design and finish work better on the larger format, but the case of the chronograph is surprisingly thin, resulting in an unusually slim profile on the wrist for what it is. 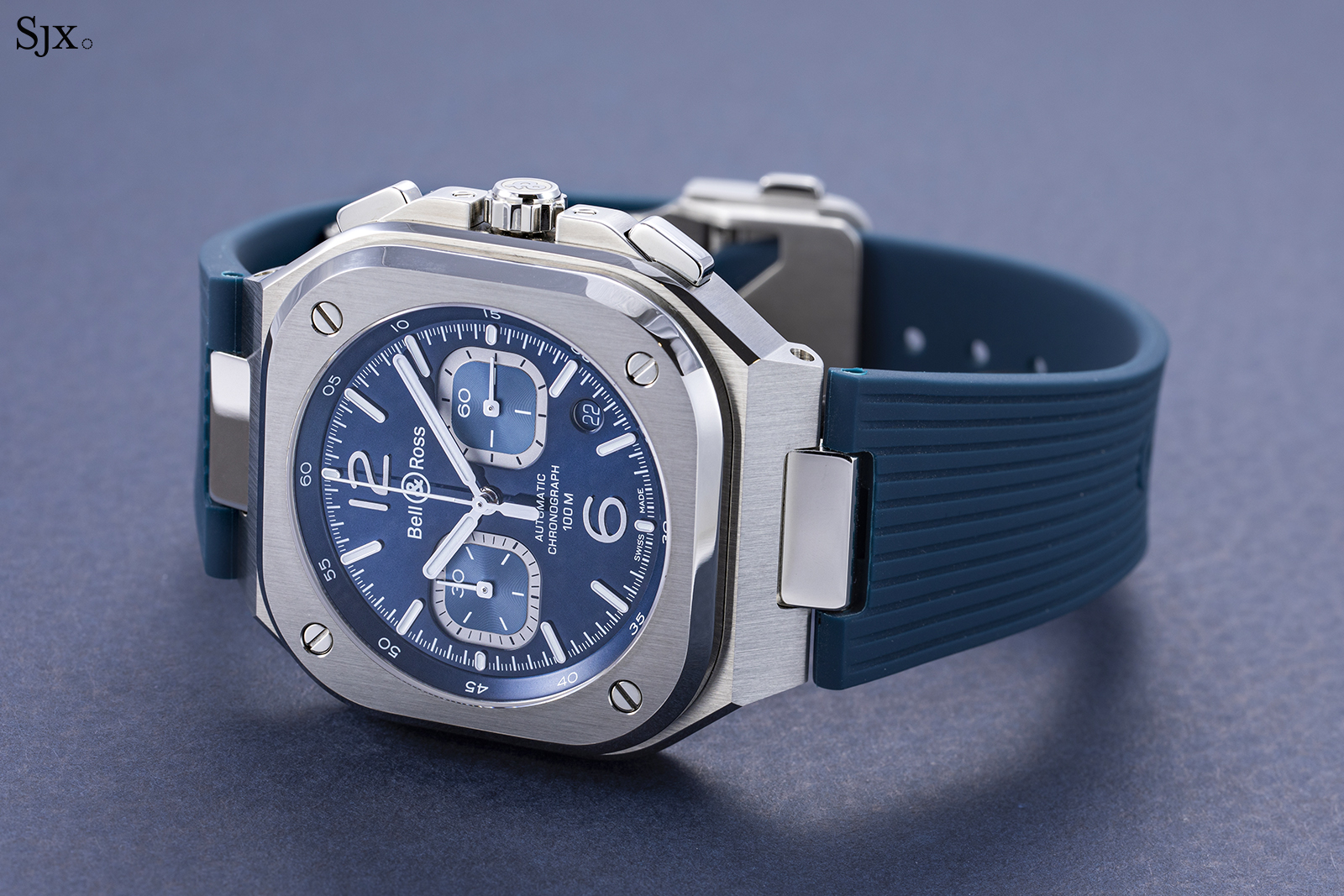 In the heavily-populated category of integrated-bracelet sports watches, the best value is typically found at the less obvious brands. In its class, the Chopard Alpine Eagle XL Chrono is just excellent, and so is the H. Moser & Cie. Streamliner, albeit in a higher price class.

In the affordable category, the BR 05 does well. The three-hands-and-date BR 05 is solidly executed and well priced, but looks and feels a little small, despite being 40 mm (and the skeleton version of the same is cooler but pricey). The best feature of the BR 05 is the case, which is neatly finished and nicely detailed, particularly in its price segment. 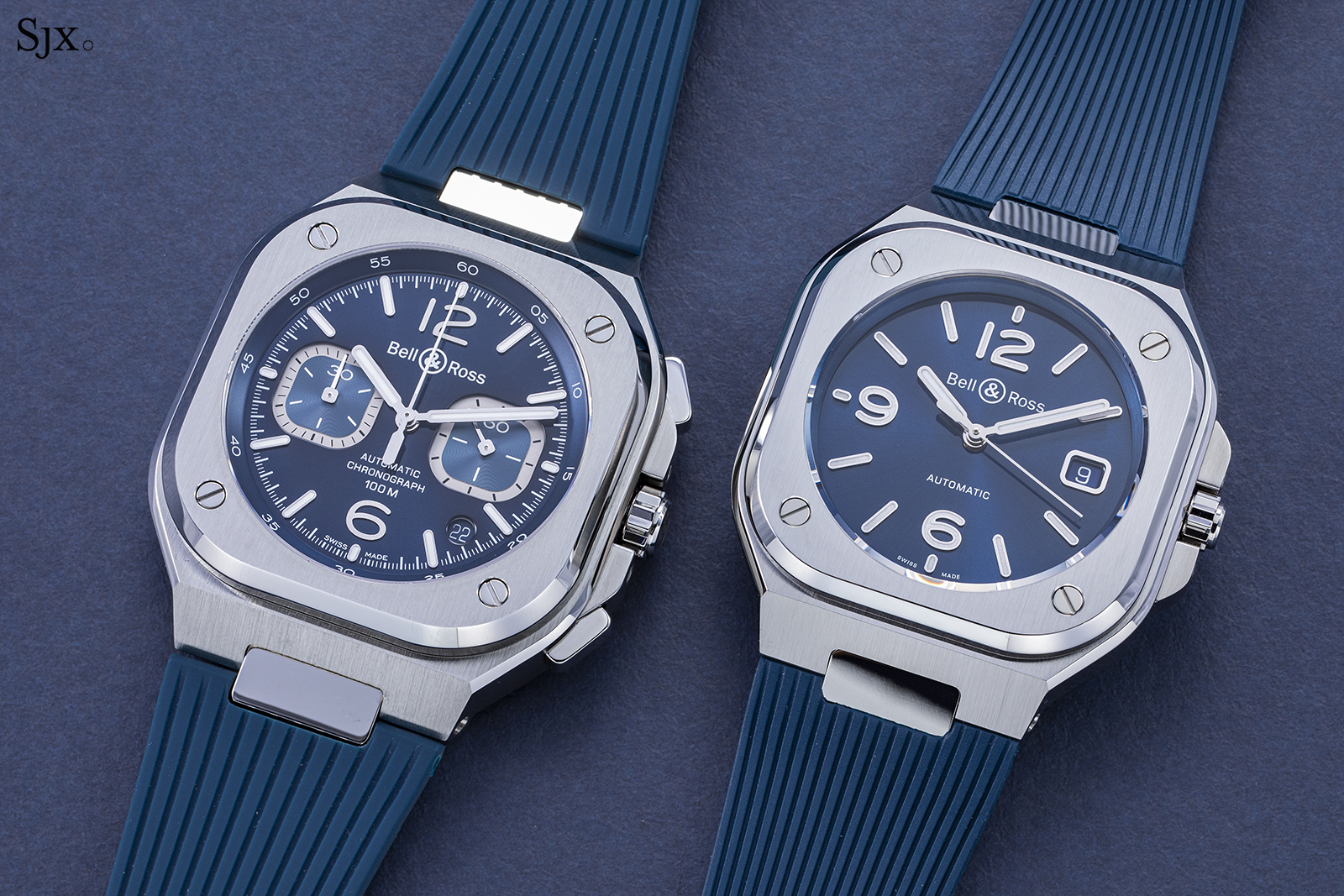 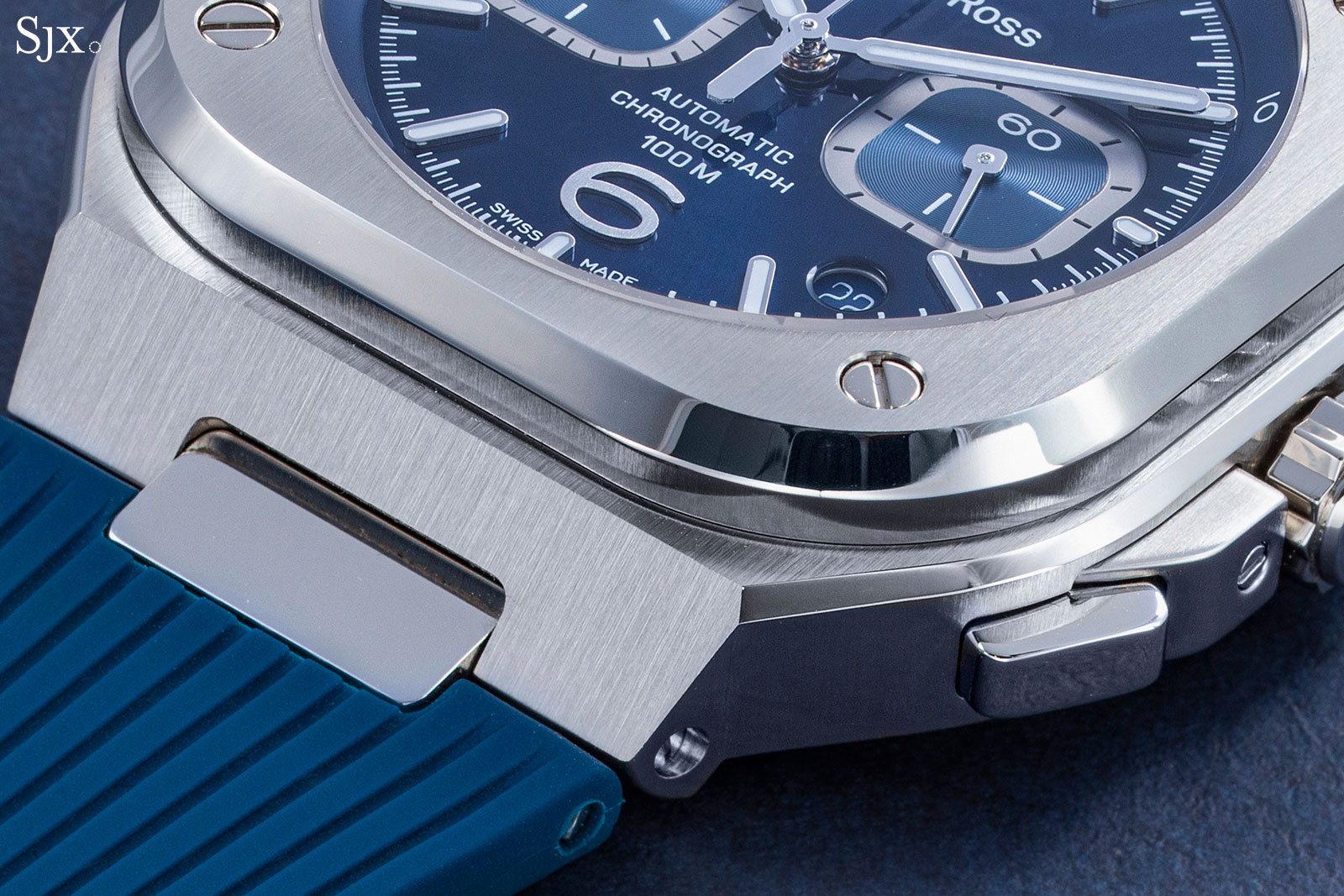 The new BR 05 Chrono fixes the size issue. It retains the same case and finishing, but grows it to 42 mm. The larger size is just right – the proportions that suit the look of the watch.

And design-wise the chronograph also works better – and looks more distinct than its time-only counterpart. The chronograph has a 1970s-racing-watch vibe, rather than the fashionable and more common integrated-bracelet, luxury-sports watch look. The secret to that are the square chronograph registers, a detail that instantly evokes the 1970s and brings to mind watches like the Heuer Monaco. 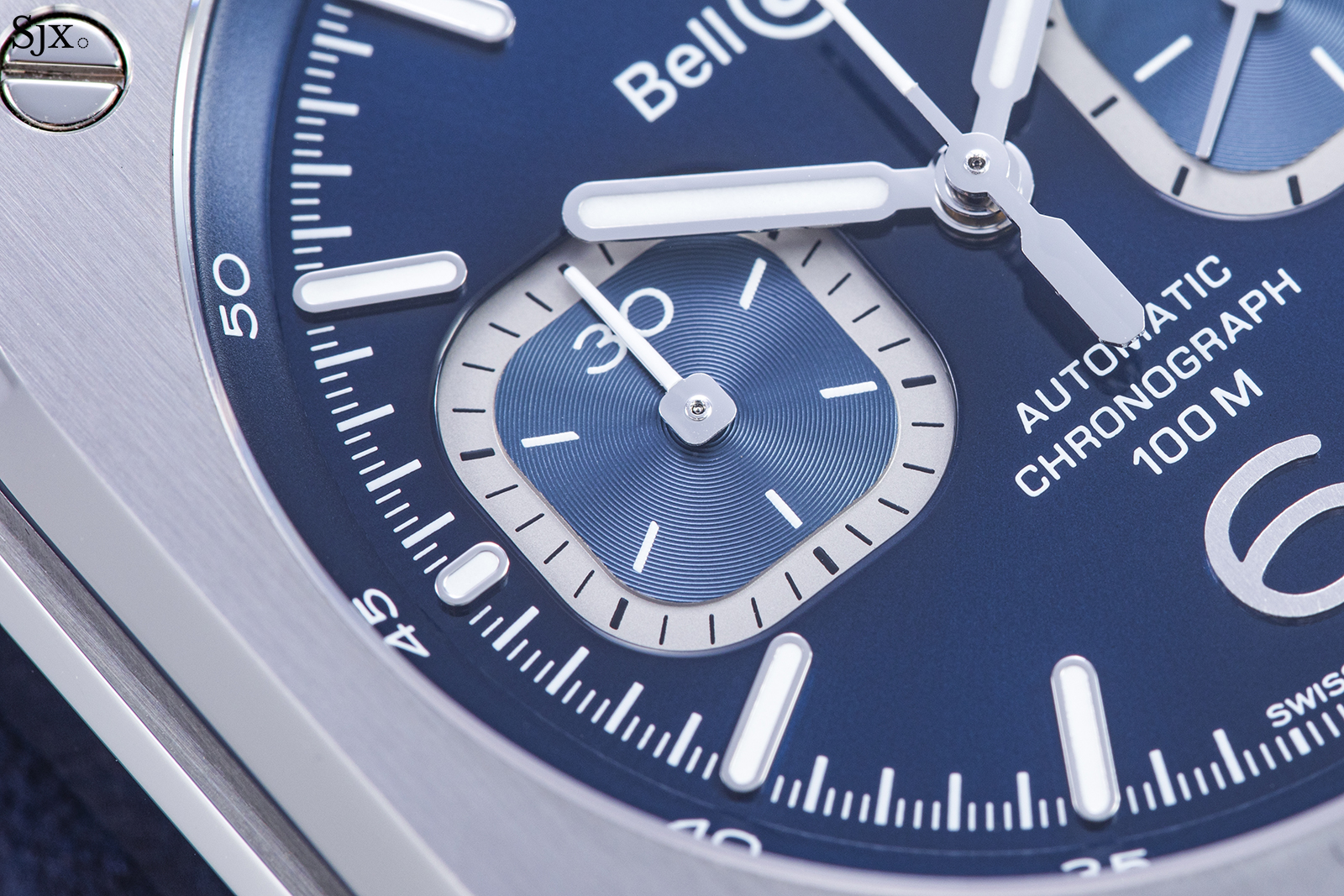 For that reason, the version on a strap is arguably more appealing, because it has a more distinct character, while the model with a bracelet does bring to mind popular integrated-bracelet watches.

Starting at a bit under US$6,000 for the version on a strap, the BR 05 Chrono is also competitively priced.

Bell & Ross was founded in 1992, but unveiled its defining watch in 2005, the BR 01. Modelled on an aircraft cockpit clock, the BR 01  was one of the “it” watches of the mid 2000s, and has since evolved into the smaller and more manageable BR 03. The BR 05 is essentially a twist on the BR 03, admittedly with a little inspiration from the better-established designs in the luxury-sports watches category.

The size and thickness of the chronograph gives the case more impact. Now the stepped construction from case middle to bezel has more depth, which shows off the contrasting surface finishes better.

Notably, the BR 05 Chrono is actually unexpectedly thin for what it is. The case stands 12.4 mm high, which is only slightly more than a Rolex Daytona. 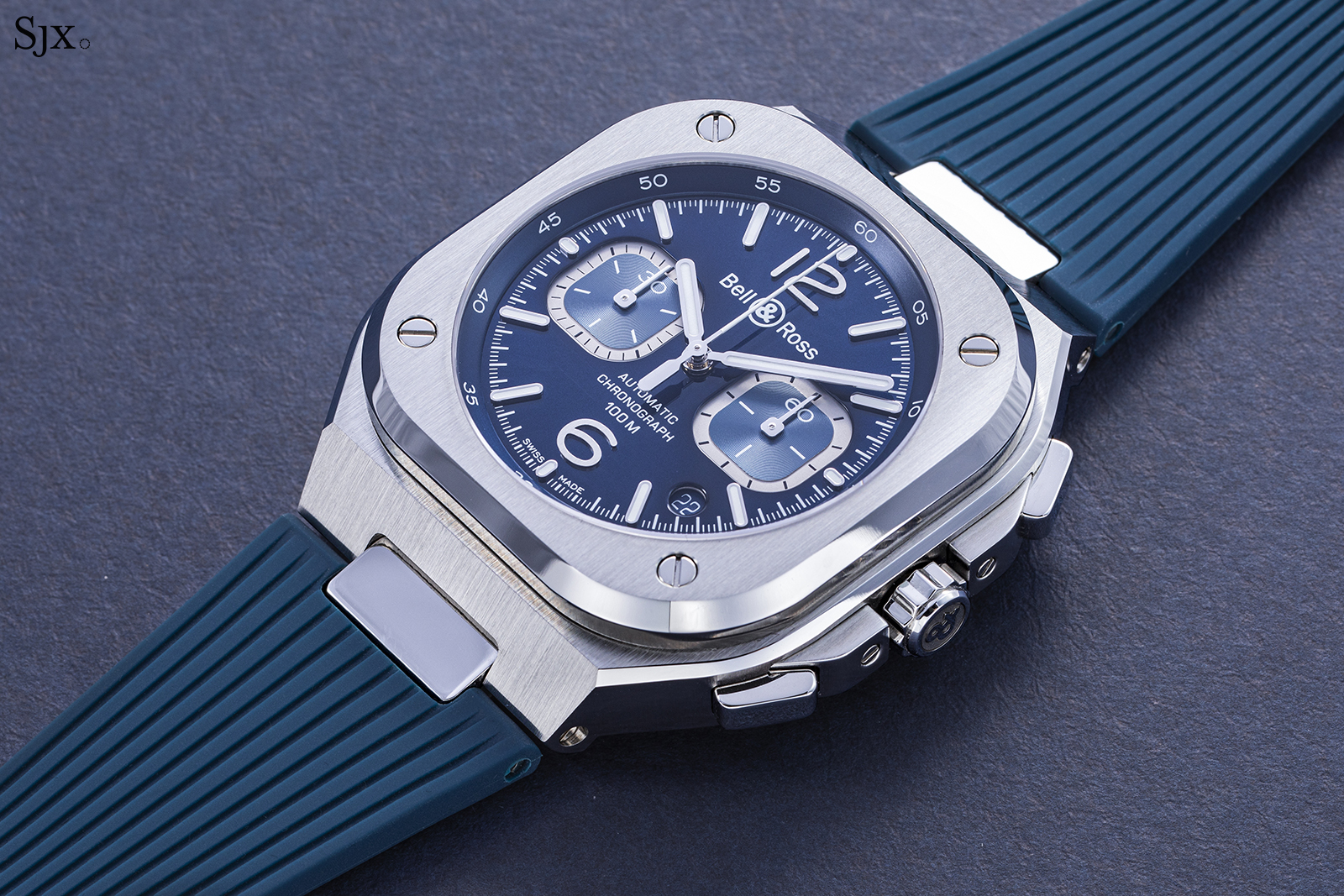 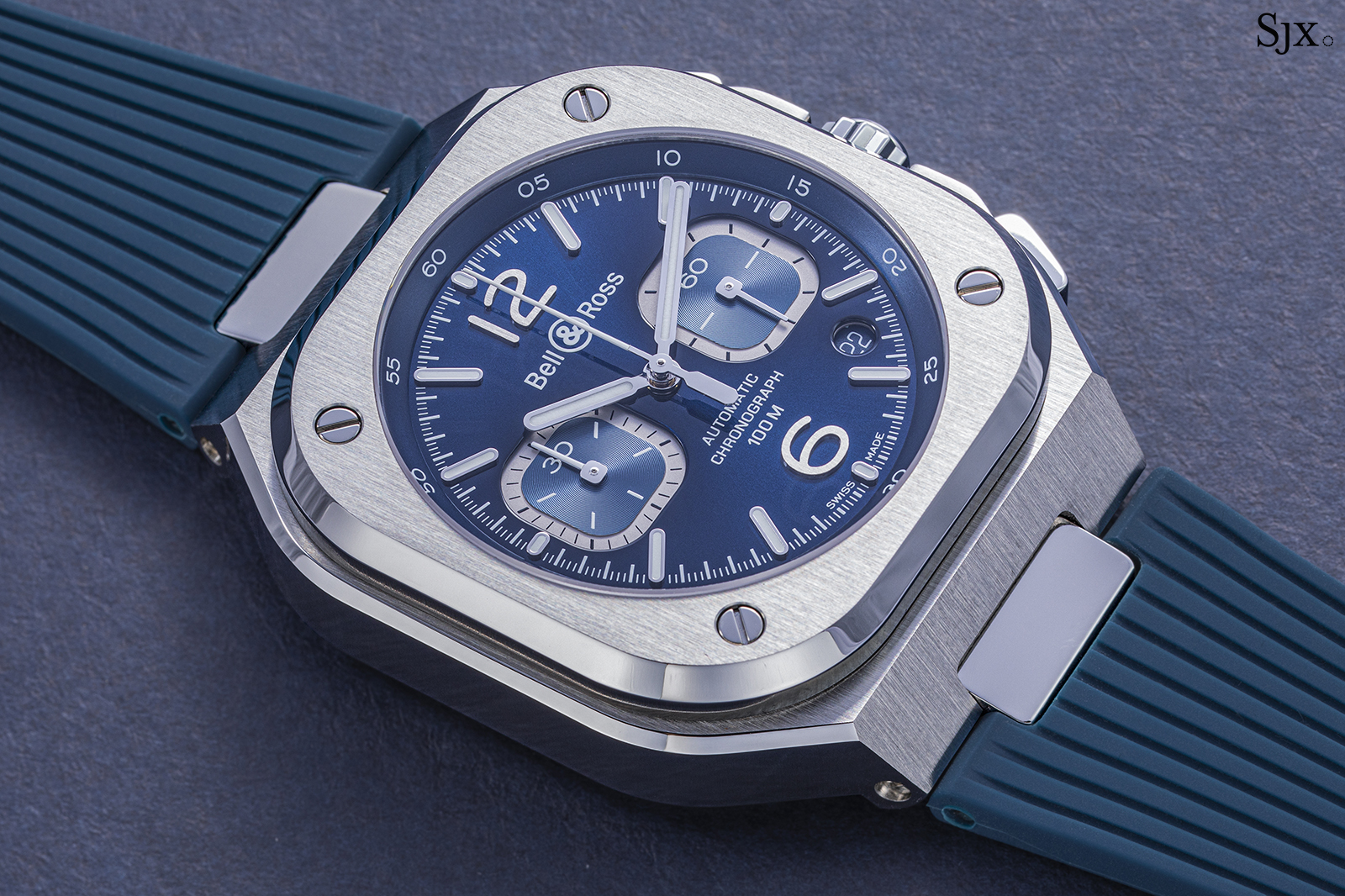 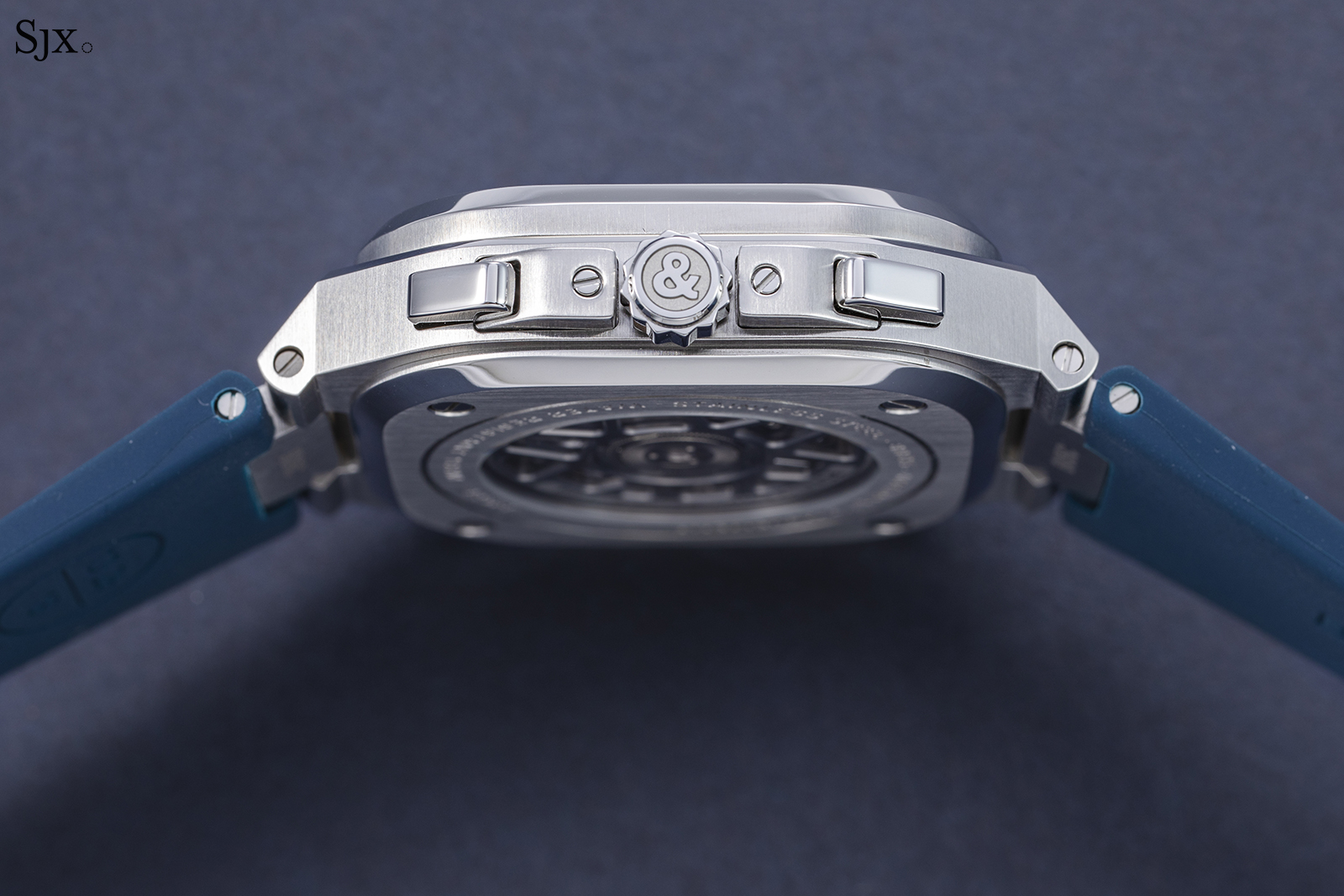 The case finishing is well done, particularly on the bezel and case middle. The bezel is wide and fairly high, which helps hide some of the height of the watch, with a brushed top and mirror-polished bevel all around.

Most illustrative of the finishing quality are the edges between the planes and surfaces – everything is sharp, clean, and well defined. The only aspect of the case that is not as well done are the pushers and crown guard. These are separate parts installed into the case middle, and they have softer lines and edges. This is not obvious on the wrist, and is forgivable given the price. 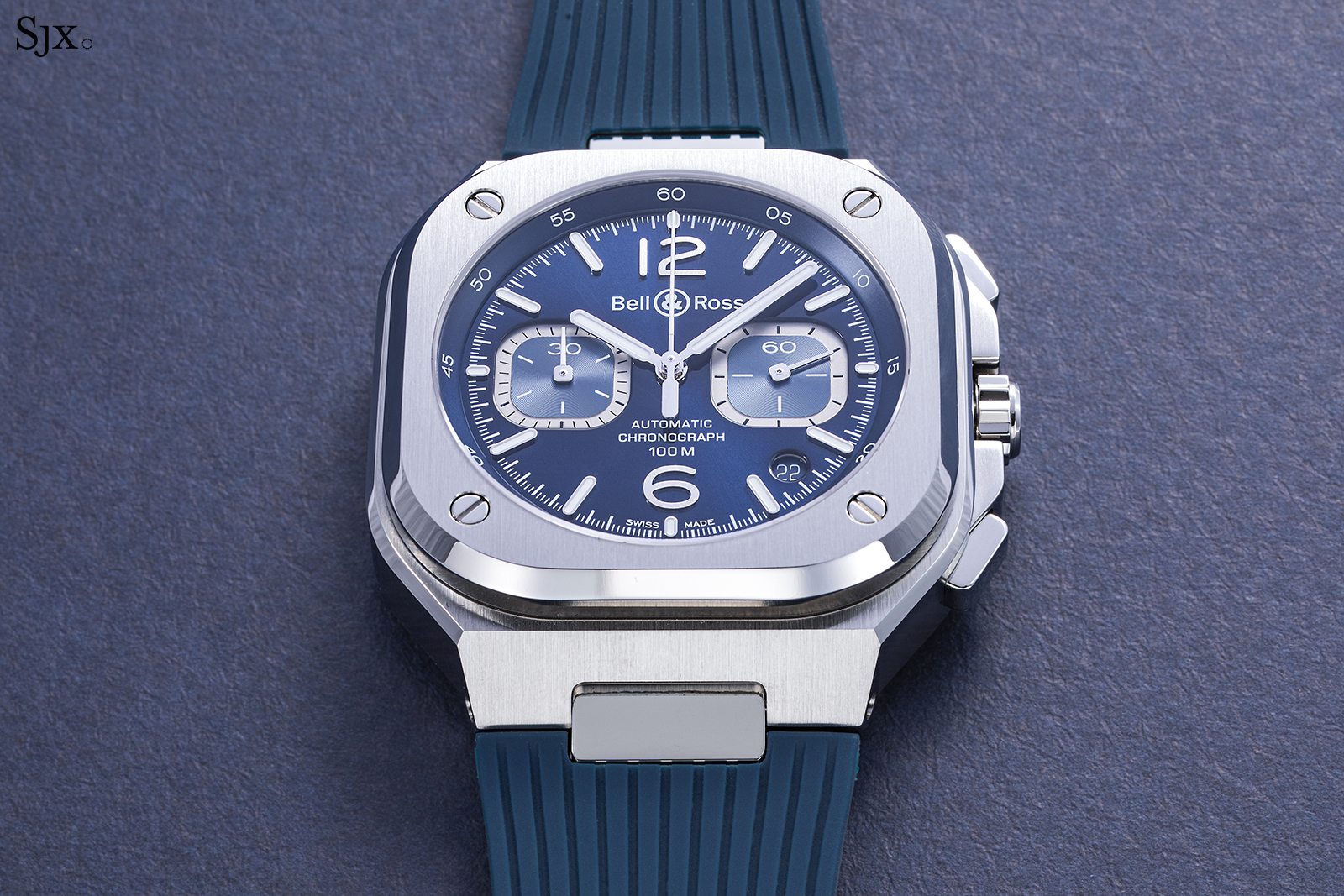 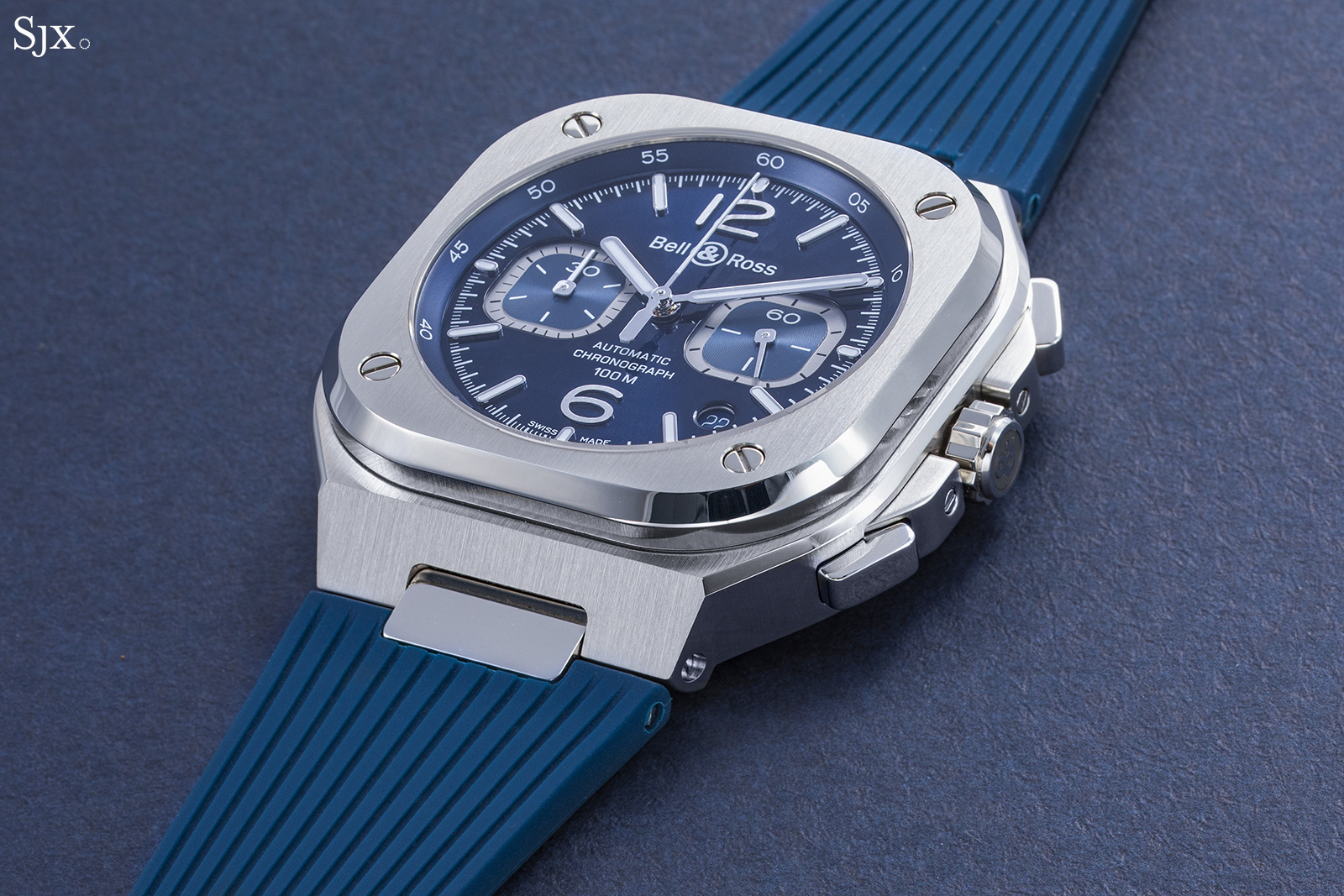 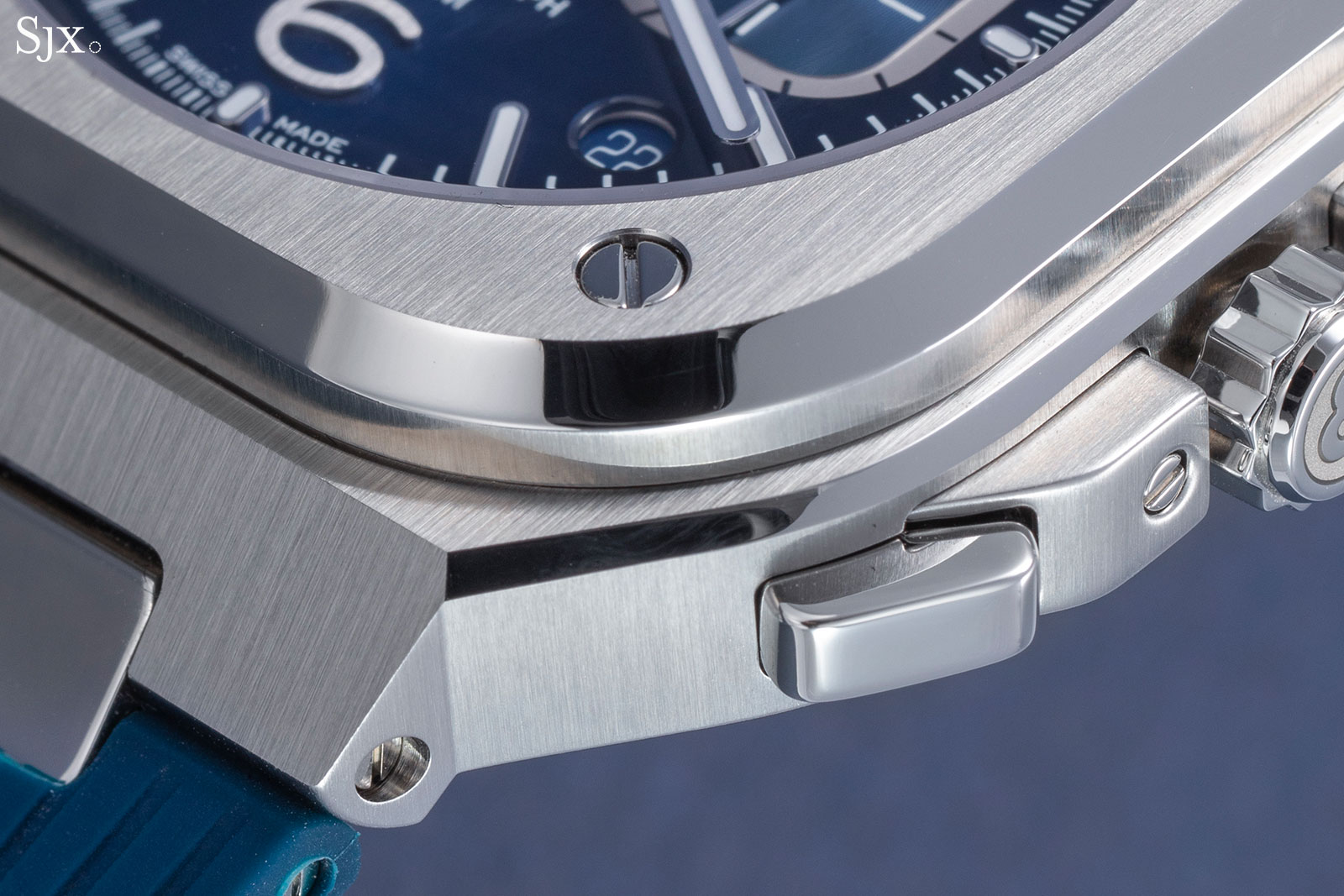 The buckle is also similarly well finished, although it is of the single-fold type, which can make a perfect fit tricky without a strap of exactly the right length. But with the correctly-sized strap, it wears well. 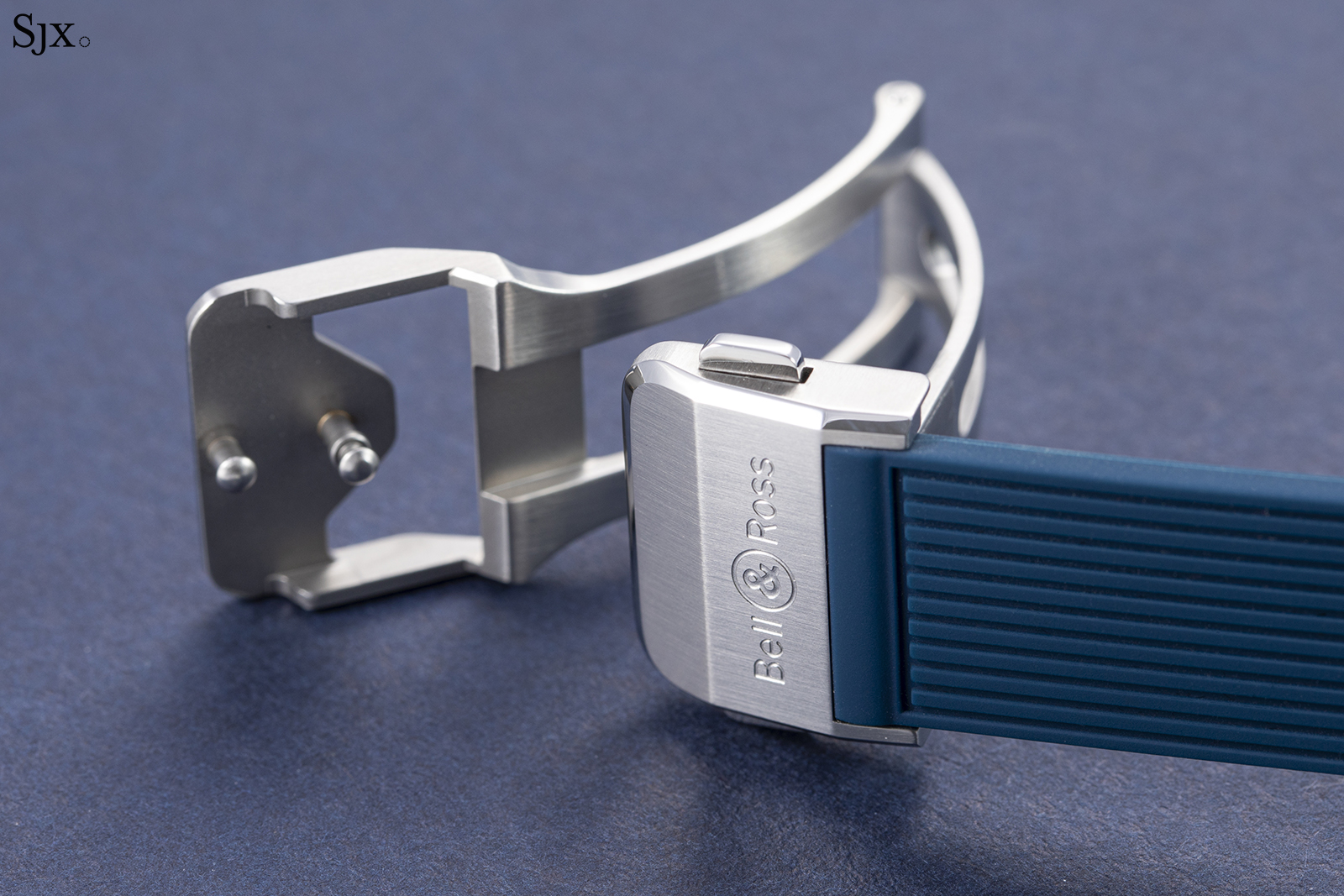 Even though the chronograph relies on the same design elements as the base-model BR 05, it has a distinct look because of the twin chronograph registers. They are square with rounded corners (a shape known as a squircle or superellipse), evoking auto-racing watches of the 1970s.

The 1970s feel is gentle and not overt as on say a Heuer Monaco. It could have been made more obvious with chunkier hands and block-shaped hour markers, but that would end the unified look of the BR 05 line up.

I would have preferred hands and markers with a bit more character; they are a bit plain on the base model, but on the chronograph the overall look is a good one. 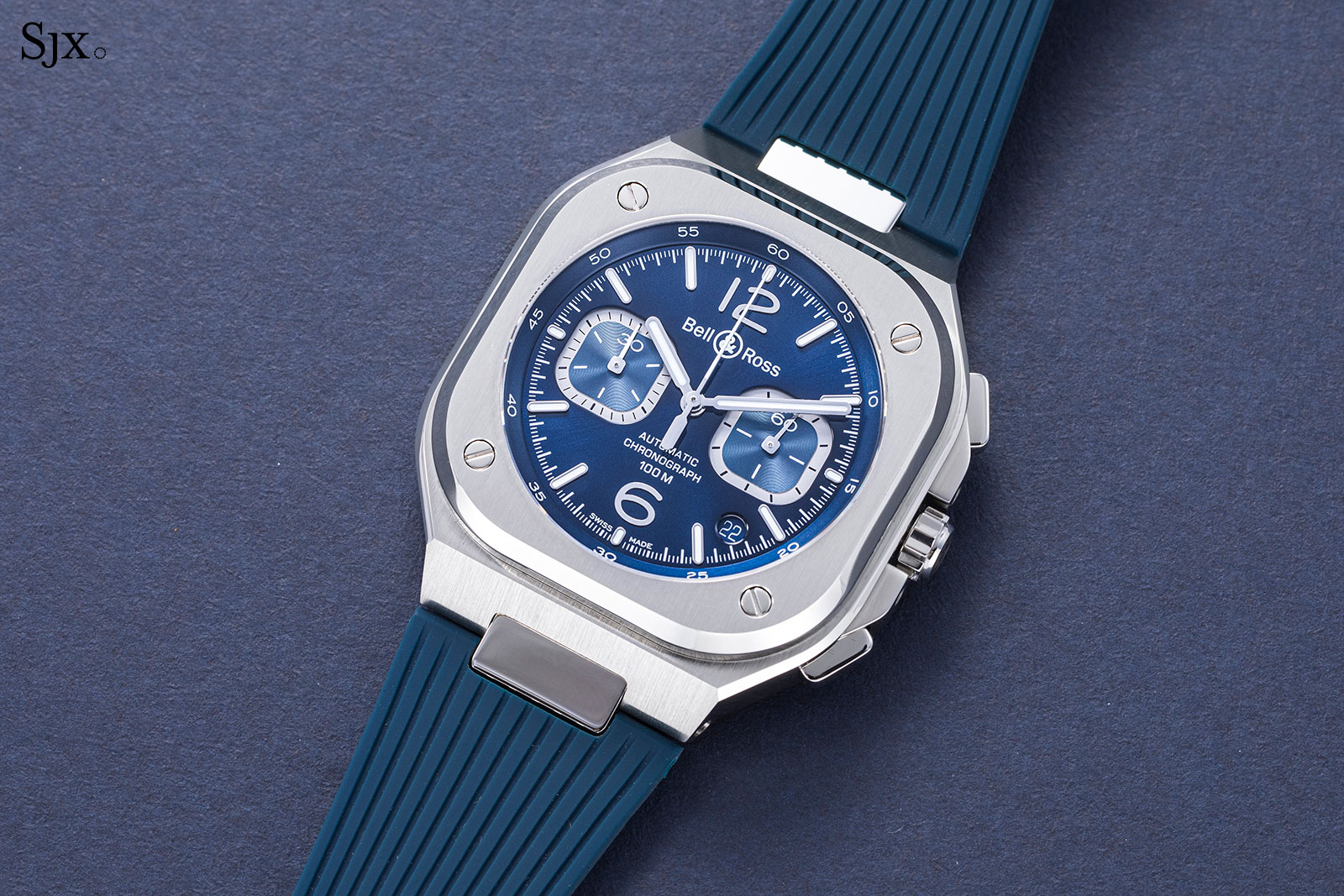 The dial is fairly simple in style but everything is well done. A detail that stands out for its thoughtfulness is the square axis for the hands on the sub-dial that echoes the shape of the register.

Both registers are actually separate discs attached to the main dial and as a result sit in a pronounced recess. The sub-dials are in a lighter colour than the main dial, something that’s more apparent on the blue dial, and finished with stamped, concentric guilloche, or azurage, as is the norm for chronograph sub-dials. 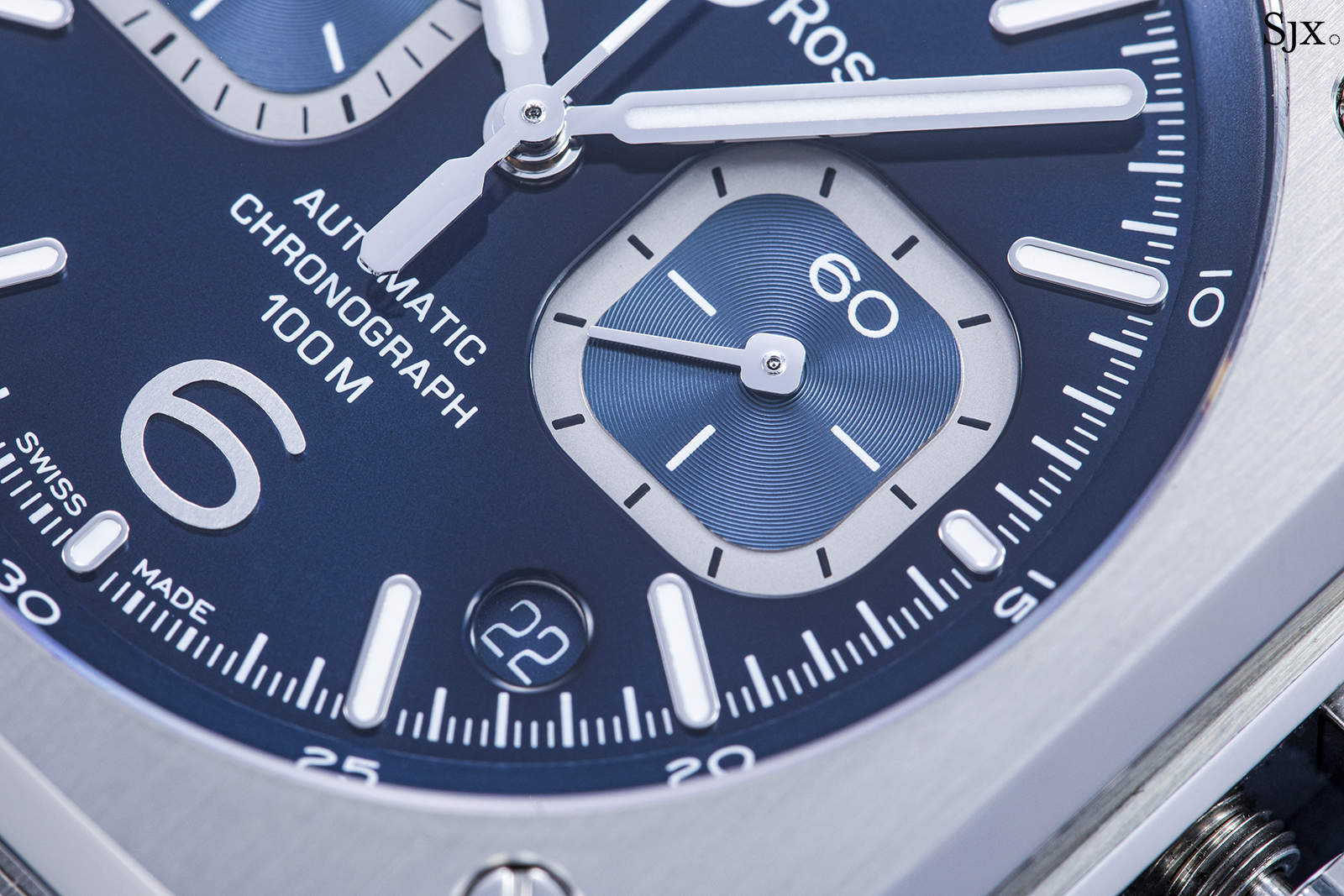 The rest of the dial is simple but similarly proficient. The hour markers are applied, and the date disc matches the colour of the dial.

As an aside, I would have preferred a more pronounced texture on the flange with a five-minute scale, which has a modest graining. 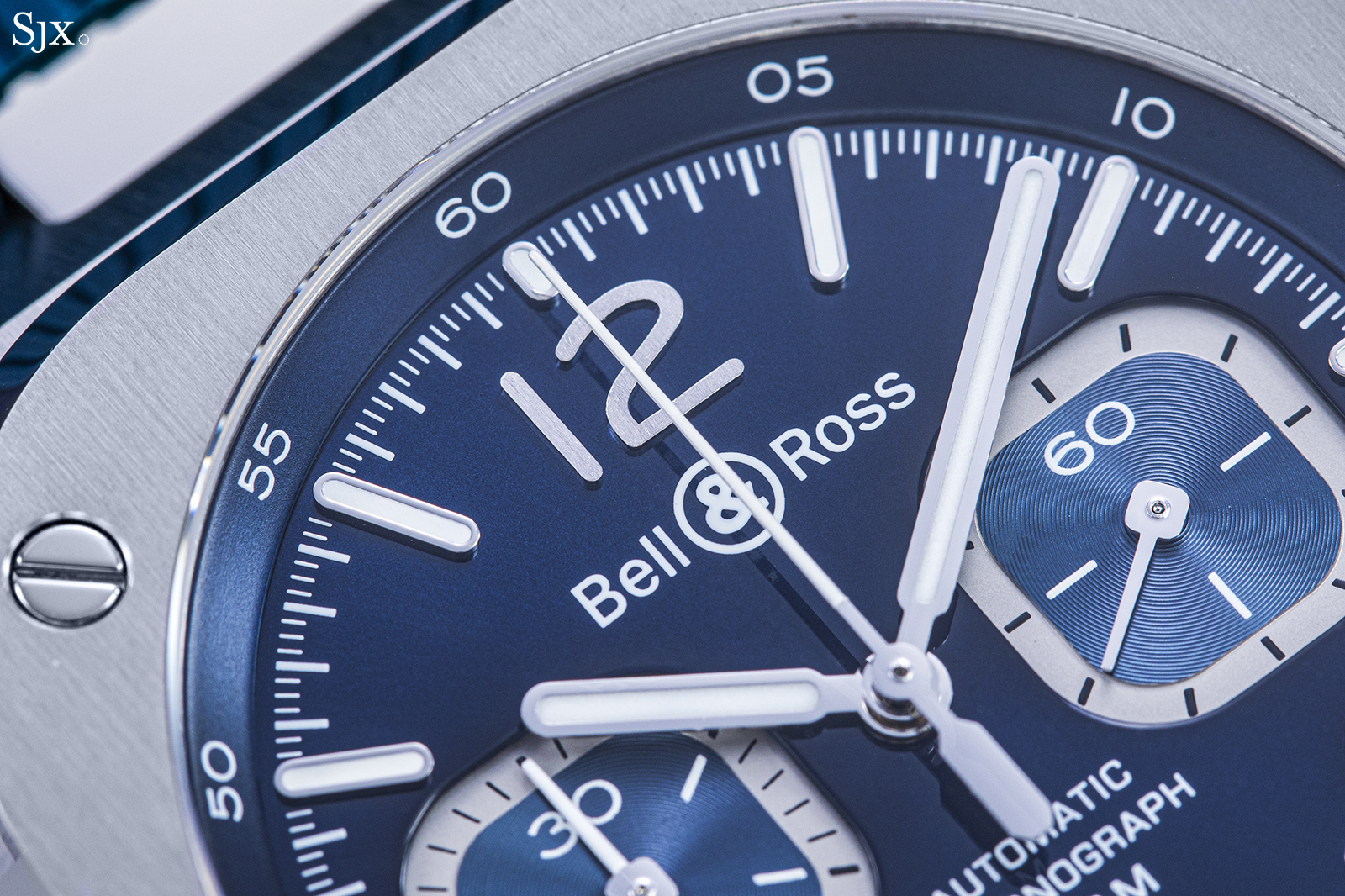 Between the two dials on offer – only black or blue is available for now – the blue is more attractive. Blue dials tend to be a bit too formulaic now – seemingly every watchmaker has a blue-dial sports watch – but it does look better here. The finish of the dial is more apparent in blue, especially for the patterned surface of the sub-dials. 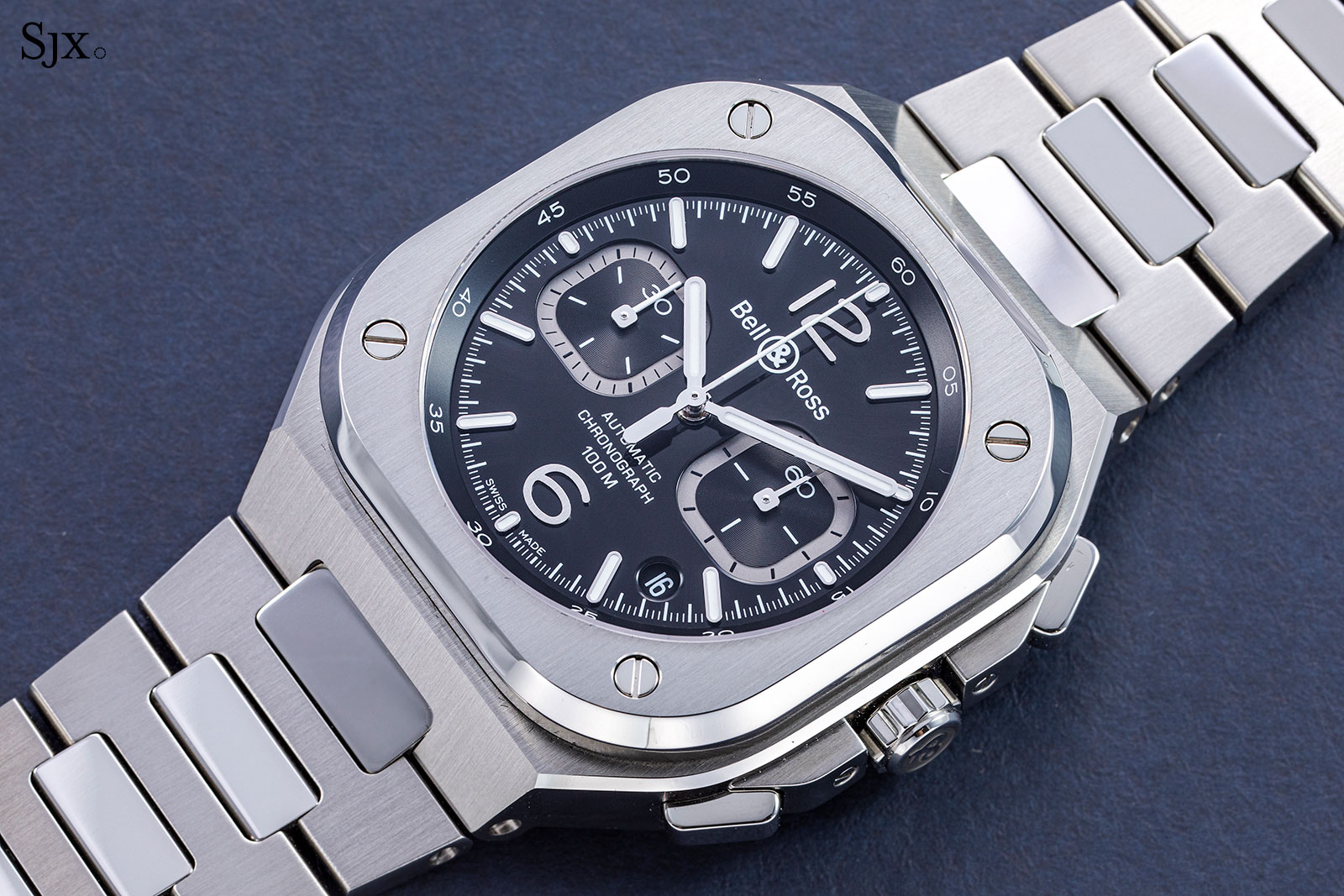 Inside is the BR-CAL.301, which is actually an ETA 2894-2 dressed up with an open-worked rotor. The large rotor camouflages the movement, although the wide central axis of the rotor gives its identity away. 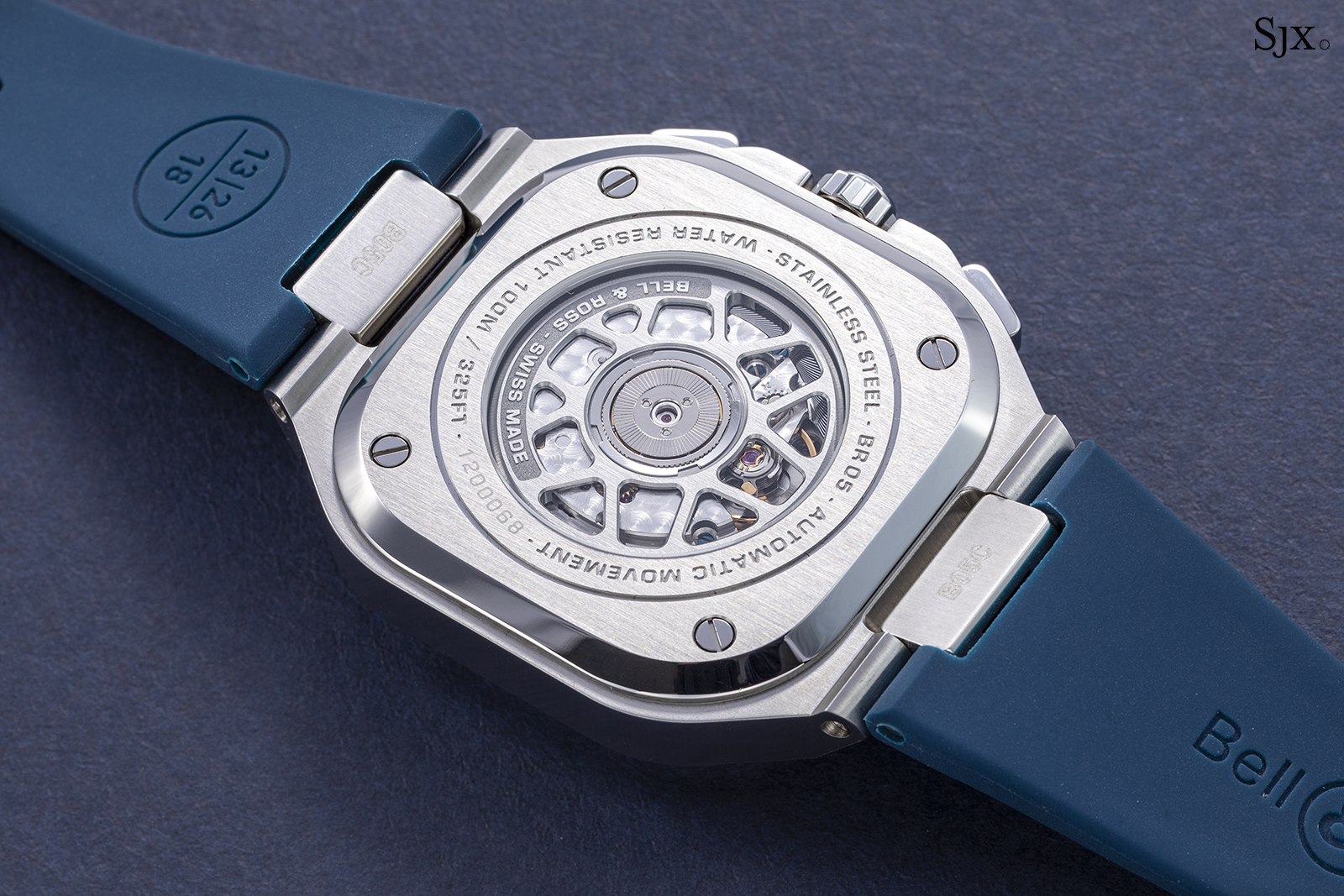 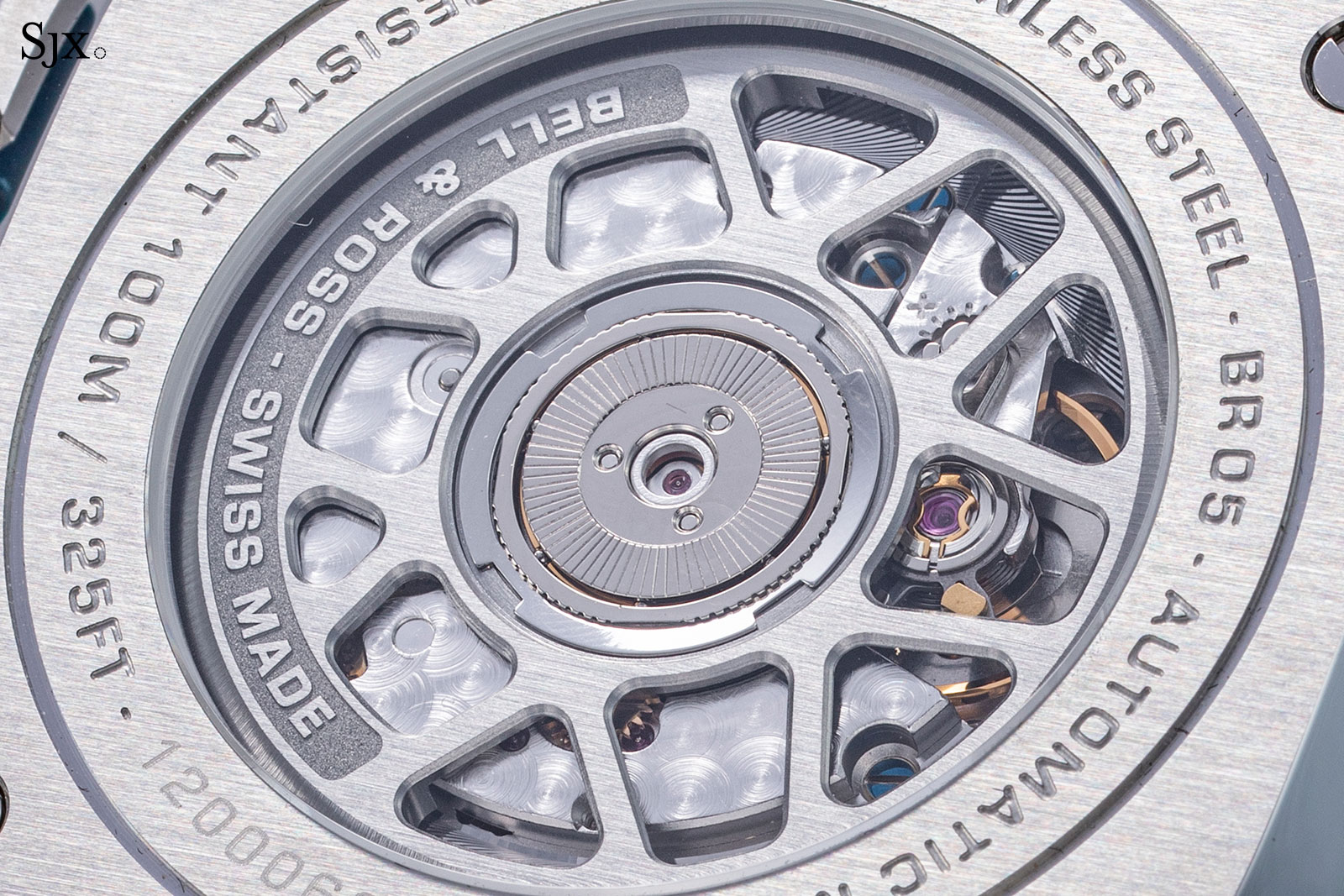 The rotor dominates the view on the back, and it is elaborately done for a straightforward movement in an accessibly priced watch. It’s a full oscillating weight that covers the entire movement, which Bell & Ross labels a “360 degree” rotor, with one half of its rim being thicker and heavier.

Made of tungsten, it is entirely open worked and has the brand logo cast in relief. The top is brushed while all of the edges of the open working are bevelled. The finishing is no doubt done by machine, but it is neatly done and visually appealing. The same holds for the movement itself, which is an upper-grade ETA movement with perlage and blued screws. 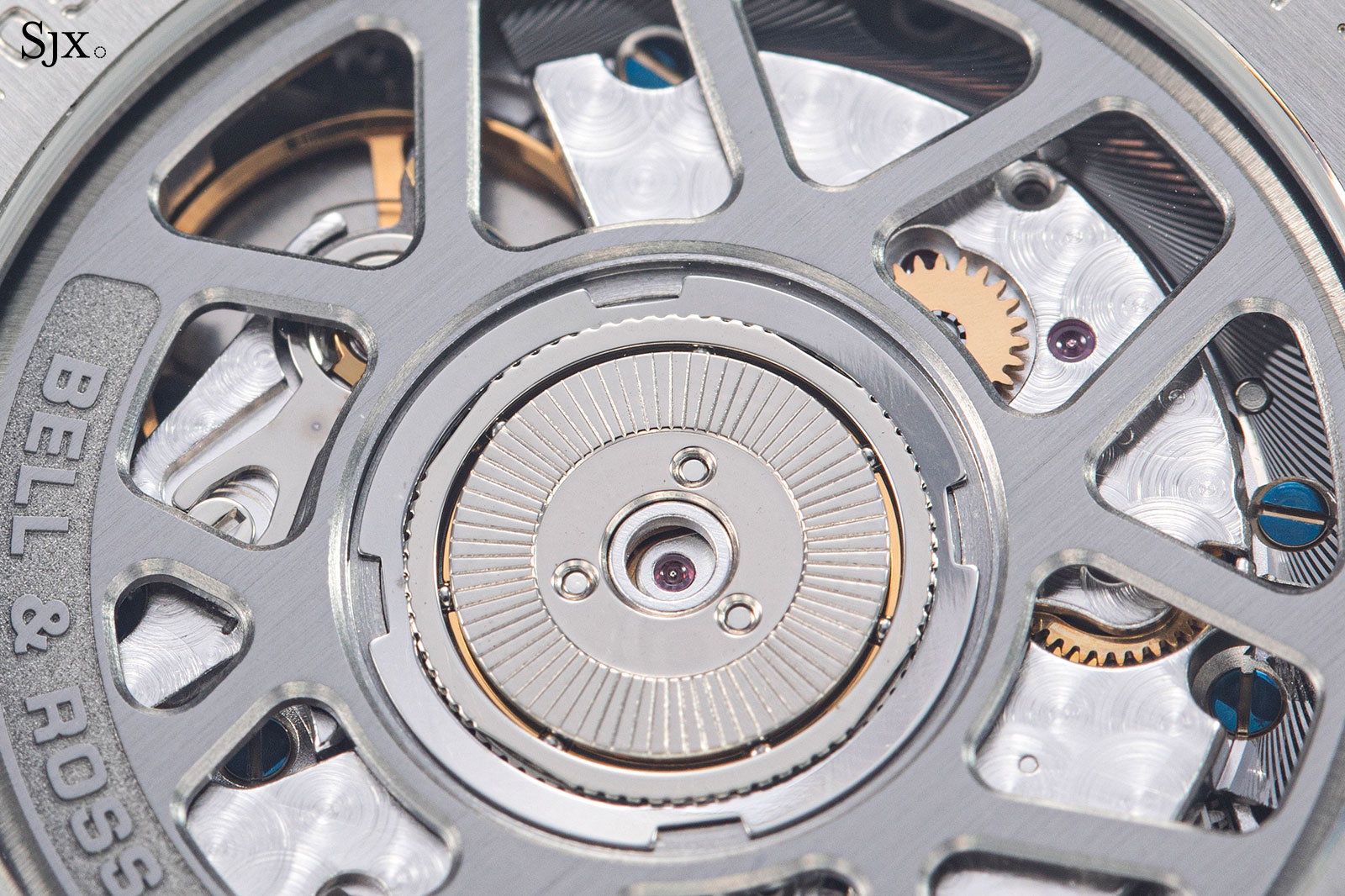 A weakness of the ETA 2894 is its modular nature, which means none of the chronograph mechanism is visible on the back, making it less interesting visually. But the choice of the movement is understandable given its slimness.

The ETA 2894 has the advantage of being relatively thin at 6.1 mm high, as compared to the 7.9 mm of the Valjoux 7750. A thicker movement would have resulted in a thicker case, which would probably be overly chunky. 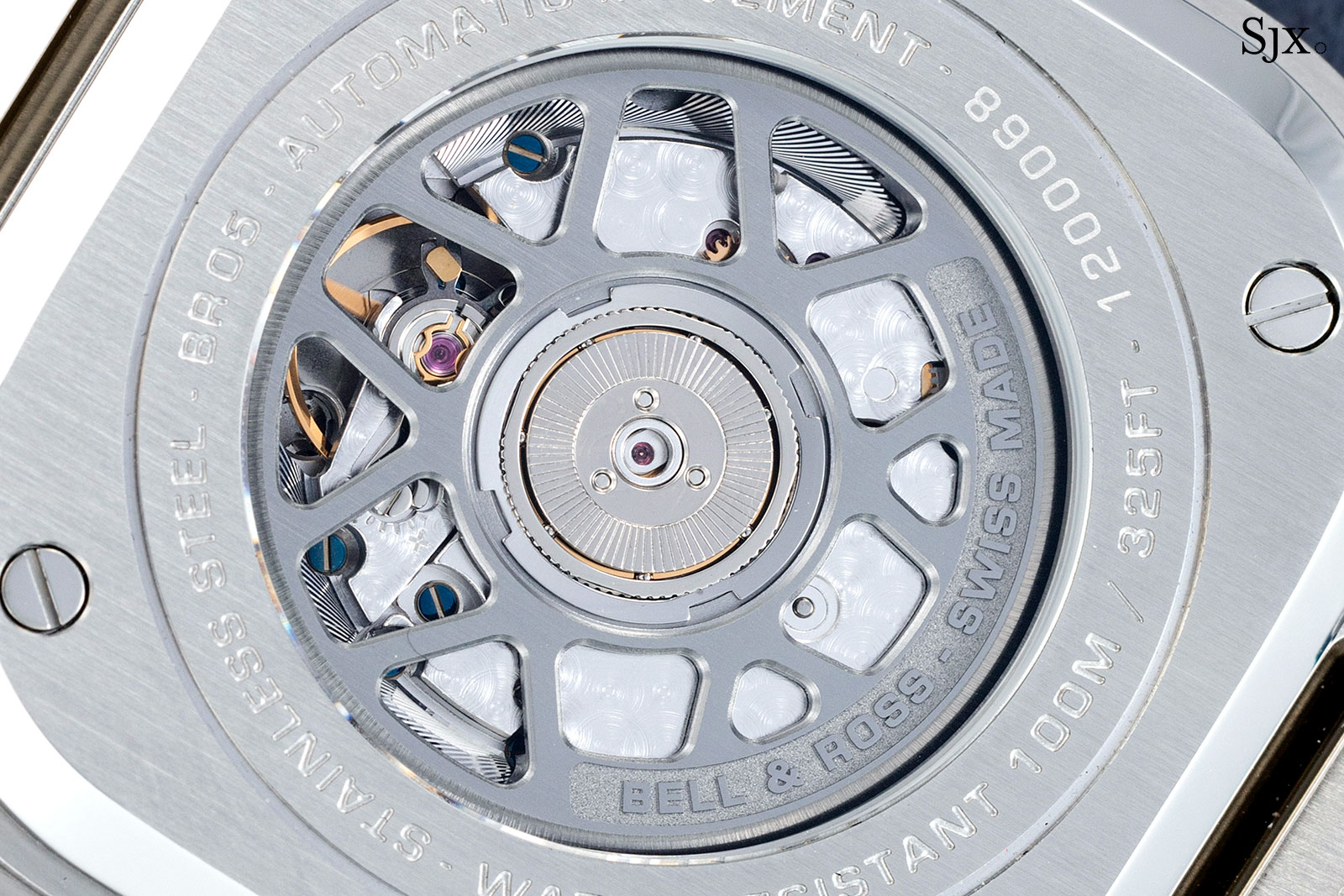 With a 1970s style that looks good, the BR 05 Chrono is fairly priced and well executed, with the case being particularly worthy of praise – it is well finished and unusually slim. The movement isn’t the most interesting, but it is reliable and contributes to the thinness of the watch.

The BR 05 Chrono is only available in two guises for now, which is limiting. It seems ripe for variations, particularly with lighter case materials – titanium for instance is lightweight but able to be finished similarly – which would be interesting, if combined with a pronounced, 1970s retro dial.