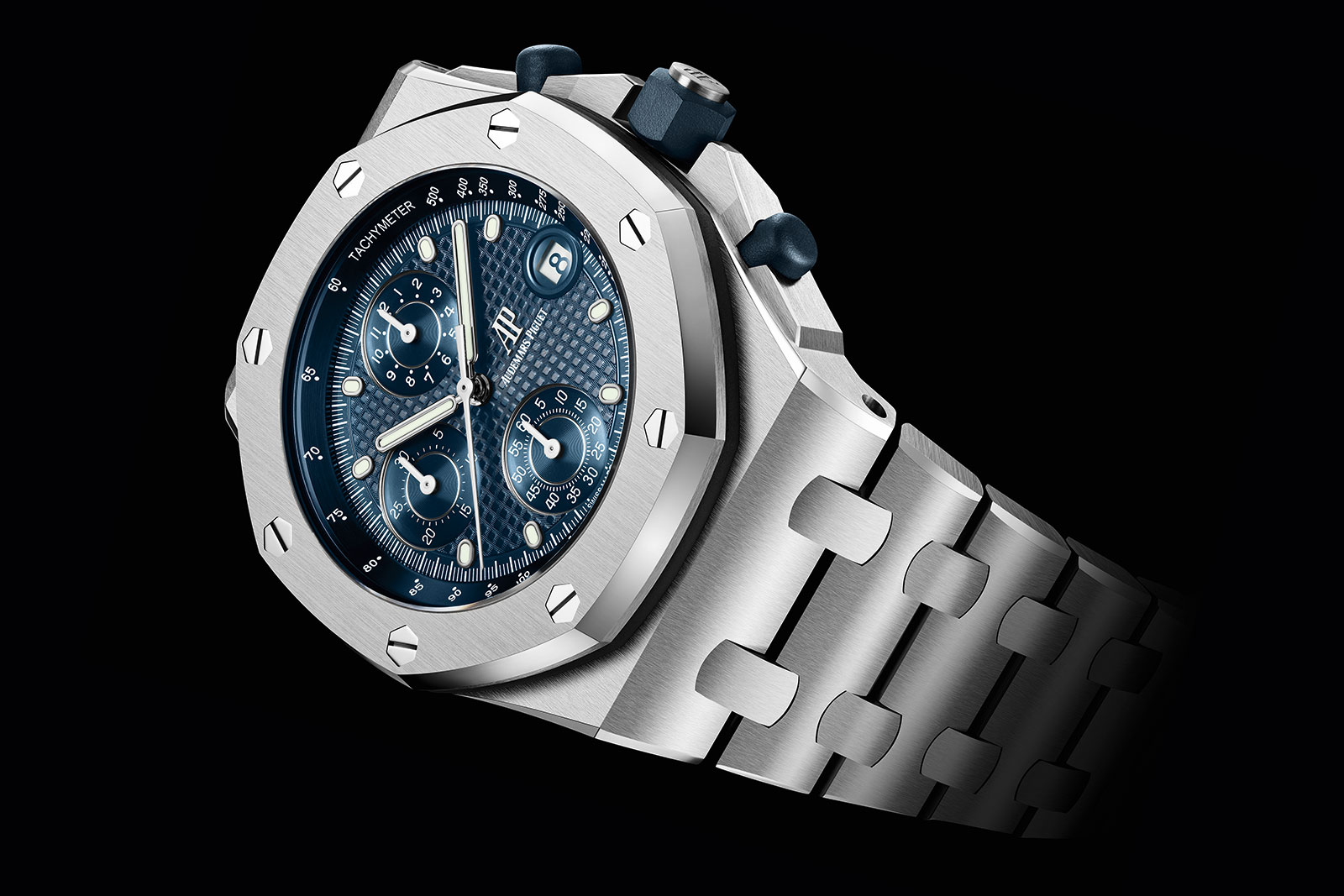 One of the biggest watches on the market when it was introduced in 1993, the Royal Oak Offshore is a landmark in the oversized-sports watch genre. Since then the model has been iterated into numerous variants and several sizes, while the first-generation originals have occasionally returned as limited editions. Now they are back for good as part of the regular collection at Audemars Piguet – but upgraded with the in-house cal. 4404 as well as quick-release bracelets and straps.

Nicknamed “evolution” by Audemars Piguet (AP), the new Royal Oak Offshore Chronograph 42 mm ref. 26238TI is being launched with a trio of watches that are a faithful take on the 1993 original, along with two new “Mega Tapisserie” dials in the same size. 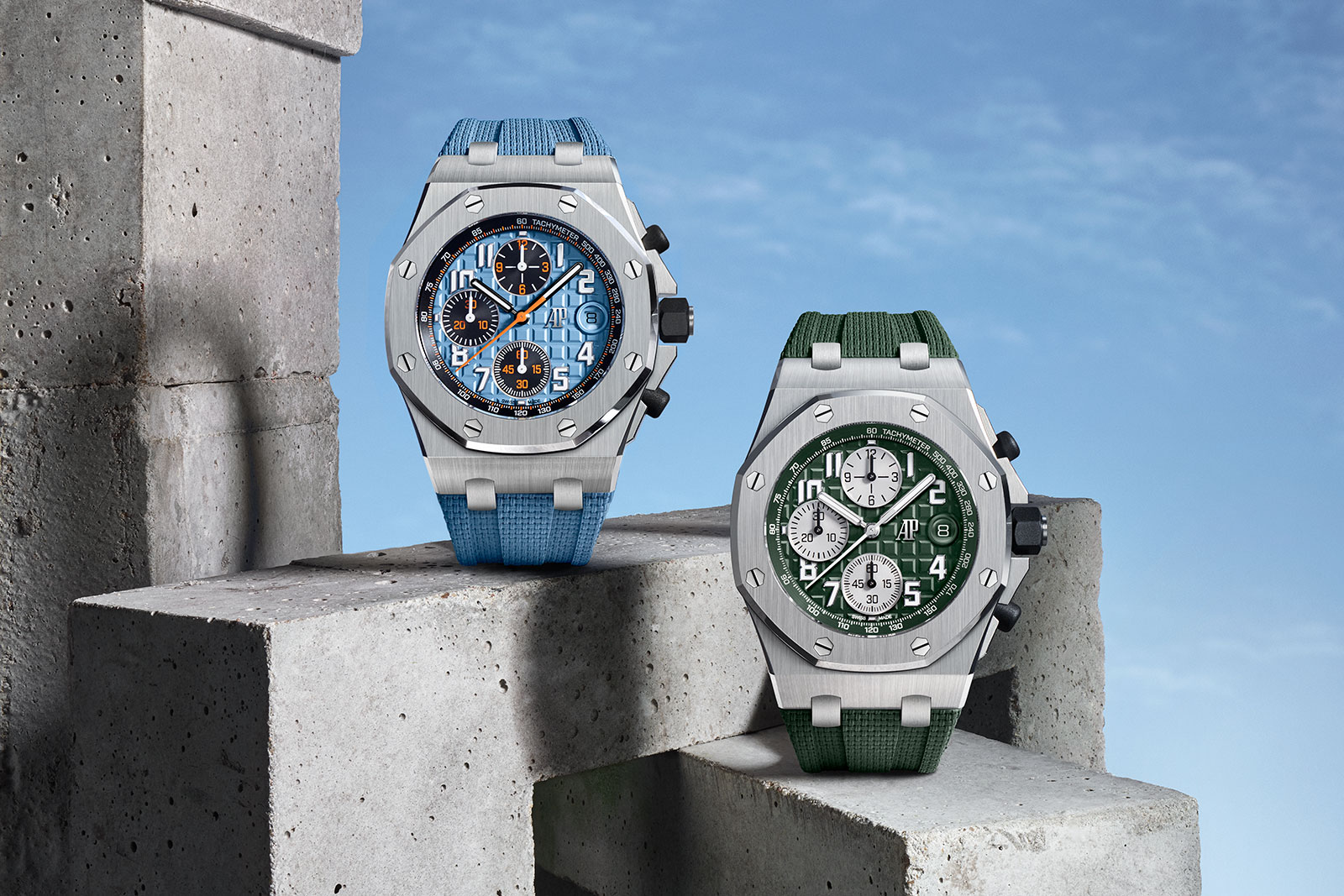 The last major revamp of the Offshore Chronograph 42 mm was in 2014, when it received a movement upgrade in the form of an in-house base movement, though retaining the modular chronograph. And then two years ago Audemars Piguet unveiled a model equipped with the Frederic Piguet cal. 1185.

The new Offshore is arguably better than all its recent counterparts, because it combines the original design – which is a classic – while improving what needed to be improved, namely the movement.

In the release announcement, AP describes the movement as “a new selfwinding integrated chronograph, Calibre 4404, equipped with column wheel and flyback function”, which pretty much sums it up.

Add to that the new lug attachment with an quick-release mechanism built into the straps and bracelets, and the new Offshore is spot on. If you like the original Offshore design, as I do, then it doesn’t get any better than this from a technical perspective. 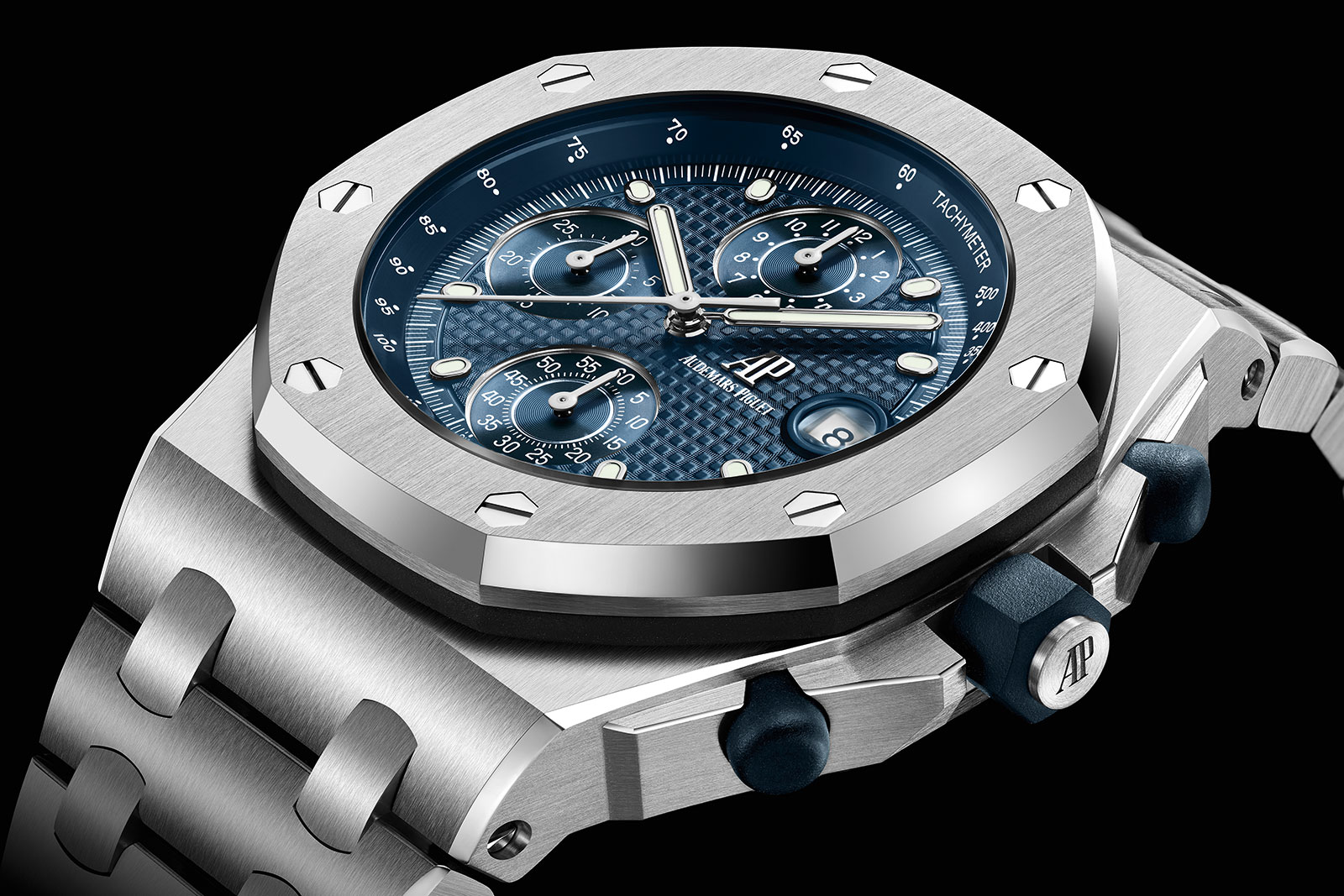 Unlike the original that had a solid back, the new Offshores sport an open back that reveals the cal. 4404. A variant of the cal. 4401 found in the [Re]master and Royal Oak chronographs with a “Compax” layout, the cal. 4404 is essentially the same thing but with the chronograph registers repositioned to suit the traditional six, nine, and 12 layout of the Offshore.

Being a recently-developed movement, the cal. 4404 is high spec, with all of the features expected in a modern, high-end chronograph calibre. It has a column wheel and vertical clutch for the chronograph, while the balance is free-sprung. 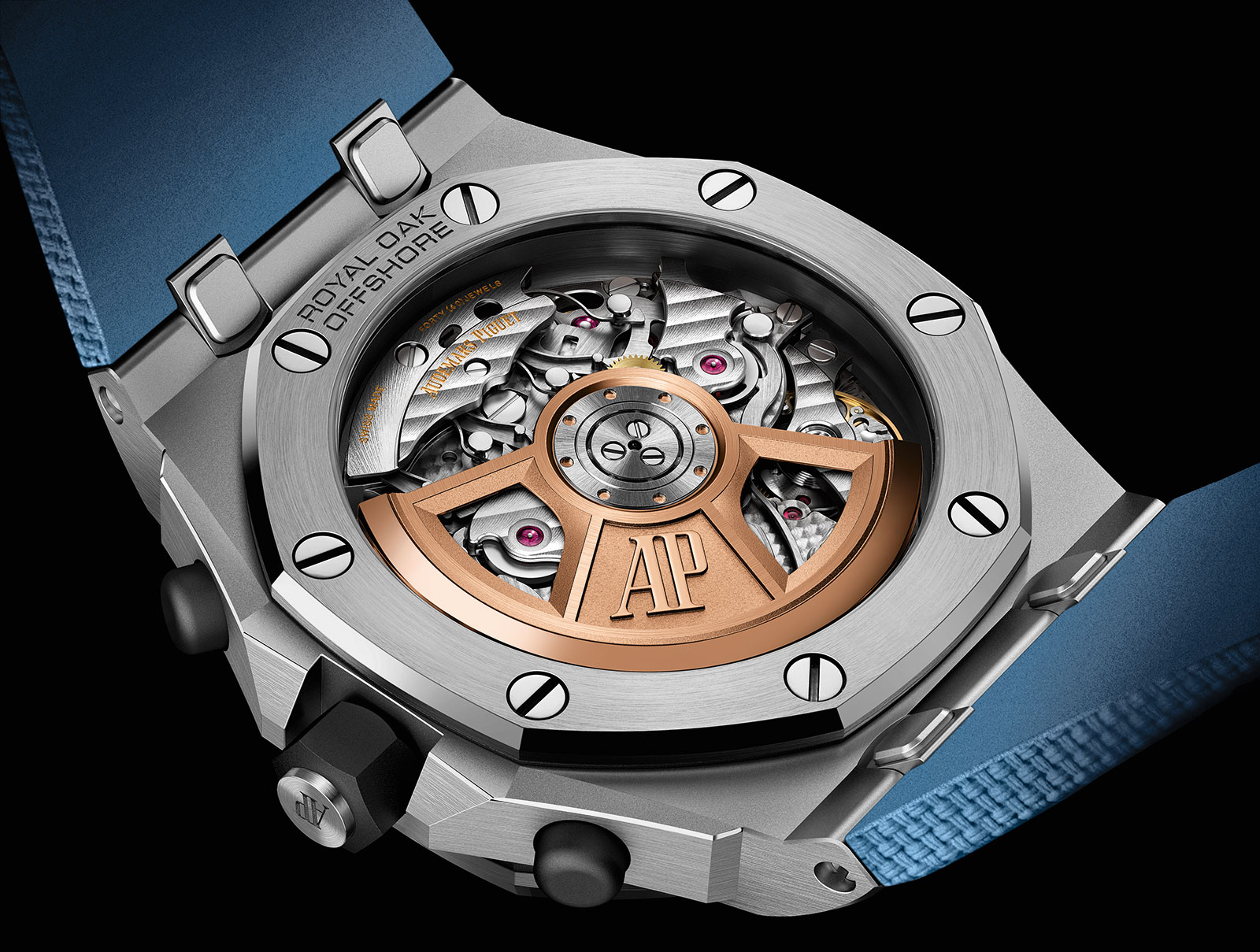 The Royal Oak Offshore “Evolution” is led by a trio modelled on the first-generation watches, with modest tweaks. The overall design has been preserved, as have several details that define the original, including signature synthetic-rubber covering for the crown and pushers, as well as the date magnifier built into the dial.

Ironically, the new in-house movement makes that unnecessary since the date sits close to the dial. In contrast, the modular movement of the original meant the date sat deep down due to the thickness of the chronograph mechanism. 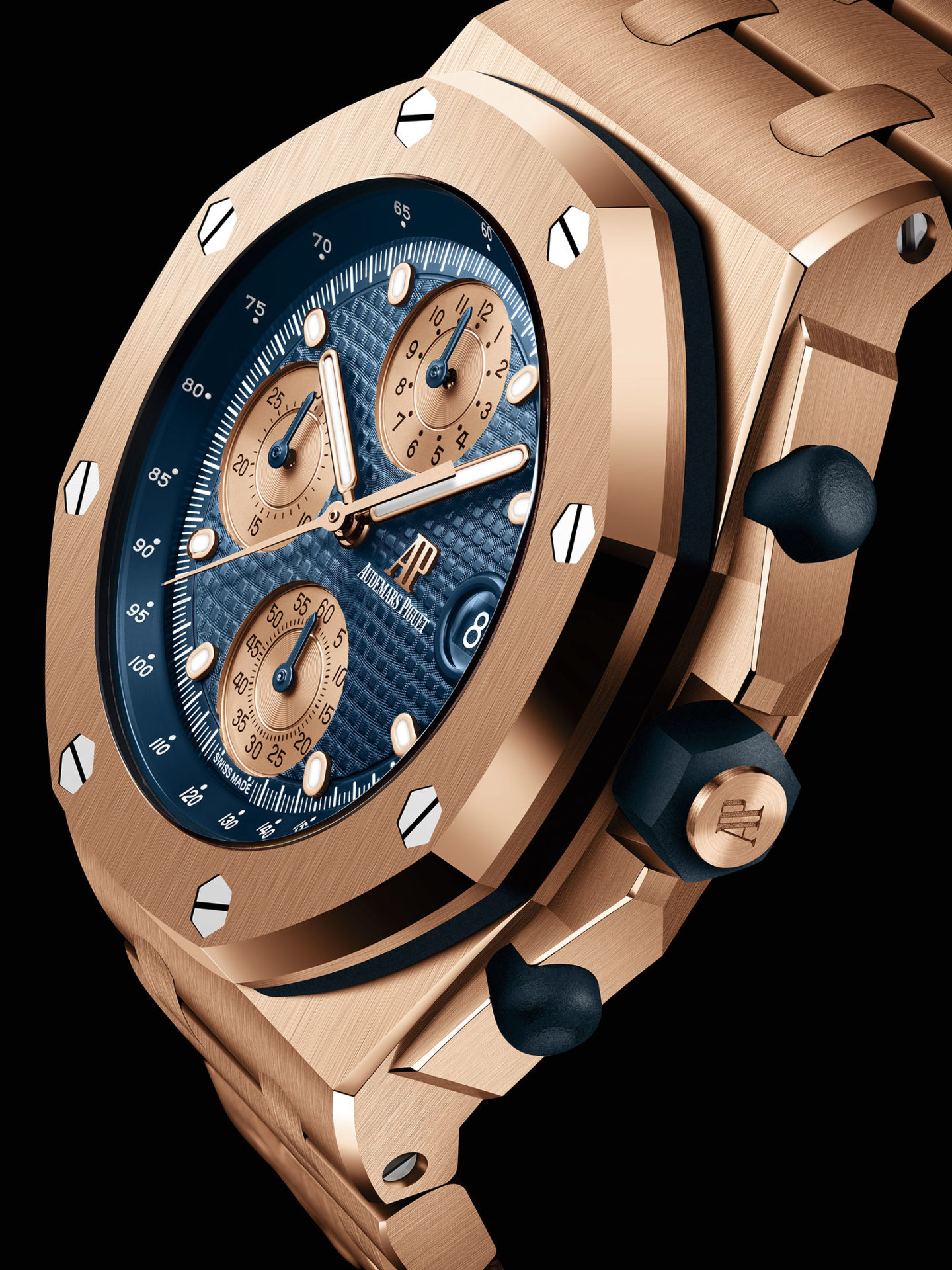 Another adjustment is the logo at three o’clock, which is now more compact than on the original

One of the most obvious differences between the new model and the original are the transposed chronograph registers at six and 12 o’clock. Here the hours are at 12 o’clock and seconds at six, and on the original the positions were inverted.

A less apparent change is the relative positions of the registers, all of which now sit at the same distance from the central axis. In contrast, the original had the 12 o’clock register sitting closer to the hands, a consequence of the chronograph module’s construction.

In terms of feel in the hand, the new Offshores should be nearly identical to the original versions, because the dimensions are nearly unchanged. At 42 mm wide and 15.2 mm high, the new model has the same diameter and is only marginally thicker, with the increased height due to the display back. The version in titanium with a dark grey dial

The steel version is the closest to the 1993 original, while the other two are variants of first-generation models.

Like its predecessor, the titanium model has a grey dial, except it’s now matched with the registers and tachymetric scale in black, instead of dark blue as on the original.

And the pink gold version with its blue dial takes after an early Offshore that was in yellow gold. 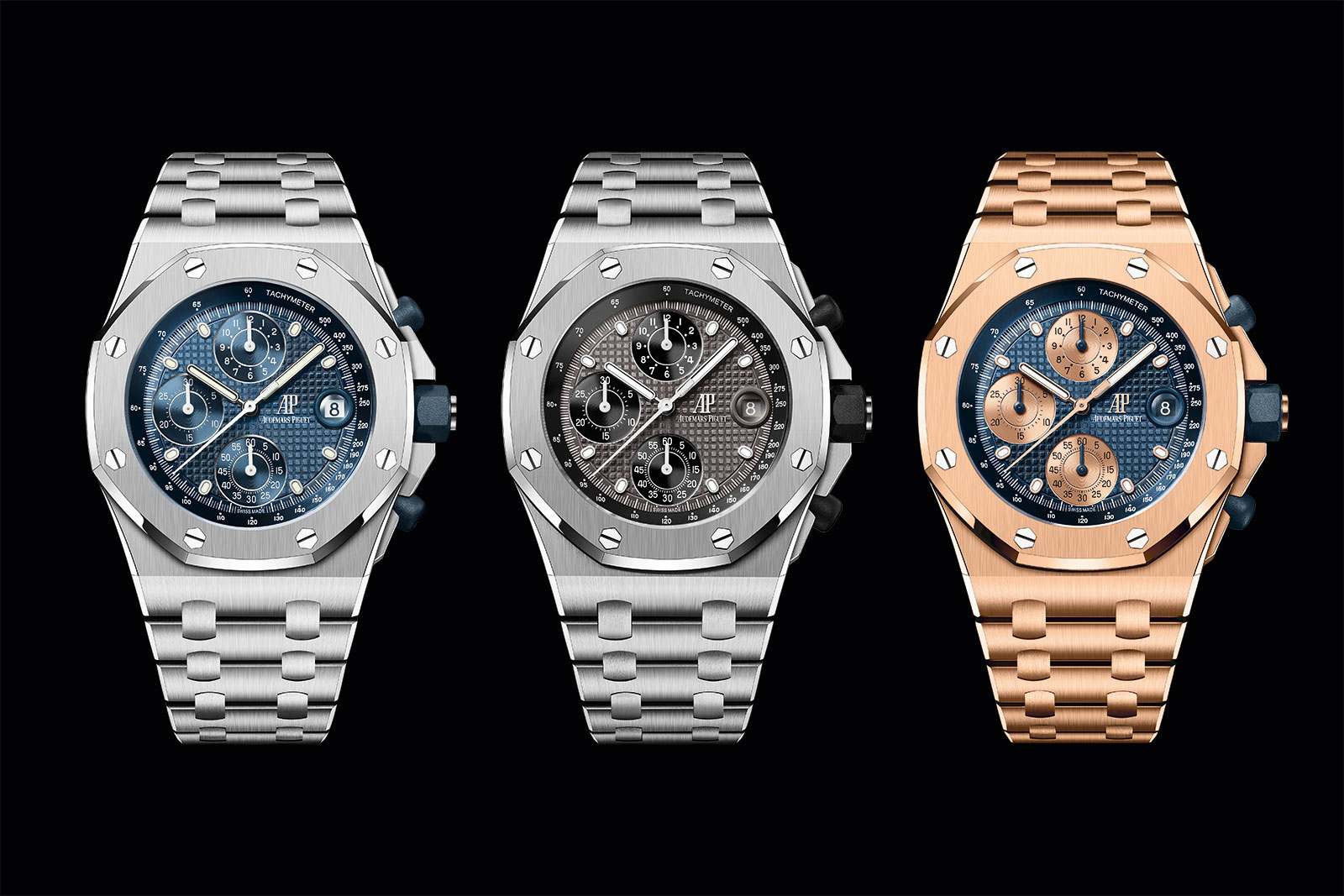 But the new Offshores are not merely historical remakes. The line up also includes a pair with “Mega Tapisserie” dials, featuring the extra-large chequerboard pattern and Arabic numerals synonymous with later-generation Offshores. These share the same specs as the “Evolution” models, but with decidedly more modern dials. 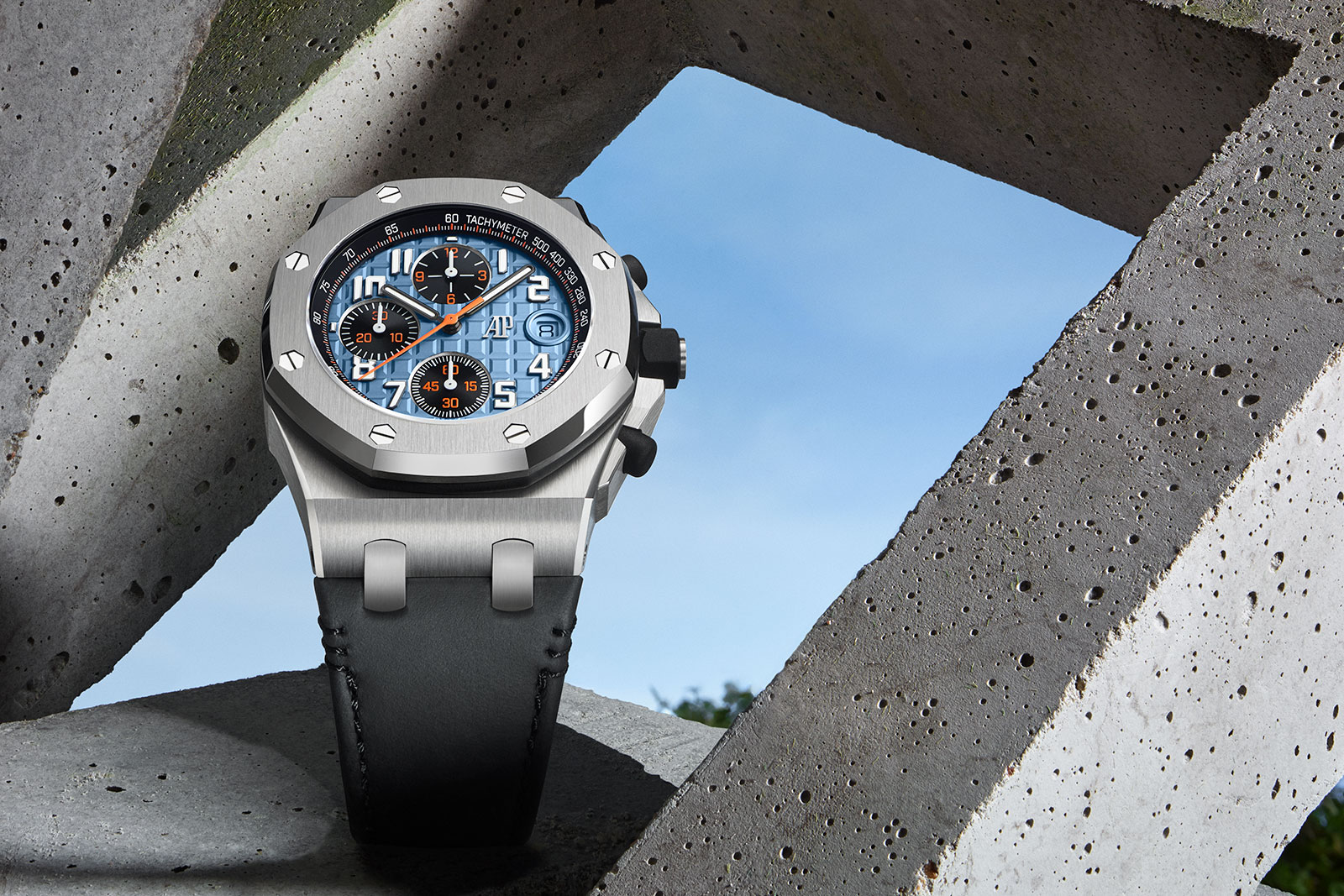 Steel with a blue dial

Available in either titanium or steel, they are each delivered with a pair of straps, as opposed to a strap and bracelet as the “Evolution” Offshores are. 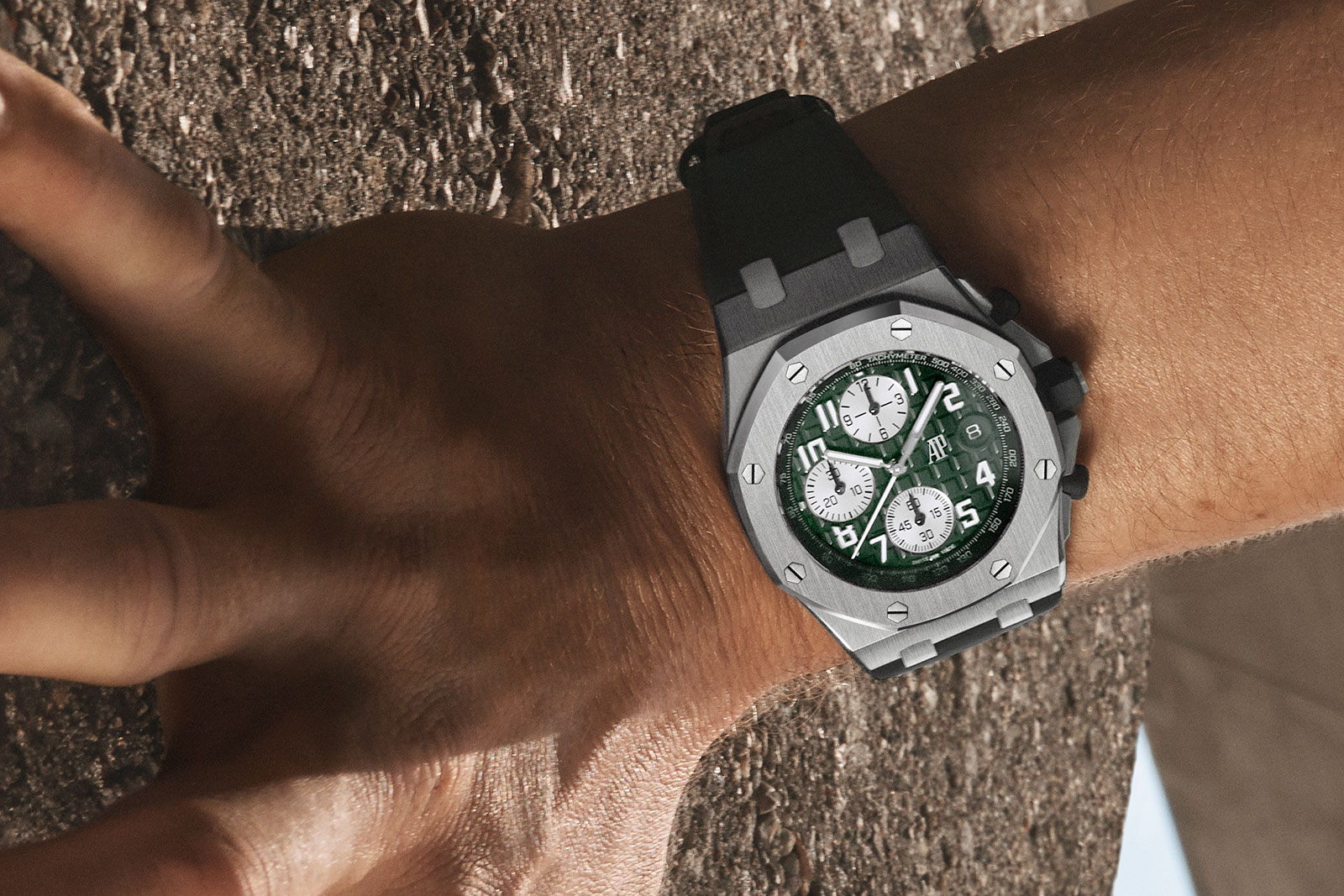