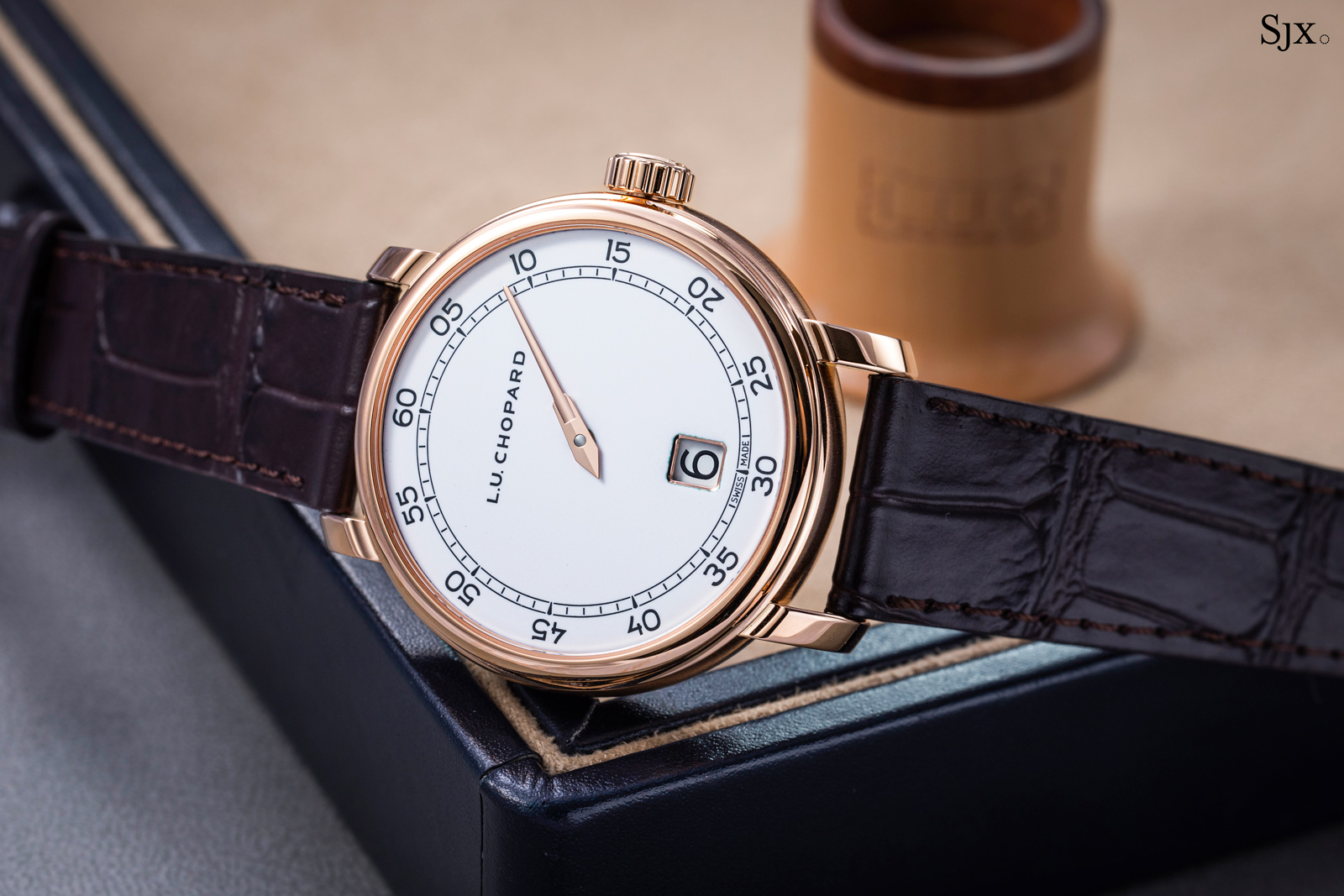 Twenty-five years ago Chopard debuted the L.U.C line alongside its then-new Fleurier manufacture. Namely after the initials of its founder, the L.U.C range is primarily composed of classically-styled watches with notably fine in-house movements.

To mark the 25th anniversary of L.U.C, Chopard has unveiled a classically-styled watch with notably fine in-house movement, the L.U.C Quattro Spirit 25. Though the Quattro Spirit 25 is the brand’s first-ever jump hour wristwatch, it is powered by the longstanding eight-day, hand-wind movement that’s almost as old as the L.U.C line itself. Though moderately sized, the watch feels relatively tall, in part due to the smallish diameter of 40 mm. The convex, vertical case dials and short lugs also contribute to the perception of size. On the subject of the lugs, they are the only major element of the watch I would change. They short, narrow, and don’t quite match the elegant style of the watch.

The dial, on the other hand, is best described as functional elegance. Bright white and expansive, the dial is clean and perhaps a bit too stark, but it is strongly legible. At the same time, the quality of the enamel is obvious and adds to the appeal. 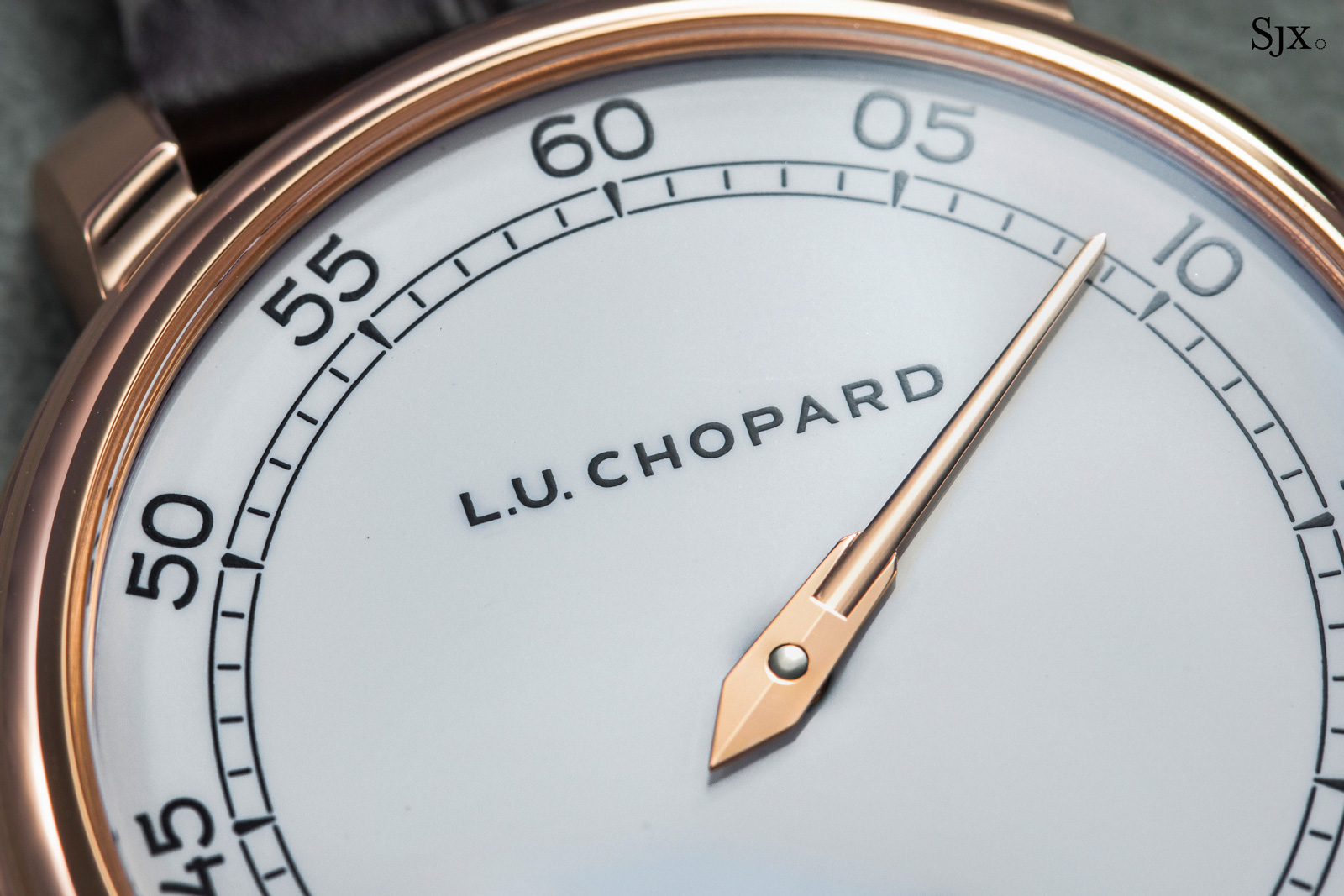 The Quattro Spirit 25 is unquestionably a high-quality watch in both finish and construction. And surprisingly for a watch in this price range from an establishment brand, it is also a value proposition.

The Quattro Spirit 25 costs a bit under US$45,000 – a value buy considering everything that it has, namely a fired enamel dial, eight-day movement, as well as a jumping hours. The same combination of complications from brands with comparable quality – Patek Philippe and Vacheron Constantin come to mind – would cost at least double. Like the rest of the watch, the 18k rose gold case is done well. While the quality is beyond reproach, the design could have been better in my estimation.

It’s actually a relatively compact watch at 40 mm wide and 10.3 mm high, but the specifics of the design make it seem larger. The narrow bezel and wide, empty dial make it seem wider, which is a good thing. But the case also seems thicker than it is. It’s not a thick watch at all, but the proportions make it seem so, which takes away from its refined appearance. That’s likely due to the flat bezel, tall case middle, and short lugs. Still, the quality of the case is excellent. And it feels good; despite the size, the case is solid and hefty.

Though the case is simple in form, it is executed well with good details. Both the stepped bezel and tops of the lugs are polished, while the sides of the case are finely brushed.

Still, a new set of lugs – something more refined with a chamfered edge – would take it to another level. Finished in white enamel with black enamel print, the dial was initially plain for me – too flat and too white. But it quickly becomes clear that its a thoughtful design that is functional and appealing.

For one, the balance and layout is perfect. The symmetry, for one, is obvious, but that’s often a given with jump hours, so not so much of an achievement. More impressive is the size of the hour display. Thanks to an extra-large hours disc, the display is unusual in size, which makes for good proportions and readability. At the same time, the design also scores well in its details. The hour numeral is framed in gold, while the minute numerals are rendered in an elegant serif font that’s matched with arrowhead five-minute markers on the minute track.

Perhaps the only bit of the design that doesn’t quite match is the minute hand. Made of two parts, it’s done in the same style as most other L.U.C models. But as in the other models, the hand feels unnecessarily fussy. Something streamlined would have gone better with the dial design. Interestingly, the dial is done in-house, instead of being outsourced as is the norm for most fired enamel dials. Though the dial is of Chopard’s own, the quality appears as good as that of the best specialist suppliers. The dial is glossy and smooth, with minimal imperfections like bubbles or spots. In fact, the only flaw discernible on the example I looked at (and also faintly visible in the press images) is a darkening of the enamel around the gold frame for the hour display. I expect that stems from the metal frame – perhaps a chemical reaction of sorts – but it is minor enough to be invisible on the wrist. Even at high magnification it is faint. The L.U.C 98.06-L is descended from the cal. 1.98 launched in 2000 as one of the earliest L.U.C calibres. Its layout and aesthetics instantly reveal its primary feature – a long power reserve.

Though its aesthetics don’t have the appeal of other L.U.C movements – just because there isn’t much to see – the L.U.C 98.06-L remains an impressively high-quality calibre both in terms of construction and finish.

A pair of stacked barrels are visible under the even larger barrel bridge that occupies almost two-thirds of the movement’s volume. Tucked away to one side, the balance wheel is relatively small, and next to it is the bridge for the going train. The pair of stacked barrels comprise four mainsprings – each stack is made up of two barrels, on over the other. All four barrels are driven in series, which means they unwind one after another. The two stacks are connected via an intermediate wheel on the main plate that’s entirely hidden by the barrel bridge, without even a jewel bearing or pivot to reveal its position.

Arranging barrels in series doesn’t increase the energy they deliver, but it effectively increases the number of cumulative turns as the barrels unwind. Each barrel has enough torque to unwind and power the going train for two days, thus having the four barrels unwinding in series results in the lengthy power reserve of eight days. The layout of four barrels – two stacks of twin barrels

Meanwhile, the going train is entirely supported by a bridge on the lower half of the movement. And here lies one of the quirks of the movement: the centre wheel that drives the minutes hand is driven indirectly via an intermediate wheel.

While most movements have the barrel directly drive the centre wheel, the barrels in the L.U.C 98.06-L rotate in the opposite direction compared to convention. Thus, the intermediate wheel ensures that the minute hand rotates in the correct, clockwise direction. Being the only one connected to the going train, the uppermost barrel on the right is the gateway through which the other barrels deliver energy to the movement as they unwind one after another

With most of the moving parts under bridges, there isn’t much mechanical detail to be admired. But up close the finishing is great, as is typical for the high-end L.U.C movements. It’s a mix of hand- and machine-applied decoration, but uniformly superb. The Geneva stripes on the bridges are neat and lustrous, while details like countersinks and anglage are all present.

The anglage, or chamfered edges, are a good illustration of the overall finish quality. With its characteristic flat surface, the anglage is clearly milled by machine in the initial step, but the edges are then polished by hand, probably with a tiny rotary polisher, in order to remove the milling marks and create a smooth, mirrored bevel. The lettering on the bridges is stamped, instead of engraved, which results in some unevenness One of the outstanding details is the regulator index that’s both black polished and bevelled. At the same time, notice the countersinks for the screws and jewels in the escape wheel bridge below the balance

Although the under-dial mechanics were not visible in the watch I looked at, Chopard has released photos of the movement with the dial removed.

Even though the bits are hidden, the jump hours mechanism is as well finished as the exposed parts on the back, reflecting the quality of work. The steel lever, for instance, is straight grained on top while having polished, bevelled edge. Also worth noting is the perlage on the plate. Though the design tweaks could make the watch much better, it is already an objectively excellent timepiece that is fairly priced. In fired enamel and gold.